This serious, ambitious show feels like its still a work in progress. 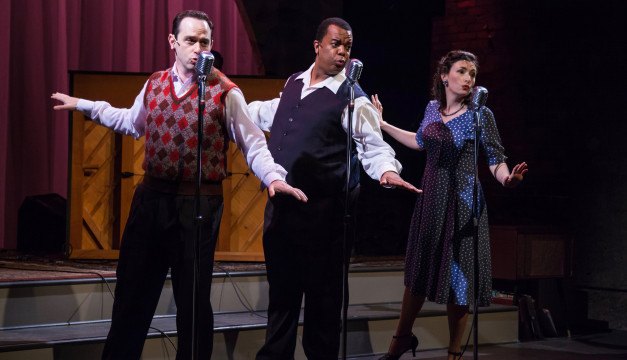 As you are watching Big Red Sun, I recommend you focus on the aspect of it that celebrates American popular music of the 1940s. Georgia Stitt (the composer) and John Jiler (who wrote the book and lyrics) have crafted some catchy pastiche numbers that are well delivered by a fine five-piece orchestra and a likeable acting and singing ensemble (this is often a significant feature of 11thHour shows). Company co-founder Michael Philip O’Brien especially shines in a leading role, his smooth-as-silk tenor with its sexy purr of a vibrato in tip-top shape. Megan Nicole O’Brien’s staging suggests a group of musicians hanging out and improvising, and has a pleasingly relaxed quality.

If only it were that simple.

Big Red Sun is really not meant as a nostalgic romp. Stitt and Jiler’s musical is a serious, ambitious work that covers roughly the 15 years from WWII to 1960. Themes including a teenage boy (the appealing Kyle Segarra) searching for his lost father (O’Brien), who served in WWII; interfaith marriage (Jewish boy, Irish girl a la Abie’s Irish Rose); the horrors of war and the Holocaust; and the need to make music as a vehicle for self-fulfillment.

That’s a lot of territory, and Stitt and Jiler are only intermittently successful. Big Run Sun jumps from topic to topic in short scenes that don’t cohere into a satisfying long arc. Few musical numbers feel fully developed, and some (including a clever, comic Yiddish Bar Mitzvah song) traffic in overfamiliar types.

The more serious narrative songs that are meant to do the heavy lifting – including the show’s apotheosis final number – are Stitt and Jiler’s least persuasive and most generic work. But frankly, even imitating the 1940s, while they can effectively channel the kind of Big Band novelty numbers that were popular at the time, there’s little suggestion of the great music of this period (the era of Rodgers and Hammerstein, Lerner and Loewe, Harold Arlen, and many other giants).

Too bad, because what I take to be the central theme of Big Red Sun is the cathartic, transformative power of music. Both father and son—without ever having known each other—share a gift for rethinking songs and moving them from one cultural tradition to another. That’s a terrific idea of a show, but here the score – serviceable rather than inspired – doesn’t transport us.

The fault is not with the good cast (in addition to Segarra and O’Brien, they include Marybeth Gorman, Hanna Gaffney, Jamison Foreman, and the especially fine Rob Tucker), nor the production, though the jam-session style staging keeps us very consciously watching a performance.

The issue is the Big Red Sun itself. It looks like a work in progress, but although 11thHour’s production is indeed billed as a world premiere, there has been a long gestation period with considerable workshopping.

That doesn’t bode well for a show where even the title metaphor—the big red sun—isn’t clear. Given the WW II setting, I had expected it to have something to do with Japan; it doesn’t, but despite the big final number, I’m not sure what it does mean.

As with so much of Big Run Sun, my immediate reaction was a big red question mark.