REVIEW: In 1812 Productions’ Hope and Gravity, Romance has its Ups and Downs

Michael Hollinger’s funny and clever play could use more gravity. 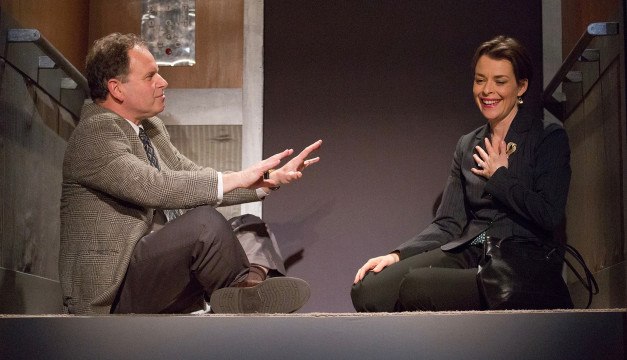 David Ingram and Suli Holum in Hope and Gravity at 1812 Productions. (Photo by Mark Garvin)

‘Tis the season of Michael Hollinger, Philadelphia playwright extraordinaire, and audiences are clearly in a celebratory mood. So am I, though not without reservations. Sing the Body Electricat Theatre Exile gets off to a wonderful start with some real dramatic texture, but it needs a stronger resolution.

Now at 1812 Productions, we have Hope and Gravity, which is funny and highly-polished but doesn’t go deep enough.

In Hollinger’s program note, he explains wanting to explore characters whose paths cross through unexpected circumstances, mentioning examples in recent fiction like Olive Kitteridge andVisit from the Goon Squad. Hollinger also indicates his admiration for the poet W.H. Auden, whose work he also cites in Hope and Gravity. Watching the show, a few more comparisons came to mind.

The first was to Thornton Wilder’s The Bridge of San Luis Rey, where the premise—the collapse of a rope bridge, which brings into focus the individuals who died there—resembles Hollinger’s plot. But that’s about all that’s similar. Wilder’s book (gorgeous, by the way) has some droll touches but is largely a serious philosophical exploration. Although the precipitating catastrophe in Hope and Glory—an elevator crash—causes death to one occupant and significant damage to another, Hollinger’s tone is largely comedic, and his field of vision mostly taken up with romantic entanglements that, through connections to the elevator incident, become even more complicated.

My next point of comparison—to British playwright Alan Ayckbourn, a genius at comic structure—proved more apt. Hollinger also has a masterful sense of using scenes as building blocks, moving back-and-forth in time here, and giving us tantalizing bits of information which may not resolve themselves till late in the play. Hope and Gravityalso surprises and delights us with unforeseen connections between characters.

But the clever, punchy format of Hope and Glory—nine short, out-of-order scenes—plays like sketch comedy, each with a specific funny… well, “gimmick” is too strong, but one feels that emotional issues here are too often subordinated in favor of easy humor. There’s a lovely sequence in which a famous poet is attempting to write his first new work in years, to which actor David Ingram brings some poignancy. I wish there were more of this.

My final comparison was to Neil Simon, long thought to represent the gold standard in American comic playwrighting. Hollinger, too, can produce a 14-carat punchline, and we have more than a handful of good examples here. And, like Simon, Hollinger uses humorous situations to explore universal human problems. If you’re a Simon fan, you’ll find much to like in Hope and Gravity, which receives a lively, loving production at 1812 under director Jennifer Childs, and also offers a sensational, sometimes dizzying design by Jorge Cousineau. The able cast—along with Ingram, they include Gregory Isaac, Suli Holum, Sean Close, and Jessica Johnson—certainly delivers.  But I think Childs and company could afford to let up a little. Michael Hollinger is a very funny writer—the actors needn’t push quite so hard.

Hope and Gravity plays through May 20. For more information, visit the 1812 Productions website.