REVIEW: At Walnut Studio, Andrew Llloyd Webber with Tears but no Chandeliers

A rare opportunity to see Tell Me on a Sunday reveals a good idea, flawed in the execution. 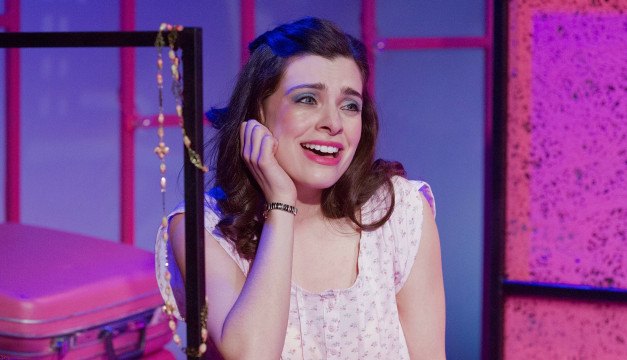 Julia Udine in Tell Me on a Sunday at the Walnut Street Theater Independence Studio. (Photo by Mark Garvin)

In 1979, Andrew Lloyd Webber, King of the Large-Format Musical, went small. The result, in collaboration with lyricist Don Black, is Tell Me on a Sunday, a one-act, one-actress show, which follows a young British woman as she goes from New York to Hollywood and back again, pursuing romantic relationships that often end badly. With virtually no spoken dialogue, Tell Me is almost more a song cycle than a musical. Through those songs—and solely from the perspective of the Girl, as she’s called here—we piece together the hopes and defeats of her life.

Tell Me, which began as a concept album, has been tweaked over the years by Sir Andrew and others. It has achieved a degree of cult status,  but is rarely performed. (If you know it at all, it’s likely the full-length and substantially reworked Broadway version, Song & Dance, for which Bernadette Peters won a Tony Award.)

So, it was good entrepreneurship for the Walnut Street to program Tell Me, using what is largely the original concept album version of the score (though there has been some tweaking here, too), and presenting it in their intimate Studio space. For Sir Andrew’s legion of fans, this show is self-recommending.

For me, it’s a tougher sell. I think Tell Me is a promising idea with an intriguing structure, and I applaud the goal of focusing tightly on a single character’s inner life. But the show fails in the execution. Webber’s sometimes appealingly tuneful music is often undermined by Black’s clumsy, crude lyrics. Tell Me runs not much more than an hour, and the shorthand storytelling makes it difficult to follow the emotional twists and turns. One minute, the Girl seems dewy and sincere; the next, she’s tough and calculating. In this production, a series of distracting on-stage costume changes contribute to the sense of schizophrenia.

Clothing aside, there are some clever and resourceful touches in Debi Marcucci’s staging, and musical director Ryan Touhey supports ably from the keyboard. Julia Udine (the Girl) is exceptionally attractive. Her voice is also lovely, as long as she’s not applying too much pressure, but the Webberian signature climaxes turn harsh. Udine clearly tries hard to mark the character’s stages of development; it isn’t her fault that there simply isn’t enough material to work with.

I’m not generally a believer that bigger is better, but the inevitable conclusion is that—in Sir Andrew, at least—it is. He is the proven master of grand theatrical effects. But in Tell Me on a Sunday, portrait-painting in miniature is elusive.

Tell Me on a Sunday plays through June 10. For more information, visit the Walnut Street Theater website.