The Austin indie mainstays were on point last night. 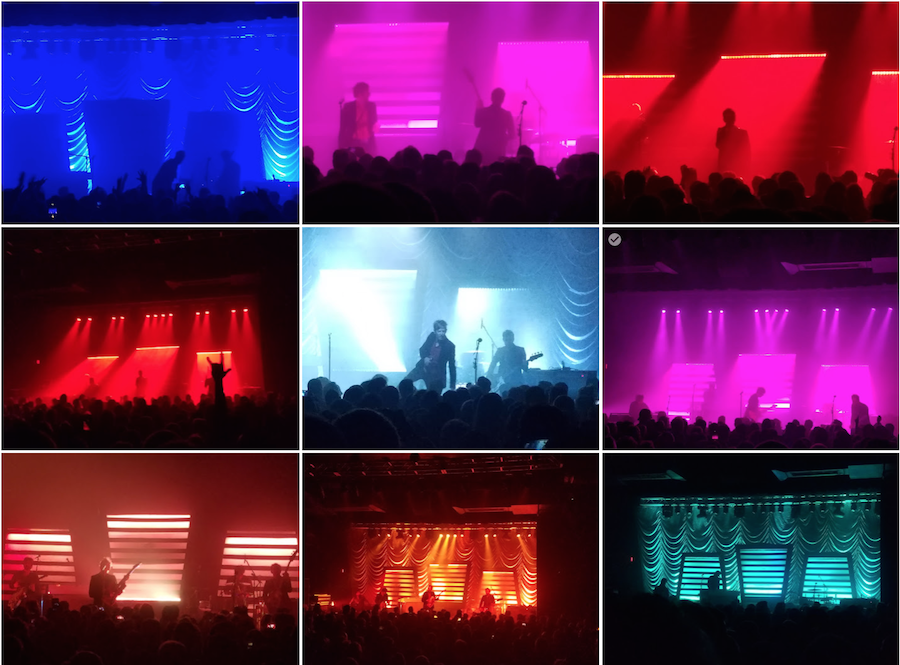 The collage technique hides the poor quality of the photos and the photographer’s inability to get within 500 feet of the stage. (Patrick Rapa)

Sometimes you want a little swagger. Feels like I’ve been to a thousand shows where the bands stand stock still, rocking out but fixed in place like animatronic figures from the Hall of Presidents.

Singer Britt Daniels struts and points and strikes poses, prowling the stage and hitting the high notes like some Motown diva. I helps that he’s tall, thin and limber, creating Jack Skellington silhouettes on a backlit stage.

There’s a distinct Spoon sound, a trick of the trade they do better than anybody, only it’s hard to pin it down. So many songs begin with tight, clean grooves and riffs with built-in breathing room. They do it with ease and grace, be it in the three-guitar setup, the two-organ set up, or some variation therein. Before things really get going, it’s easy to mistake one song for another. Is this “I Turn My Camera On” or “Can I Sit Next To You”? “Don’t You Evah” or “Everything Hits at Once”?

All were crowdpleasers last night, all ended up in different places, and all had us cocking ours necks like pigeons. Straight-up dancing was a tall order, as the sold-out show seemed especially humid and overstuffed. Several times I thought I was hearing the first notes of “The Way We Get By” but it never came.

And it wasn’t missed. Spoon’s batting average is so impressive, and their catalog so large, that every set list can leave off a few favorites and never disappoint. They played the XPoNential Fest over the summer, but this was the band’s first headlining gig in the area for last year’s dynamite Hot Thoughts record.