David Jacobi’s play wants to capture something important. I wish I knew what. 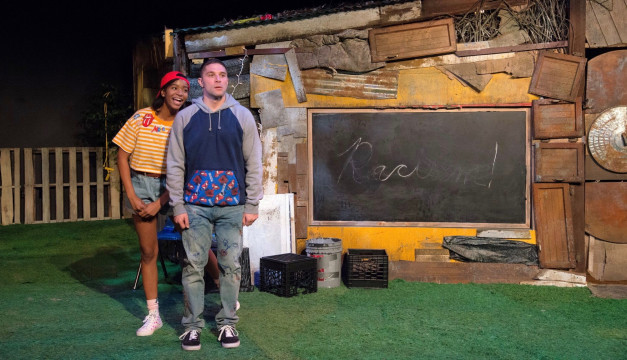 Underneath it all is a harsh, ugly moment and a need for understanding. A racial epithet—yes, the N-word—has been scrawled on the wall of a local family home. Of course, it’s not the first time this happened somewhere in America—nor, sad to say, will it be the last. But it’s awful and unsettling, and five local middle-schoolers make it their business to sleuth out who did it, and why.

From there, David Jacobi’s Ready Steady Yeti Go moves in unexpected directions. Much of it is comedic. The tone suggests a teenage adventure story, with Kevin Meehan’s evocative, dream clubhouse set, and the script’s nostalgic riffs (including one meant to evoke Highlights magazine’s famous Goofus and Gallant feature).

I applaud Jacobi for bravely swimming into shark-infested waters. The current climate makes any discussion of racial politics difficult, much less an attempt to treat it with some levity.  Still, Humor is often the best way to dispel tension and bring people together—heaven knows we could all use a good laugh, and Ready Steady provides a handful.

If only the show hung together.

A central conceit of Ready Steady is a framing device, wherein the story is enacted as a kind of game by the five students (“Ready Steady Yet Go!” is a command phrase in that context), who will by turns play other characters. This lends theatrical coolness to the show, but it’s at least one layer too many. It also raises more questions than it answers, even casting doubt on the precipitating event.

And while it’s well done here under Allison Heishman’s imaginative direction, the feigned improvisational style is arch, and hampers rather than helps Ready Steady – it lacks the shape and momentum of a more forthrightly constructed narrative on the one hand, and the freshness and spontaneity of genuine improvisation on the other. Reducing characters to impersonated cartoons (the well-meaning but gauche teacher; the headgear-wearing nerd)— even when skillfully done—makes it hard for us to take any of this seriously. Isn’t the point here to not reduce people to stereotypes?

The five young actors all do exceptionally fine work, with Kishia Nixon and Adam Howard the most convincing in playing middle-schoolers, Frank Nardi, Jr. the most emotionally compelling, and Alison Ormsby and especially Jensen Titus Lavalee the most virtuosic comedians.

While I found individual moments in Jacobi’s play poignant and even powerful, in the end I was more confounded than enlightened. Ready Steady Yeti Go clearly wants to capture something important. I just wish I knew what.