The first-time director on his love of jargon, his family’s penchant for certain famous board games, and why he likes to write about heroes. 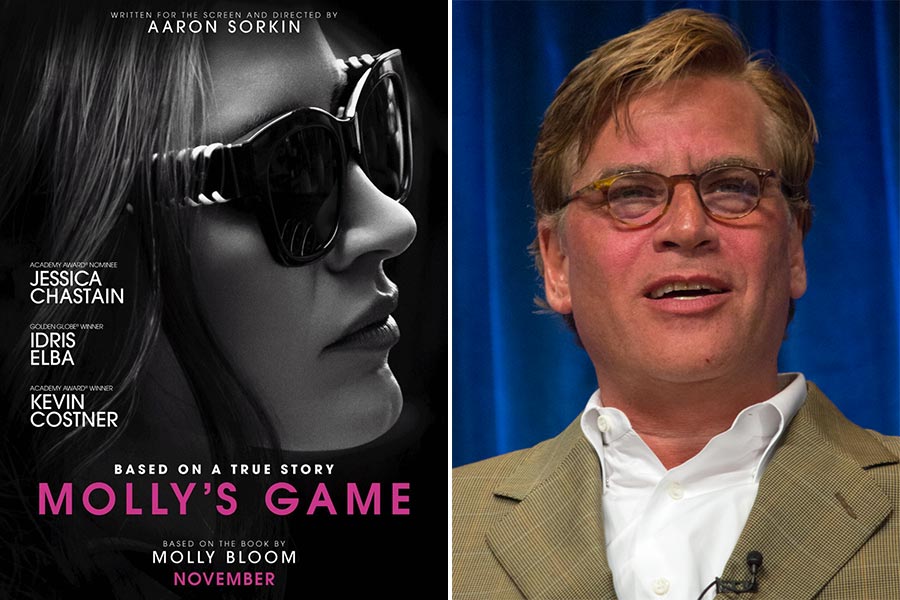 It should come as no surprise to consumers of Aaron Sorkin’s considerable TV and film bibliography that the writer-turned-director fills up interview space with a kind of restless inquisitive energy. Upon my arrival at the hotel conference room set up as a makeshift media center for his directorial debut, Molly’s Game, he is in mid-conversation with his assistant on the potential viability of his becoming an NFL kicker if he trained really hard (his conclusion: “There’s the opportunity for humiliation but not that much physical pain”). There is a tangential athletic connection between this subject and his film, which is about Molly Bloom (ably portrayed by Jessica Chastain), the real-life former Olympic-class skier who jumped from competitive athletics to running an illegal, high-rolling poker game for the rich and famous first in L.A. and then in New York for several years before running afoul of the FBI, and eventually writing a tell-most book about the experience. Early reviews have been positive, and it would seem as if Sorkin’s big bet on himself is paying off handsomely. He spoke with us about his love of jargon, his family’s penchant for certain famous board games, and why he likes to write about heroes.

Is it fair to say you have a deep appreciation of jargon in your writing?
Absolutely. I’m crazy about it, ’cause I like language. What we’re talking about is language that most people are unfamiliar with, but it’s also the easiest way to indicate that somebody is an expert at something. Often times, it’s not important to me that an audience is understanding what a character is saying, just that the character understands what they’re saying. Every once in a while, Molly would be talking to me about something, about a particular game, and she would effortlessly slip into a kind of Damon Runyon thing without even knowing that she was doing it. She’s never played a hand of poker in her life but she is an expert.

It’s funny that so many popular games involve doing things that cut against ethical, social restraint: lying, cheating, bankrupting. What games do you like to play?
We are a Monopoly-playing family. It’s a summer game and we play full out, which means you can make deals with other people. If I’ve got Park Place and you’ve got Boardwalk but you’ve got no money at all and I’ve got a lot of money, I’ll make you a deal where I’ll buy Boardwalk from you and give you three free laps around the table.

Whenever my daughter tries to get me to play Monopoly, I tell her “Look, in any given room of people, the winner of Monopoly is the worst person in that room.”

[laughs] Once you start making those deals you really are like going after another player at the game. So you’re right, but I make a joke about it. I say here’s our outlet for being jerks. We can all be jerks at this game, but as soon as we get up from the table, we’re nice people again.

It seems as if another recurring idea in a lot of your work is an abiding admiration for your protagonist. Is that something you are directly conscious of when you write?
This whole thing started when I was six years old and my parents took me to my first Broadway show, which was the original production of Man of La Mancha. It had a profound effect on me plainly. I’m sure it compounded things that I always saw my father as Don Quixote. A guy, one foot firmly planted in a different century perhaps, that never existed, but with a deep abiding sense of right and wrong.

Since the book identifies a few of the high-rolling movie stars who played in her game in L.A., was it a challenge to reference them without portraying them on screen?
Something I really had to wrestle with: Do I pixelate their faces? Do I shoot them from the back? Do we just see hands? Do I blur them and alter their voices as if they didn’t sign a release to be in the movie? So I came up with the idea of Player X [played by Michael Cera], an amalgam of the four movie stars who played in the [real] game. Molly makes it very clear in voiceover there were movie stars in the game, and this person is just standing in for all of them. Might as well have a baseball cap that says “movie star.”

Was there any trepidation to try directing for the first time?
God knows I was scared to death, but the reason I said yes was I knew that with the script I wrote, there was going to be a gravitational pull toward the shiny objects: the decadence and the glamour, the sex, the money, the poker, the movie stars. But I didn’t want to lose that heroic, emotional element of Molly that had so lit me up in the first place. I just didn’t want to litigate my choices.