Sinbad Loves Philly, Isn’t So Sure About Louis C.K.

The comedy legend talks Sixers, Italian tracksuits, and an abandoned project from the ’90s with a lesson for men today. 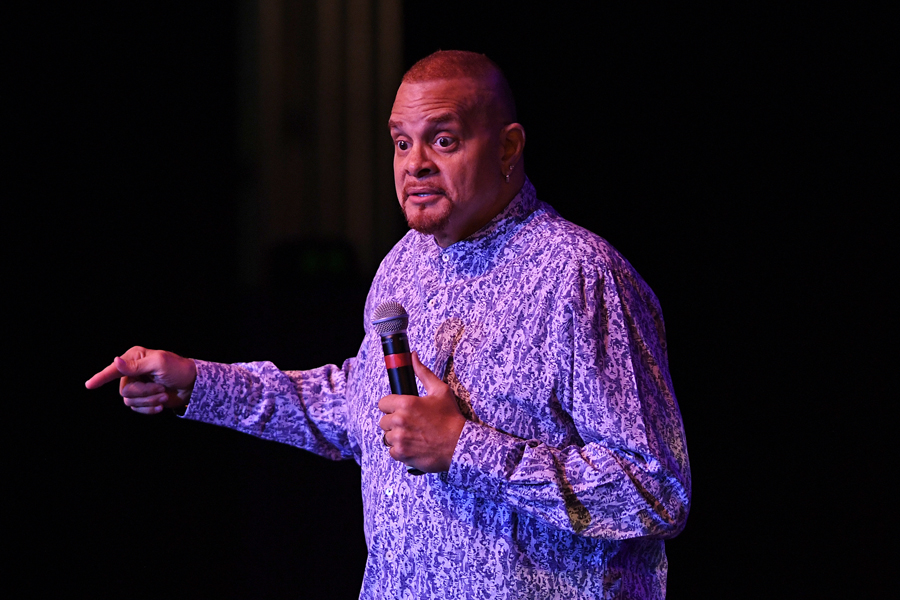 Now approaching his fourth decade in comedy, Sinbad feels as sharp on stage as ever. It’s hard to believe that the star of such ’90s childhood classics as Houseguest and First Kid is 61 years old. Brutally honest and as genuine as he appears on screen, Sinbad sat down with Philly Mag after a two-hour marathon set at Glenside’s Keswick Theater last week to discuss his career, the downfall of standup peer Louis C.K., and a movie idea from back in the day that would totally kill in 2017.

Can you give us a quick refresher on your history with Philly?
I’ve been coming to Philly since ’83. The first time I was here I fell in love with Philly, man. I’ll always remember my first shows at the old Shubert Theatre (now the Merriam). I love the food, the music – I just found out that Pink came outta here. I heard she used to jump on stage at the black nightclubs! That explains it now, why I like Pink … In Philly I get a lot of love. L.A. was never really my city, never been my city, and they never really had any love for me. But the East Coast, man, is my spot. You can’t do anything to get in with the Philly crowd. Philly cats are funny, man. When the Sixers played the Lakers in the [2001 NBA] finals back when Iverson was playing, we went to a game and my son and daughter were all in Philly gear. I remember one guy saying, ‘Man, he’s got them wearing all that just so nobody messes with him.’ Then I started rattling off statistics about Allen and all their guys and the fans were like, ‘Wait a minute, he’s a Philly fan, too!’ Ya’ll intense, man.

Are you seeing a resurgence in your career now with people my age who were fans as kids coming out to see you perform?
It’s funny, I’m seeing a ton of younger people come out, and I don’t really know what caused it. I know the key is sometimes doing more TV stuff. I’ve been talking about doing a college tour or even a couple of shows geared toward the young crowd. I’m not this old comic who doesn’t get young people. I’m a tech freak, into computers – I even out-tech my own kids. See, I like what Prince did. He kept young bands around him because he said it kept him alive. I tell people all the time that if you want to feel young again, go walk around on a college campus. You’ll find yourself back in the library trying to go for another degree.

At 61 years old, do you think you’re a more focused and insightful comedian now as opposed to back in the ’90s?
I would hope so. What was it that Chuck D from Public Enemy said? “At this age, if you ain’t smart enough to teach – there ain’t no reason to be walking around.” At this point where I’m at, you become more insightful because you’re not so caught up with becoming a star. Plus, if you don’t get my set and don’t think I’m funny, I really just don’t care anymore.

In your set, you commented a bit on how politically correct society has become in 2017. With that idea in mind, is it harder to be a comedian these days? Does your reputation as a “clean comic” help you here?
See, I don’t look at it in terms of dirty or clean because I could work that same material either way. My conscience is clear. And when your conscience is clear, you can say anything. It’s funny, man … When you look at Louis C.K. – some of that stuff he was saying makes you go ‘Oh Jesus, dude!’ He was really going through it, man. But for me, I can be honest and say I’m glad that those guys are dealing with it. Men didn’t create women trying to be sexy, but at the same time you can’t harass, abuse, or rape. It’s pretty simple. But men get gamed because we’re stupid. It’s the hope of sex that gives women power. I was celibate for close to two years. It was the most powerful I’ve ever been in my life.

Was celibacy particularly torturous for you?
For me it was a choice, like cutting out bacon. It’s funny how when you say you’re going to cut something out you immediately want it, even if you don’t want it in your life. But it was surprising how easy it was. Even when you’re up in that rare air as a superstar, you still can have that come to Jesus moment we call getting BBD’d – being passed over by women for some bigger and better deal. I wrote this movie in the ’90s called Just Say No. Me and my son are going to direct it together. I was a young guy in the movies back then, but now I’m an old guy trying to start a movement with all of this sexual assault stuff. In the movie I play a guy who tells this group of guys going through things in life to try celibacy. It’s all about getting men to stop being such creeps. Back then, Hollywood said this is bad for business.

Now that we’re officially in the holiday season, I have to ask – do you still watch Jingle All the Way?
I catch bits and pieces of it every year, but I haven’t watched it from beginning to end for about six, seven years.

I gotta say, Sinbad, I have some tracksuits that rival yours from way back when.
Are they Sergio Tacchini? It was all Italian for me. First I had to go to Atlantic City to get them, and then I found this place in downtown L.A. before they started sending them to me. Man, I had every color and I wore them everywhere – shows, out on the street. I don’t even know what happened to that company!

Finally, do you Trust the Process?
Man, this team is so exciting. It’s good for Philly. Not since the days of Iverson has there been a Sixers team like this. When I was in college, Dr. J used to give me his shoes when he was playing for the Nets – size 15. Still got ‘em.