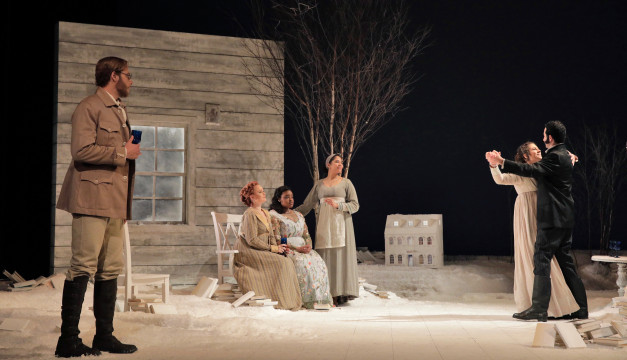 Eugene Onegin by Curtis Opera Theatre at the Prince. (Photo by Cory Weaver)

It’s always a treat to see Tchaikovsky’s magnificent opera setting of Pushkin’s Eugene Onegin, and here we have the additional plus of an intimate venue. The Prince Music Theater has fewer than 500 seats—smaller even than the Kimmel Center’s Perelman, where Curtis has done some magical work in recent years. It puts the audience up-close-and-personal with the performers. Since they’re the driving factor in a production from one of the world’s great music conservatories, let’s start there.

All of the group at opening (individual singers change during the four-performance run) showed promise. Pride of place goes to the secondary couple, Lensky (Evan LeRoy Johnson) and Olga (Anastasiia Sidorova). Johnson especially was notable, his honeyed tenor caressing the long lines of Lensky’s gorgeous, celebrated aria. Sidorova has a wonderfully plangent, deep mezzo and very clear diction. Among the supporting cast, I particularly enjoyed baritone Patrick Wilhelm (as Zartesky)—his distinctive timbre would be a good fit for the title role at some point. Conductor Joseph Mechavich and the orchestra did well in revealing the glorious colors of Tchaikovsky’s orchestration, though the reading needed more urgency and momentum.

There is fine work, too, from the principals—Onegin (Doğukan Kuran) and Tatiana (Tiffany Townsend). Kuran’s singing showed considerable polish, though his voice and personality are size too small for this grandly romantic role. It took some time for Townsend’s fresh lyric soprano to find full resonance and freedom, but she was lovely in the final scene. She was less effective dramatically… which leads to the production.

Even performed in a small space, this is no chamber opera, yet that seemed to be the goal here. Directed by Curtis stalwart Chas Rader-Shieber, this Eugene Onegin is heavily cut, played without an intermission, shorn of a number of supporting characters, and staged on a single unit set—an exquisite, fragmented country house in winter. It’s all very pretty, a world that suggests life in a snowglobe, and there are some spectacular images (kudos to lighting designer Mike Inwood).

But Rader-Shieber’s staging lacks variety and specifics, and is further limited when moments meant to take place in large public spaces are pared down to a few principals. The sense of stasis is a particular disadvantage for Tatiana, who has almost no physical business, and instead seems often placed far away, staring ahead wistfully as if observing her own life at a distance. It’s a not-inappropriate metaphor—but overused, it and the general flatness of the staging neutralizes the power of this work.

Tchaikovsky’s Eugene Onegin is steeped in melancholy, but paradoxically also throbs with emotional energy. Seen here, it is a world in miniature—as much a simulacrum of larger life as the omnipresent dollhouse on the stage.