In Carousel at Media, Life Lived Fully in a One-Horse Town

This production is small-scale but often imaginative and satisfying. 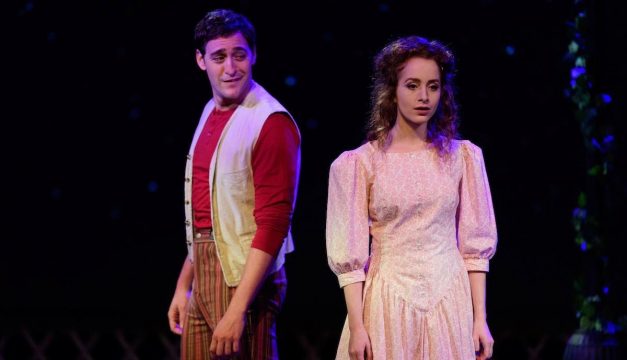 Joseph Spieldenner and Maxwell Porterfield in Carousel at the Media Theatre.

As you enter the theatre and hear the distant strains of a calliope, take a look at the stage. What you’ll see there, in Matthew Miller’s set design for Media’s Carousel, is a distillation of this small-scale but often imaginative and satisfying production, directed by Jesse Cline.

The visual world is fragmentary, even impressionistic. A lone carousel horse stands in for the thing itself, amplified through projected images. On either side of a metal arch are sepia photographs, evoking a 19th Century New England coastal town—in particular, its factory. There’s a sense of nostalgia, but not the picture-postcard kind—we perceive instantly that life here is hard-scrabble. The joys need to be celebrated when and where they can. When they can’t find joy, something else must keep them going.

That is indeed the essence of Rodgers and Hammerstein’s Carousel, and there are joys here for the audience, too. The first few scenes reveal many of them—that the dialogue here will be important, as well as the songs; even more, that there will be a seamlessness as one moves into the other. We find it in the conversational “You’re a Queer One, Julie Jordan,” where Madalyn St. John (playing Carrie) is a lively, delightful complement to the more serious Julie of willowy, elegant Maxwell Porterfield. (Both have fine voices—Porterfield’s soft-grained soprano is a particular pleasure.)

This natural balance of song-and-speech is even more striking in the famous bench scene (“If I Loved You”), where Porterfield is well-paired with Joseph Spieldenner’s Billy. Spieldenner is strongest here in the romantic and charming aspects of the character; the brutishness doesn’t come quite so easily. Effective as the secene is, I did, however, wish for a slower tempo—what’s missing is the sense of suspended time. Later, the group will be joined by George Slotin as Enoch—Slotin is a likeable but limited actor, but his sweet and true tenor makes terrific points in the songs.

These intimate moments are especially strong in Media’s Carousel, which also uses a smallish orchestra, reinforcing the chamber quality. But the energetic young ensemble, who do much of the show’s heavy lifting (singing and dancing) is very strong.

As Carousel turns more tragic, with an almost operatic sense of grandeur, Media’s forces are more taxed. Still, there are good things also in Act II, including a touching and vocally lovely Nettie Fowler (played by Media favorite Elisa Matthews), a fine Louise (actress/dancer Beada Briglia, and an honorable version of the difficult ballet.

Carousel stretches the resources of even the largest companies. Fair to say also that the politics of the piece, including a subplot about spousal abuse, aren’t easy for a contemporary audience. (To Media’s credit, they don’t shy away from exploring it.) The work is problematic for sure—but also undoubtedly an American masterpiece, with an unforgettable score.  This earnest, thoughtful company is to be congratulated for getting so much of it right—proof that in theater, it’s imagination rather that makes the magic.