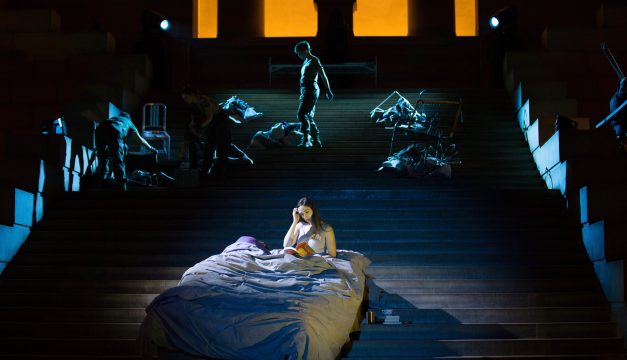 At the core of War Stories, a provocative pairing of two works (one Baroque, one contemporary), is a haunting new opera by Lembit Beecher, which receives its world premiere here in O17.  The title is ironic—I Have No More Stories to Tell You is, in fact, full of disquieting story fragments, drawn from lived experience as well as terrified reliving. Set in the present, war dominates the lives of three character, most of all Sorrell, a female soldier now back at home and suffering from PTSD. At night, she lies in bed—though her husband tries to help her, she is largely beyond comfort.

So why is the umbrella evening not completely satisfying?

Some of the problem lies with No More Stories, which despite its short length takes a while to get going. But the bigger issues are related to the pairing (with Monteverdi’s Il combattimento di Tancredi e Clorinda) and the venue (the Philadelphia Museum of Art).

Both are good ideas—it’s wonderful to see Opera Philadelphia use O17 to connect with other Philadelphia cultural institutions. And the musical/theatrical mix with Monteverdi is fascinating (Beecher sharpens the connection by using a Baroque instrumental ensemble, and both works feature the same singers). It’s also terrific to see and hear the Tancredi e Clorinda in PMA’s fantastic recreated Medieval cloister.

But in the end, though there are smart thematic links between the two works, they don’t really connect, especially as seen here, in a visually arresting but abstract production that despite some trappings of war, put me more in mind of Romeo and Juliet. Beautiful though the cloister is, sight lines are a problem for the audience.

As great as it is for Opera Philadelphia to use the Museum, the latter really isn’t a performance venue. The logistics here mean a less-than-ideal playing area (No More Stories uses the Great Stair Hall, which initially looks marvelous, but proves more awkward when the action begins), and tedious, mood-killing delays between works.

Next time I see War Stories—and I hope there is a next time, especially for Beecher’s piece—I hope it’s in an equally atmospheric, but more flexible space. What about the Philadelphia Armory?