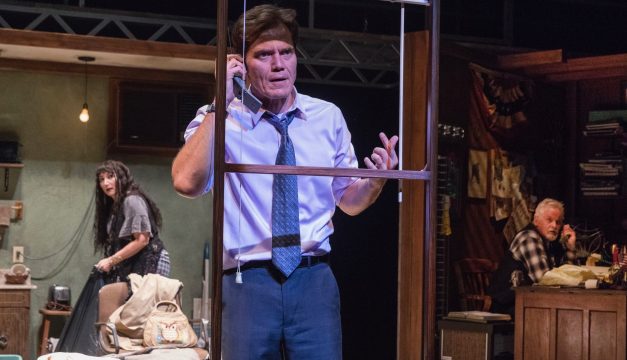 Two things you’ll know from the first minutes of Simpatico—you are very much in a land that can only belong to Sam Shepard; and the McCarter/Red Orchid production’s director, Dado, knows how to put this darkly funny, tonally complex world on the stage.

All of this is great news for me, since Sam’s my jam. I’ve loved his work since I discovered it as a student living in suburban Southern California, a vast wasteland he understands as no one else does. Most of Simpatico is set there—and to a native, at least, the litany of place names (Glendora, San Dimas, Azusa, Cucamonga) toll like a mournful bell. Here is where America has gone to die.

That’s certainly a familiar Shepard theme, and much of Simpatico, written in 1994, recalls some of his earlier, better-known plays.  Two longtime friends, Carter (Michael Shannon) and Vinnie (Guy Van Swearingen), share a murky past veiled in mystery, but it includes cons, seductions, and reversals of fortune. Right now, Carter seems to be on the winning side—turned out in a natty gray suit, his affluence and sobriety are emblems of success, while Vinnie lives in near-squalor and can’t hold a job or a woman.

But where will Vinnie and Carter be next week, or month, or year? No writer understands better than Shepard that the American Dream is fickle. We’re all of us barely straddling the divide.

Shades here of the rival brothers in True West especially, and Shannon and Van Swearingen dish up the banter with the requisite bite and dry humor. Initially, I thought there was too little sense of underlying danger.

But Simpatico turns out be a bit of a detour for Shepard—in some ways, it’s almost a caper comedy, at least for the first two acts (played together here). Or maybe a Hitchcock/film noir homage, complete with oddball female second banana, Cecilia (Mierka Girten), whose big dream is attend the Kentucky Derby. By Act II, a series of punchy, “follow-the-money” encounters drive the action—which changes again in Act III, with a creepy, almost Southern Gothic encounter that introduces one of Shepard’s great female characters, Rosie (Jennifer Engstrom, in a breakout performance). 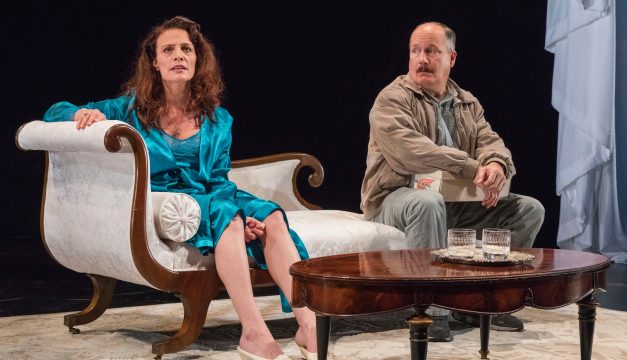 So… it’s complicated, as you can see—and as Shepard always is, really—and tonally, all over the map. I’d probably characterize the play as mostly dark comedy (like a lot of Shepard, the structure suggests a farce), but it’s a long and winding road.

Ultimately, Dado’s production—less naturalistic than we often see in Shepard, with real visual flare—captures the oddness of Simpatico as well as I can imagine. Michael Shannon is clearly the drawing card here (and he’s terrific—the stranger Carter gets, the better he is), but in fact it’s a very strong ensemble across the board, with Engstrom really delivering the knockout punch. No lover of Shepard should miss it.

I realize I’ve been writing about him in the present tense. Shepard died a couple of months ago, but I can’t bring myself to accept it. Sam, we will miss you dearly. But with plays and productions like this, you will always be with us.