O Festival Diary—Day II: In O17’s Die Zauberflöte, the Magic is in the Technology

This imaginative, animated staging dazzles in some ways and comes up short in others. 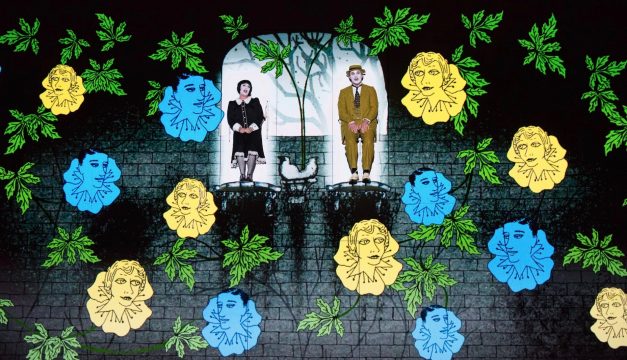 Rachel Sterrenberg and Jarrett Ott in Die Zauberflote at the O Festival. (Photo by Steven Pisano)

Between September 14th and 25th, Opera Philadelphia will boldly go where few, if any, companies have gone before, with O17—a festival that brings seven events covering the broad spectrum of opera, and in some cases pushing it into the future. There are traditional works (Mozart’s Die Zauberflöte at the Academy), new voices (We Shall Not Be Moved, which adds hip hop and spoken-word to the mix), big stars (reigning Met diva Sondra Radvanovsky in concert), and unusual venues (including the Philadelphia Museum of Art and the Barnes). I’ll do my best to cover as many of these events as I can. You can also find more information about the O Festival on their website.

Another day, another challenge. Last night, I gave a quick and enthusiastic response to Elizabeth Cree, a world premiere work I’d never heard before. Tonight brought the comfort of familiarity, with Mozart’s Die Zauberflöte in Opera Philadelphia’s home theater, the Academy of Music. This time, at least I’m on terra cognita—in fact, I taught the opera last week as part of a musical theater course.

Still, there’s nothing simple about Zauberflöte, which despite its fairy-tale tone dwells in ambiguities and big, dark questions. The musical demands are formidable. But it’s a great choice for O17, as the mythical setting (usually a fantastic take on ancient Egypt) lends itself to imaginative rethinking. 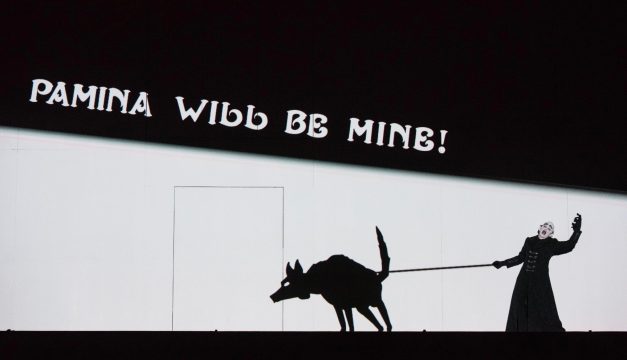 Brenton Ryan in Die Zauberflote at the O Festival. (Photo by Steven Pisano)

As for the production here, by co-directors Suzanne Andrade and Barrie Kosky, with animation by Paul Barritt and costumes by Esther Bialas… well, I’m still sorting it out. In the plus column, it’s a feat of technical wizardry, boundlessly imaginative, and sometimes genuinely brilliant in allegorical terms. As advertised, the idea is based on silent film, and indeed some of it has a Chaplinesque or even Expressionist look. To me, though, more often the soft colors and focus suggest early Disney.

And that’s also the problem—the action, too, feels Disneyfied, with the visual world overshadowing the characters. Shorn of their spoken dialogue, with the animation doing most of the acting, far too much of Zauberflöte’s deep humanity disappears.

Musically, the evening is a similarly mixed bag. David Charles Abell conducts a pleasingly brisk but rather under-characterized reading of the score. Top vocal honors go to tenor Ben Bliss, an ardent, elegant Tamino; the refulgent three ladies of Ashley Milanese, Siena Miller, and Anastasiia Sidorova; and Peixin Cheng’s eloquent Sarastro. The best acting is by Jarrett Ott, a loose-limbed Papageno who could (ahem) charm the birds out of the trees.

Ultimately, I think the presence of this Zauberflöte—as a centerpiece to O17—is exactly the right place.  My reservations aside, it’s a visual and technological marvel, and I can imagine it winning over a whole new world of opera lovers. It’s not “my” Zauberflöte—but it certainly will be somebody’s.