The writers and star talk rom-com etiquette and writing about your own life. 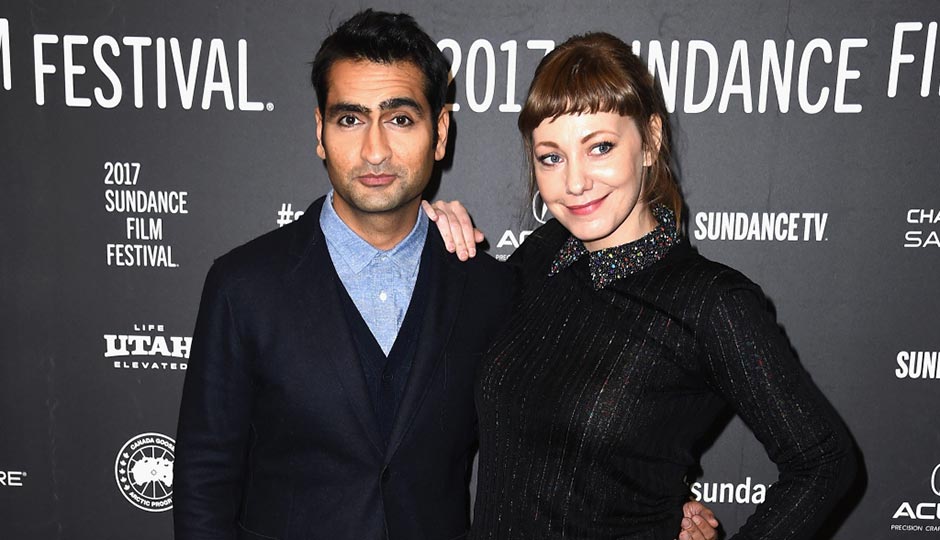 Right from the start, Kumail Nanjiani and Emily V. Gordon, the married couple who wrote The Big Sick — loosely based on their own courtship experience — feel the need to explain a few things. While some of it is from their actual lives – Emily really did get very sick and go into a coma for a while, and Kumail’s traditional Pakistani parents did very much want him to have a traditional arranged wedding – most of the film’s biggest moments were dramatic license.

The comedy, which earned big buzz coming out of Sundance, stars Kumail as, mostly, himself, a young Pakistani American not wanting to follow his parents’ strict doctrine but afraid to step out and risk losing his family in the process. When he meets Emily (in the film played by Zoe Kazan), they initially fall hard for one another, before he finally admits he is expected to marry a fellow Pakistani. They break up, but when Emily suddenly falls into a coma, Kumail is the one to stick by her in the hospital, meeting Emily’s furious mother (Holly Hunter) and morose father (Ray Ramano) in the process. The couple, now married a decade, met with us in a swank hotel suite and talked about the trickiness of writing about your own life, rom-com etiquette, and the one thing Emily’s parents want to make clear.

So your private courtship has gotten a lot of attention already, and it’s only going to get more intense when the film is released wide. At any point do you guys look at each other and say “What did we do?”
Emily V. Gordon: It is adjustment. I remember we were at an event at Sundance, and Kumail just kissed my cheek, and I heard people behind us go, “Aw.” I try to be on their side as much as I can: what a lovely thing that they kind of feel a connection to us. And so I try not to feel weird about it. But I am, I think, maybe even a little more private than [Kumail], so I try to take any time I feel like things are invasive and just be like, “What an amazing thing that people are interested enough in general to kind of want to connect to you on any level.” I don’t ever want to feel like our relationship is just like this weird commodity.

EVG: It’s all bright side.

Do you feel any pressure to act differently now in public, since people are maybe watching you more intensely?
EVG: We definitely can’t argue in public anymore. We were just kind of having a disagreement at the movie theater, and then as we were talking, a guy was like, “I just saw your trailer.” And we were like, “Fuck. Okay. Everything’s fine.”

KN: Perform your love for the people.

EVG: We’re very happy together, but also we argue just like any other couple, so it’s definitely been an adjustment — suddenly we’ve become slightly more public than we were before.

How much did you have to adjust for dramatic styling?
KN: We wrote it, initially, exactly as it happened, with everything real. And then the process from then on was excavating and trying to find the movie from our story, and in the process —

EVG: We dramatized it more.

KN: — we turned it from our story into a story. So you find out, actually, this character doesn’t belong, or these two characters should be one character, or it’s actually more dramatic if this doesn’t happen, or it happens later, or if we make up that this thing happened. We rewrote a bunch to get more at the emotional truth of it, right? I think you have to dramatize the actual events a little bit. This is my theory — I just came up with it. Honestly, we wanted people to feel like they really went through the wringer by the end, not in a bad way, but that they’ve kind of gone through everything. They’ve laughed, they’ve cried; they’ve been excited, sad. Everything.

EVG: And I will say, very specifically, my father never cheated on my mother, and they’re very adamant that I mention that.

In many ways, the film follows the rules of the standard rom-com, but then it switches them around like crazy. Fair to say it’s a genre ripe for reinvention?

KN: I love romantic comedies, but I find so many of them are about one character fucking up and then learning to apologize. In real life, relationships are much more interesting. It’s not like anybody’s the bad guy or the good guy. Everybody’s fucking up, and everybody’s being the good guy, and there’s a lot of negotiation going on. I think in most rom-coms, the entire point is, are they gonna get together or not? We wanted to do a movie where even if they don’t get together, it’s not really essential. Because by the end, there’s her sickness, my relationship with my parents, her parents’ relationship with each other — there’s a lot of other stuff. Most rom-coms are about these two people getting together or not, and we wanted to make a movie where that was just one of the 10 things.

Was it difficult to create doubt into a situation where a lot of the people in the audience already know the outcome?
KN: That’s the trick. Everyone’s gonna know we get together and then you still have to make them feel the suspense or something.

EVG: Yeah. Spoiler alert: I lived, and we’re together.

The Big Sick opens at the Ritz East Friday.