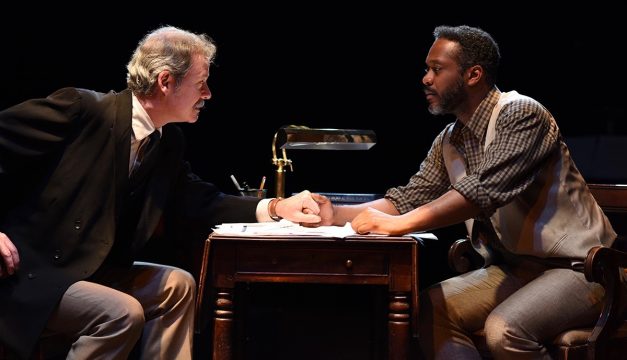 Kevin Bergen and Steven Wright in Uncle Vanya at Quintessence. (Photo by Shawn May)

We theater critics can be insufferable, especially when it comes to Chekhov. We’re forever pontificating about particular productions, usually pointing out flaws. They get the tone wrong; they’re too comic (nor not comic enough); and, of course, this perennial favorite—they’re not idiomatic. As if we actually know, since few of us speak Russian, and none of us has seen one of the original productions by the Moscow Art Theater (the last premiere was in 1904).

Hey, I’m guilty of it, too. But this time, I pledged, it would be different. Rather than comparing productions—or relying on some conceptual idea about how Chekhov ought to look—I’d consider Quintessence’s Uncle Vanya strictly on its own terms. Alas, that’s easier said than done. Minutes into this sometimes powerful, but often meandering Uncle Vanya, inevitably I was trying to understand my sense of disconnection.

You see, director Alexander Burns is using Annie Baker’s adaptation of Uncle Vanya—so there’s already some layering. Baker, one of my favorite playwrights, has an acute sense of the tiniest quirks of human behavior, which should be ideal for Chekhov. She also has a nonpareil ability to capture contemporary speech. That’s not so good here—because the world she’s working in is still clearly Russia at the end of the 19th Century. The names, places, social and cultural references all belong to that world.  So, to hear, for example, Dr. Astrov describing his friends and acquaintances as “creeps”… well, it rankles.

Burns and company compound Bakers’ layering with a production that straddles two worlds. You’ll see it right away in the costumes, a mélange of periods and styles. More important, it’s present in the deliberately low-key interactions and slow pace.

Sometimes, it’s effective—it’s a luxury to hear Chekhovian conversation actually have a feeling of intimacy. Burns has also staged Uncle Vanya imaginatively, and the theater-in-the-round configuration works well. Shifts between stage conversation and direct address to the audience are handled masterfully. Partly due to Baker’s language—but also to our own strange moment in history—the theme of protecting the environment and collective responsibility has never seemed more on point. As for the rest Uncle Vanya—family squabbles, the impossibility of love, living with disappointment—well, these are timeless.

But while Chekhov deals with profound spiritual ennui, too often what we see here looks merely enervated. The acting is a mixed bag, though a few performances shine. Jessica M. Johnson is a touching Sonya—even saddled with a weird costume (overalls—really??), she communicates luminousness. Julia Frey, a languidly glamorous Yelena who might be straight out of a film noir, most successfully infuses her character with a contemporary twist. Best of all are Dan Kern (Serebryakov) and Steven Wright (Vanya), two actors who generate internal energy and a sense of life force even in their most quiet or downbeat moments. To me, that’s a key quality to performing Chekhov.

Put it another way—the great irony of this production is that it is at its best when it’s closest to a traditional Uncle Vanya.