I would gladly have stayed on to see this gorgeous show a second time. 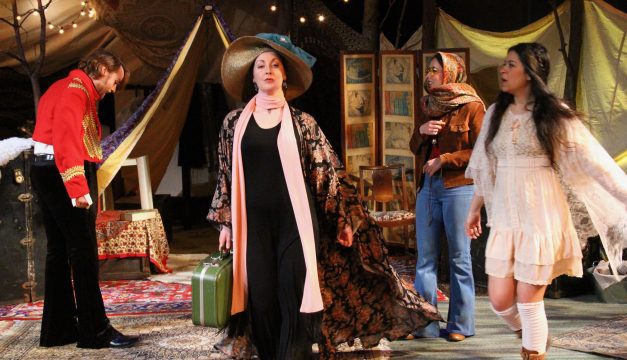 Trees, lights, tents, rugs, screens—who could resist the gorgeous decorative excess of EgoPo’s Anna (scenery designed by the multi-talented Aaron Cromie)? Over the next two hours, this marvelous adaptation of Anna Karenina, devised by director Brenna Geffers and the ensemble, will build on that magic.

I was hooked pretty much instantly, despite some initial wariness about the central construct. Geffers and company give Anna a meta-theatrical frame, wherein a company of actors in the 1970s are presenting their take on Tolstoy’s novel. Would it all seem too twee?, I wondered. What value could there be in adding an additional layer to this already complex story?

Happily, I was wrong on both counts. The layering proves inspired. Anna is both an honorable, nuanced, surprisingly easy-to-follow distillation of Tolstoy—and, perhaps more important, a stunningly theatrical original work. Geffers is especially good at translating scenes into stylized visuals. Image after image lives on in memory—a sequence late in Act II, when Anna attends the theater, is a one-minute lesson in picturesque storytelling. (Given how terrific virtually all of it is, I’m inclined to forget about one final, unwelcome invention.) 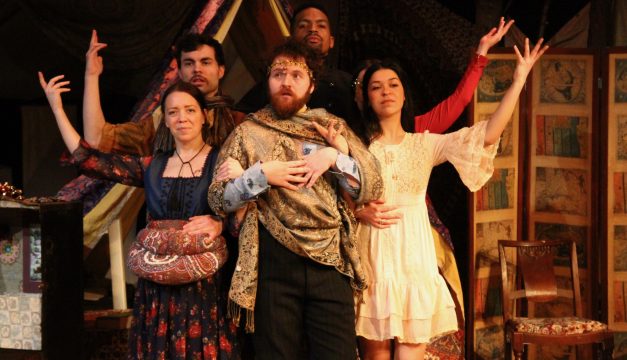 As you might imagine, this retelling puts strong emphasis on cultural politics (aristocratic privilege slowly but surely giving way to new economic clout), and especially on the evolving rules of marriage, dalliances, and consequences. Of course, there’s a bit of contemporary spin here—but Tolstoy’s original vision in many ways is bracingly modern.

All of this is captured with brio by a fine ensemble cast of eight—four women and four men, some of whom play multiple parts.  Everybody is good, but a few deserve special mention. Colleen Corcoran’s marvelously husky, refined voice and speech ideally suit Anna’s world-weariness. Andrew Carroll is an elegant, charismatic rock star of a Count Vronsky (think David Bowie with a beard). Amanda Schoonover makes a heartbreakingly likeable Dolly. (Just looking at Schoonover’s wonderfully expressive face is an acting class in itself). Shamus Hunter McCarty is a born entertainer, especially good playing the cross-dressed role of Princess Betsy. 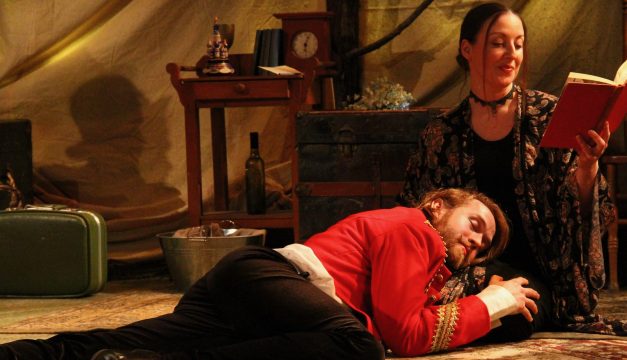 Andrew Carroll and Colleen Corcoran in Anna at EgoPo. (Photo by Dave Sarrafian)

What struck me especially about Anna goes beyond this particular story; it’s how well the production captures our iconic sense of 19th Century Russia—exotic, glamorous, mournful, simultaneously alluring and forbidding. It makes a perfect finale to EgoPo’s “Russian Masters” season.

Early on, I was hit by a memory from childhood—seeing the film version of Dr. Zhivago for the first time, which (though it’s set some 30-plus years later) provided my first glimpse into that doomed world of pre-revolutionary grandeur. I was so dazzled that when the nearly three-hour movie ended, I watched it again.

If I could have stayed to see Anna a second time, I gladly would have.