THEATER REVIEW: In The Enchanted, Life and Death in Wonderland

Idiopathic Ridiculopathy’s little gem of a show has something profound to offer. 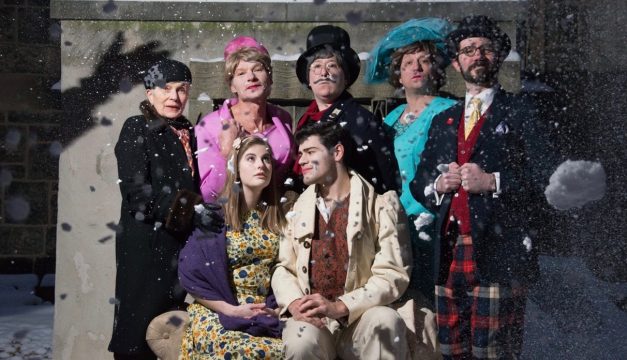 The Cast of The Enchanted at Idiopathic Ridiculopathy Consortium. (Photo by Johanna Austin @ AustinArt.org)

What is it about the French? I think of myself as a reasonably educated, intelligent person—in most rooms, I can hold my own. But put me next to a Parisian raconteur, and I’m a country bumpkin. The French are so sophisticated, nuanced, ironic—nowhere more so than in their intellectual writing, where I often wonder if I’m misreading all the clues.

Theatrically speaking, this applies especially to Jean Giraudoux, whose elegant, elliptical plays are (to me, at least) tonally and thematically ambiguous. Luckily for Philadelphia, we have the perfect tour guide in director Tina Brock—she and her company, the Idiopathic Ridiculopathy Consortium, have made something of a specialty of his work.  Her delightful realization of The Enchanted—a tricky play even by Giraudoux standards—may be the surprise hit of the Philly theater season.

What’s it about, you ask? Well, fasten your seatbelts. The Enchanted is a comedy/drama/satire; it’s a ghost story-love story-crime story-fable-moral parable. It takes place someplace, sometime—maybe now, maybe in the 19th Century, but it also feels sort of medieval. There’s a lovely young woman who is torn in two directions—literally, between life and death.  And in this production, also puppets—mostly as the village children, and very cute! 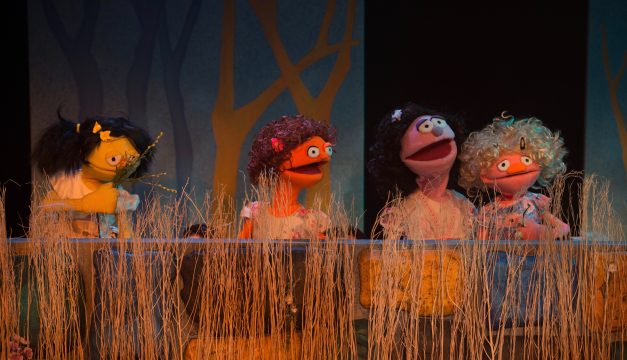 The Village Children of The Enchanted at Idiopathic Ridiculopathy Consortium. (Photo by Johanna Austin) @ AustinArt

We’re probably on safer ground talking about a theme. What the hell, I’ll risk it and put one forward: Our world is dominated by successful professional people—businessmen, politicians, and especially bureaucrats—who inevitably lose all sense of imagination and creativity.  It is only the young, the very old, and few precious rebels who can truly dwell in possibility (and even for them, it requires supernatural help).

Speaking of cute, too much whimsy is a common pitfall in putting Giraudoux on the stage—but while Brock and company load on the charm, they always anchor it in something deeper.  Choices here are bold—a visually delightful world that evokes Alice in Wonderland.  Several clever cross-dressed performances (Tomas Dura and Bob Schmidt make an uncommonly convincing pair of town biddies) complement the absurdist tone, and there’s and enough stage illusion to keep even children entertained. The Enchanted is not really a kid show, but I could imagine it would be spellbinding to those who particularly enjoy storytelling.

For the adults, there is deliciously stylized acting from a strong company—my particular favorites include Melissa Amilani as the pompous mayor (shades of the Mad Hatter), Daniel Barland as an appealing and very tangible ghost (he looks like he could be playing football between hauntings), and the mesmerizing, exquisite Jane Moore as the town doctor. And kudos to the puppeteers, who make the ensemble come to life.

Now and again, I detected sections in the text that suggested Brock’s reading of the play is rather anarchic. It may be that The Enchanted really calls for something darker and more serious. On the other hand, I can’t imagine a production that makes it more enjoyable and accessible.  This little gem of a show has something profound to offer.