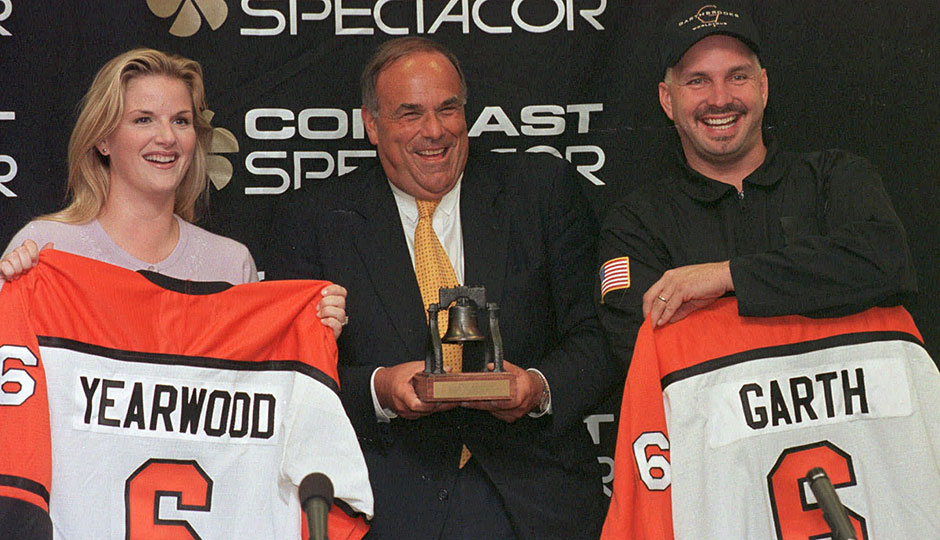 Garth Brooks is coming back to Philadelphia, and people want you to know about it.

Brooks was a megastar. Only The Beatles have sold more albums in the United States. When he last played solo shows in Philadelphia, in 1998, he attracted 115,212 fans to six shows at the CoreStates Center and made $2,509,672. His foray into rock music failed, but dude was still a rock star.

Brooks basically retired after his success in the 1990s, playing only occasionally and selling albums exclusively at Walmart. He played 186 shows at a residency in Vegas over four years, then began his first tour in nearly 20 years in 2014. It’s finally hitting Philadelphia this March, with four shows at the Wells Fargo Center (and two in one day!). Most tickets are the same price ($74.98), which is a pretty cool gimmick. Since it’s 2017, there are also $3,500 VIP packages.

And Comcast Spectacor is really pushing it. I’ve gotten four press releases about it from the WFC. A 40×40 banner was unveiled on the side of the building this morning. There was a promotional blitz for ticket sales for the fourth show, which was added this week and went on sale at 10 this morning. Comcast even tried to get a social campaign going: “Comcast Spectacor encourages all fans to help welcome the iconic country music star to Philadelphia and ‘get their Garth on’ by posting pictures to social media with a cowboy hat and the #GARTHinPhilly.” 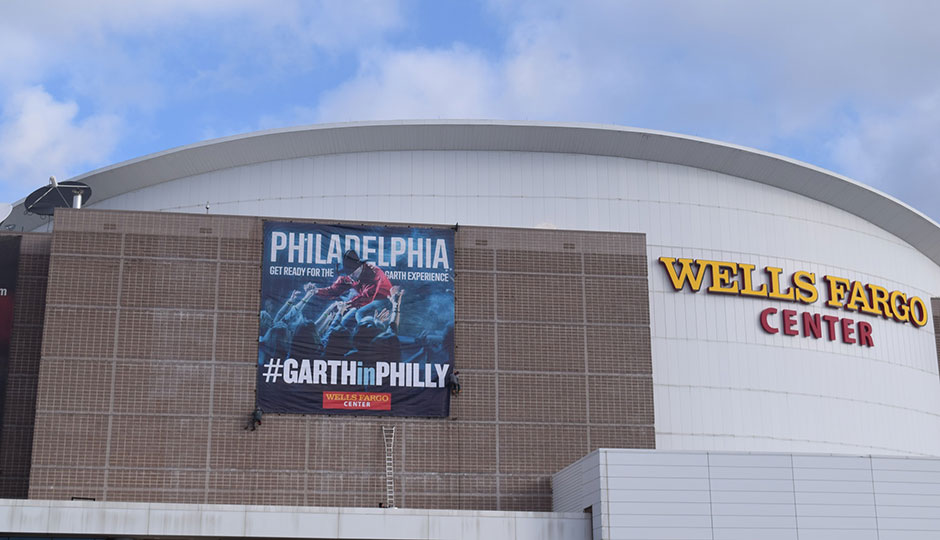 Here’s something that’s not really a secret: Concert promoters and artists don’t really add shows. Garth Brooks wasn’t sitting by the phone, waiting to see how ticket sales went for the first three shows before signaling he was OK with a fourth one. Promoters schedule shows and then hold one back. That way when the show sells out, they “add” another one and formerly grumbling fans are happy. And these contracts sometimes guarantee (if not explicitly) some amount of media exposure in the market. So promoters but up banners and push the media for coverage even for a show that’s almost certainly going to sell out. The media gets free content with a celebrity, so everyone plays along.

That leads us to an interview Garth Brooks did with 6ABC yesterday.

It’s amazing. Here’s how it opens:

Garth: It has. Thank you for the gift of letting me be a dad and raise my kids. I didn’t think there was a greater gift than that, then all of a sudden, you let me do this again, once all the babies were gone, so this has been a wonderful ride so far.

I get what this means: This is Garth Brooks’s canned answer about coming back to tour after 20 years off. He’s telling his fans that they “let” him retire in the 2000s and then “let” him come back for another tour. Okay, that’s cute and normal.

But read that question-and-answer again. It absolutely reads like 6ABC is in charge of Garth Brooks’s life somehow. Was he tricked by the devil into signing away his life and somehow 6ABC acquired the contract? (Working theory: Vernon Odom won the contract when he defeated the devil in a fiddling contest.)

We also get some nice quotes about Philadelphia from Garth Brooks, learn that he and his entourage wear all black and plan on shopping while in the city, and find out that Brooks will be doing a Teammates for Kids charity event while in the city. I really encourage you to read the whole thing. It’s excellent.

There’s one more exchange I’d like to point out:

6abc.com: To get your fans pumped up for the ticket sales, the Wells Fargo Center is asking fans put on their cowboy hats and share their pictures using #GarthinPhilly and “get their Garth on.” Garth, how do you suggest someone to “get their Garth on?”

Just to summarize: “Getting your Garth on” involves “posting photos of being kind to people.” If you’re getting tickets to his show, be sure to do that.