Philly, Are You Ready for Some Esports!?

Now that the Eagles have finally won a Super Bowl, meet our next championship contenders — a squad unlike any hometown team you’ve ever rooted for.

The energy coursed like a wave through the crowd as it let out a collective victory scream. The 450 or so people packed into the University City bar cheered as the Philadelphia squad clinched a win in its first game. On TVs mounted above the bar, one of our top players had leapt a long arc into the air through a barrage of neon-colored gunfire, landed behind the opponents’ line, and exploded in a flash of white. High fives were given, and beer was spilled — at least for a few moments. Then the next game started, and the chanting began: “DE-fense,” stomp-stomp, “DE-fense.” Someone nearby surveyed the scene: “This is surreal.”

Surreal it was. We hadn’t piled into Wahoo’s on a Thursday night in January to watch the Eagles or the Sixers. We were there to see a team called the Philadelphia Fusion play … a video game.

For a guy who grew up when being a “gamer” was likely to score you a wedgie, cramming into a sports bar to watch people play the popular game Overwatch while high-fiving fans pounded Miller Lites was equal parts “I’ve finally found my people” and “Is this actually happening?”

To be clear, we weren’t watching some pickup game between patrons. The Philadelphia Fusion is a professional “esports” team comprised of some of the world’s best video gamers. They’re fighting for a $1 million prize in a league analysts say could bring in $100 million in annual revenue. This is Overwatch League, and Philly is competing. But is this something the city will actually get behind?

Since its release in 2016, the first-person-shooter Overwatch game has experienced a meteoric rise in popularity, boasting some 35 million players worldwide by October 2017. Play pits teams of six “heroes” against each other; one group tries to accomplish a task like delivering a payload while the other tries to thwart it. The heroes represent a diverse mix of genders, ethnicities and species, each inspiring everything from merchandising to memes. 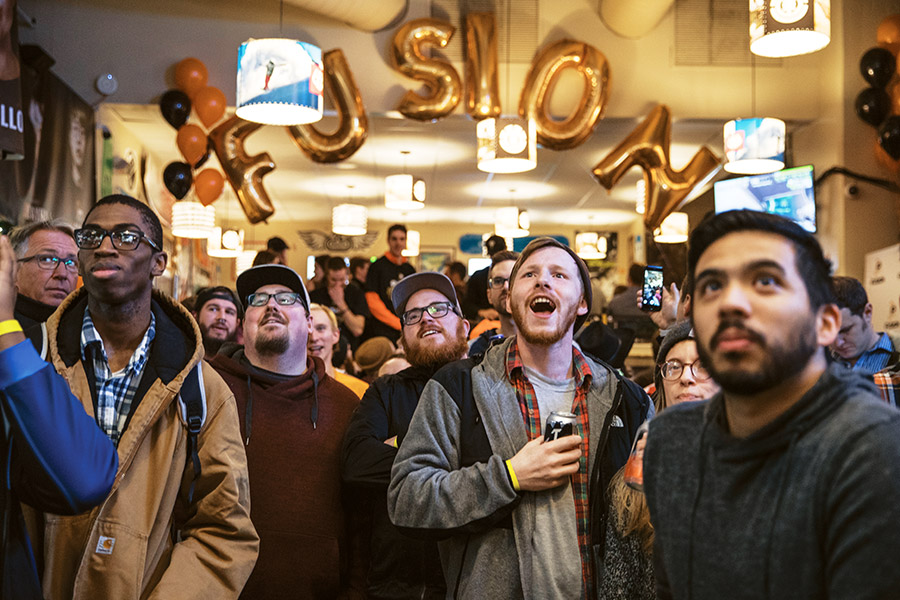 Fusion fans at Wahoo’s for the team’s first game. Photograph by Alex Subers

Overwatch League (OWL) is an entire esports enterprise based on a single game. Matches are streamed online at Twitch.com Wednesday through Saturday during the January-to-June regular season.

While esports aren’t new, two choices by league owner Activision Blizzard are. OWL teams are required to be “geo- located,” or city-based, and teams are franchised. Philly’s franchise was announced in mid-September and purchased by Comcast Spectacor for an undisclosed amount. (ESPN reported the league was seeking $20 million per team). The Fusion’s 12-man roster is made up of four players from esports hub South Korea, six from different corners of Europe, and one each from Israel and Canada. None are from the U.S.

In other sports, we don’t expect our stars to be homegrown. But given the virtual aspect of esports, the question seems more germane: Is Fusion really a Philly team? It is, after all, a roster of strangers playing an odd game under a Philly banner. But when you consider the roughly 300,000 Overwatch players in our region, or the throngs of sweaty fans at Wahoo’s, we seem open to the idea.

So, when can you pack up the family and head to the stadium for a match? Not for a while. The team currently lives and trains near Blizzard Arena in Burbank, California, where every OWL match is now played. That should change as teams relocate operations to their home cities for OWL’s second or third season, when the league will begin “home” and “away” games in earnest. Tim Buckman, a Comcast Spectacor spokesperson, assures me there are plans to establish a home base here, complete with a state-of-the-art esports venue, though neither the team nor the league has a definitive timeline. Judging by opening night’s enthusiasm, it’s a good bet that when the Fusion builds it, fans will come.

Published as “Are You Ready for Some Esports!?” in the March 2018 issue of Philadelphia magazine.