The Miracle Worker of 13th Street 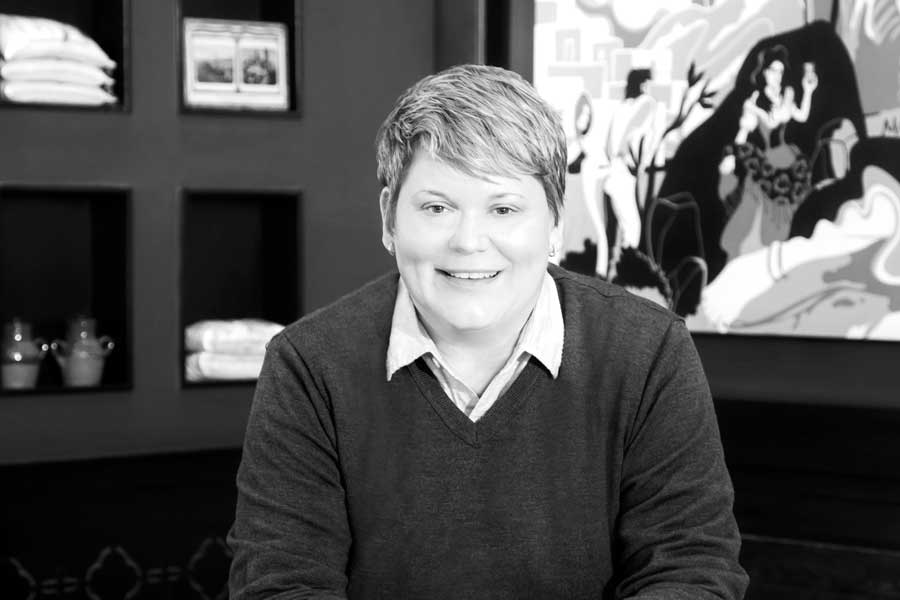 If you’ve eaten anywhere in the Gayborhood, chances are you’ve tasted one of Marcie Turney’s creative culinary takes. After all, she practically owns 13th Street with her partner Valerie Safran. They’re the masterminds behind nine restaurants and boutiques, all credited with transforming the once-desolate red-light district.

Growing up in a midwestern restaurant family, Marcie Turney’s grandparents Bud and Marilyn inspired a love of food early on inside their Ripon, Wisconsin supper club, The Spot. “I remember sitting at the countertop every family party, holiday and birthday, drinking Shirley Temples,” says Turney. “That was the most exciting thing in my life.”

But despite her fond memories of restaurant life, Turney had no intention of following in her grandparents’ footsteps, focusing instead on sports and art. The James Beard semi-finalist actually made her way to Philly on a sports scholarship to play field hockey at Temple University where she studied graphic design. It wasn’t until her sophomore year that she began to question her connection to art and shift her ideas about her future. “They turned my art program into a digital focus, and I was out,” she says. “I left school and started working in a restaurant instead.”

She took a job making salads at Judy’s on South Street while studying at The Restaurant School in West Philly. After a few stints as a grill cook, line cook, and sous chef at eateries across the city, and executive chef at Audrey Claire, she was named head chef of Valanni, a restaurant that would change the course of her career (and personal life) forever. There, she met Valerie Safran, a Spanish teacher who worked as a part-time server on the weekends to make some extra cash. “She lived in the city and worked there to pay for parking,” Turney laughs.

The two fell in love and in 2002, opened their first venture together—a home store, called Open House. “Val was so unhappy teaching and always dreamed of owning her own shop—I told her to do it,” says Turney. Excited, but slightly terrified, they sought the advice of former boss, George Anni. “He told us that the biggest risk is not taking a risk at all,” says Turney. “I still live by that today.”

They found a small but sweet Tony Goldman property on 13th Street (the only spot they could afford) and opened their own shop on credit cards with zero percent interest. Within three months, they expanded the shop into the next storefront to keep up with demand and increase inventory. “People just came, we couldn’t believe we were actually making money,” says Turney.

One thing led to another and next came Lolita, a BYOT (bring your own tequila) spot across the street from Open House, paid for by Turney and Safran’s scrimping and saving, $30,000 in equity on Turney’s home, and a little help from Tony Goldman. Once again, they struck gold, this time winning over the foodies of Philadelphia. Soon after came a little lunch spot called Grocery on the corner of 13th and Chestnut serving ready-made soups, salads and sandwiches, a gap in the local market Turney had resolved to fill. Then came Bindi, an Indian joint directly across from Lolita, that racked up James Beard nominations but missed the mark with the community. “There was too much of a disconnect,” says Turney. “I had to put my ego aside and accept that it was failing.”

She pivoted the space into Jamonera, a cozy tapas spot, while opening Verde, a floral and chocolate gift shop (also home to Turney’s line of chocolates, Marcie Blaine Artisanal Chocolates) and Barbuzzo, her renowned Mediterranean restaurant across the street. “We were actually going to sublease the space where Barbuzzo is; we thought it was too small,” laughs Turney. “It’s hilarious since that’s our golden child.” Admittedly, she’s still wowed by the acclaim Barbuzzo’s received. “There’s something special there that we can’t even put our finger on or recreate,” she says smiling. “But at the end of the day people like that it’s intimate. They feel like they’re in the know.”

Of course, Turney and Safran didn’t stop there. They later opened Little Nonna’s around the corner on Locust, a nod to the Italian-American food of South Philadelphia, and Turney’s most personal business to date, Bud & Marilyn’s, an eclectic kitchenette and homage to her grandparents that serves good old-fashioned comfort food.

In 2018, the pair announced the creation of the Safran Turney Hospitality Group and their plans for a new venture on the 1300 block of Passyunk Avenue. “It scares me to go to South Philly; we’re going out of our comfort zone,” says Turney. “But 13 is our lucky number!”

What might seem to some like an overnight success took more than 16 years of nonstop work and planning to pull off. “It’s not easy,” says Turney. “You have moments where you fail, but you have to push forward and find a way to get out of it. I love figuring out how to fix it.” Her unending optimism and unstoppable work ethic have proven that passion and hard work can pay off. “You have to get up every single day and make sure rent gets paid,” says Turney. “It doesn’t matter if so-and-so called out sick, I’m always going to show up.”

In an industry notorious for valuing men over women, Turney’s managed to pave a path for herself and other women. Less than 20 percent of the country’s restaurants are run by women—Turney runs five of Philly’s most successful eateries, managing more than 290 employees, many of whom are women.

Unsurprisingly, Turney’s also got a different take on management than most chefs, too. When something’s not working, she pivots; when someone screws up at work, she doesn’t act rash. “If you sink the ship one night, you buy a 12-pack, and everyone drinks it after close,” laughs Turney. “No one’s perfect, everybody slips up—have a drink and move on.”

With an array that spans Mexican, Spanish, Mediterranean, Italian, artisanal chocolates and American comfort food, it seems there’s nothing Turney can’t tackle. But despite all of her entrepreneurial success and culinary acclaim, Turney insists she’s just entered the most rewarding role yet—motherhood. A longtime dream of Turney and Safran’s came true in late 2018 with the arrival of their baby girl, Harlow. “We’ve wanted this for a while, ” says Turney. “We’ve worked hard to get to a point where we have people we can depend on, so we can devote our time to her.”

As Turney enters her next exciting chapter, she’s reflecting on how she got here in the first place. What does she consider their recipe for success? “People think we’re so smart, but we just bought and built within our means,” she says. “Everything happened at our pace, on our terms, with our own money.”

Philadelphia magazine’s Trailblazer Award is an initiative founded 15 years ago to honor and celebrate women in the Philadelphia region who are pioneers within their fields,  successful leaders and who have made considerable contributions to their respective peers and community.