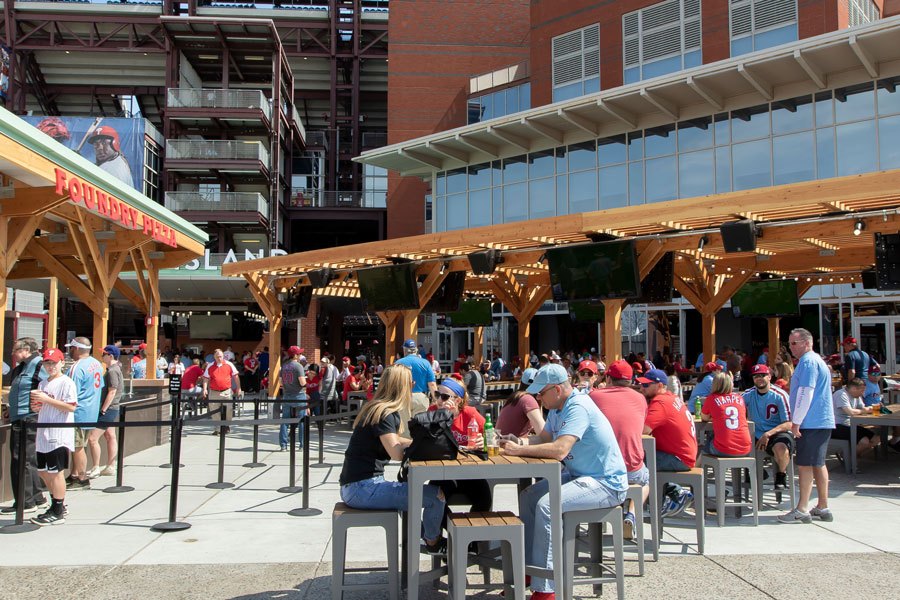 Citizens Bank Park has regularly made the headlines throughout the past few months, and for good reason—the Phils are off to a hot start, the iconic Liberty Bell from Veterans Stadium has made a shiny new debut outside the Third Base Gate and who can forget about Philly’s newest golden guy, Bryce Harper. But one exciting ballpark enhancement you might be missing out on are all of the incredible new eatery options. Gone are the days of nibbling on some peanuts and crackerjacks as the boys played ball. Today, Citizens Bank Park has seriously upped their foodie game.

Here are some of the latest sip and snack additions you need to check out:

The piece de resistance of all of the recent eatery renovations has to be Pass and Stow. Named after the Philadelphia Foundry workers, John Pass and John Stow who fixed the Liberty Bell after it cracked in 1753, the historic homage is already a grand slam with local fans. Located by the third base gate inside the ballpark (the former site of McFadden’s Restaurant & Saloon), the beautiful new space features an indoor eatery, outdoor beer garden, Goose Island at the Park Bar, Foundry Pizza and specializes in local brews and twists on classic Philadelphia foods.

The open-air venue is full of fresh décor (think traditional beer garden picnic tables, sleek fire pits and a pergola) and is open 2 hours before each home game and at least an hour postgame – making it the ultimate space to prep or unwind for the big game with friends. There’s even an Instagram-worthy water feature showcasing the Phillies logo, as a focal point in the outdoor garden.

Once you enter the Third Base Plaza, you’ll have the option for not only amazing local brews, but also mouth-watering meal options like brick oven pizza. Outside by the new Goose Island at the Park Bar you’ll find Foundry Brick Oven Pizza. Nosh on some cheesy, freshly fired up personal pies while you watch the action of the game unfold on one of the forty-four HD TVs surrounding you.

Just behind home plate and next door to Pass and Stow, Shake Shack has set up its first ever sit-down restaurant inside of a sports venue. Indulge in their beloved burgers, crinkle cut fries, hand-spun milkshakes and more.

Everybody’s favorite Philly born musician, Questlove debuted a vegetarian cheesesteak this year. You read that right—this take on the traditional meat-lovers’ meal is built with Impossible 2.0 meat, instead of beef, and topped with white cheese sauce and sweet pepper relish. Some of the other new fan favorites include tandoori chicken wings, vegan lettuce wraps, loaded bacon topped tots, and the super delicious doughnut burger—made by layering a bacon cheeseburger between a glazed doughnut. Bon appétit!

Sit back and watch the Phillies with a burger and a brew at one of the new and improved Citizens Bank Park eateries and bars.