Philly Is a Hotbed for Life Sciences Talent, According to a New Study 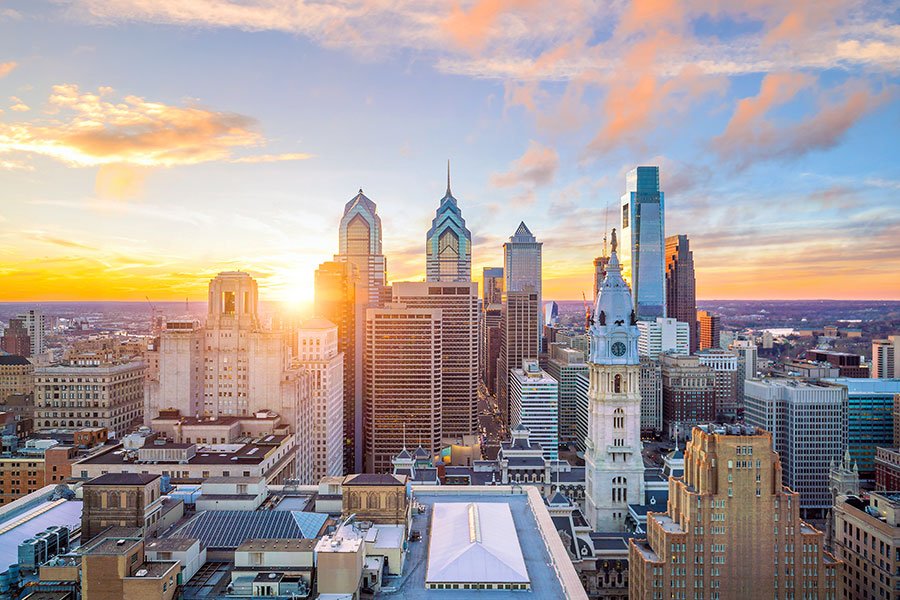 For the past century, Philadelphia’s been a hub of healthcare innovation and activity. It’s at the forefront of finding cures for infectious disease, was the first to diagnose AIDs, and is home to one of the best children’s hospitals in the country (CHOP is ranked third in the nation). With world-renowned hospitals, doctors and medical schools, Philly’s a hotbed of talent and according to a new study conducted by CBRE, the world’s largest commercial real estate and investment firm, it’s not slowing down.

CBRE’s latest study ranks Philadelphia as the eighth leading cluster for the life sciences industry in the United States in 2018. How has Philly landed at the top of the ladder? The region’s premier education and health institutions will always ensure the region has a long-term competitive edge. CBRE Research also ranked Philly fourth in the country for its leading hospitals, medical research institutions, universities and talent. 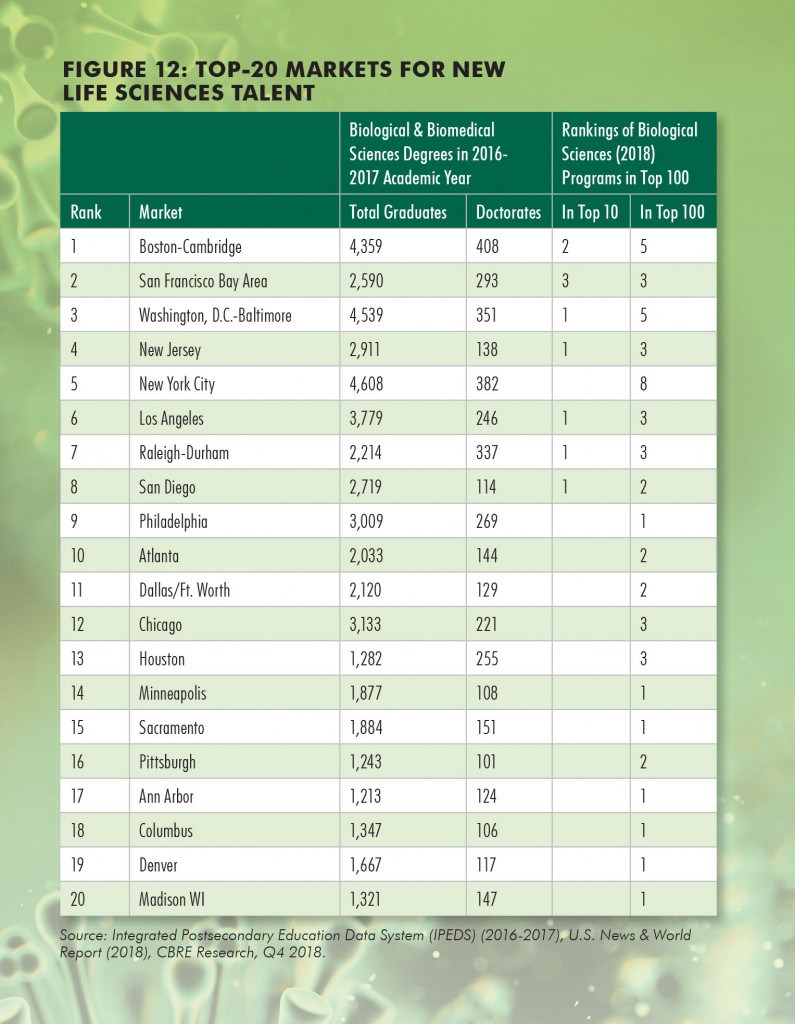 But the innovation and talent residing across the area weren’t the only factors leading to the city’s life science ranking. There was also a surge in venture capital funding in the past year. In 2018, Philly saw the largest investment growth in ten years, sparking business growth and new job opportunities.

Between October 2017 and September 2018, venture capital investments in local life sciences companies reached an all-time high, hitting $750 million. Philadelphia‘s extraordinary growth in life science ventures was supported by a $50 million investment pledge by the University of Pennsylvania to be distributed over the next three years. 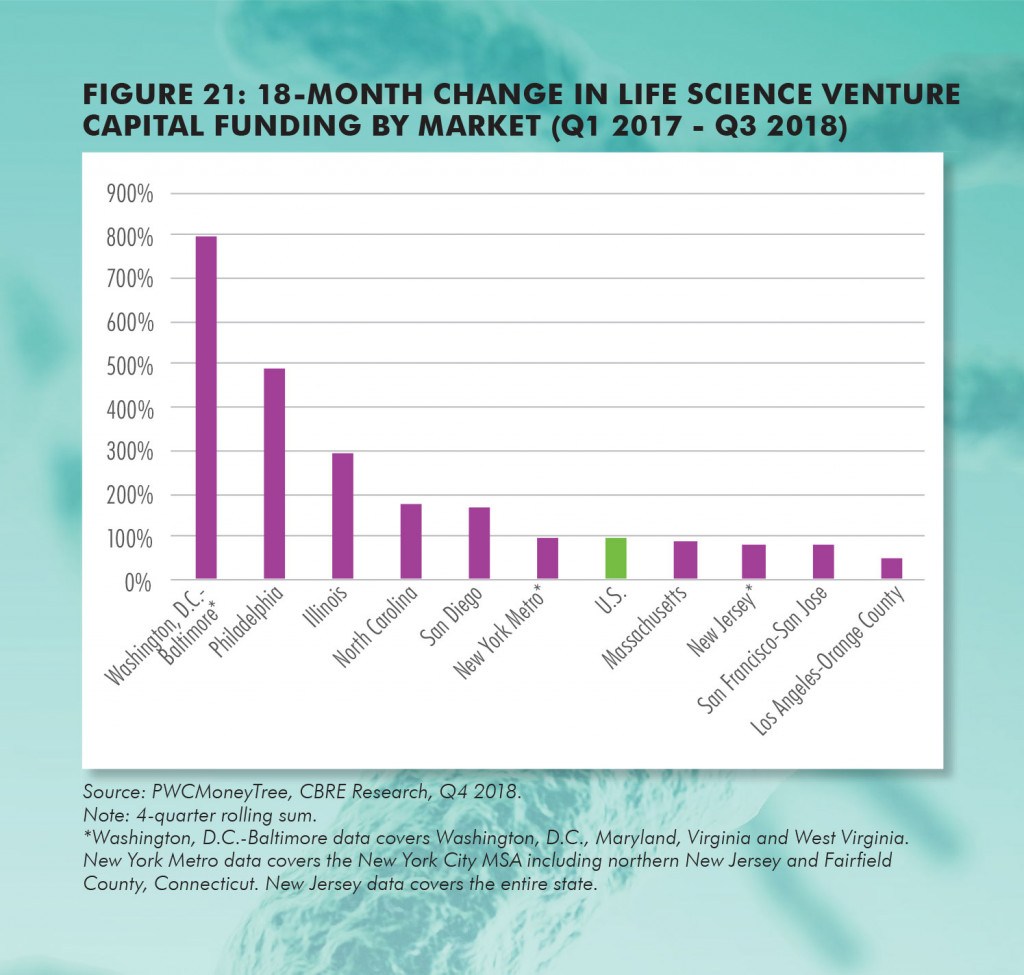 So, what does this mean for Philadelphians? It means a plethora of new jobs and opportunities, a growing real estate scene, and a better reputation across the country. Within the next decade, an estimated 8 million jobs will be available in STEM fields, particularly the life sciences. Asserting itself in a fast-paced space, like the life sciences, puts Philadelphia at the forefront to be a national, if not global leader someday. The life sciences industry is growing at its fastest pace since 2000. With a 3.2% employment growth in the past year, the industry is far exceeding the nation’s 1.7% growth during the same time period.

The local investment being put towards life sciences has a positive impact on the city beyond the employment rating. Real estate vacancies, particularly in University City, what CBRE calls the “hotbed” for life sciences have been the lowest in their history. In fact, University City has the lowest vacancy rate of the entire city. Other areas of growth include, the Navy Yard and the expansive suburbs, home to life science giants, (rebranded as Spring House Innovation Park) and GSK.

CBRE projects continuous growth in Philly’s healthcare business in the coming years as long as there’s a steady set of our most valuable asset—people.  Philadelphia has the eighth largest population working for life science companies of any market in the country, plus it’s home to the sixth largest number of Biomedical engineers, Biophysicists, Biochemists and chemists.