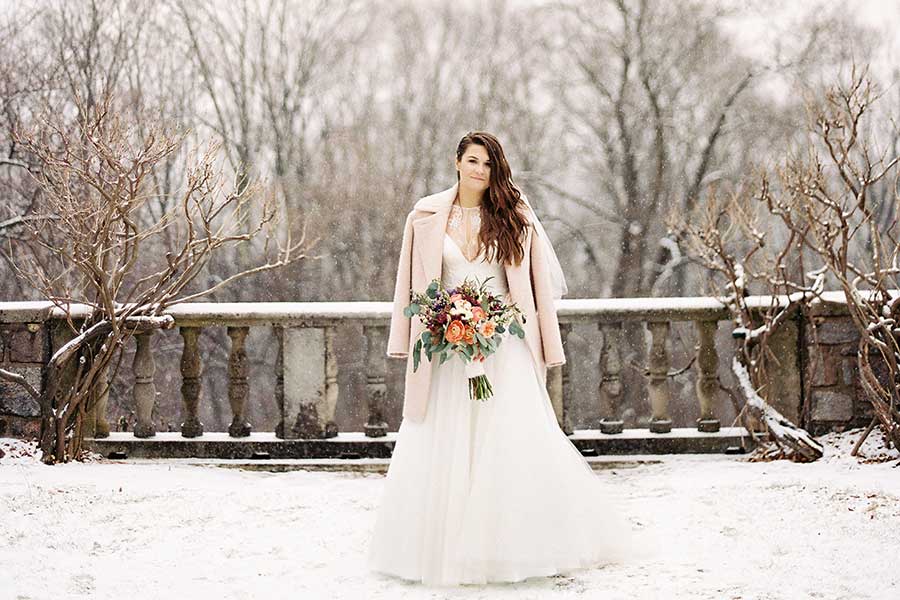 After shooting professionally for 15 years, Jordan Brian has seen some crazy weather—and even crazier bridal parties. Fortunately, rain on your wedding day (and other bad forecasts) can actually add character and personality to your photographs and makes your day that more unique.

You can’t control the weather, but you can control your attitude towards it. If it rains, you bring umbrellas. If it snows, you wear boots. If it’s hot and sunny, you protect yourself in the shade. No matter the conditions, you have your friends and family with you to just have fun. You only do this once, so live it up! 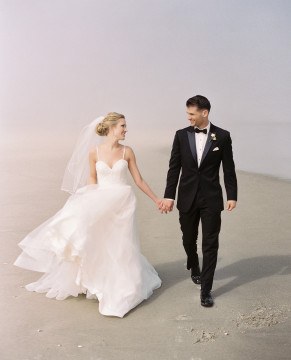 Ah fog, rain’s misty cousin—one of the rarest and coolest weather patterns. It’s more common with beach weddings, but it can happen in cities too. Jordan recently photographed a wedding in Philadelphia where it rained all day and got warmer at night. The fog covered City Hall and looked incredible when they went out for shot night portraits.

Jordan also photographed a wedding in late Spring at Icona in Avalon, NJ, and a thick blanket of fog covered the beach. The couple’s first look was on the dunes with a hazy ocean background, offering a dreamlike feel to the photograph. “It was as if Bob Ross painted happy little patches of fog everywhere,” he says. 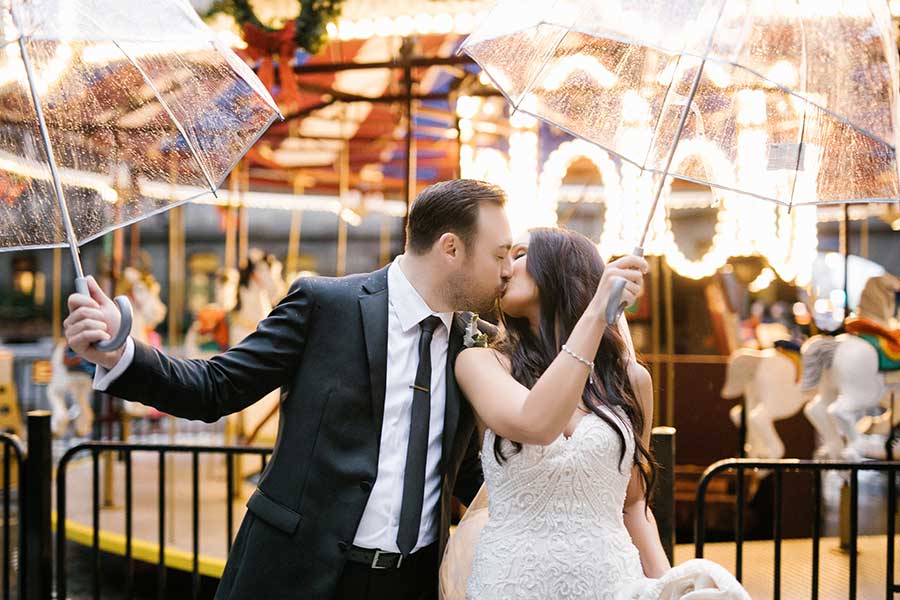 Rain is obviously the most common weather complaint, and the one that causes the most stress. “What do we do if it rains?!” is one of the first things couples ask Jordan when he meets to talk about their day. Before the wedding, he discusses a backup plan for the “in case.”

“I have many locations to shoot in Philly if it rains,” he says, “depending on how heavy the rain is and also the wind direction and speed.”

For brides and bridesmaids, Jordan recommends the clear, dome shaped umbrellas. To cover everyone in the bridal party, he suggests giant golf umbrellas. “You can fit two under it comfortable and it looks great in photos.” 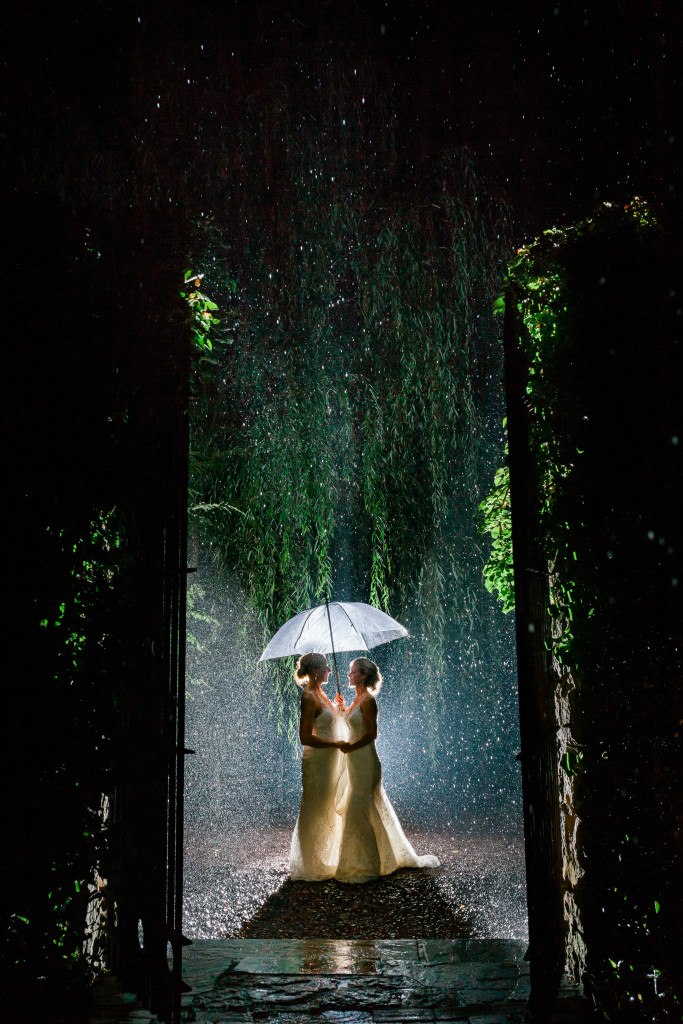 “Night rain is perhaps my favorite thing ever!” Jordan says. “I always tell couples that I hope it rains during their reception.” It may sound weird but rain at night can help create some of the best night portraits. Jordan’s strategy is to bring couples outside during the reception (usually after the cake cutting) to do a few portraits because it adds a one-of-a-kind perspective to the wedding day. As Jordan say, “Throw some rain in and you just won the lottery.” 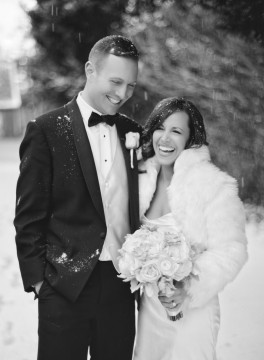 Fog, rain, or passing storms can be problematic, but not as much as wedding day snow. Most places often close due to snow storms—except Wawa.

Jordan recalls a night before a January wedding in Philadelphia he was hired to shoot, when it snowed over a foot. While beautiful, the turn in the weather obviously, caused a bit of stress and some change to the photo plans. His talked with the couple and made sure everyone had boots and jackets (and a warm drink), and they were able to carry out the plan as usual. “I did their portraits in a park by the church, and the snow just added that next level to their photographs,” he says. 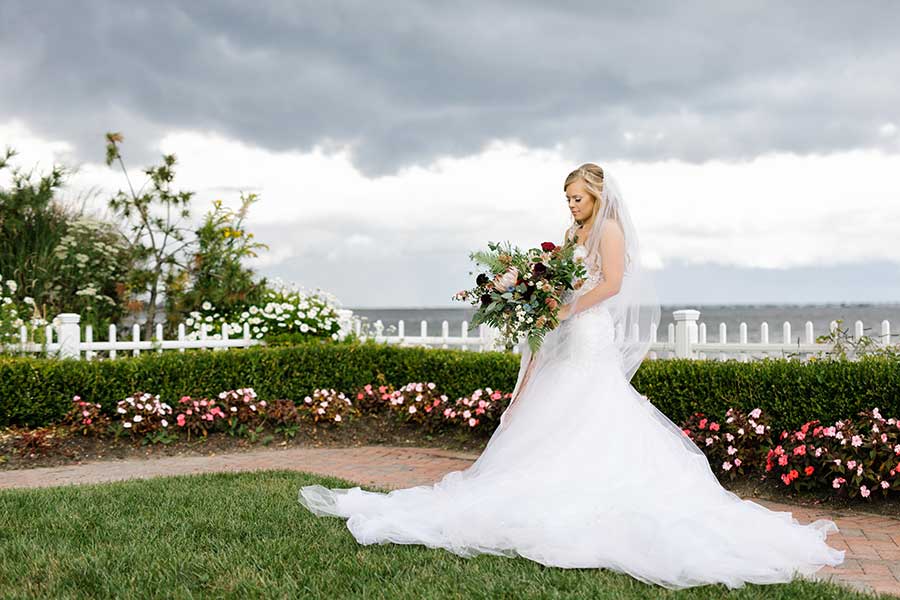 Passing storms are amazing but very fickle, and hard to predict. “But the benefit of these changing weather patterns are amazing skies with cool cloud formations and colors that are often otherworldly”, Jordan says. During the day, you often find dark, beautiful dark clouds rolling in the background while it’s still bright and sunny.

“I have some couples that want to reschedule their engagement sessions or have an indoor plan for their wedding when we have a chance of storms,” Jordan says. “I get it. Nobody wants to be stuck in the rain… especially on their wedding day. But! Passing storms are the best!!” Jordan always prepares for coverage in the case of some rain (giant golf umbrellas, cars, your venue, etc.). “Trust me,” he adds, “It’s worth it.”

“I love photographing weddings; the fun, love, and joy between couples, their friends, and their family is the reason I do it,” Brian says. “When we get to mix in something out of the ordinary, such as weather, it adds that extra exceptional touch to your day.”

This post was produced and paid for by Jordan Brian Photography