Warby Parker finally opened in Rittenhouse and everyone rejoiced. Everyone except Philly EyeWorks. 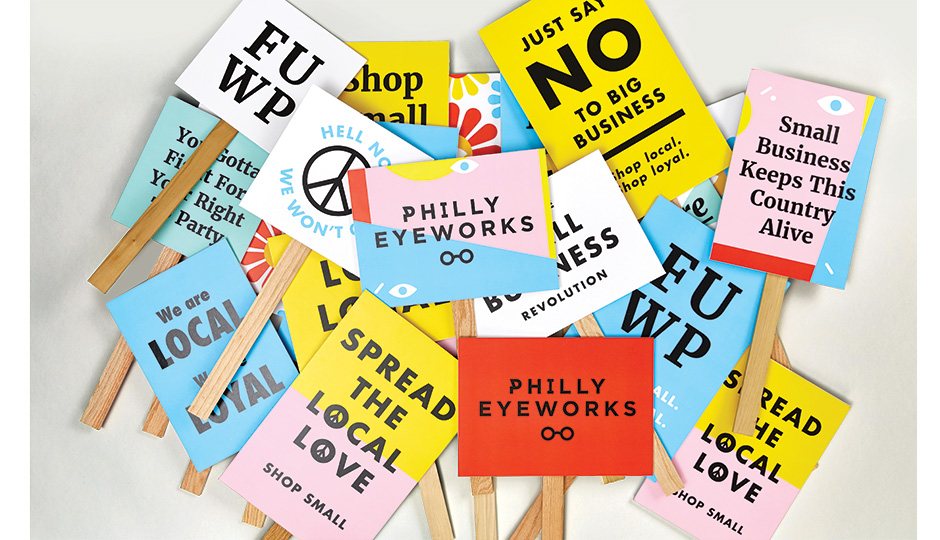 On Saturday, January 28th, as eyewear brand Warby Parker feted the grand opening of its sparkly Walnut Street storefront, seven demonstrators stood outside, pumping candy-colored signs into the air and doling out cards emblazoned with “FUWP.” While the rest of the city was dizzy with excitement over the brand’s arrival, the ragtag group picketed, imploring Instagram followers to take photos with a #FUWP sign and post them online with the corresponding hashtag; randomly selected winners would win a free pair of Philly EyeWorks specs. For a protest, it was kind of, well, cute.

Leading the resistance was Philly EyeWorks’s Clifton Balter, who first faced off against Warby Parker back in 2012, when the latter parked its school bus — a roving eyewear shop on a cross-country “class trip” — outside InnerVision, his Rittenhouse eyeglass boutique, for two consecutive Saturdays. Sales tanked during this time (falling to about half the average, Balter says), and his anger was stoked. Adding fuel to the fire: He then had to stand by and watch as Warby Parker’s profile skyrocketed. (Launched by Wharton students who soon fled Philly for NYC, the start-up quickly vaulted to unicorn status, achieving a $1.2 billion valuation.)

To stay relevant in an evolving retail landscape, or, more likely, as a direct response to the void Warby Parker left, Balter and his wife, Emily, launched Philly EyeWorks in 2014. They framed the venture as a funkier, less expensive addition to the posh pairs sold at InnerVision, but the parallels with Warby Parker are striking: Both sell inexpensive glasses. (Warby’s start at $95; Philly EyeWorks’s, at $145.) Both nod to Philly. (Warby Parker named a pair “Franklin” after the pub where the company was founded; the entire Philly EyeWorks line sports names like “Yo Adrian,” “Whiz Wit” and, er, “Franklin.”) And when Philly EyeWorks first launched, it offered a suspiciously Warby Parker-like service whereby customers could select styles online, for free, and try them on at home. (They’ve since stopped offering this, citing cost reasons.)

The companies played nice for a year, until news broke that the prodigal son was returning: Warby Parker was opening a shop in the old Le Bec-Fin space. (Until then, its only local presence was a showroom in Old City’s Art in the Age.) The Balters weren’t caught off guard — “They had been opening so many stores in every big city that we were actually surprised it took them so long,” says Emily — but they still prepared for battle, in the form of a revamped website (with an entire section devoted to explaining the FUWP resistance) and a multi-platform marketing campaign with slogans like “We Are Local, We Are Loyal.”

It’s a David vs. Goliath battle, starring two brands vying for hometown-hero status — one for bringing Philly’s start-up scene to the national spotlight, and the other for, well, staying here. “We want to represent the city,” says Balter. “We weren’t looking for global domination with our brand.” Zing. Still, Warby Parker claims it never really left the city. “We probably spend more time in Philly than [in] any other city outside of New York,” says Warby Parker co-CEO Dave Gilboa. He’s seen the FUWP campaign: “We have no ill will against them or anyone else,” he says. “We welcome fair competition.”

Philly EyeWorks has pivoted accordingly. For a company not seeking global domination, its wholesale line is booming, available in nearly 50 boutique eyewear shops nationally. Months after Warby Parker’s grand opening, Philly EyeWorks revenue is three times higher than at this time last year. Who knows? Maybe there’s a school bus in its future. And if that’s the case, Balter sure knows where to park it.

Published as “This Is War” in the May 2017 issue of Philadelphia magazine.