This imposing yet charming house, built on one of the first lots to be sold in Wendell and Smith’s upscale development, has room enough to house a large family and entertain on a grand scale. 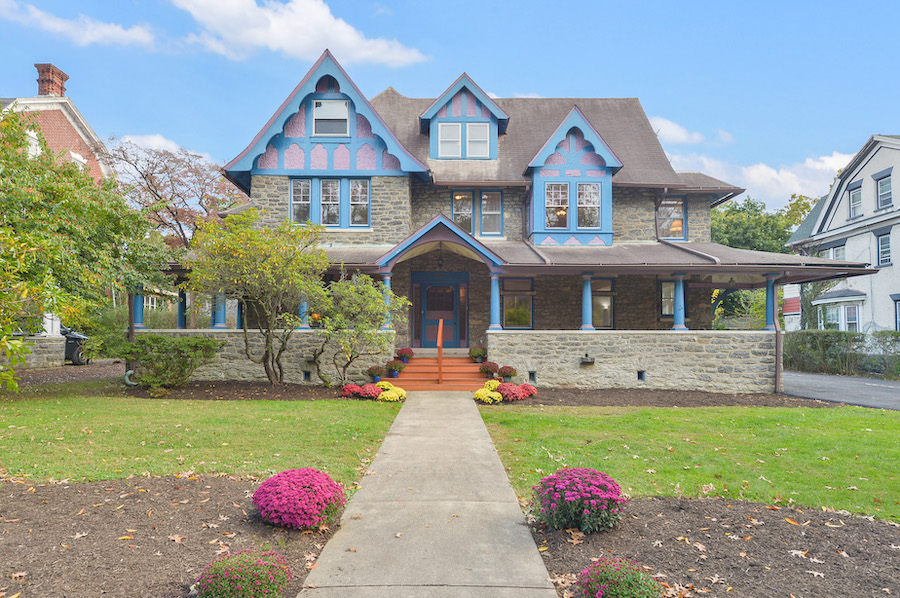 A path lined with azaleas and a front yard studded with mountain laurels make an attractive gateway to this grand yet charming house at 5844 Overbrook Ave., Philadelphia, PA 19131 — one of the original houses in the pioneering 19th-century Overbrook Farms subdivision, the only Main Line community on the Philadelphia side of the county line. / Photos: Berivan Ortega, Kuman Photography, via Keller Williams Main Line

“Old Maids Never Wed And Have Babies” is the mnemonic device used to remember the names of the first seven stations on the storied Main Line of the Pennsylvania Railroad.

It wouldn’t have worked had the first station kept its original name of City Line, but fortunately, in 1867, the Pennsy built a culvert to carry a small stream beneath its tracks next to the new station it built on the site. It then dubbed that station for its location over the brook.

And in the late 1880s, Anthony J. Drexel’s banking house, Drexel & Company, bought about 168.5 acres of farmland surrounding the station from the estate of John M. George, whose family had owned the land since the 1770s. And with that purchase, Overbrook Farms was born.

Drexel left the job of creating Overbrook Farms to developers Herman Wendell and Walter Bassett Smith, who by then were also busy building other subdivisions further out on the Main Line. The development proved popular from the start: According to Tello d’Apery’s 1936 history of the community, by 1912 just about every lot in the community, begun in 1893, had been built upon by “people of refinement, intelligence and wealth,” as an 1899 promotional brochure published by Wendell and Smith described the buyers of Overbrook Farms lots.

I would say that whoever built this Overbrook Farms Queen Anne house for sale — House No. 30 on the original plan, according to Keller Williams Main Line agent Janet Ames, who is marketing it — definitely had plenty of wealth and refinement, judging from its size and elegance.

According to Ames, who bought this sprawling house in 1982, the Overbrook Farms development company sold Lot No. 30 sometime around 1895. Whoever bought it took their time putting a house on it, for public records list its construction date as 1906.

Whoever architect William L. Price designed this house for had a large family and several servants, judging from its 10 bedrooms. They clearly also enjoyed welcoming guests into the house, for it has plenty of room for entertaining as well. 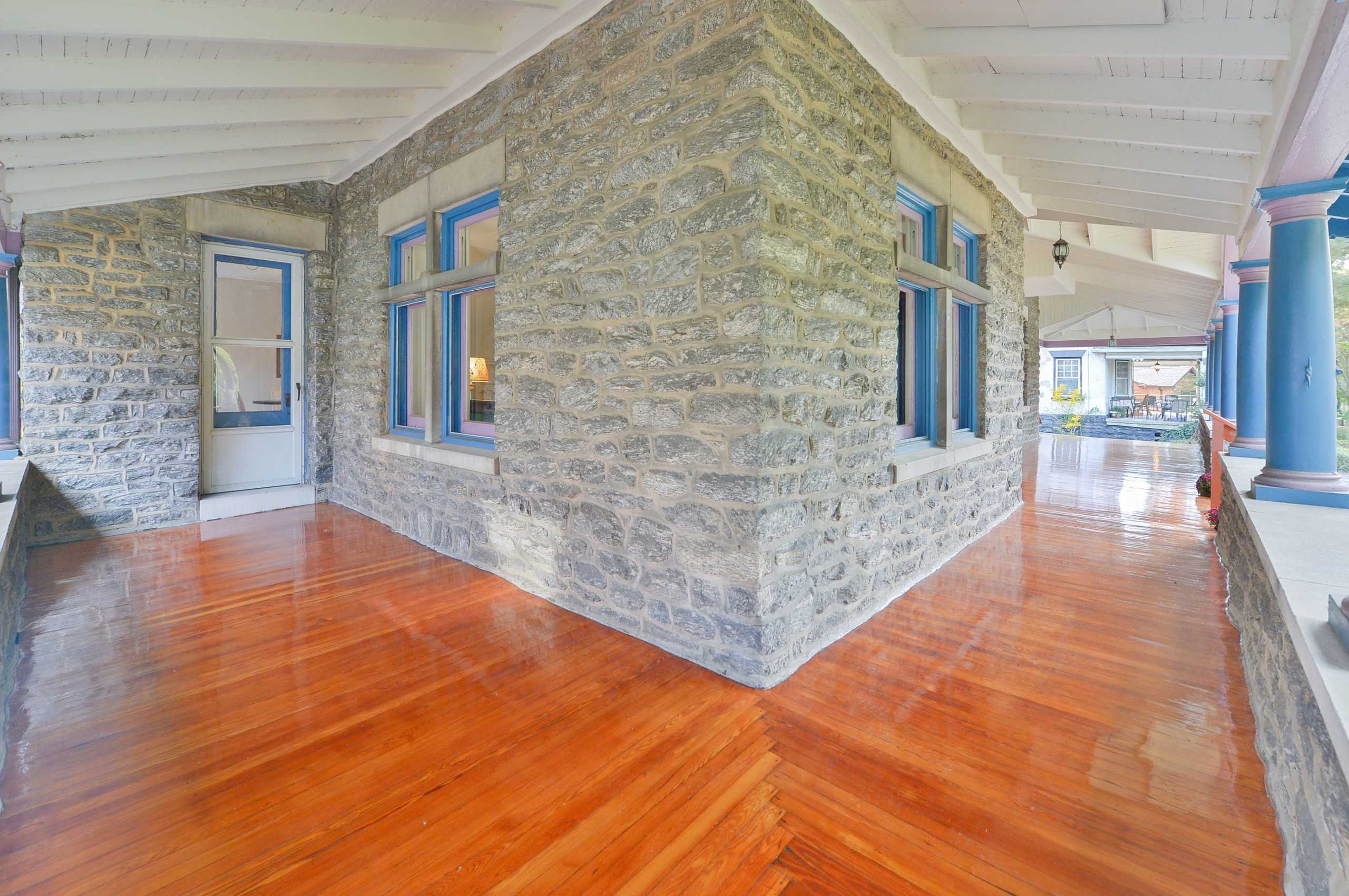 The large wraparound front porch makes a fitting gateway to this house. And as you can see, its hardwood floor has been restored and polished to a high gloss. The stone in this house, like the stone in every other Overbrook Farms house, came from quarries set up in the subdivision as it was being built. 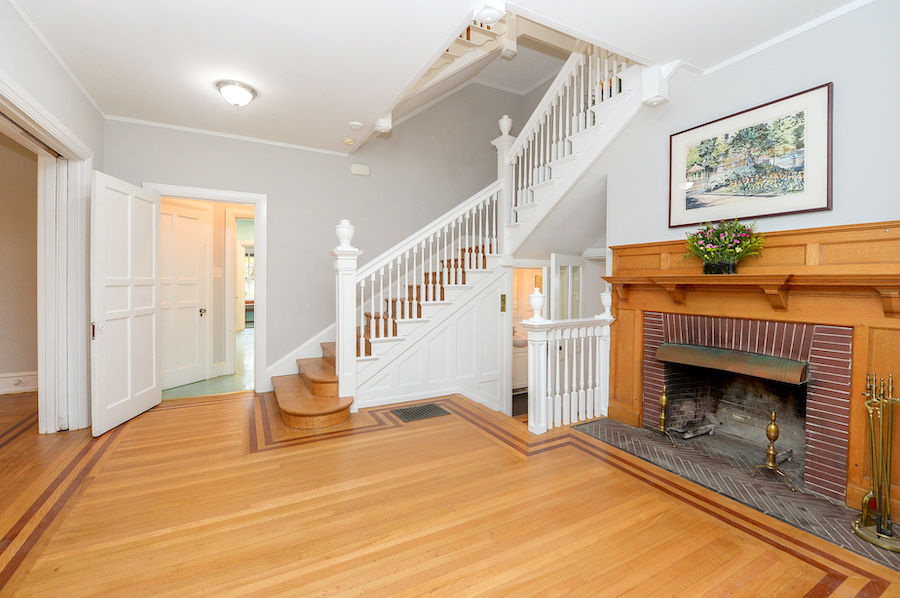 Walk through the original front doors and you enter a large foyer with a three-story-high central staircase and an original fireplace. All of the fireplaces in this house are currently decorative but can be fitted with gas inserts. The original oak floors with walnut inlays have been restored and refinished throughout the house. 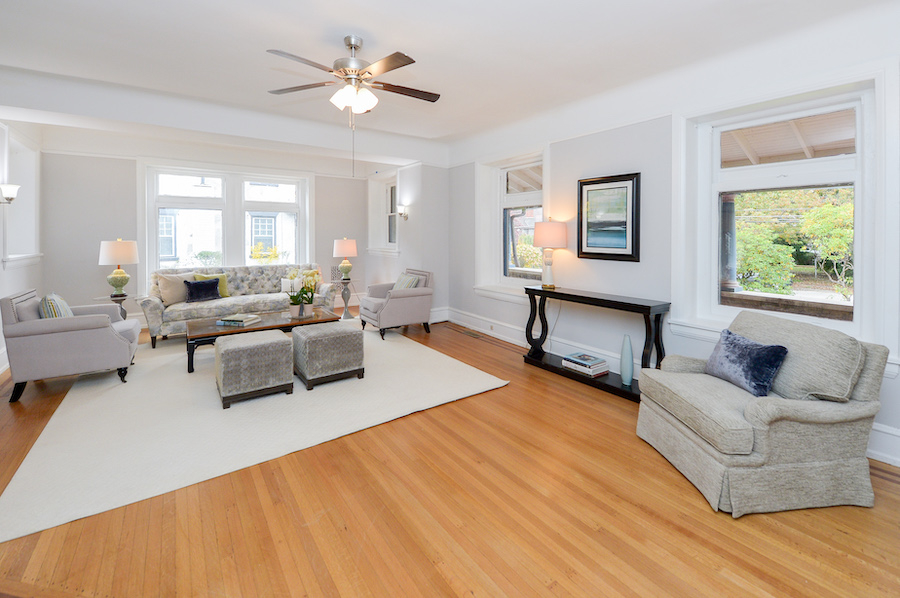 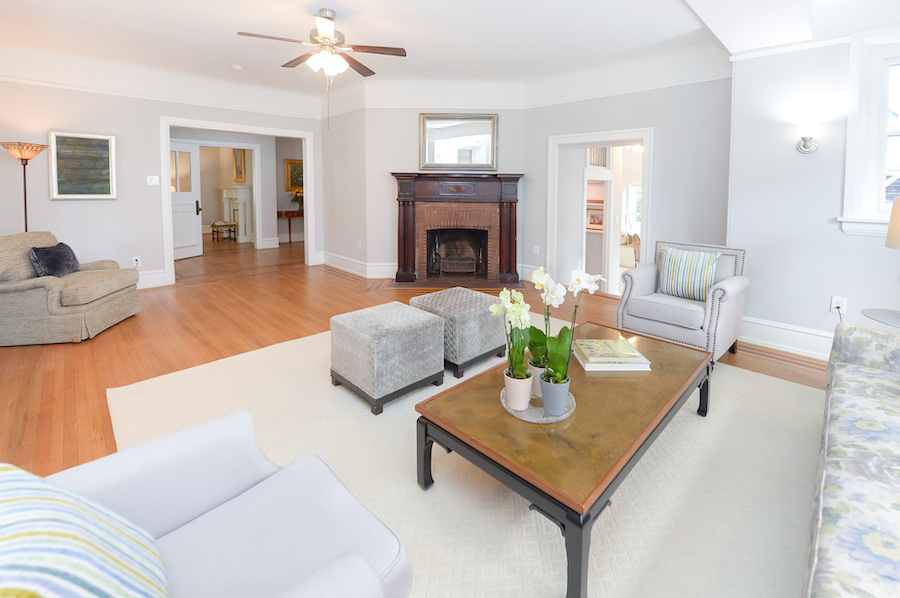 To the right of the foyer, the spacious living room also has restored original flooring, a fireplace, and large windows looking out on the driveway and front porch. 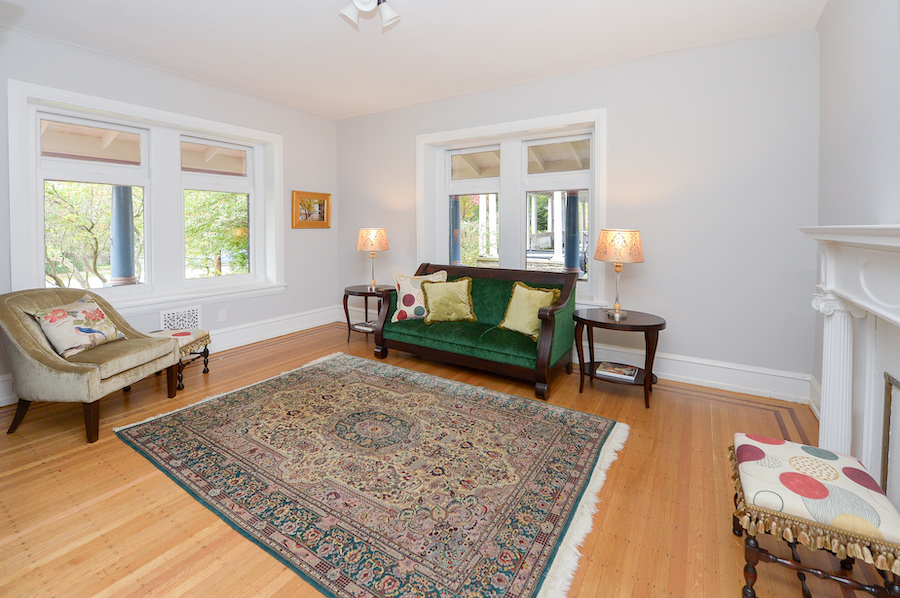 To its left, the library and parlor has an original built-in bookcase and a purely decorative fireplace. 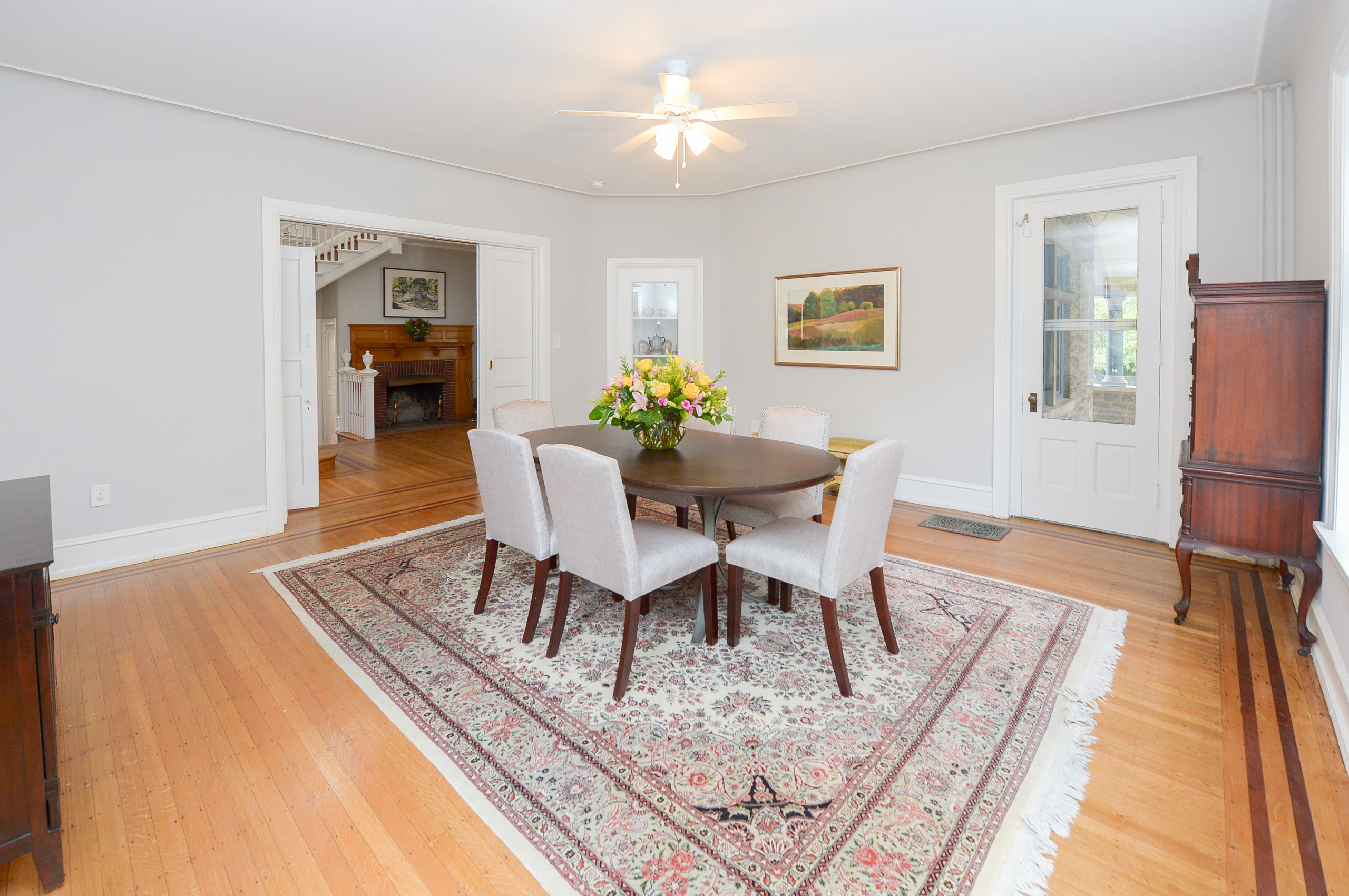 Behind the parlor lies the formal dining room. It has a built-in china closet and a door leading to the front porch. 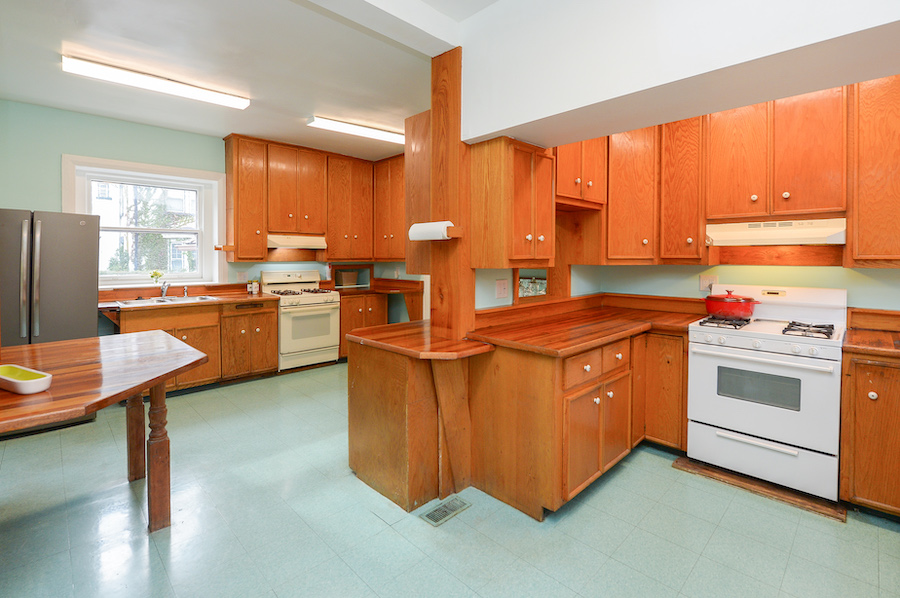 And behind the dining room and foyer sits this very large kitchen. Ames had this kitchen built shortly after buying the house, and it’s definitely outfitted to feed a crowd, with three separate preparation areas with ranges. 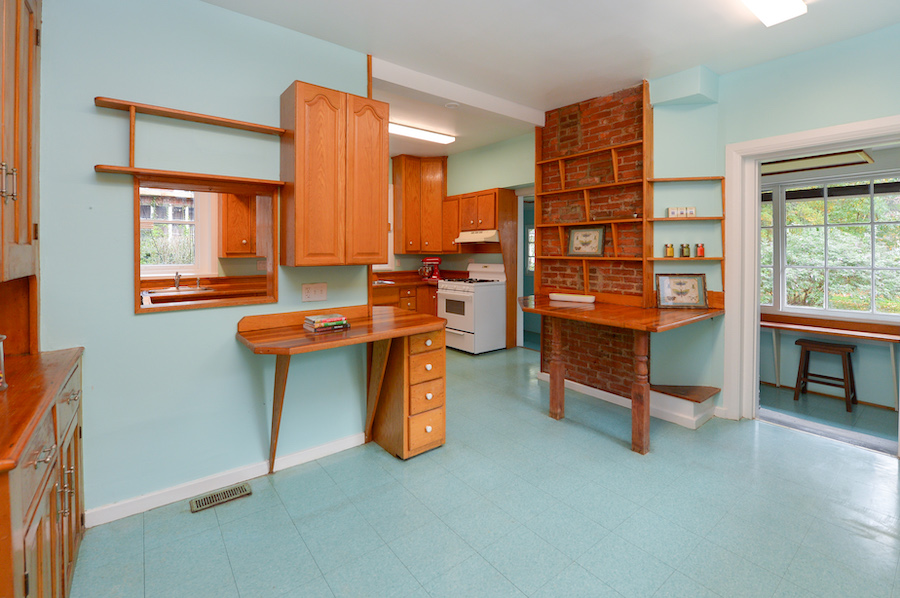 If you’d like to throw a dinner party and serve both kosher and non-kosher (or halal and haram) fare, this is the kitchen for you, for no pork or shellfish dishes have ever been prepared in it. You will, however, want to purchase additional refrigerators and freezers to augment the stainless-steel one that’s there now. 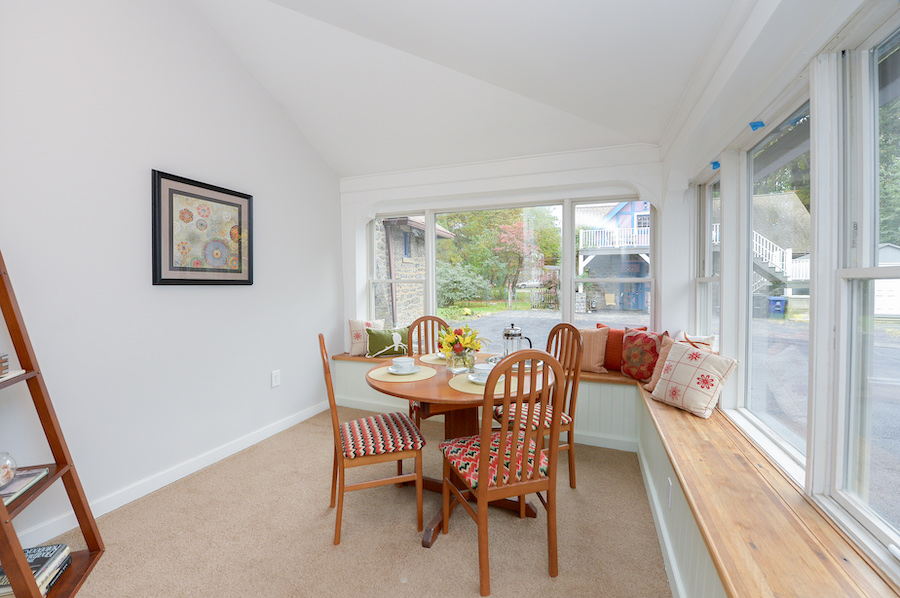 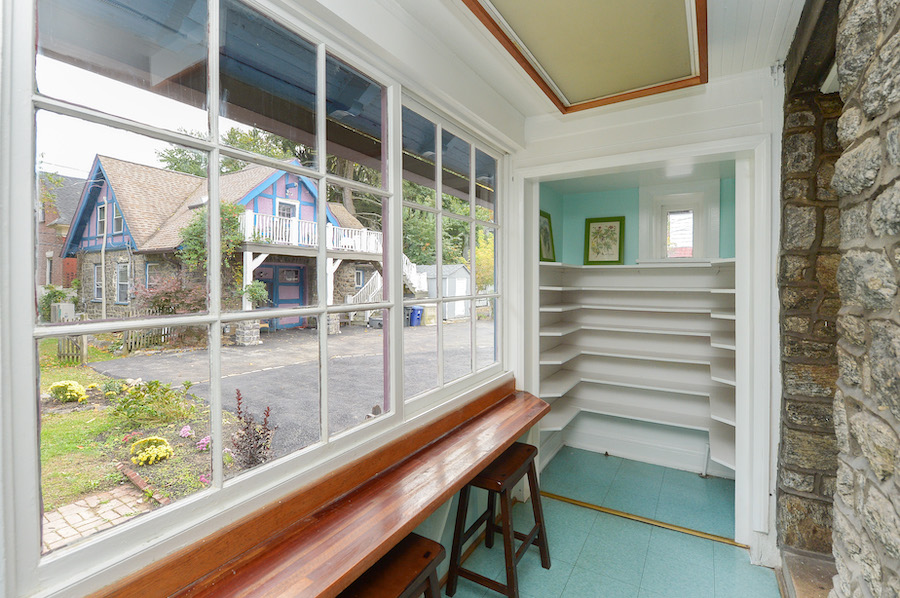 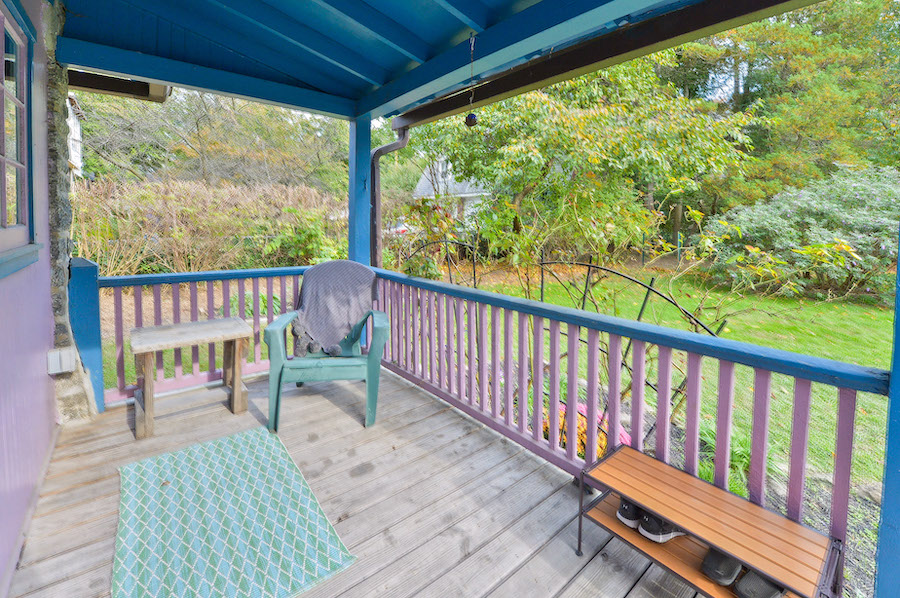 And in back of it, an enclosed sunroom leading to the back porch and yard contains pantry space and could hold those additional fridges. 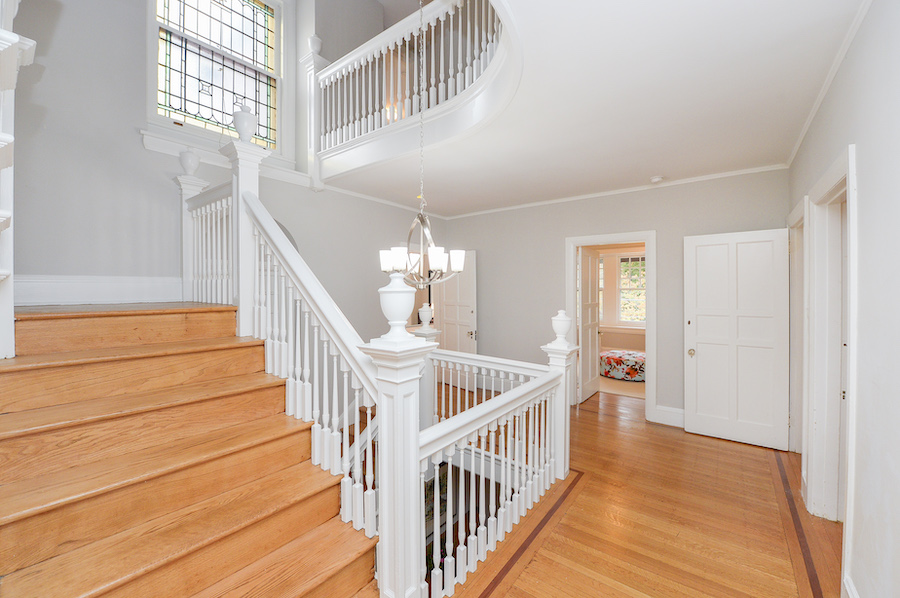 Five of the 10 bedrooms are on the second floor, whose hallway gets lots of natural light from a large stained-glass window that’s fully operational. 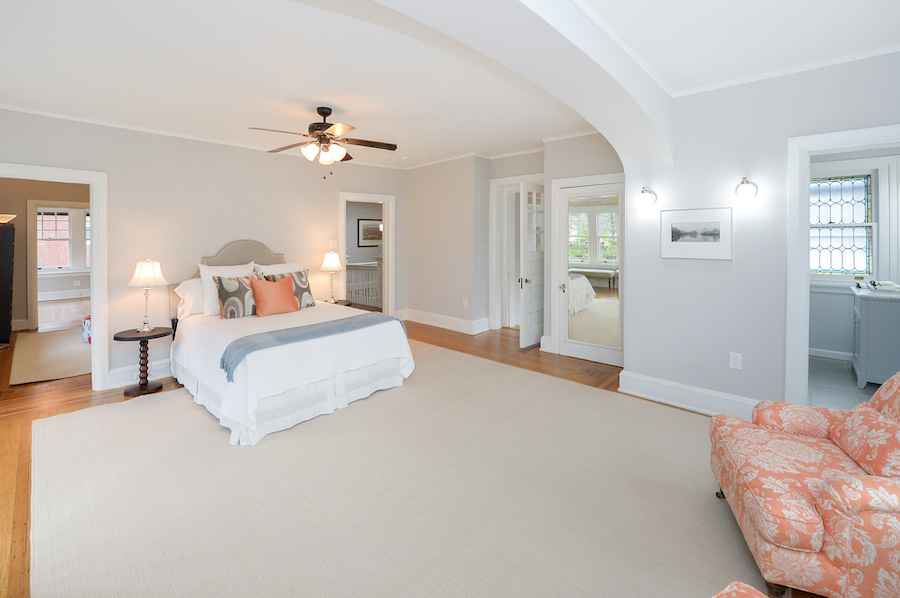 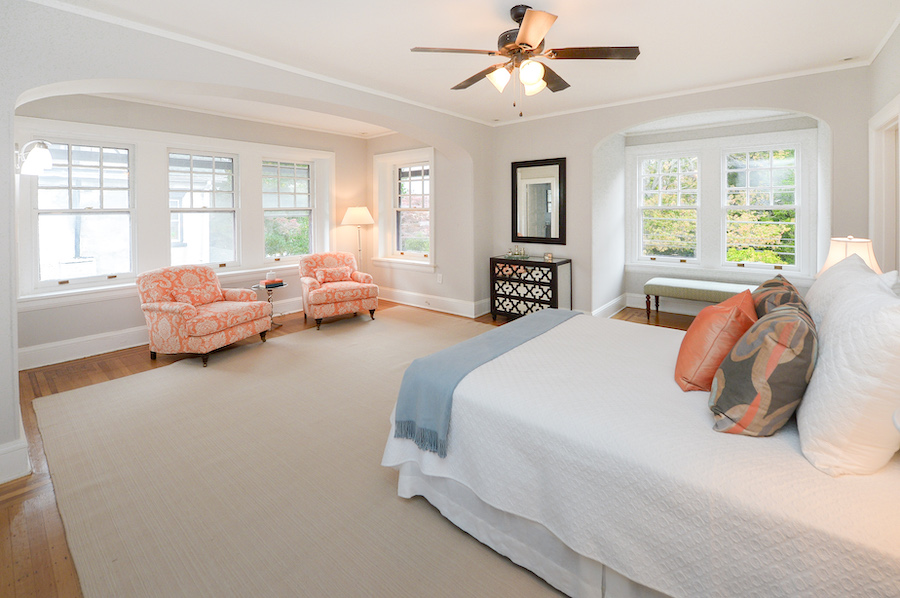 Three of the bedrooms are connected to one another. The primary bedroom has its own sitting area. 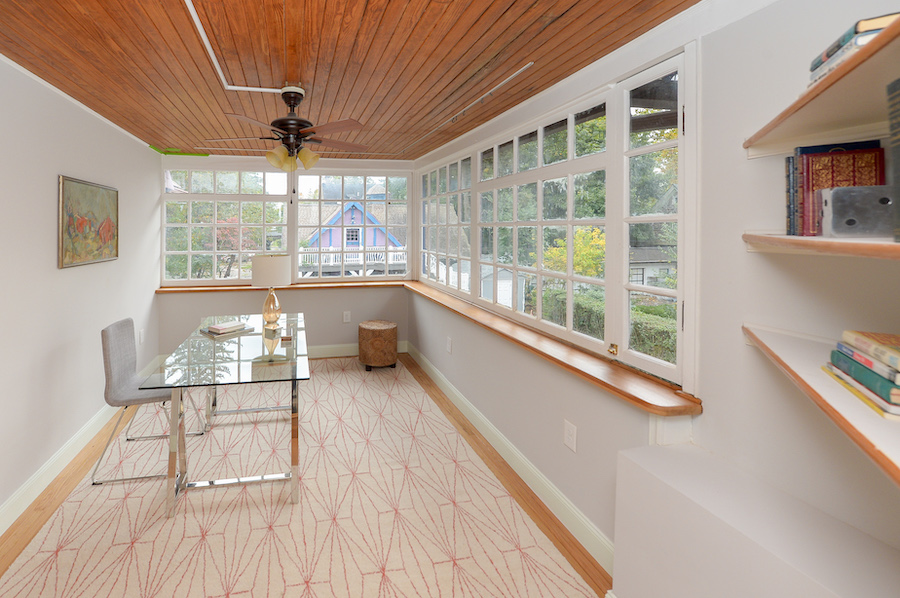 It also has a sun porch that can serve as a home office. 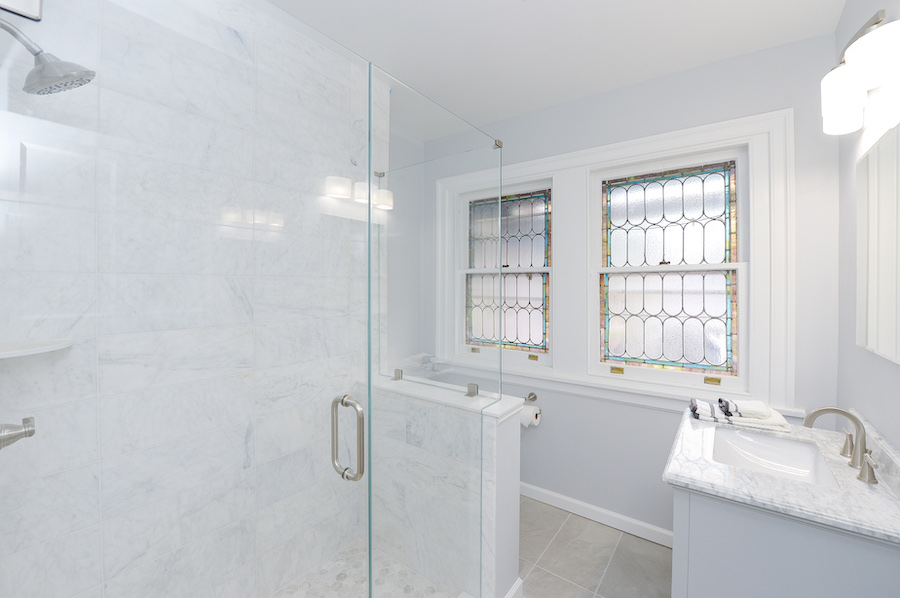 And its en-suite bathroom is brand-new. 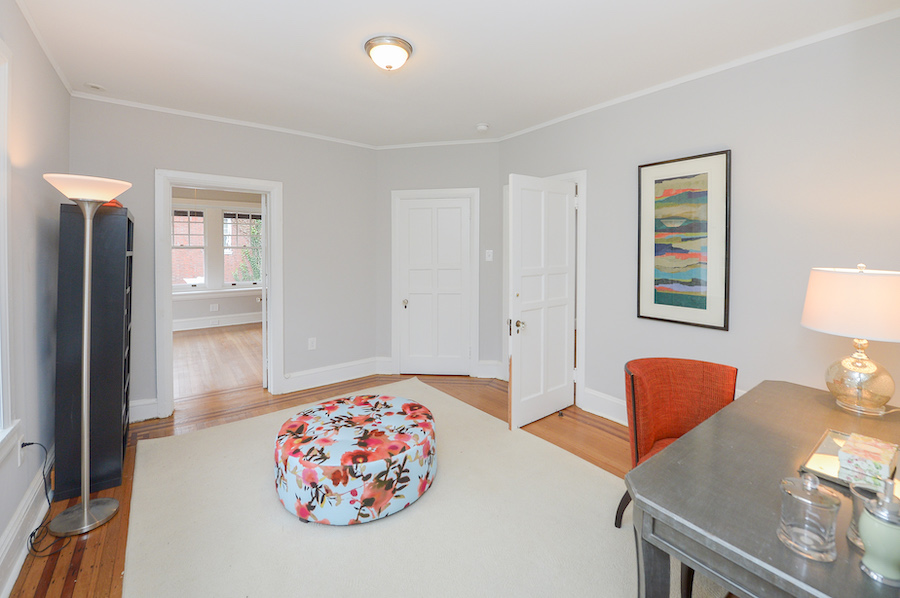 The bedroom next to it is currently outfitted as a study, and the one beyond it has a closet with mirrored doors. 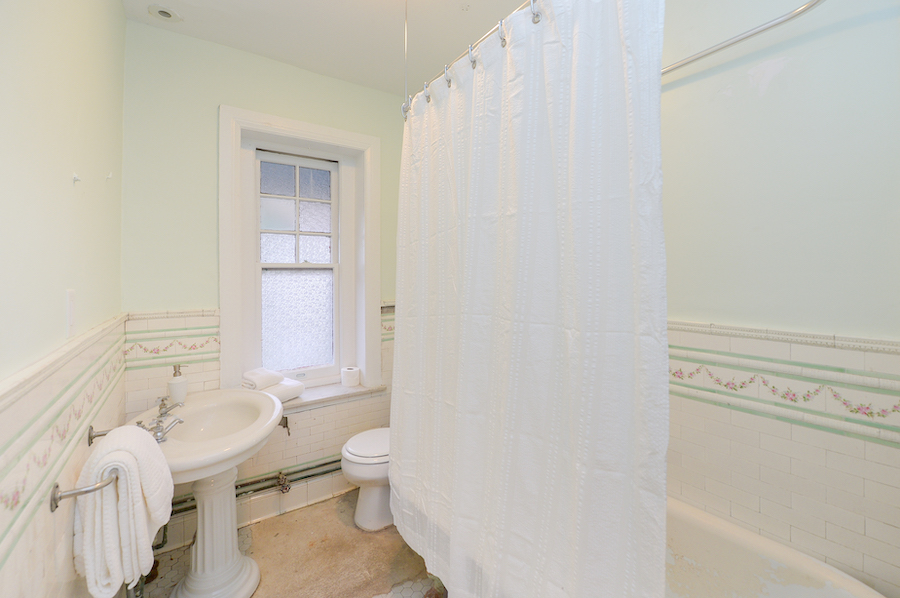 The hall bath next to this bedroom has its original tilework, clawfoot tub and built-in medicine cabinet. A second hall bath serves the two connected bedrooms at the rear of the second floor. The original service stairs leading from this floor to the kitchen remain in place but no longer connect to the kitchen.

Five more bedrooms and a bathroom installed in the 1970s comprise the third floor, and a hatch in the third-floor ceiling leads to an attic with storage space along with two of this house’s three climate-control systems, one of them high-velocity.

The third system sits in the unfinished basement, where you will also find the laundry facilities. The house is also equipped with a boiler and a 75-gallon water heater.

Listed on the city and national historic registers, this house is a living link to Overbrook Farms’ swanky origins. The neighborhood retains its cachet, but it has changed over the years; for instance, the lot immediately west of this house once contained a house that may have been as large as this one but now has two 1950s ranch houses sitting on it.

For some years, Ames rented this house to members of her faith community while living on the other side of City Line Avenue. Now, however, she has restored it to its original configuration and brought its appearance back up to snuff for one fortunate family to occupy.

And if you buy this Overbrook Farms Queen Anne house for sale, you will get to know her better, for she will be your next-door neighbor: She and her husband live in the carriage house behind it, which has been split off into its own lot and driveway.

OTHER STUFF:  The sale price of the house alone has been reduced twice, most recently by $25,000 on November 9th.