Unlike the last house this developer built, every inch of it was brand-new when he built it in 2017. But it’s hard to tell that from the outside. 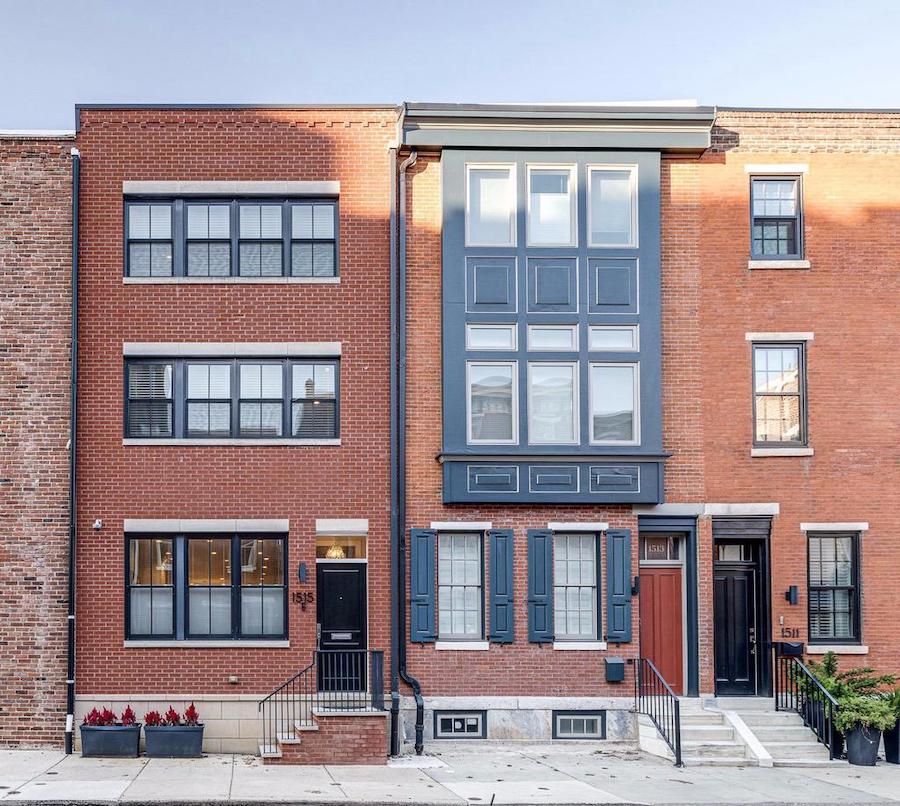 As you can see from the photo above, the new townhouse Scott Paymer built for his family from the ground up in 2017 blends in beautifully with its traditional neighbors. Which one is it? Read on for the answer, but you may be able to pick up some clues from looking at the facades in the photo. One huge one is its address: 1515 Lombard St., Philadelphia, PA 19146 | Bright MLS images via Black Label Keller Williams Luxury

Some of you who regularly follow this department may recall a brand-new Rittenhouse Square townhouse featured here when it went on the market in early 2020. That house, which I dubbed “the Best Facadectomy of 2019,” had been built with the intent that the developer who built it would make it his home.

But before he began work on it, Scott Paymer had a change of heart. Instead of moving into that house, he bought another lot in 2015, tore down the house that stood on it, and built a new one for his family.

I’ll bet you can’t tell which of the houses in the photo above is the one he built. And that’s because he gets the traditional Philly rowhouse vernacular right.

So, contrary to real estate photography tradition, the nearly new Rittenhouse Square townhouse for sale that Paymer built is the one on the left in the photo above. (And on the right is the house we featured back in 2019.)

Doesn’t it play real nice with its neighbors? And it’s every bit as nice on the inside. 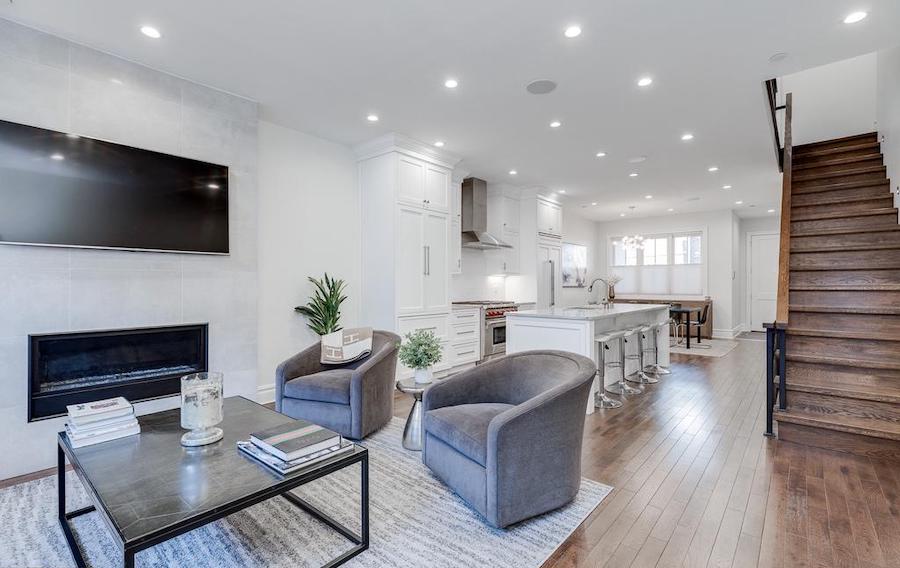 But even though it does take many design cues from its traditional facade, its interior is much more modern, starting with its open-plan main floor (which you enter through a traditional vestibule, a feature often omitted from modern townhouses). 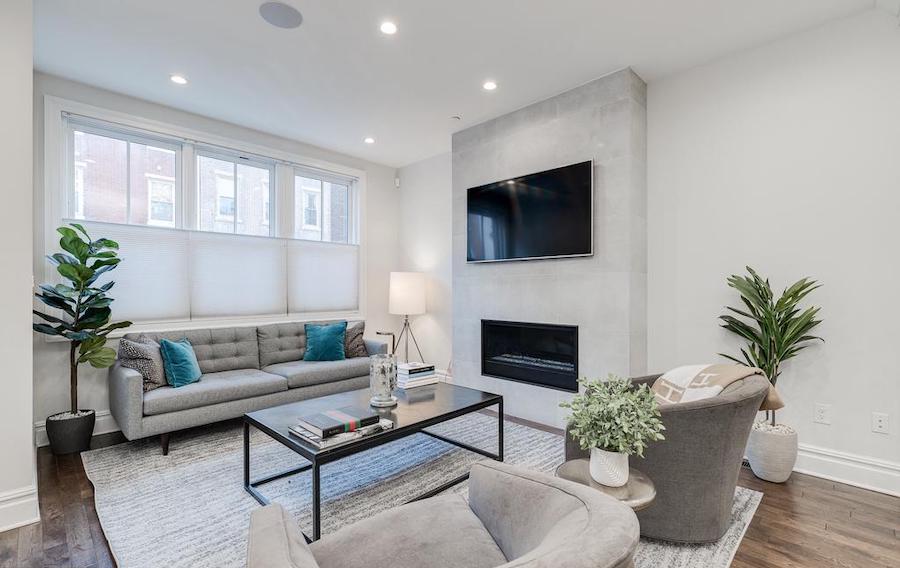 For starters, take the full-height gas fireplace in the living room, clad in Porcelanosa tile. 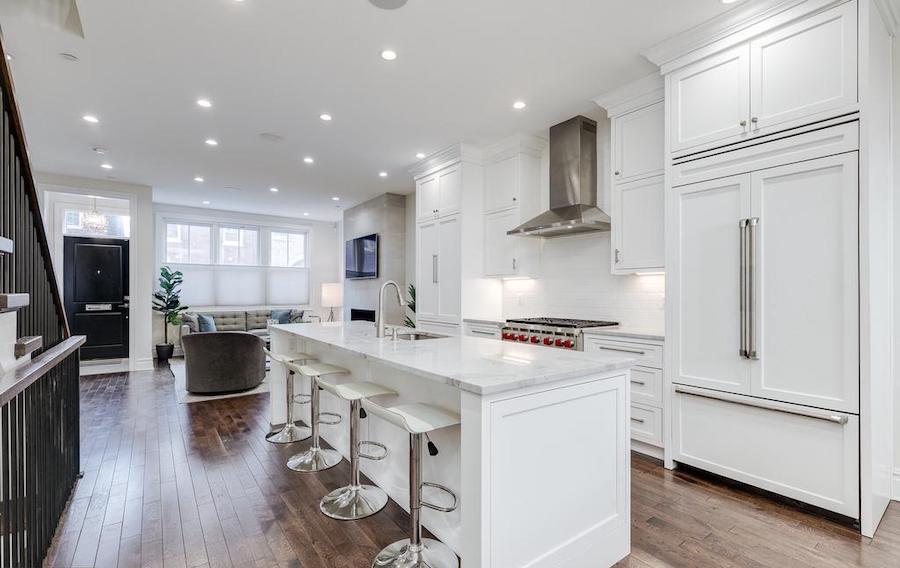 Then proceed to the kitchen. Even though the cabinets have crown moldings, they are ur-modernist Shaker in style, with contemporary pulls. The listing copy describes its Jenn-Air refrigerator and dishwasher as “panel-ready,” but from the looks of the fridge in this photo, Paymer already took care of the panels for you. 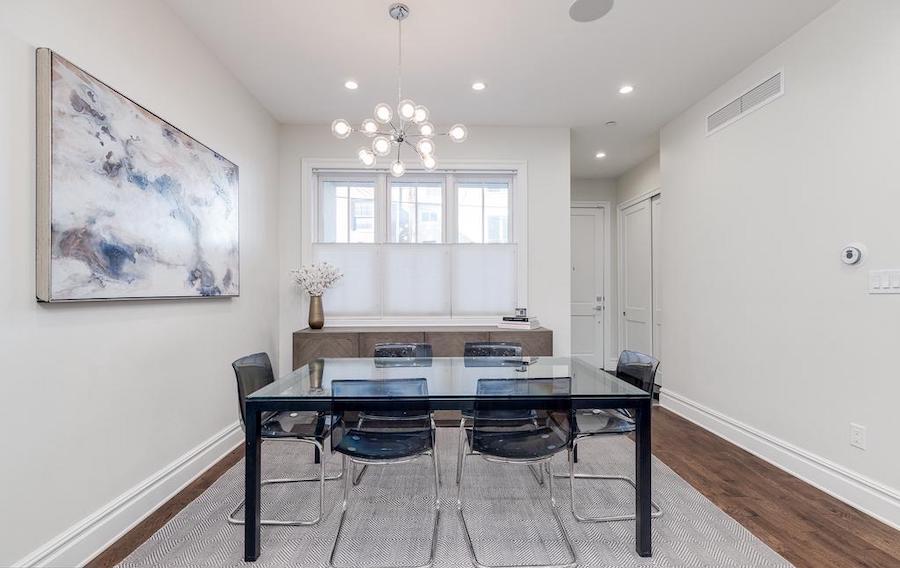 The dining room behind the kitchen also adds some traditional trim — the baseboards and window frame — to a modernist space. A powder room sits off the stairs to the basement next to the dining room, and the back door beyond the dining room leads to a gated parking pad that can accommodate two cars, maybe more.

Two bedrooms, a hall bath and the laundry comprise the second floor. And the primary bedroom suite, a guest bedroom and another hall bath comprise the third. 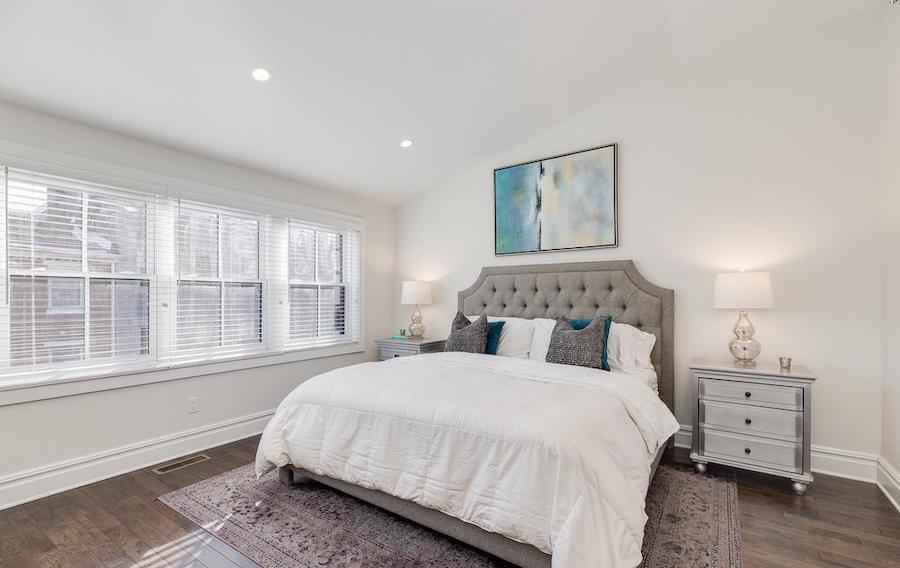 The bedroom has a ceiling that rises to 12 feet high. 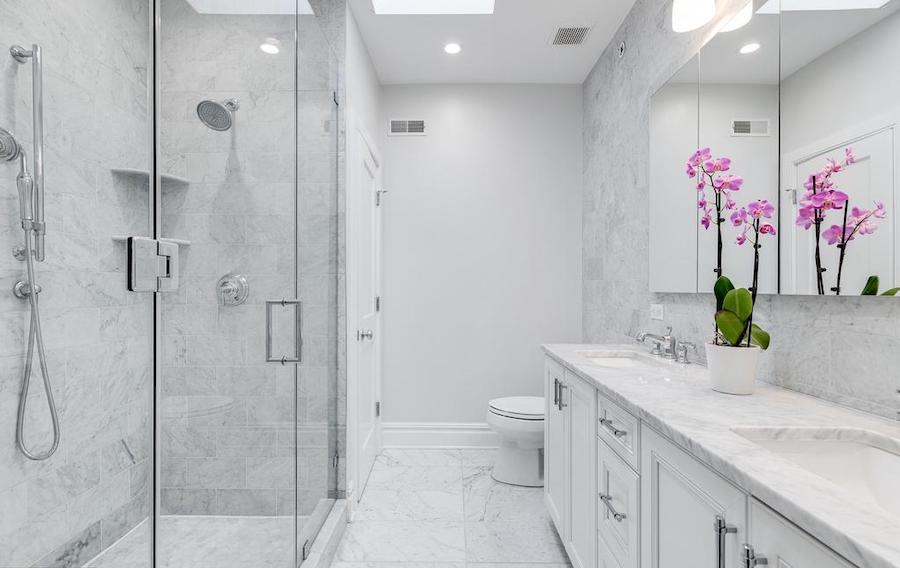 And its skylit bathroom boasts loads of Carrara marble, both topping its dual vanities and in the form of tile climbing its walls from its floor to its ceiling and surrounding its glass-enclosed shower. 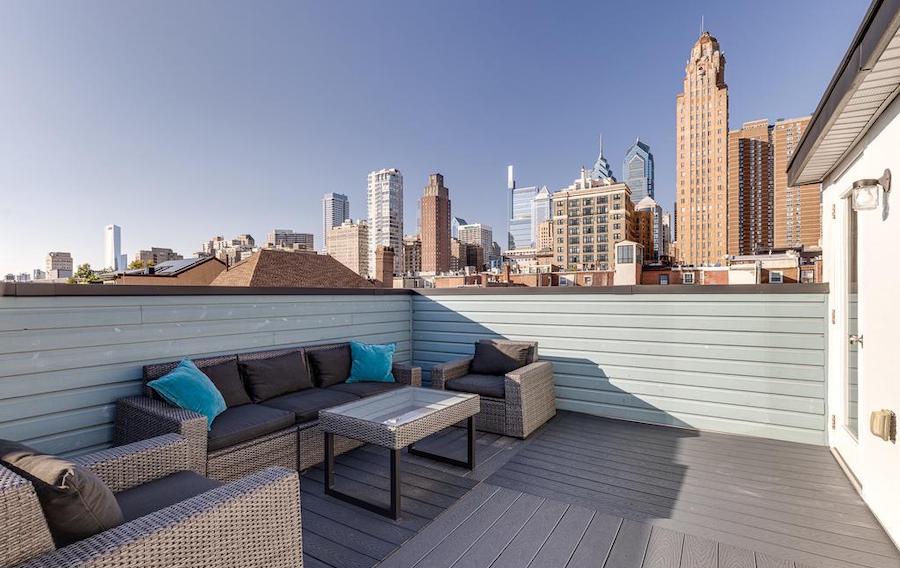 Topping all this stylishness off is a roof deck with great views. 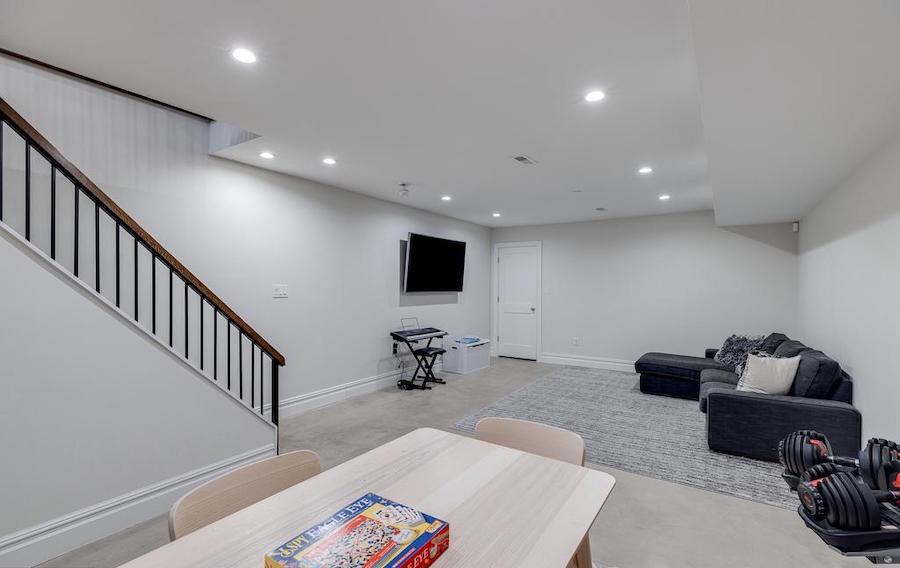 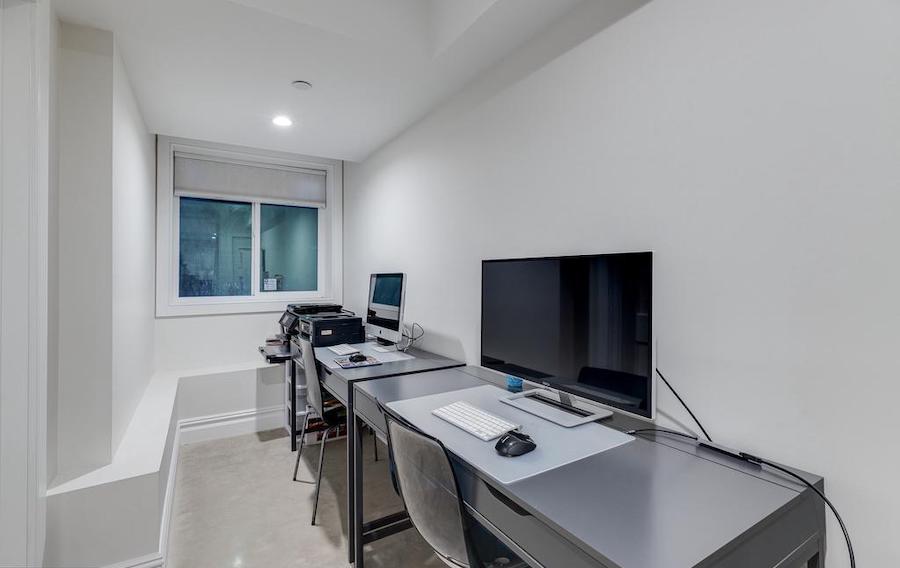 And underneath it all, a finished basement with polished concrete floors can serve as a home office, media room, home gym or some combination of all three.

Finally, not only is this nearly new Rittenhouse Square townhouse for sale nicely outfitted, but it’s also nicely situated — just a block and a few steps from the Avenue of the Arts and one block from the lively South Street West dining scene, not to mention Bob & Barbara’s Lounge. You should be able to keep your car parked much of the time as well, since there are both so many great things within walking distance and three SEPTA transit routes (including the Broad Street Line) to take you to points further away.

And given that it’s only five years old, it also comes with one other nice feature. Read on.

OTHER STUFF: Five years remain on its property tax abatement. Its sale price was reduced by $45,000 when it was relisted on October 14th.