Here They Come: Why the New Sixers Arena Could Be a Huge Win for the Team and the City

The proposed “76 Place” would be the right facility in the right location — and the right people would be building and paying for it. 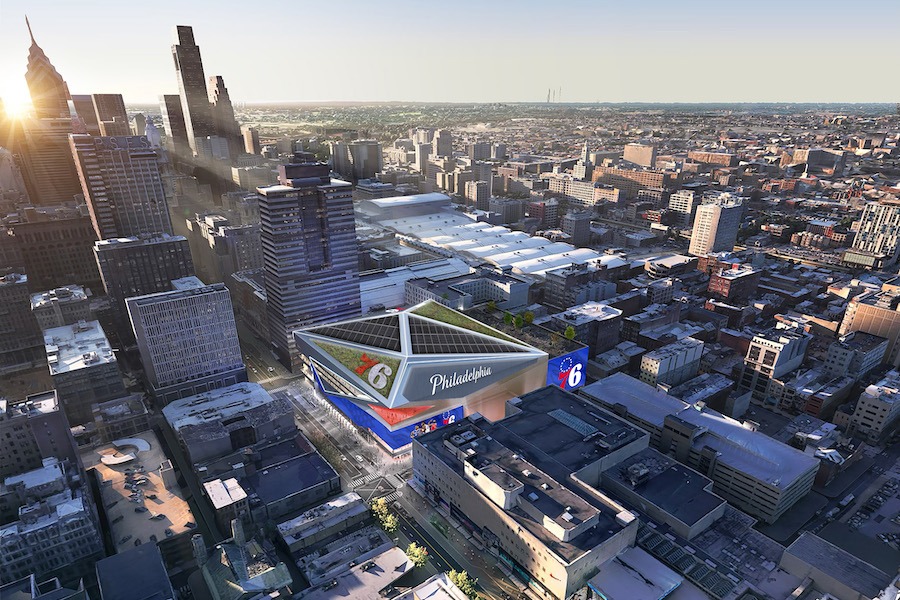 Rendering of the proposed Sixers arena, 76 Place at Market East / Images via 76 Devcorp

Note: This story has been updated to note opposition to this proposed project from members of the Chinatown community.

This morning, the Sixers took the wraps off their vision for a new sports arena they own and can control.

And with their 76 Place at Market East proposal, they have come up with a win-win winner.

The first win is for Market East itself. The public and private investment that has gone into what was once the city’s biggest shopping center has failed to restore its former glory, and the recent makeover of the Gallery mall into Fashion District Philadelphia hasn’t quite lived up to its advance billing, either. This totally private endeavor brings with it the possibility of more people coming to both Market East and the Fashion District — and since the Sixers are paying for the experiment, we will be able to see just how much more coin arena patrons drop in surrounding businesses (if any).

The second win is for the fans coming to those events.  The Sixers pointed to New York’s Madison Square Garden as an example of what they want to emulate with this arena. That arena sits right atop the nation’s busiest passenger train station along with two major subway lines. This one will likewise sit directly atop a central regional rail station and a stop on the city’s busiest subway line.

Two other similarly sited arenas — Boston’s TD Garden and Washington’s Capital One Arena — do not cause massive traffic tie-ups on event days because so many of the patrons use public transit to get to them. Even more patrons should use transit to get to this arena because it will have direct, all-weather indoor connections to nine rail-transit stations, including one on the PATCO Lindenwold Line. That will give this facility something no other sports or concert venue in this area has: A single-seat ride from just about any point in the region, the transit planner’s Holy Grail.

(Of course, this assumes riders will take the trains to the games. The direct connections should lead more of them to choose to ride rather than drive to 76 Place than to the Sports Complex in South Philadelphia, but SEPTA will need to up both its operations and its marketing games to maximize that number.)

Three of those nine stations will require fans to pass through the Fashion District mall, which will also benefit from this project. The former Gallery II mall, which this arena will replace, never worked right because of a flawed design from the start. The Fashion District makeover compensated for those flaws with its placement of entertainment hotspots on its top level; that ensured that more people would be willing to take the escalators up to that level. But Round 1 and the AMC theaters put together won’t bring as many people to the mall as this arena would. 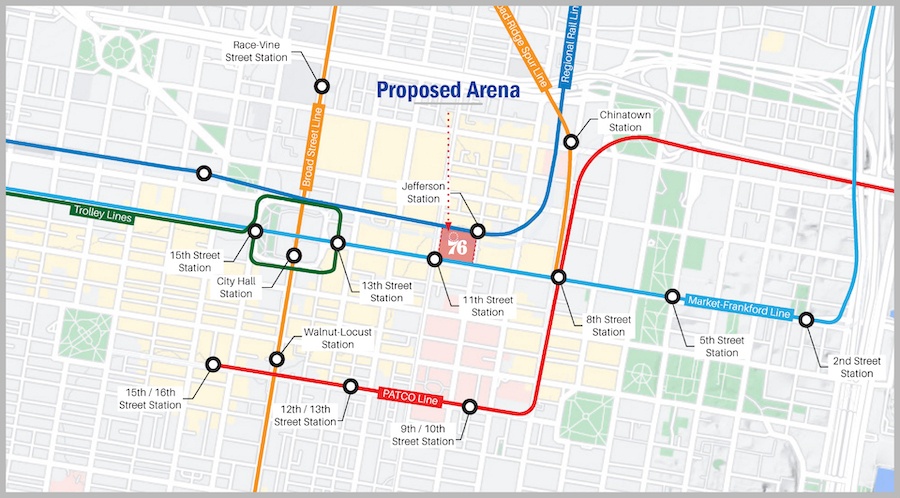 Not to mention that, with a little thoughtful interior planning, the arena could function as an extension of the mall still. Fan amenities like apparel shops, bars and restaurants could remain open when the arena is not hosting events to serve mall visitors, for instance. Likewise, some of the arena concourses could contain retail stores that would serve mall patrons as well as event fans.

Even the new Sixers arena’s Chinatown neighbors could benefit from it. At least its many restaurant and bar owners should. And as the transit lines will siphon off much of the other traffic, it shouldn’t place a severe burden on the neighborhood’s narrow streets the way the proposed Phillies ballpark might have. Nor will it choke off Chinatown’s room to grow, since it replaces an existing barrier rather than adds a new one.

However, a coalition of Chinatown community members and organizations announced today that it is forming to resist this proposal. The coalition says it hasn’t been contact by the 76ers despite the large impact the project would have on the community. In a press release, Steven Zhu, the president of the Chinese Restaurant Association, cited the negative impact DC’s NBA arena had on that city’s Chinatown, adding “we know that these big sports arenas do not contribute to the neighborhoods that they are in; they serve only their own needs and their own profits.” These concerns are significant and will need to be addressed.

In other aspects, at least, the Sixers seem to be signaling a desire to make the communities around the arena partners in its success. The development team includes Mosaic Development Partners, one of the city’s most successful and creative social-impact development firms, led by two Black entrepreneurs. And the Sixers say they intend to draft community benefit agreements with its neighbors.

Finally, this proposal is a win for City Hall and Harrisburg, as the Sixers will ask neither for one red cent of support for it. They are spending their own money to build it, which is what any sports team owner should do.

Indoor arenas get more — and more intensive — use than football stadiums or even ballparks, and 76 Place would certainly have a year-round schedule of events and activities. Even cities with weaker mass transit networks have found that downtown sports arenas deliver significant benefits — look at Los Angeles, Dallas, Houston or even Kansas City, whose downtown arena doesn’t house a major-league sports team. Since it would bring so many people into Center City, and it wouldn’t cost us anything unless we buy event tickets, this very well-thought-out proposal deserves our support.