This early example of a mansard-roofed American house dates to the dawn of the 19th century but has been expanded and upgraded since then. 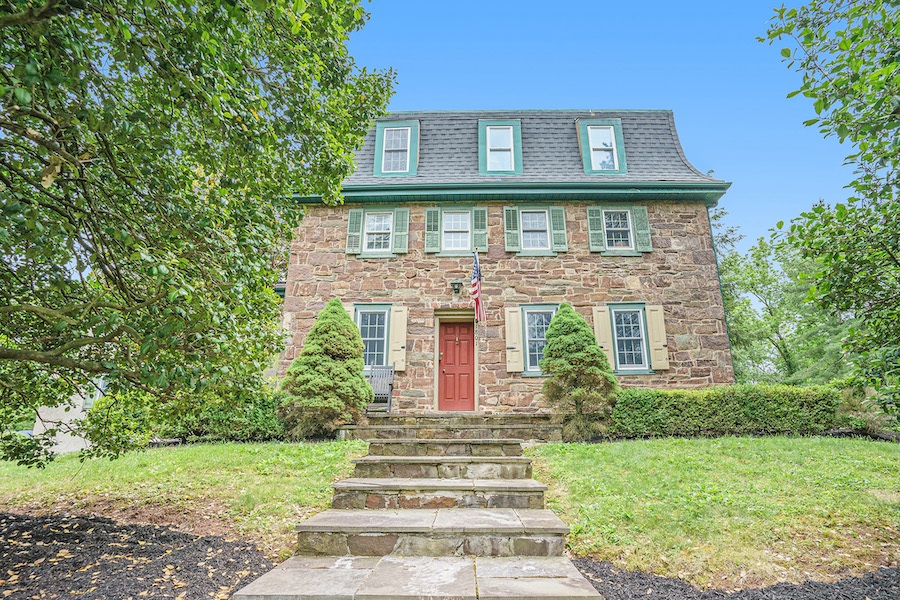 You’d probably call this handsome house dating to the dawn of the 19th century at 1801 Old Forty Foot Rd., Harleysville, PA 19438 a Colonial — the iisting agent does, and the original house does have the thick fieldstone walls associated with the style. But that mansard roof on top makes it something different — and just a little more French. | Photos: Sarah Rucinski, Next Door Photos, via EveryHome Realtors

The mansard roof — invented in France in the 17th century and widely adopted there in the 18th century to skirt height restrictions in Paris — is commonly associated in this country with the architectural style known as “Second Empire.” Philadelphia City Hall, we should all know, is the grandest example of this architectural style in existence in America.

Because this style was also widely used in houses built in the latter half of the 19th century, such houses are also often referred to as “Victorian” in keeping with the former British practice of labeling house styles after the current reigning monarch.

I almost made both mistakes in attempting to characterize this Harleysville French-style farmhouse for sale.

Why would it be a mistake to use those terms in reference to this handsome house?  Because the original section, the front of which you see above, dates to 1802. Queen Victoria would not assume the British throne until 35 years later, and Napoleon III would not declare the Second French Empire until 50 years after this house was built.

However, its early-19th-century provenance quite likely makes it one of the earlier examples of French-influenced domestic architecture in the country. 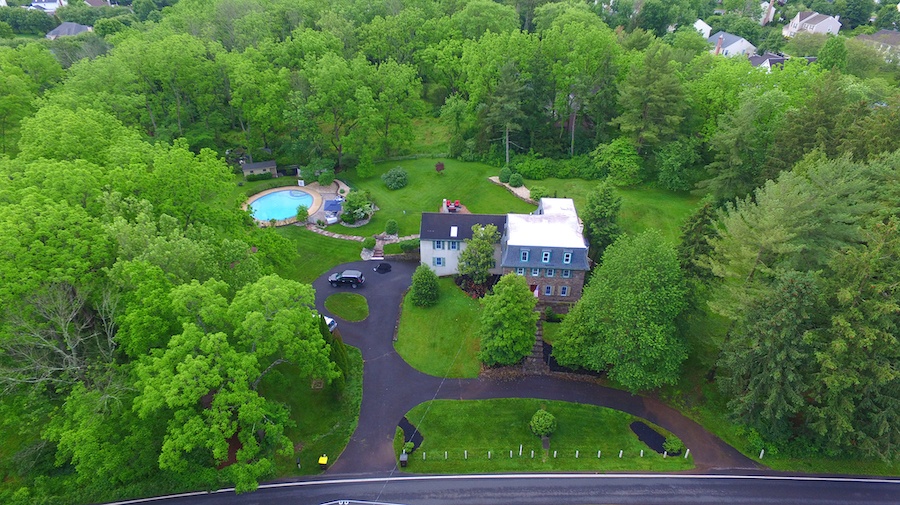 But half of this house isn’t French at all. As you can see from the above aerial view of its 2.2-acre site, the L-shaped original house had a more tradtionally American Colonial wing tacked onto its back some time later.

Inside, you can tell which part of the house you’re in by the depth of the windowsills. The original house has 20-inch-deep ones, characteristic of Colonial and early American construction. 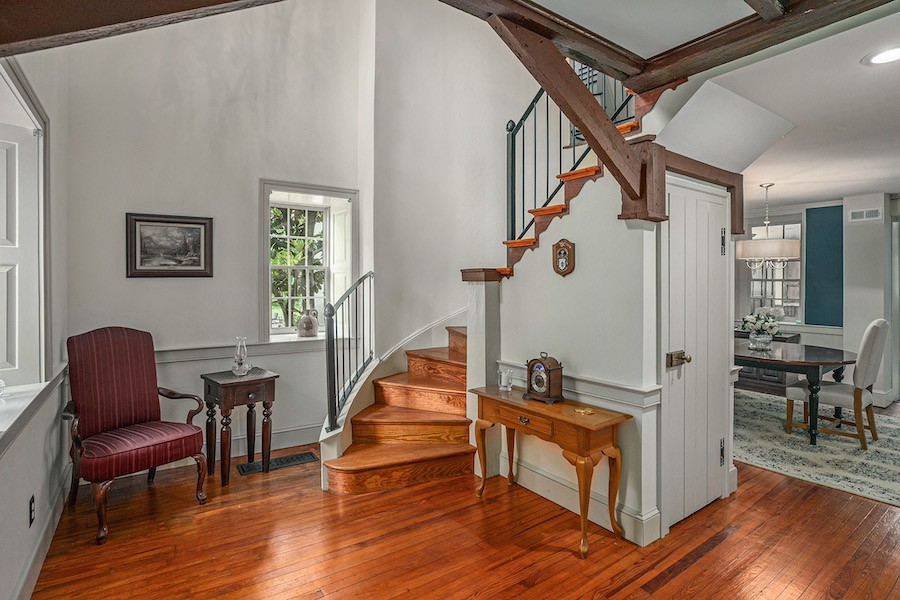 That includes the windows in the two-story-high foyer, the product of an even later renovation of this house. Included in that renovation is the curved main staircase that leads to the bedrooms on the upper two floors. 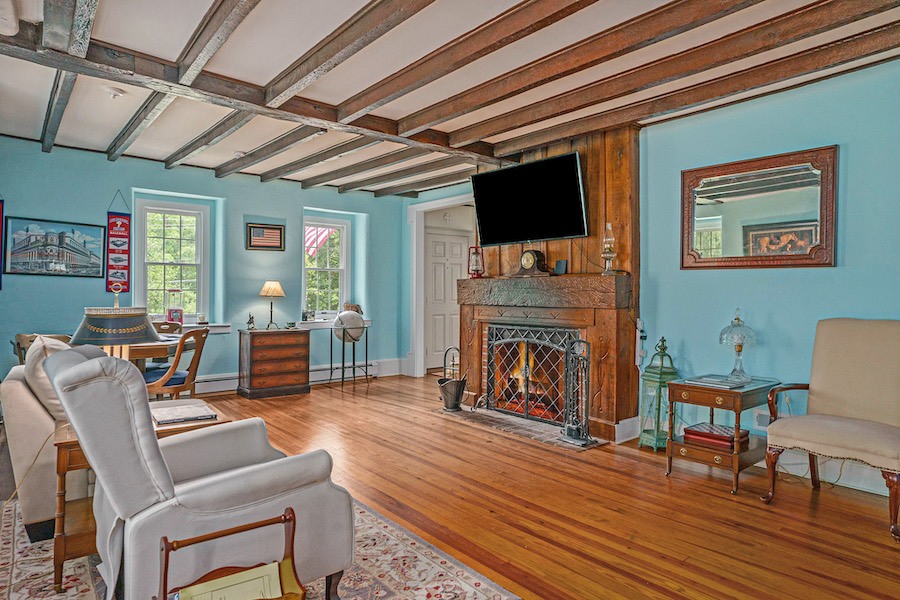 Immediately to the right of the foyer, the living room features a beamed ceiling and a wood-burning, full-height fireplace made of carved wood with a thick wood-beam mantel. 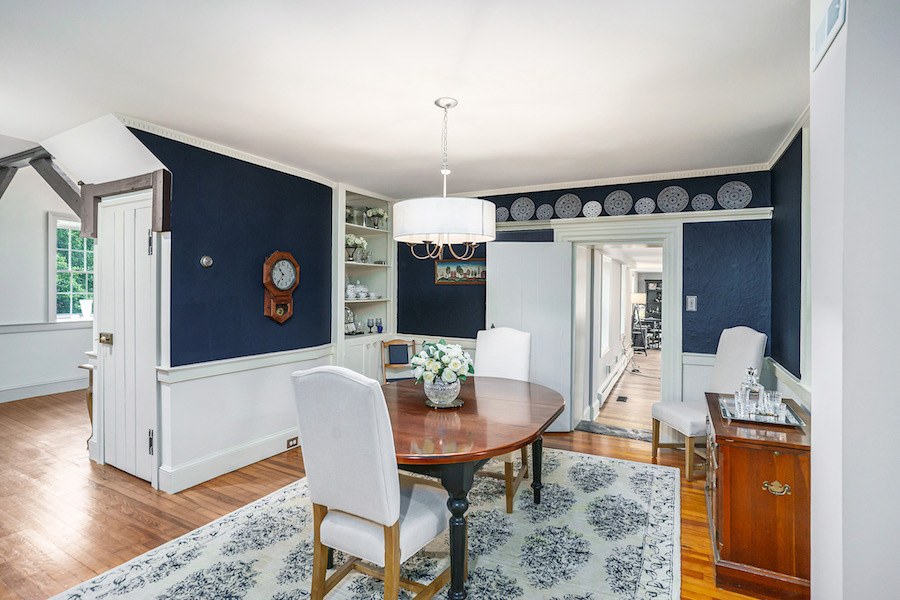 Immediately past the foyer, the formal dining room’s fireplace has been covered, but its mantel survives. A chair rail divides the upper and lower parts of its two-tone walls, and it has a built-in china display cabinet and a display rail near the ceiling over the doorway to the kitchen. 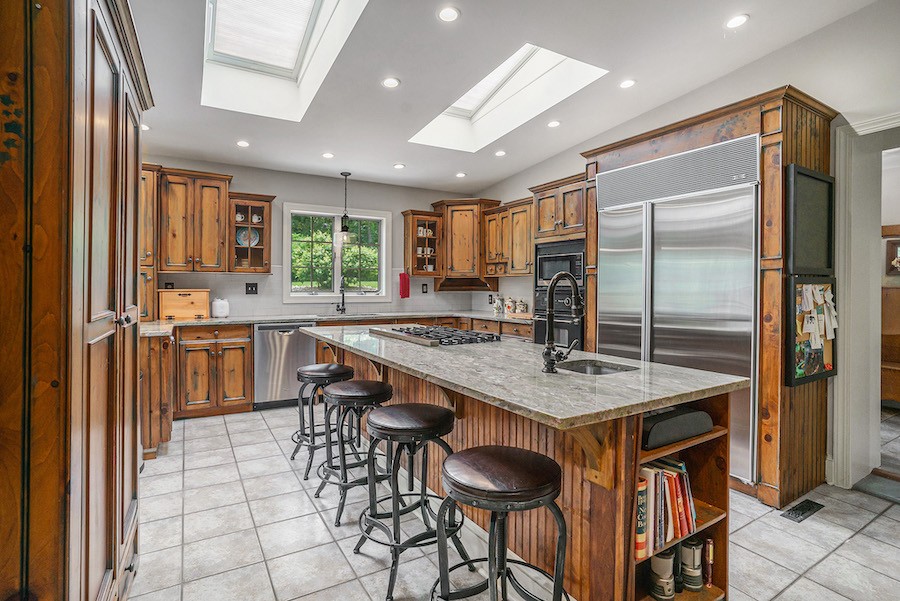 The kitchen and attached breakfast room share an ell in back of the addition. The kitchen has an Electrolux professional-grade gas range in its island, a Sub-Zero refrigerator-freezer, a second wall oven and a built-in microwave. It also has bar seating for four at its island and two sinks to make food prep and cleanup easier. 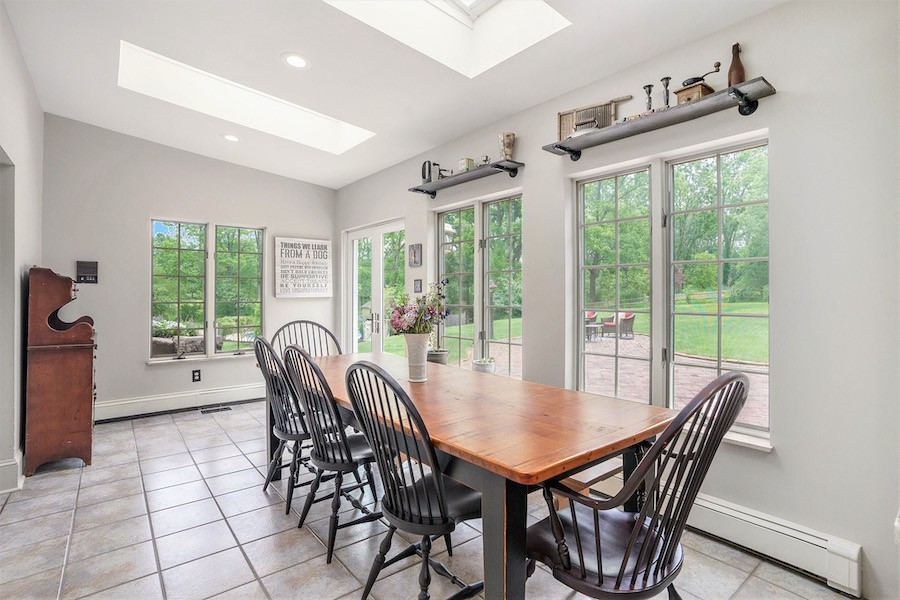 Both the kitchen and breakfast room are lit by skylights with programmable Hunter Douglas shades. 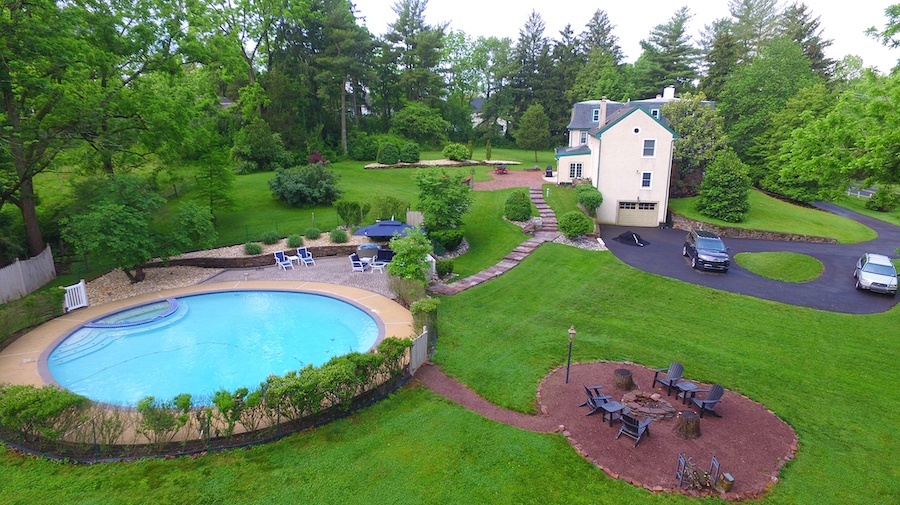 A doorway leads from the kitchen to a hallway that leads to the back door past a laundry and a full bathroom. That door and the French doors in the breakfast room lead to an expansive backyard with a patio, pool and two fire pits. 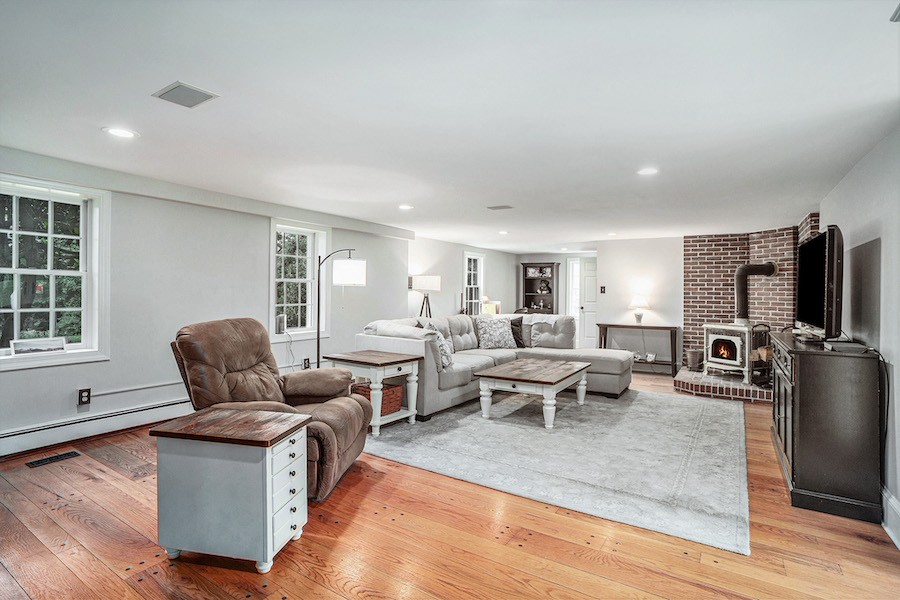 And one off the breakfast room leads to a spacious family room on the first floor of the addition. A wood stove helps keep it warm on those chilly nights. 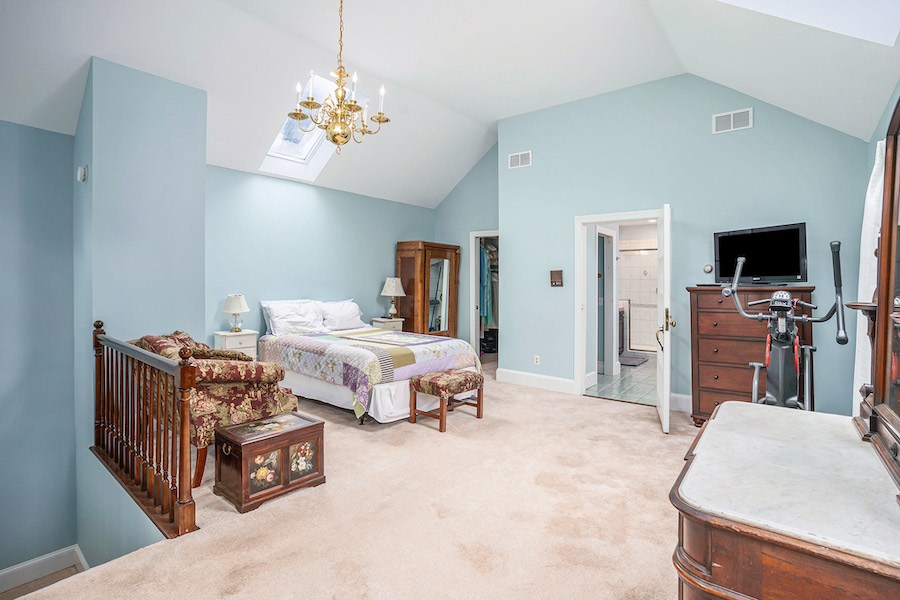 Stairs from this room lead up to a second-floor guest suite whose bedroom has a skylit vaulted ceiling. 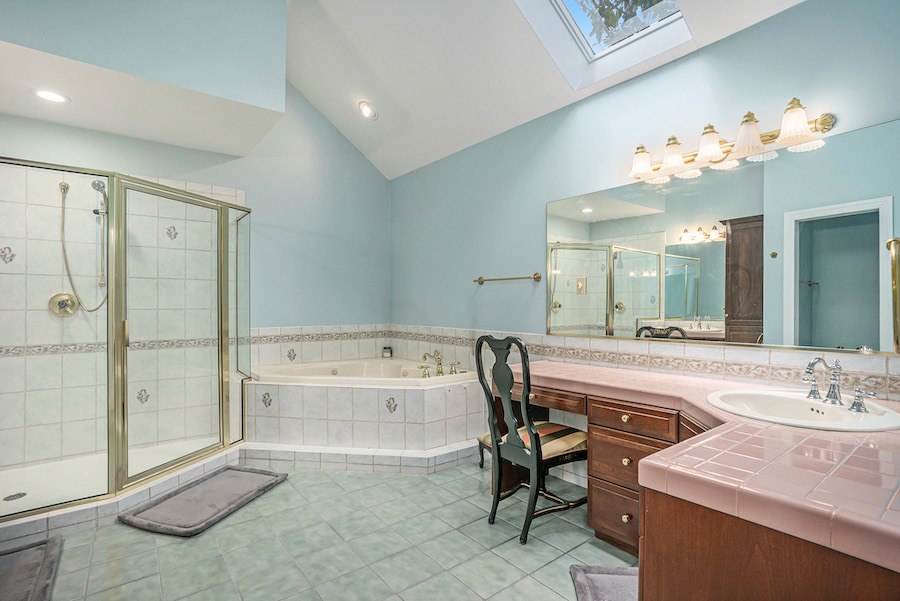 It also has a spacious bathroom that contains a dual vanity, shower stall and soaking tub. 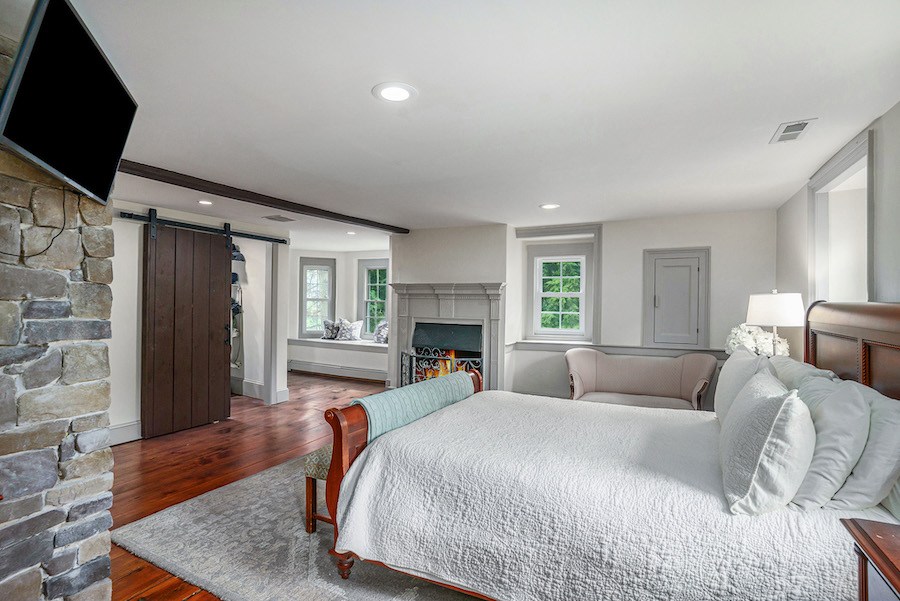 The primary bedroom suite takes up the entire second floor of the original house. Its bedroom also has a wood-burning fireplace. 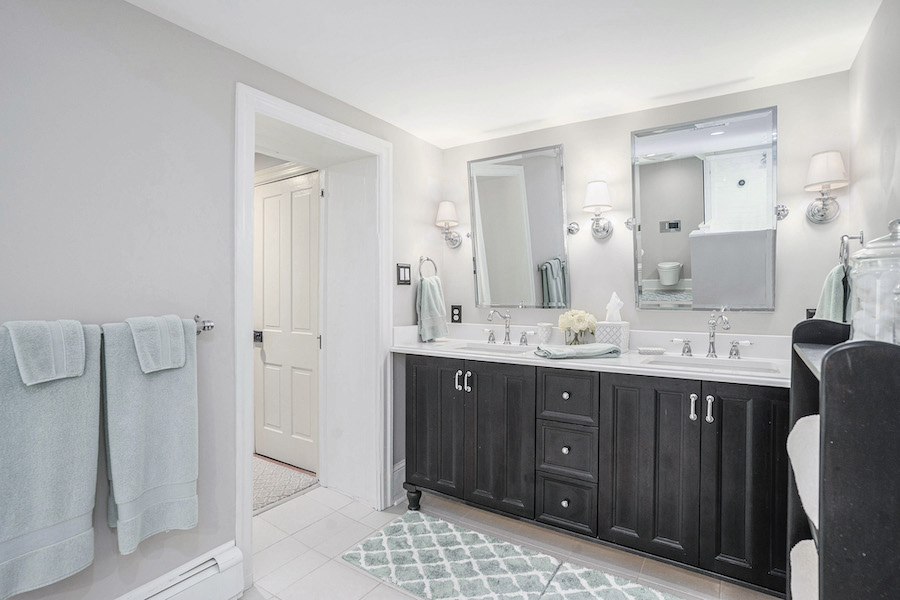 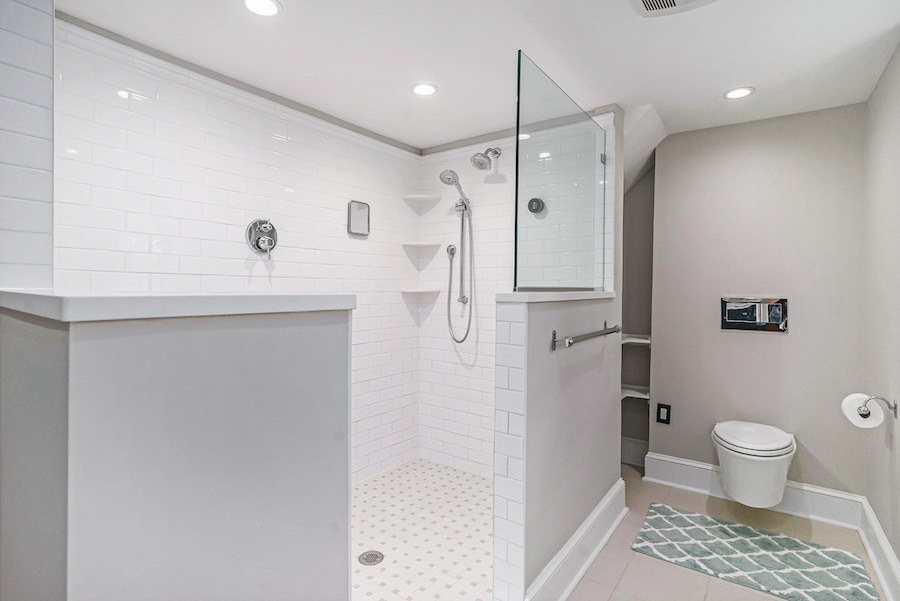 Its bathroom lacks a soaking tub but has dual vanities and a more luxurious shower. It’s also connected to a large closet and dressing room. A staircase next to the dressing room leads to the first floor.

Three more bedrooms, one with an attached sitting room that could function as a home office or playroom, and a hall bath fill the space under the third floor’s mansard roof.

Even though it’s lined with houses on similarly large lots, Old Forty Foot Road still has that in-the-country look about it. But looks can be deceiving, for this house is actually convenient to a good chunk of civilization. Just to your north — a right turn out of your driveway — the road ends at Sumneytown Pike, which is also Route 63.

A right turn and a very short drive put you at the Lansdale interchange of the Pennsylvania Turnpike Northeast Extension, and a short drive further puts you in Lansdale itself, where you will find boutique shopping, great dining, a craft brewery and a music venue as well as SEPTA Regional Rail service into the city.

Turn left, towards Skippack, and just shy of the town, the road crosses Skippack Creek. At this point you will be in the upper reaches of Evansburg State Park, where you will find fields, meadows and woods, all laced with hiking trails. The park also has plenty of active recreational facilities and picnic areas.

Of course, none of this existed in 1802. But today, all of it is at your disposal, and when you’re done, you have this attractive, historic and comfortable Harleysville French-style farmhouse for sale to come home to.