You now have the opportunity to literally get in on the ground floor of an attractive five-unit condo development in a most convenient neighborhood. 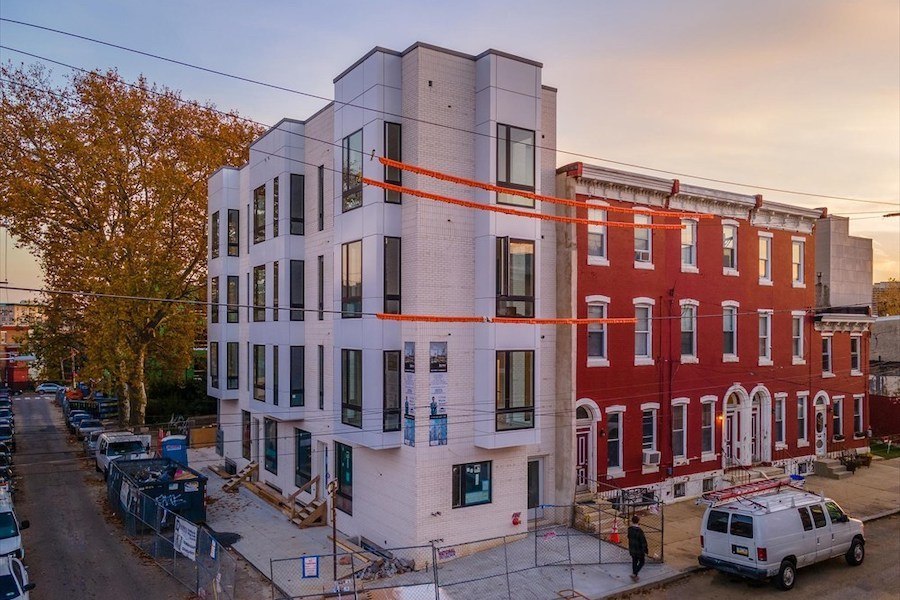 PB+DC Construction was putting the finishing touches on The Wylie when this photo was taken a few weeks ago, but three of its five units had already been sold. This one, at 1754 Wylie St., Unit 1, Philadelphia, PA 19130, is still available, and it’s a vision in white. | Bright MLS images via Keller Williams Philly

If you’ve been paying attention to development news and announcements — and I must confess that I haven’t been paying as much attention to this as I should of late — there’s a developer out there who’s been building new projects at a furious pace hereabouts.

That developer is Stamm Development Group, a six-year-old firm that has notched 68 projects containing 880 housing units on its tool belt since its launch. As I write this, it has at least 10 projects from small to large in various stages of construction all over the city. All of them have a residential component, and most of them are pure residential plays.

Such as The Wylie, the five-unit condominium at Wylie and Perkiomen streets that contains this Francisville new construction bi-level condo for sale. Designed by M Architects, which has also produced at least one other project Stamm is building, this rhythmic modern condo stands out from its neighbors.

How could it not? It’s not only frankly modern, it’s taller than those neighbors. At least this bi-level condo puts you on their level, as it’s one of two units that split the ground floor and basement between them. 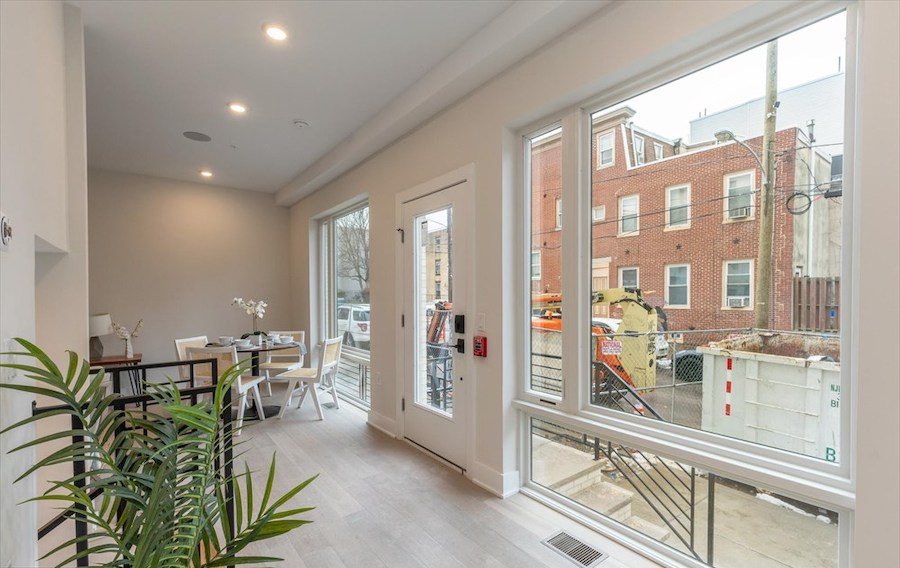 You enter this condo directly from Perkiomen Street via a door with a window almost as large as those that flank it. 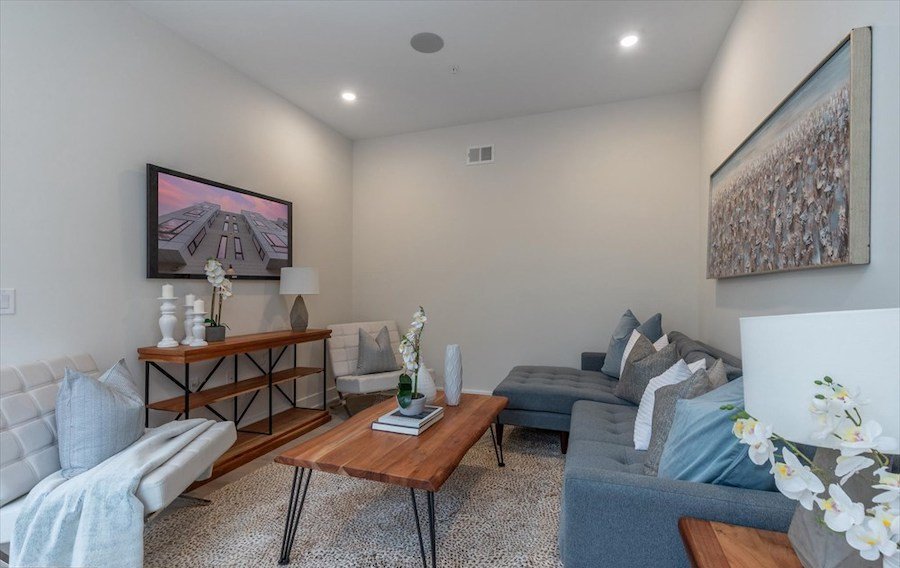 The window to the right of the door floods the living and dining areas with plenty of natural light from the north and east. 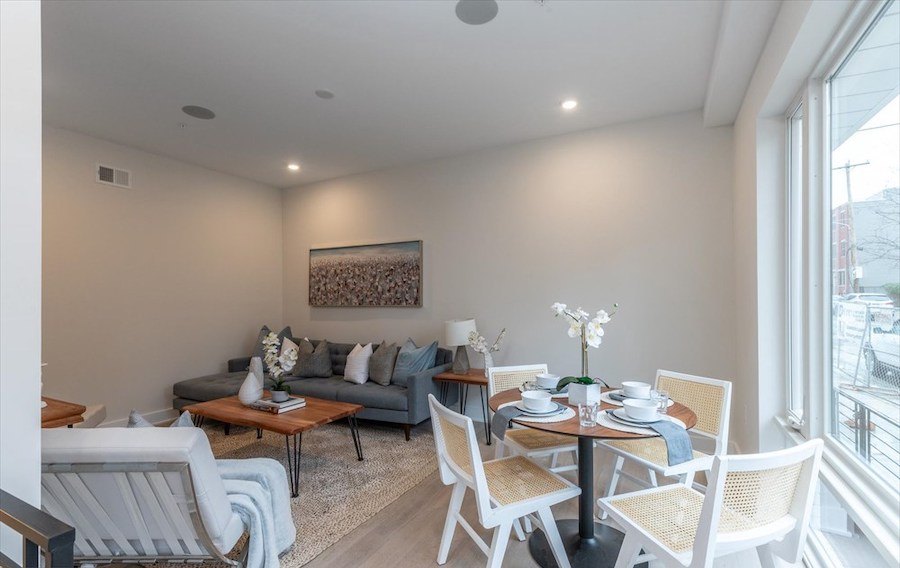 The other window faces the stairs to the bedrooms down below. 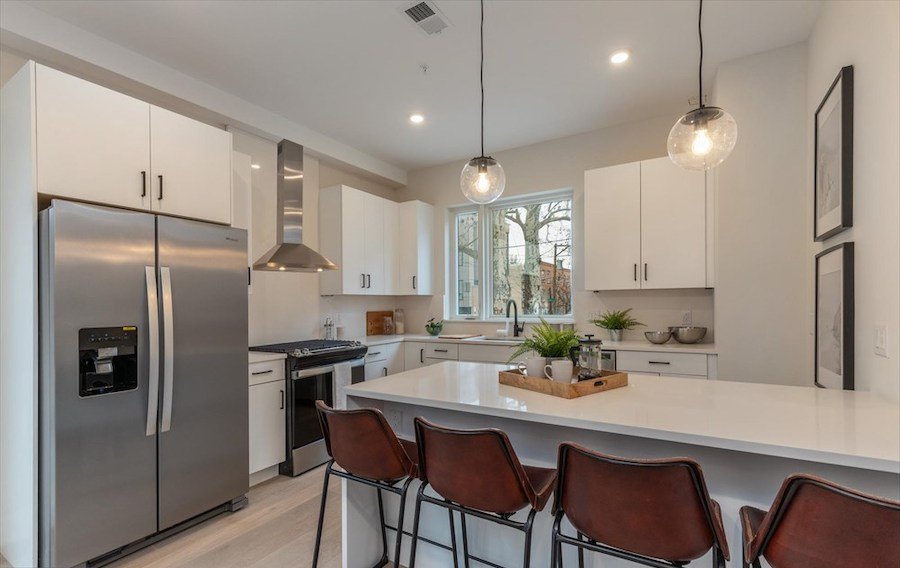 Next to it sits a sleek modern kitchen featuring Ultra Craft cabinets with soft-close doors, quartz countertops and backsplash, and Whirlpool stainless-steel appliances. Bar seating lets you enjoy breakfast as the rising sun pours through its window. 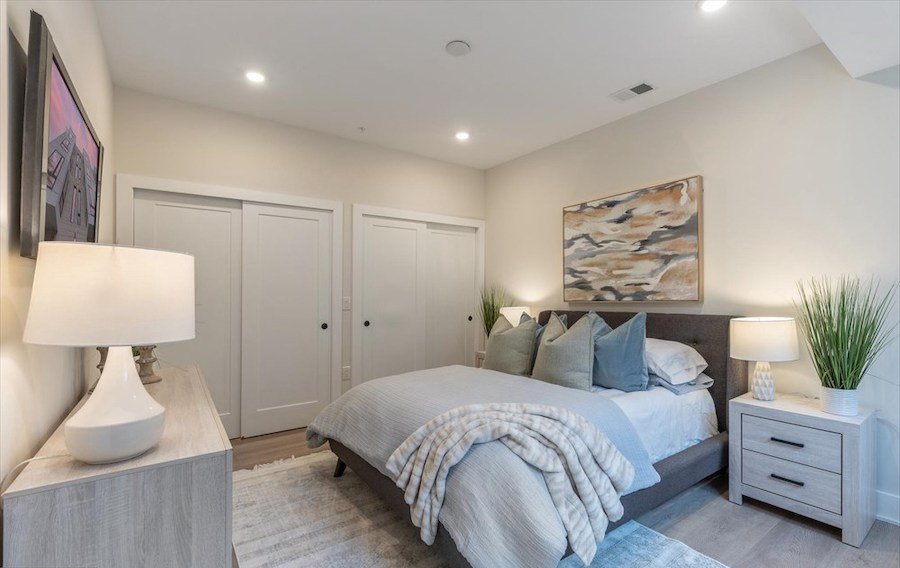 The windows are just as large in the two downstairs bedrooms thanks to large window wells that allow both lots of light in and yourself to get out in case of an emergency. The primary bedroom (above) has two huge organized closets. 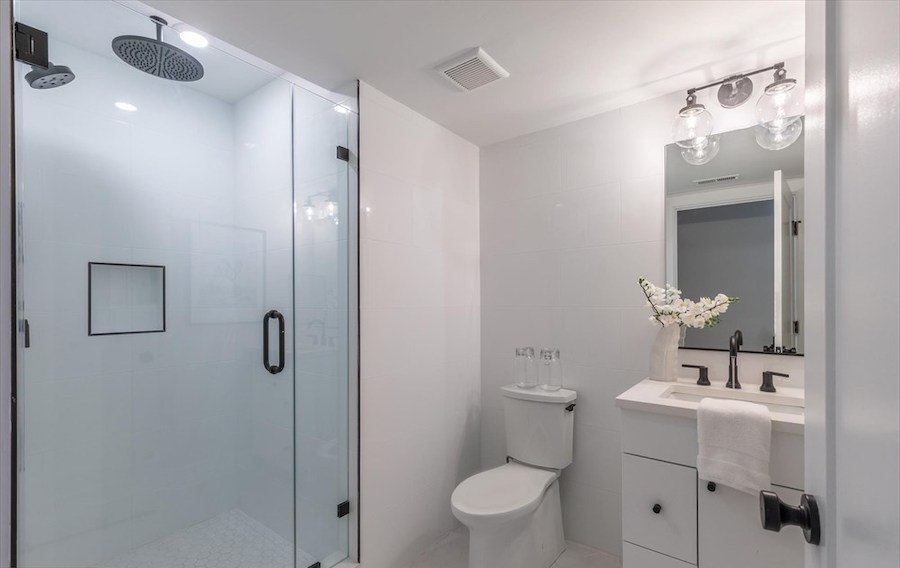 It also has an en-suite bath whose glass-enclosed shower features both regular and rain shower heads. A full hall bathroom serves both the second bedroom and your visiting guests.

Now on to the convenient-location part. Right down the block to the southwest you will find the Francisville Recreation Center and the park that surrounds it. Walk past the park, turn left onto 19th Street, and in one block you will be at Fairmount Avenue, where several great restaurants, hangouts and specialty food purveyors await.

Walk two blocks in the other direction up Wylie and you will reach Ridge Avenue, Francsiville’s rapidly transforming main drag. A four-block walk to the right puts you at Broad Street and Fairmount Avenue, where more fine restaurants, the big Broadridge Aldi and Fairmount station on the Broad Street Line can be found.

Sounds pretty smart, doesn’t it? It gets smarter: It has a Sonos home sound system, Nest thermostat and Ring doorbell. And the fixtures, finishes and floors in this Francisville new construction bi-level condo for sale are also very snazzy.

To top it all off, this unit is reasonably priced for a condo this spacious and well-equipped. The folks at Stamm have produced an attractive and fully loaded condo that lets you enjoy some of the best things this city has to offer — including great views of the Fourth of July fireworks without having to go down to the Parkway. All you have to do is go to the park.

OTHER STUFF: A $125 monthly condo fee covers building maintenance and insurance. This is one of two units remaining for sale in this building; Unit 3, a full-floor unit on the second floor with 200 more square feet, lists for $575,000.