On the Market: Earth-Sheltered Office in Cherry Hill

This studio that backs up onto Cooper River Park is one of several buried buildings designed by seminal green architect Malcolm Wells, who championed living lightly on the earth by putting structures under it. 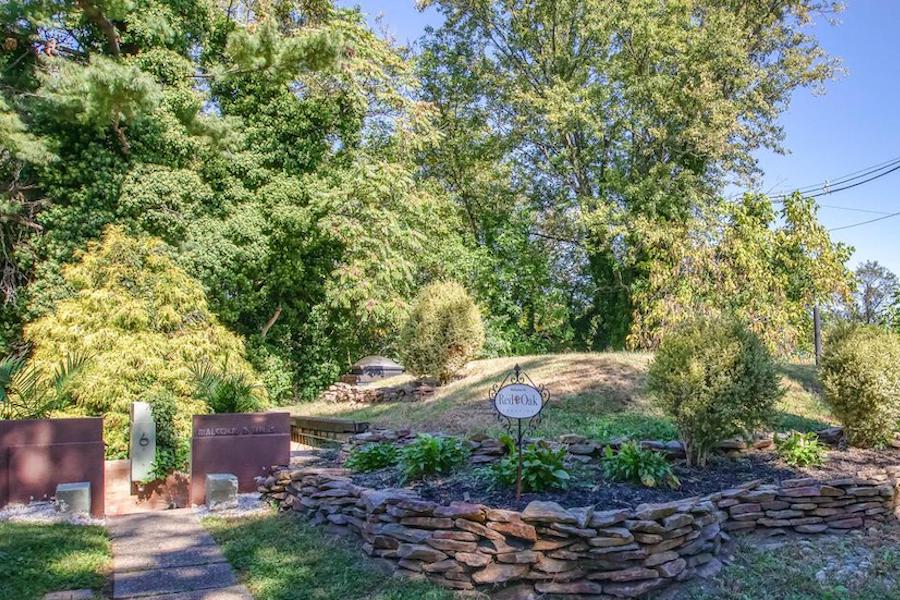 Nice landscaping job, isn’t it? What you don’t see in this picture is the (literally) groundbreaking office beneath it, designed by architect Malcolm Wells and built in 1975 at 6 Dale Ave., Cherry Hill, N.J. 08002 | Bright MLS images via Daniel R. White, Realtor

Right next to the cloverleaf interchange of Cuthbert Boulevard and Marlton Pike in Cherry Hill sits Dale Avenue, a short dead-end street accessed from Park Drive in Cooper River Park.

This little lane contains four bungalows, a vacant lot and this low mound next to a circular drive at the end of the street.

The only clue that something more than a nicely landscaped hillock sits here is the brown adobe-style gateway off to the left, one panel of which bears the name “Malcolm B Wells.”

Wells used the structures under that mound as an office for his architectural practice after building them in 1975. You can’t see this Cherry Hill underground office for sale from Dale Avenue, but when you go around back to one of the sets of stairs leading to the sunken courtyard separating the two structures, this is what you see: 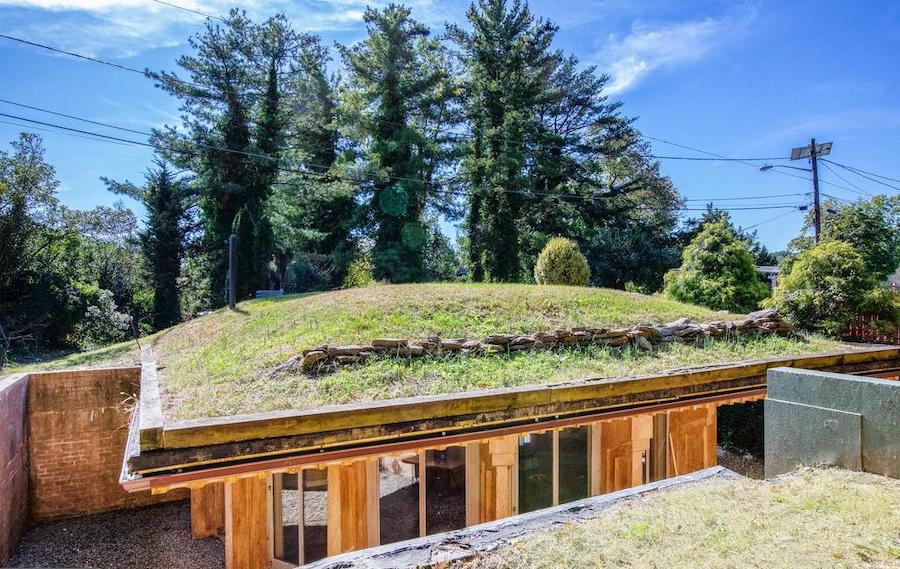 With this and several other houses the Camden-born, Haddonfield-raised Wells (1926-2009) built in the 1970s, the self-taught (after engineering courses at Georgia Tech and Drexel) architect hoped to spark a revolution in the way we build.

He called his concept “gentle architecture” — an approach to building that would “leave the land no worse than you found it.”

His epiphany that led to his advocacy of a more environmentally friendly architecture came after he designed the RCA pavilion at the 1964-65 New York World’s Fair. Realizing that this building would be demolished after standing for only two years, and further realizing that every building he had designed up to that point had destroyed whatever had previously lived there, he set about designing buildings that would live more lightly on the earth — mainly by burying themselves in it. 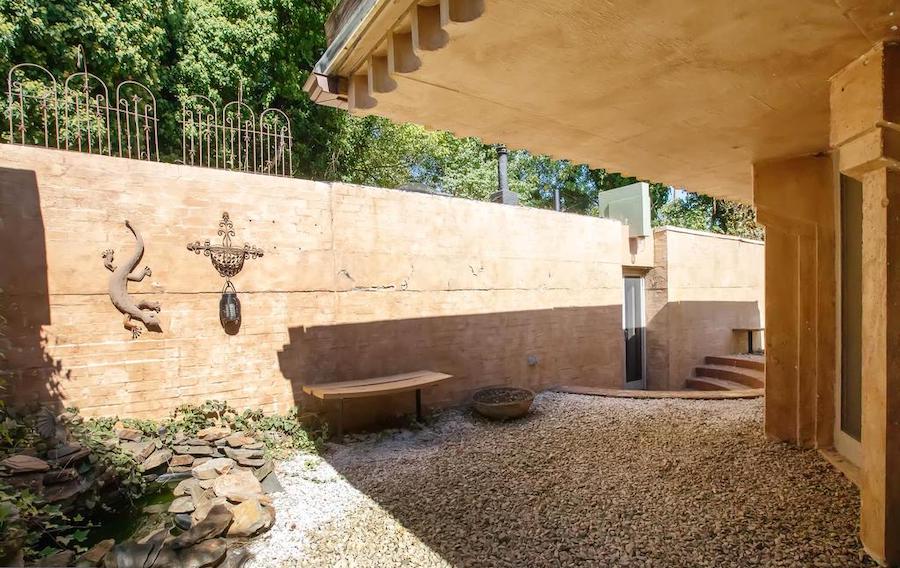 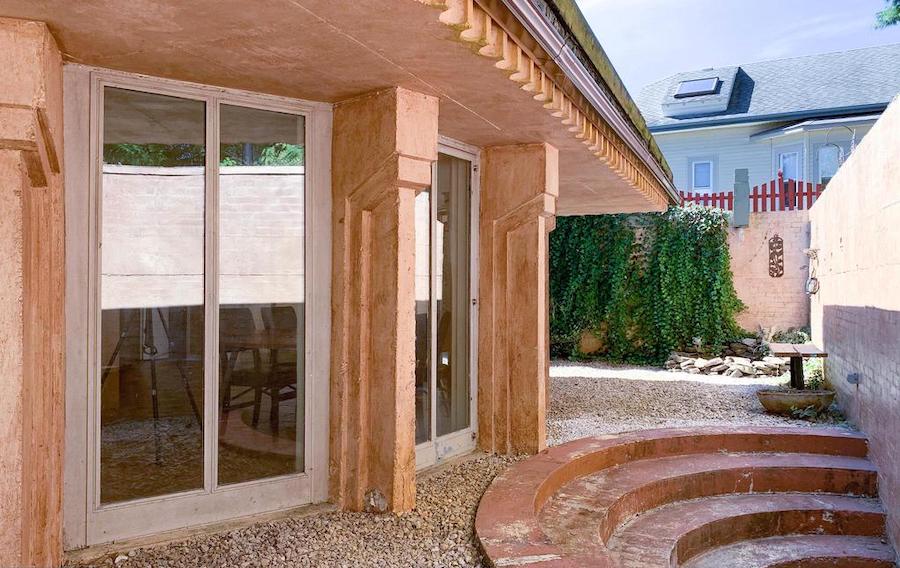 Courtyard and front of main building 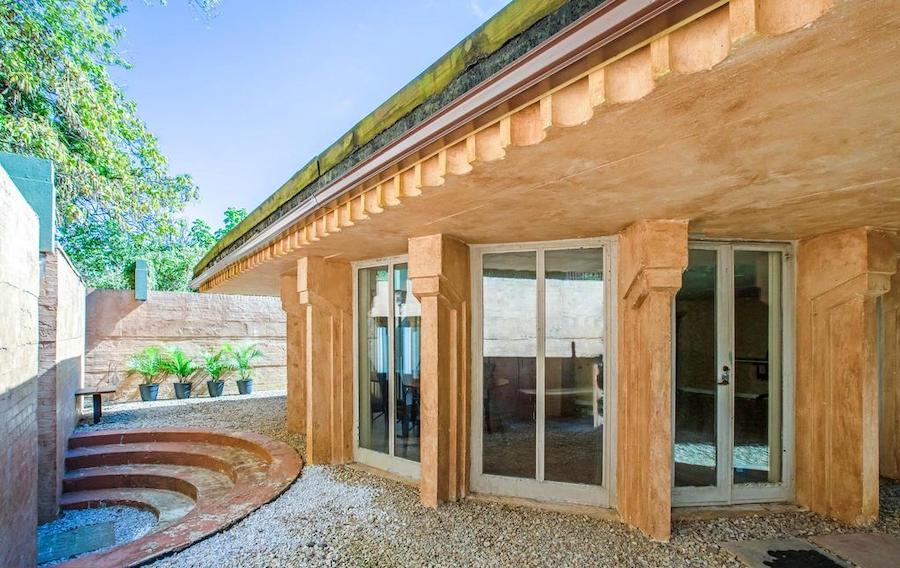 Courtyard and front of main building

This property consists of two underground buildings that flank a sunken courtyard. The courtyard contains a fish pond, attractive foliage and curved concrete stairs that lead to the smaller building. 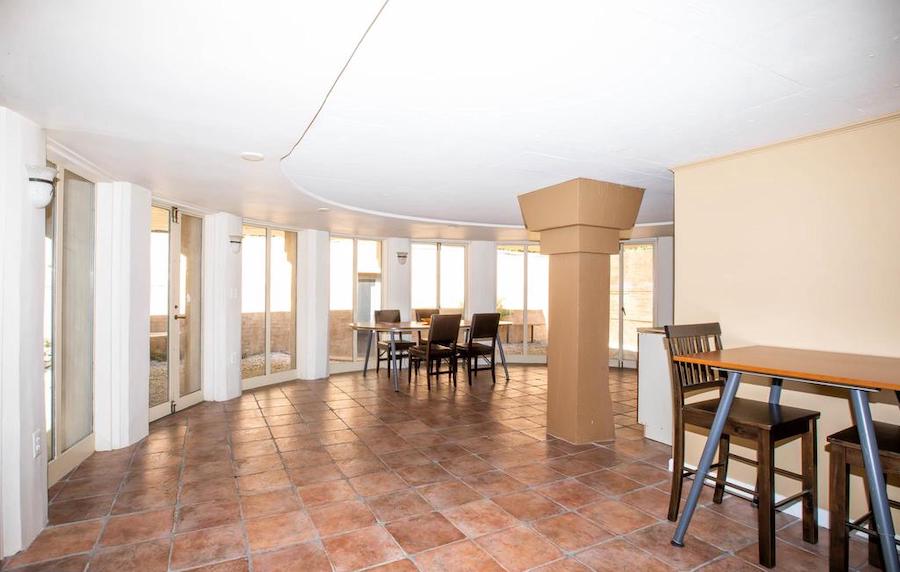 The larger building consists of three rooms and a full bathroom. The main room, which could function as a living and dining space in addition to a home office, features a tile floor and a semicircular floor-to-ceiling wall of windows that face the courtyard. 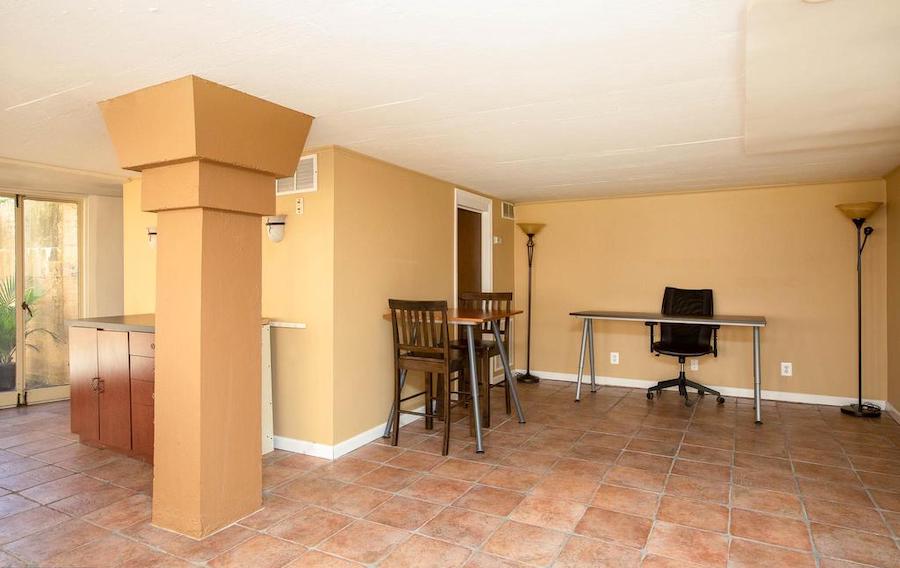 An alcove on one side of the rear of this room could serve as a home office space or a dining room. 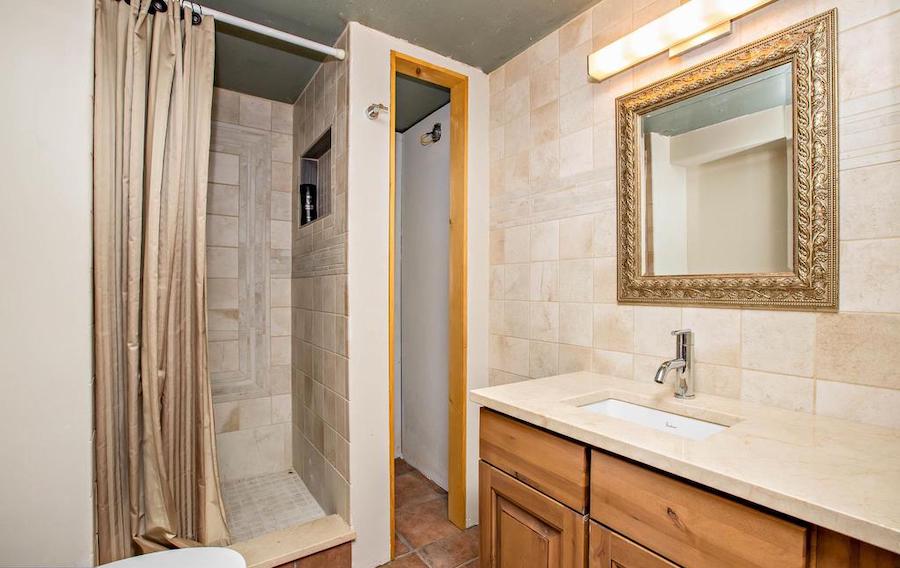 A doorway leads from this alcove to an anteroom and the full bathroom. 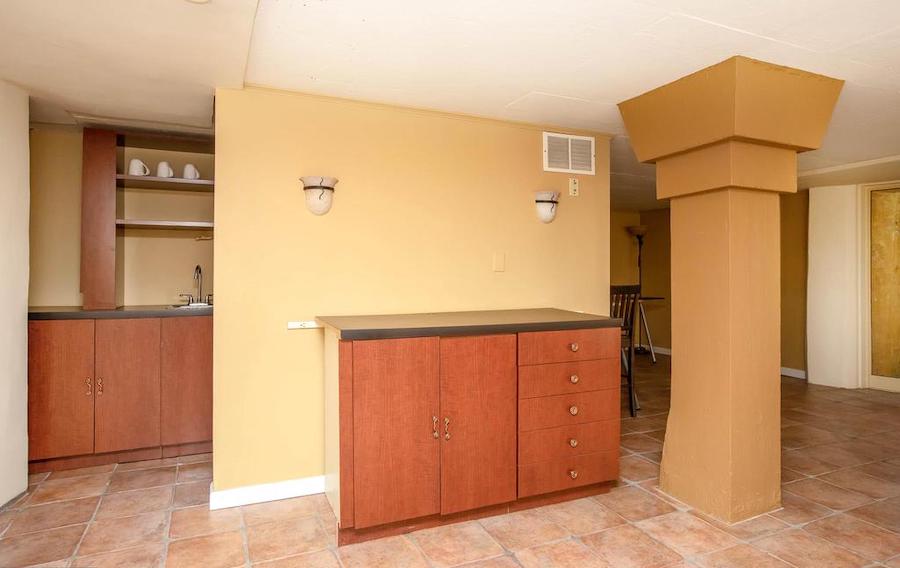 Next to the alcove is the kitchen, which appears to be configured for office, not residential, use. You’d need to add a range and fridge to use this space for living as well as working, but that shouldn’t be difficult to do. 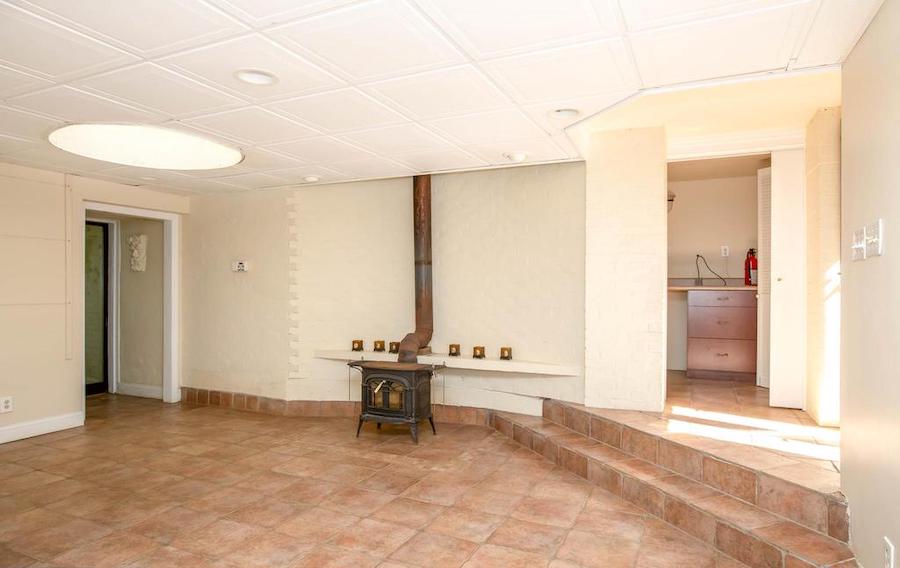 The curved concrete steps lead to the doorway to this room in the smaller structure. This room gets its natural light from a skylight embedded in the berm above.

Were this to serve as a live/work office, this would likely be the bedroom, even though this structure only has a half bath. 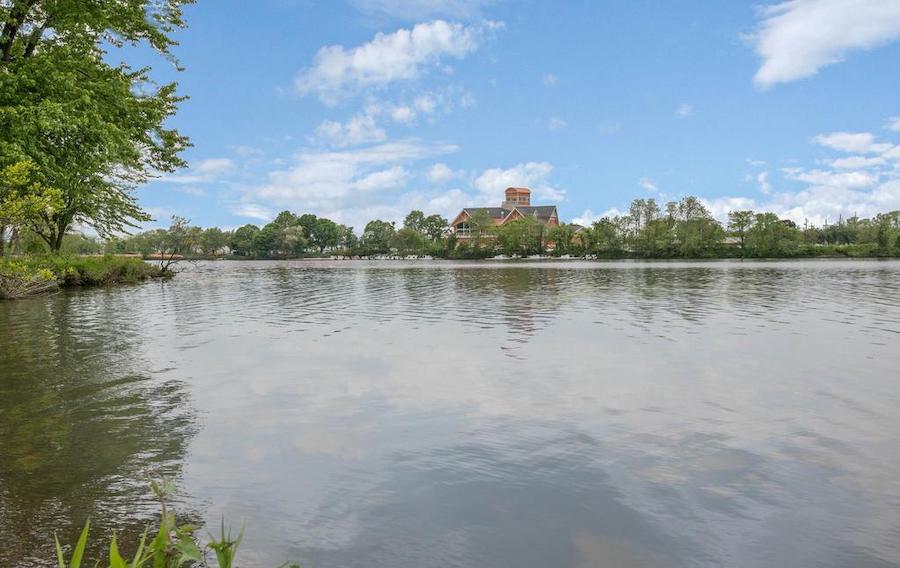 Cooper River Park, view from back door of rear building

Another door in the room behind this one leads to doors that open out onto a large pond that Park Drive separates from the rest of Cooper River Park.

Because the earth provides the insulation, the cost of heating and cooling these structures should be very low. So should overall maintenance costs thanks to its concrete construction and landscaped earthen roof.

While this Cherry Hill underground office for sale may not have met all 15 of the criteria for sustainable building Wells laid out in Architectural Digest in 1971, it does meet two of the most important: It can provide habitat for both wildlife and humans, and it is beautiful. It’s the only structure on Dale Avenue that you could consider an extension of the park next to it.

Wells didn’t quite achieve the revolution he sought when he started designing buried houses like this one, but he did make them socially acceptable: a 1979 New York Times story estimated that from a base of zero at the start of the 1970s, underground houses would number as many as 2,000 by the end of the decade. Wells even started a day to commemorate earth-sheltered housing: National Underground America Day, observed on May 14th. National Day Calendar, which chronicles celebrations great and small, estimated in 2019 that some 6,000 households lived underground in North America.

Thanks to both its environmentally sensitive design and the way Dale Avenue is laid out, you will forget that your workspace sits right next to one of the busiest highway junctions in Cherry Hill. And because of its design, even though its lot is zoned commercial, you could conceivably make this your live/work space as well.

Wells also designed several more conventional modern houses in this area, like this one in Cherry Hill, earlier in his career before his 2009 New York Times obituary noted that he also built “underground homes and offices for himself, first in New Jersey and later on Cape Cod.” As he was living in Wellfleet, Mass., at the time of his death, and given that he spent most of his career in this area, this has to be his underground New Jersey work.