On the Market: Restored 1852 Townhouse in Rittenhouse Square

This Delancey Place pioneer hides a Greek-accented interior behind its less-showy Federal facade. A recent renovation restored its appearance in 1931. 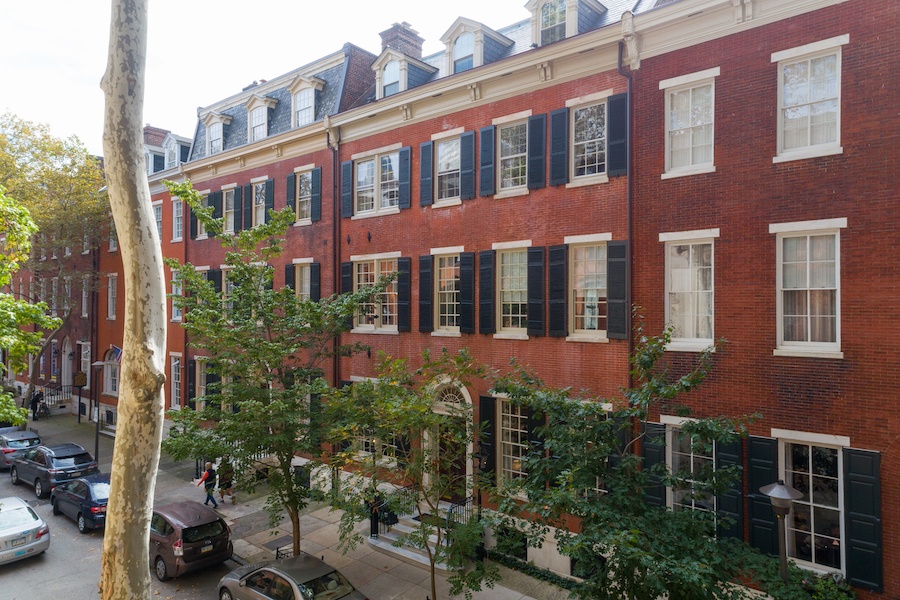 Before the Civil War, the area just west of Rittenhouse Square was known as “Goosetown.” Far from the ritzy neighborhood we know now, this area contained a brewery, some modest houses for the brewery workers, a yard where the city dumped paving materials, and the goose pond that gave the area its name.

Right around the time artist David Johnston Kennedy wrote his short description of Goosetown in 1856, Rittenhouse Square as we know it now began to take shape. At that time, its premier address — Delancey Street/Delancey Place — ran through vacant land.

This Rittenhouse Square Federal townhouse for sale is one of the houses that made the street fashionable.

It was built as one of many speculative houses John McCrea and his brother erected in the 1850s and onward. The McCreas built this one in 1864. Like most of their houses, this one was built to suit the conservative tastes of Proper Philadelphians. Its first occupant was a Mexican War veteran, Gen. Henry Crosman, and his wife Hannah. 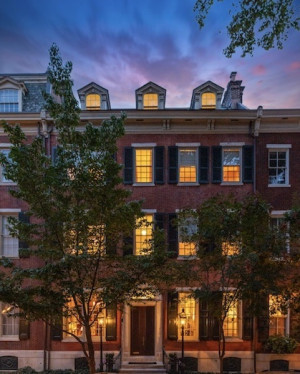 The house passed through three more hands before falling into builder Alex Irwin’s in 1931. Irwin decided to bring the old house into his own time and commissioned architect Herman Louis Duhring to do the deed. Duhring’s renovation also added two new rooms to the rear of the house, occupying part of its backyard.

Over the 71 years between this renovation and its latest one, one owner attempted to divide it into an office and four apartments without success. The house also had a role in the movie Trading Places. 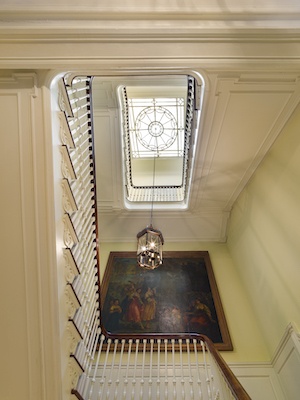 This house’s current owner bought it in 2002 and commissioned designer Thomas Jayne to restore it to its 1931 splendor. And as these photos should make clear, Jayne did a bang-up job.

Behind its Federal facade lies a house that mixes classic Colonial and Federal design with plenty of Greek Revival details. And its double width makes it great for entertaining as well as living.

The front entrance leads to a corridor that separates the living and dining rooms from the library and kitchen. Midway down this corridor lies the house’s grand main staircase. 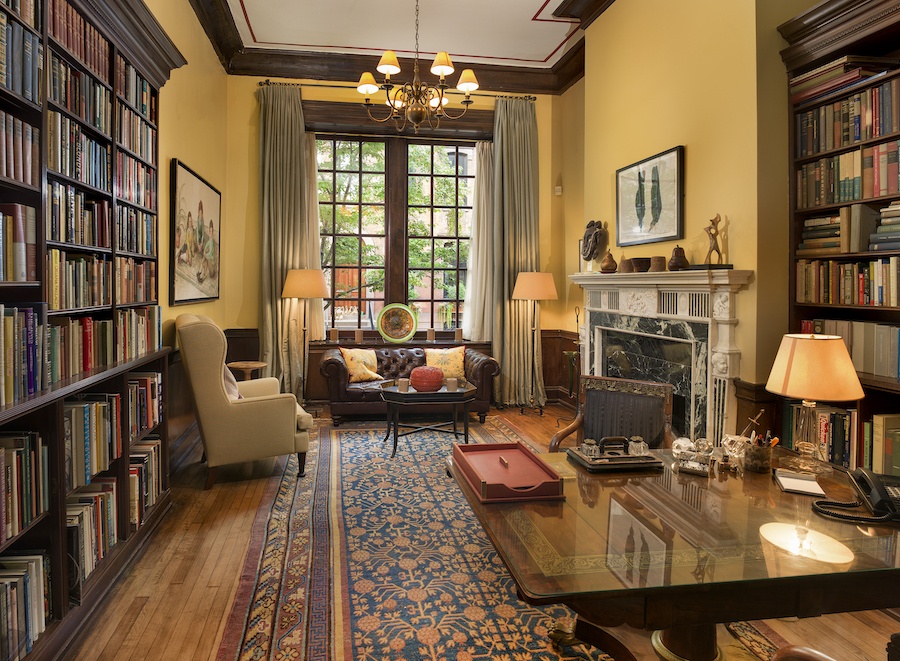 The lemon-yellow walls of the library, to the left of the entrance hall, brighten the room and keep it from looking too gentlemen’s-clubby. But it has plenty of dark wood trim all the same. Its fireplace is one of those Greek-inspired details. 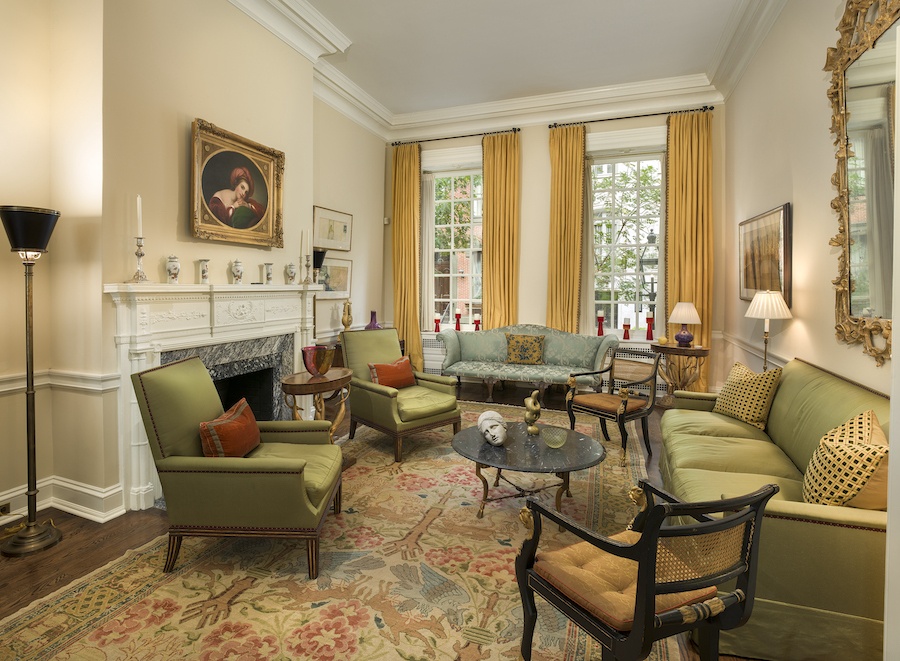 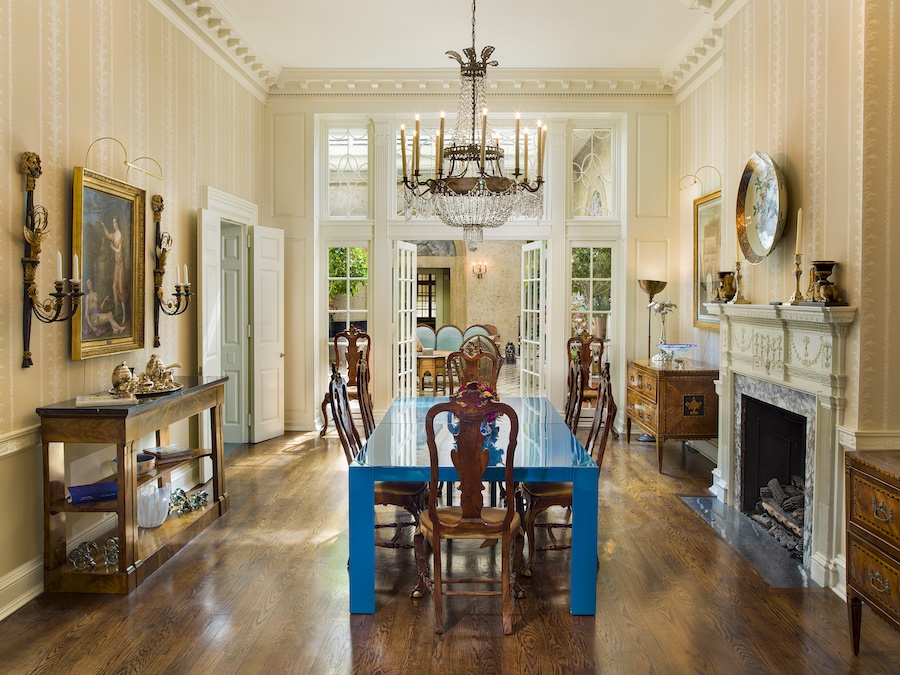 The fireplaces in the formal living and dining rooms are more Federal in their appearance but have some ornamentation and detailing that recall ancient Greece. 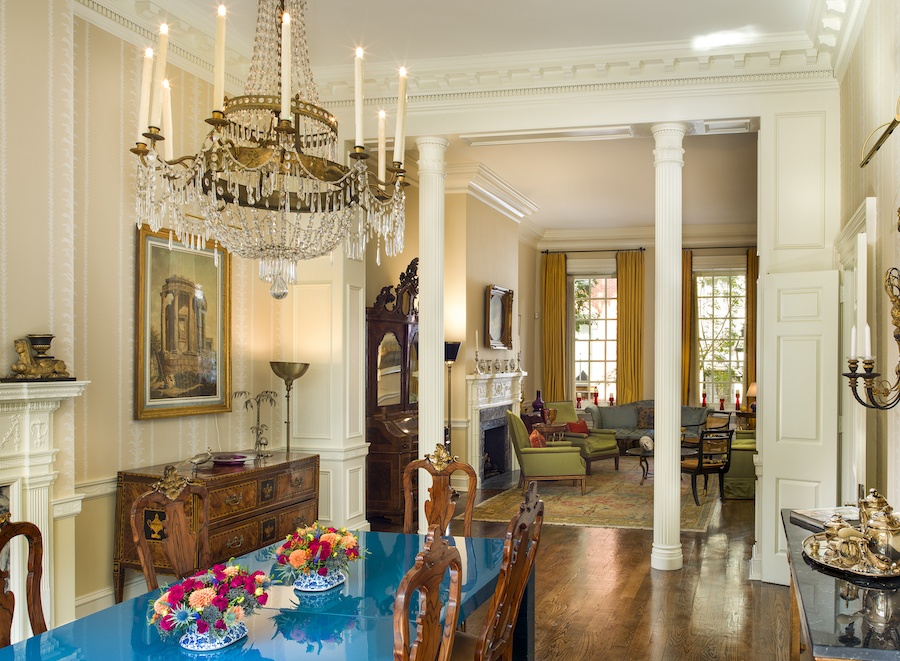 A large archway supported by Greek columns turns these two rooms into a single open space. 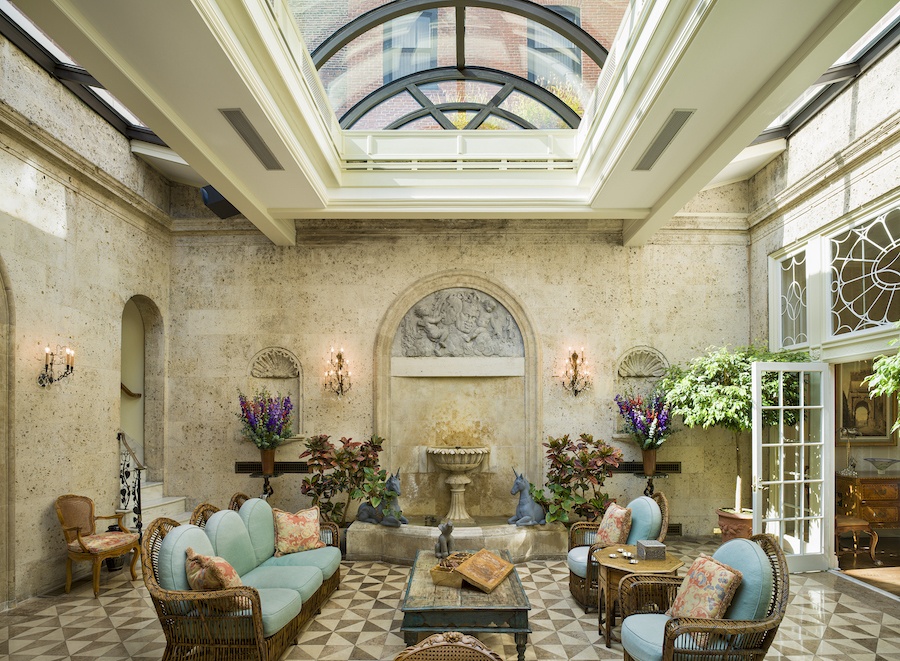 French doors topped by classically styled windows separate these rooms from the solarium, the first part of the 1931 rear extension. Beyond it lie a pantry, a wet bar and a powder room. 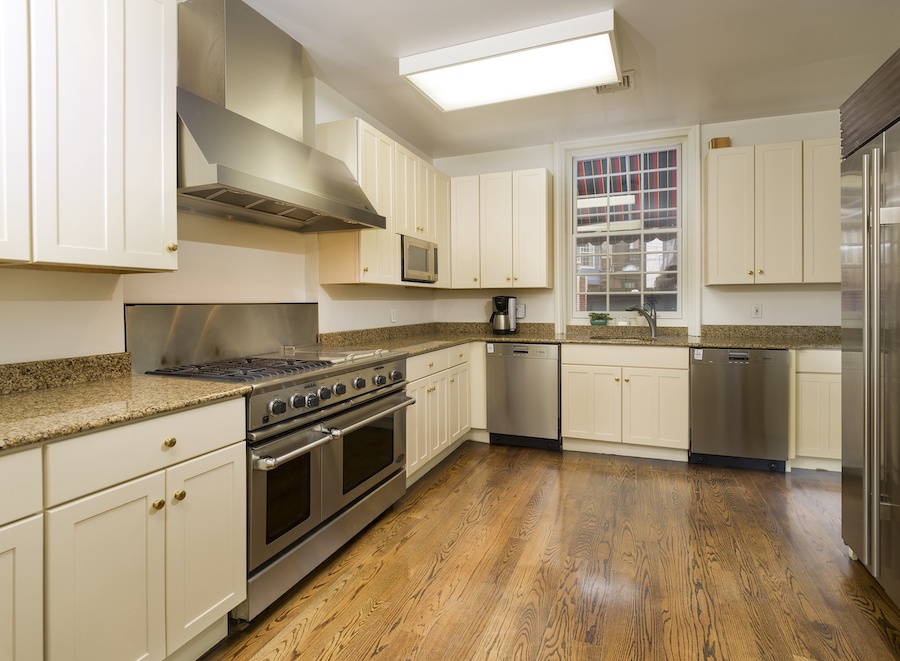 From the pantry, you have to cross the solarium and turn right once in the corridor to reach the kitchen. This room is the only major alteration made to the house in the 2002 renovation. Simple, modern and well equipped, it replaces the original basement kitchen. That space became a five-car underground garage. 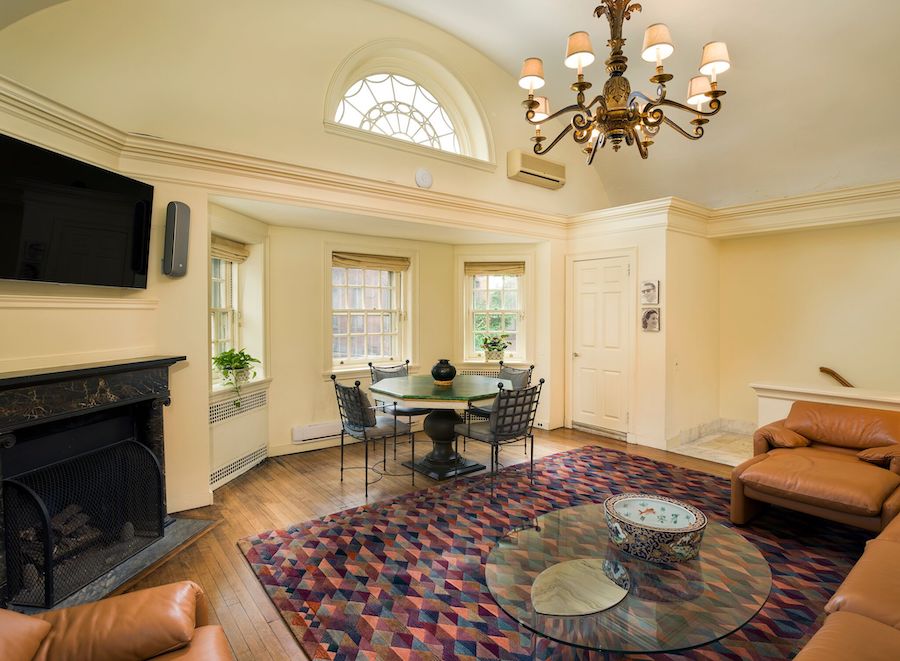 One floor up from the rear of the solarium is the media room. This bay-windowed, straightforwardly colonial space with an Art Deco-ish barrel-vaulted ceiling is the other main room in the 1931 addition.

The primary suite takes up the entire second floor of the original house and has everything you need for both relaxation and work. 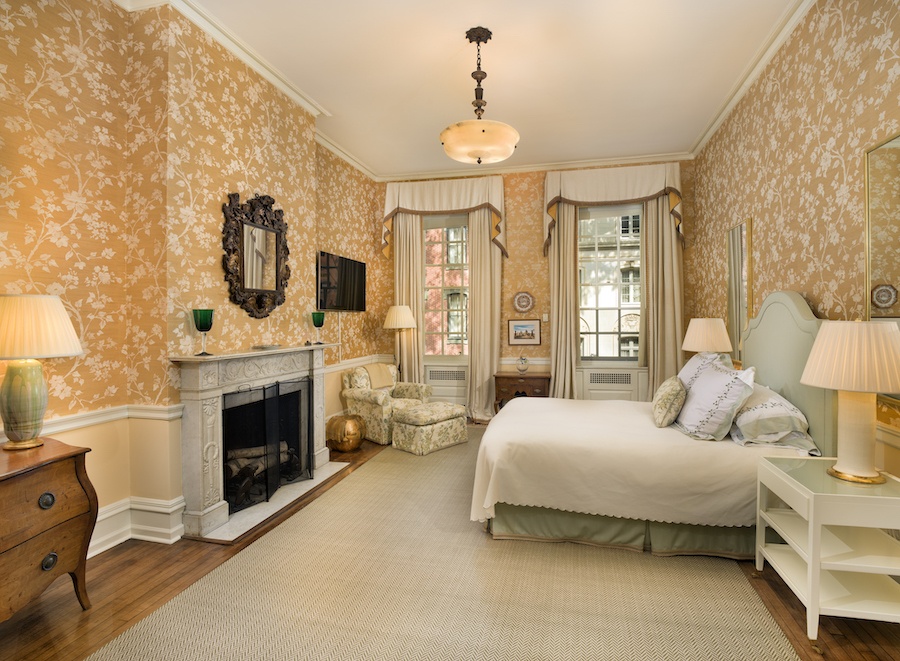 The floral wallpaper in the primary bedroom will lift your spirits in the morning. Then, after showering in one of the suite’s two bathrooms, you can make coffee in the kitchenette between the bedroom and the study. 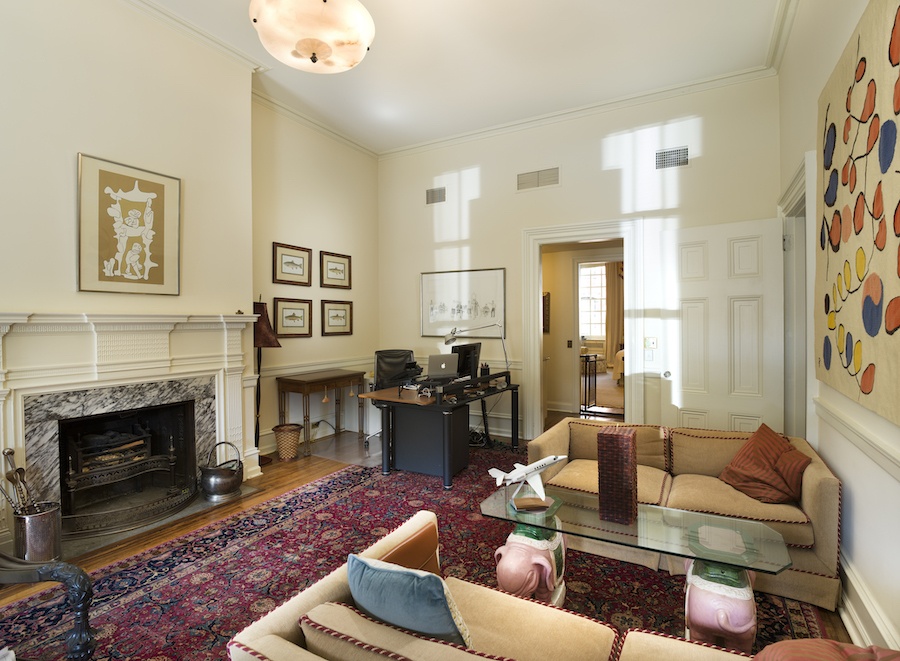 The study’s pale yellow color palette should keep your spirits up. Or if you need a stronger boost, you can go work out in the gym next to the study. 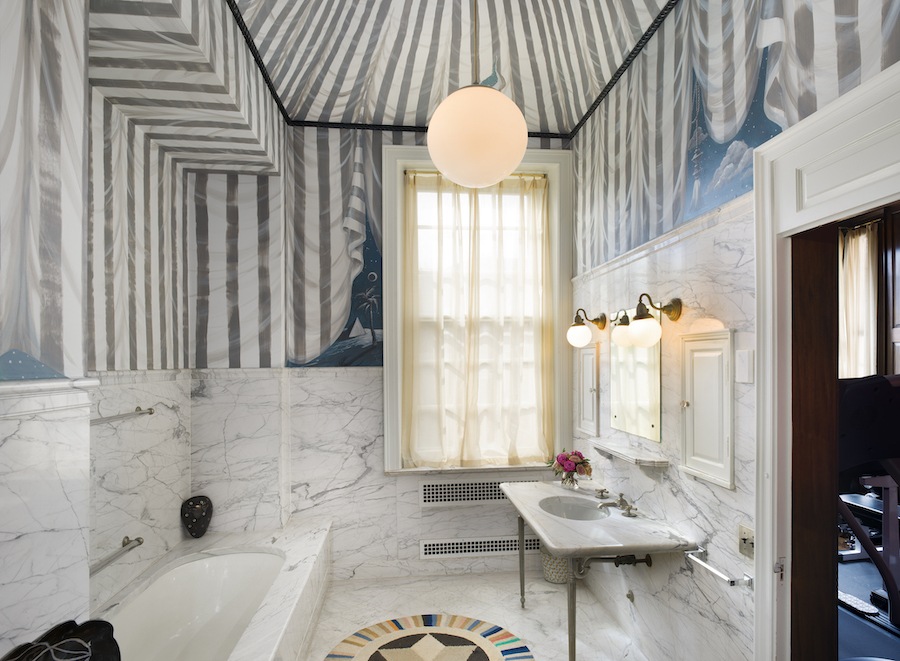 Primary bathroom next to gym

And a bathroom next to the gym gives you a place to wash up after you work out. The marble wainscoting and floors in the bathrooms was another of the changes made in 1931. 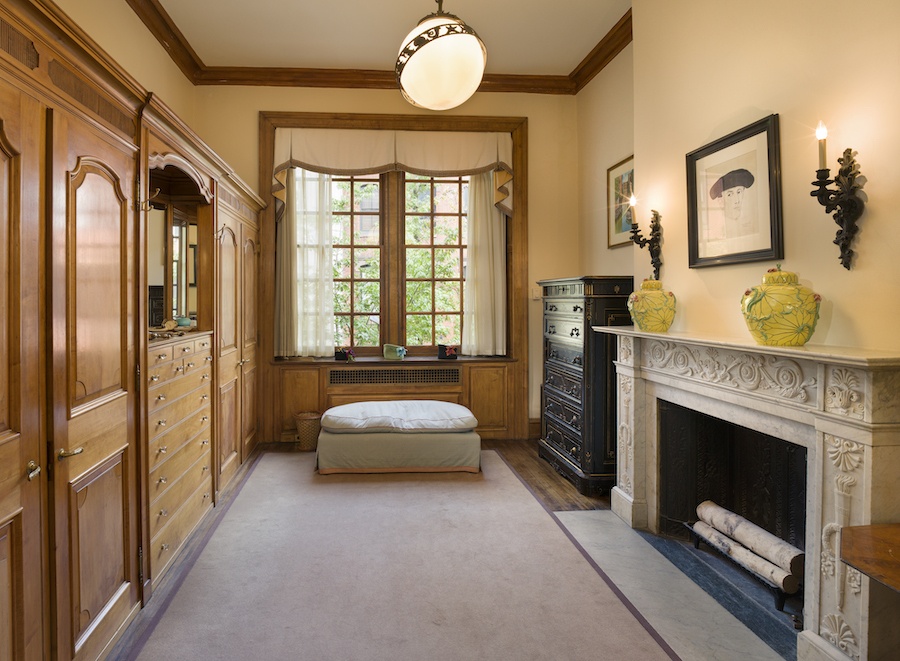 So, I suspect, was the addition of the globe light in the primary-suite closet and dressing room, the most Art Deco design element in the house.

Four bedrooms, each with its own fireplace, and two baths fill the third floor, and the fourth floor has a sixth bedroom, a fifth full bath, a large walk-in cedar closet and a two-room au pair/nanny suite with its own bathroom.

And above all this, a roof deck lets you enjoy panoramic views of the Center City skyline. Below all this, in addition to the garage, you will find a wine cellar. An elevator connects all five floors.

This Rittenhouse Square Federal townhouse for sale, then, lets you live extra large in a house that has it all. Its simple 19th-century elegance has been meticulously restored through the prism of the Great Depression. And it’s so well outfitted, you may never want to leave it. But with all the things Rittenhouse Square has to offer just a short walk away, why wouldn’t you want to get out every once in a while? Besides, the neighborhood has come a long way from Goosetown.