James Price wouldn’t recognize what surrounds the house he built in 1710 at all, but he would still recognize the house, even with the much larger 1810 addition tacked onto it. 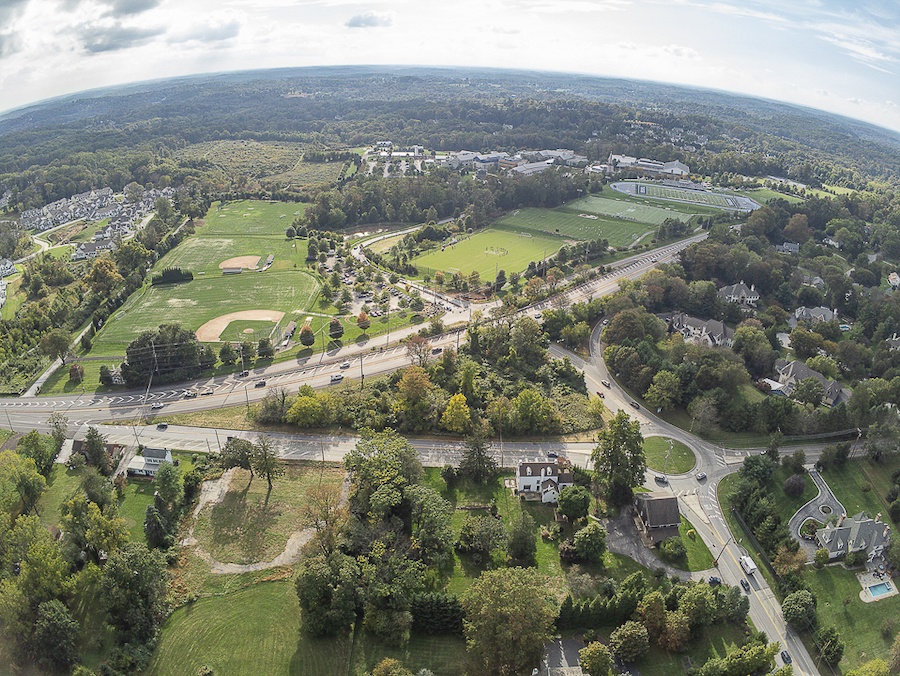 Newtown Square still retains some of its Colonial character, but much less than it once did thanks to developments like what you see in the upper part of this photo. Near the bottom, however, at a crossroads dating to the early 1700s, is a bit of that past: 571 N. Newtown Street Rd., Newtown Square, PA 19072 | Photos: Dave Ocenas via BHHS Fox & Roach Realtors

In 1710, the photo above would have contained only two of the items you see above now: the north-south road that crosses the picture about a third of the way up — Newtown Street Road — and the road that curves away from it to the northwest —Darby-Paoli Road. (Both the overpass and the traffic circle came much, much later.)

Five years later, the road that heads down from the traffic circle — St. Davids Road — would be built to give Newtown residents access to the new church built at that settlement. By then, it also had one other item: the rear wing of the house you see to the left of the intersection of Newtown Street and St. Davids roads. 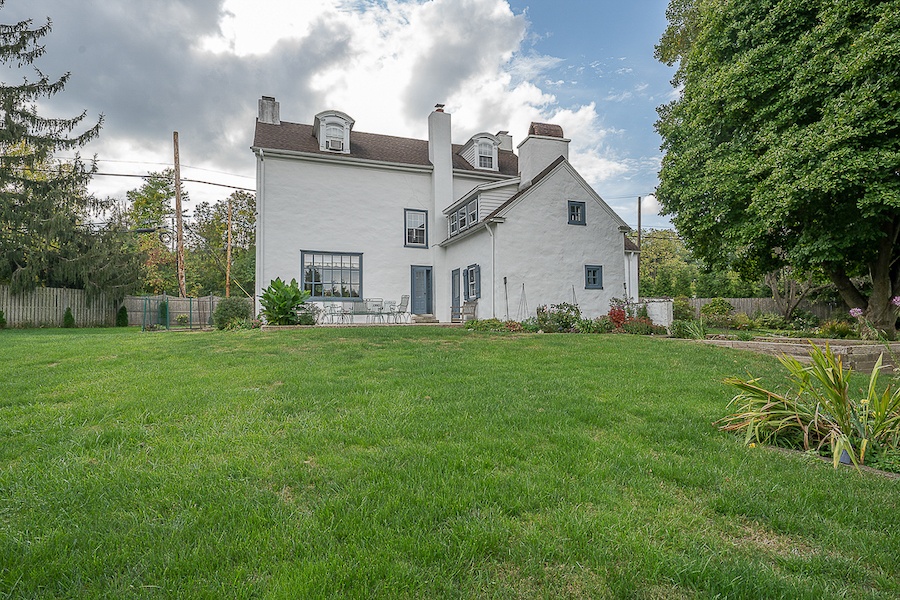 That modest structure was built by one James Price, who received a grant of land from William Penn, who laid out this “new town” to be settled by buyers of surrounding farmland in 1681. (Penn would establish another new town in Bucks County two years later.) The Newtown Square Historical Society gives 1710 as the date that little house was built; an article about the house today that appeared in Aronimink and Greene Countrie Living, a magazine published for residents of a subdivision on the other side of the Aronimink Golf Club from this house, dates it to 1715. 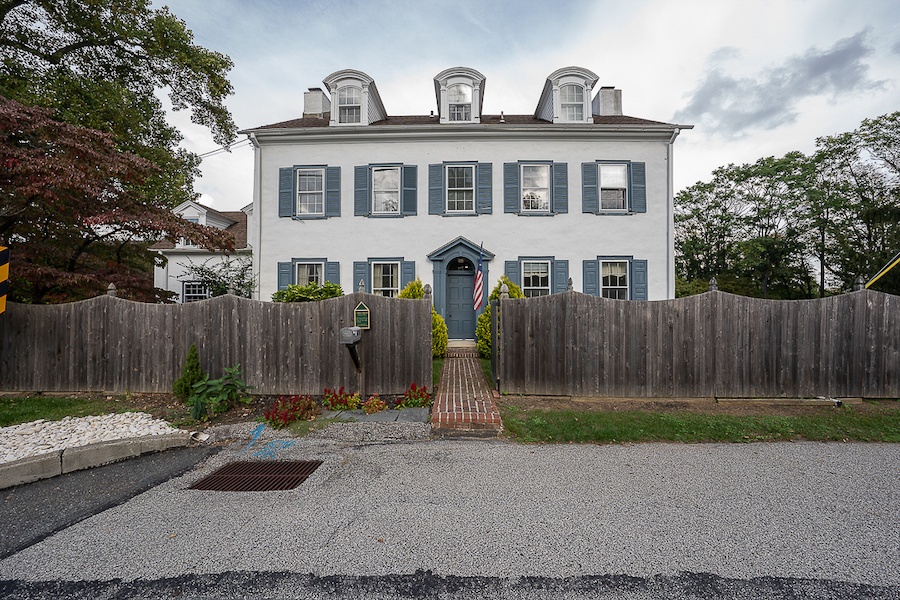 What you see in this photo, however, did not come into being until 1810, when a subsequent owner, Joseph Lewis, built the more substantial center-hall house that now faces Newtown Street Road.

That house served as the center of a much larger farmstead than the 2.25 acres surrounding it now. But even though the roads have become busier and the area more developed, the essential character and appearance of this Newtown Square historic house for sale remain unchanged save for a little updating here and there. 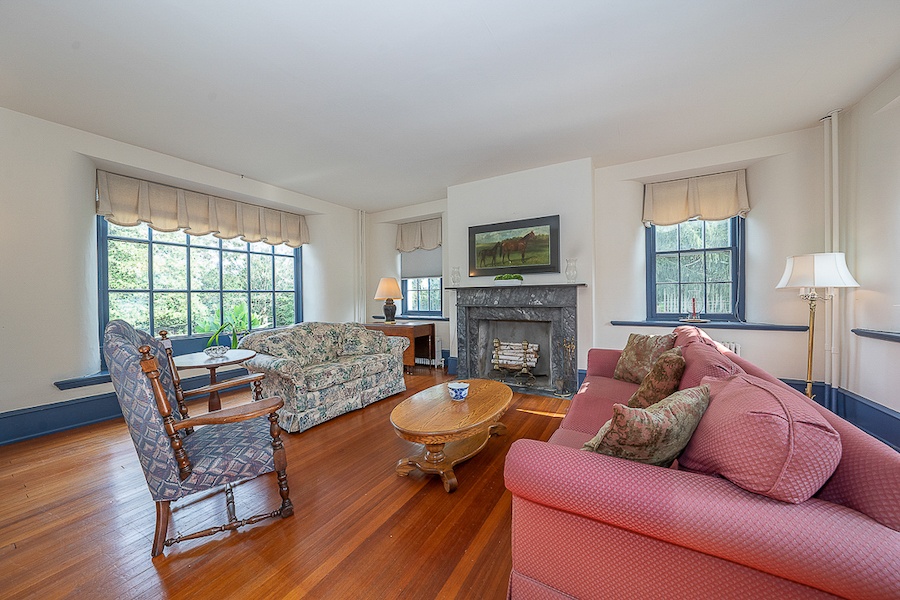 The layout of the main house is exactly what you would expect. To the right of the foyer is a living room with a fireplace and deep windowsills. The larger window in the rear, I suspect, is one of those later updates. 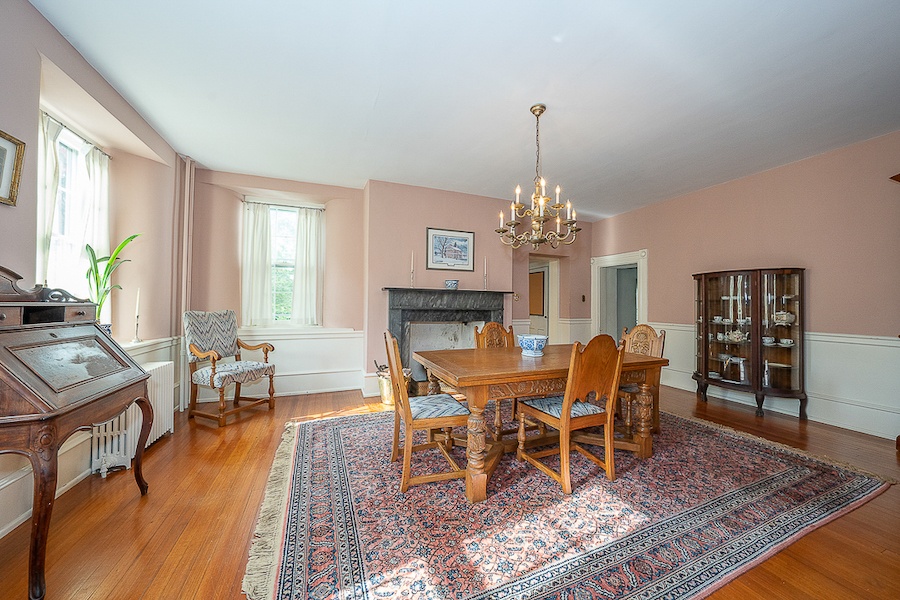 To the left is the formal dining room. It too has a fireplace and a sparkling hardwood floor. 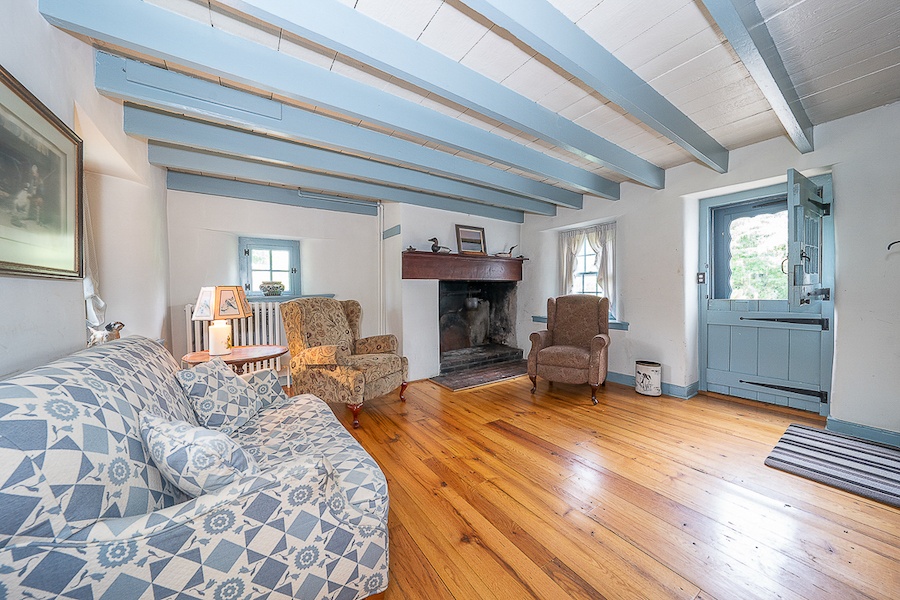 The original James Price house lies behind the dining room via the doorway at the right in the dining-room photo; its living quarters now serve as the family room. Its original hearth fireplace, beehive oven and Dutch door have all been well preserved. You will also see that the doors in this house have their original 18th- and early-19th-century hardware. 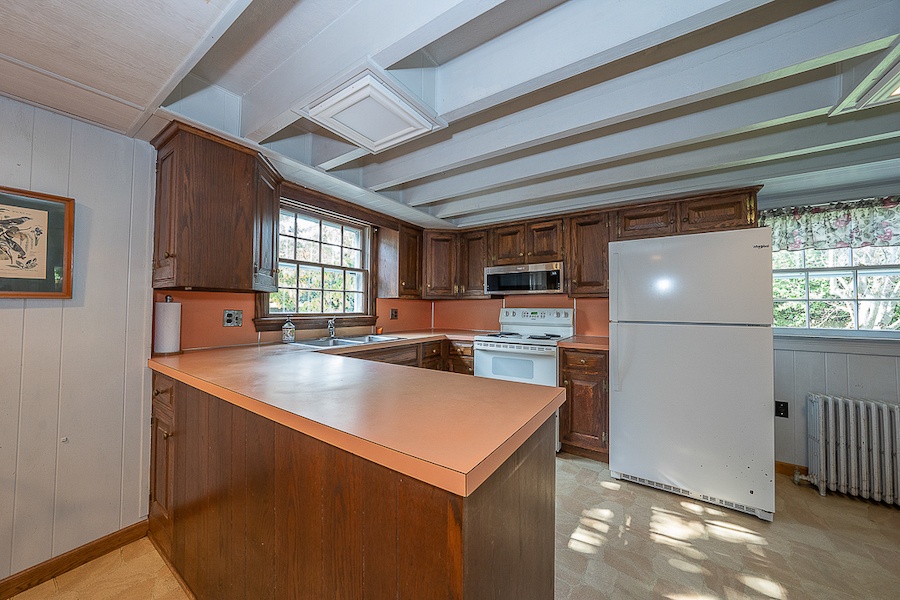 The door next to the fireplace in the dining room leads to a side wing that appears to have been added sometime after the main wing was built but still some years ago. This wing contains a bonus room on the upper floor and the kitchen and breakfast room on the main floor. 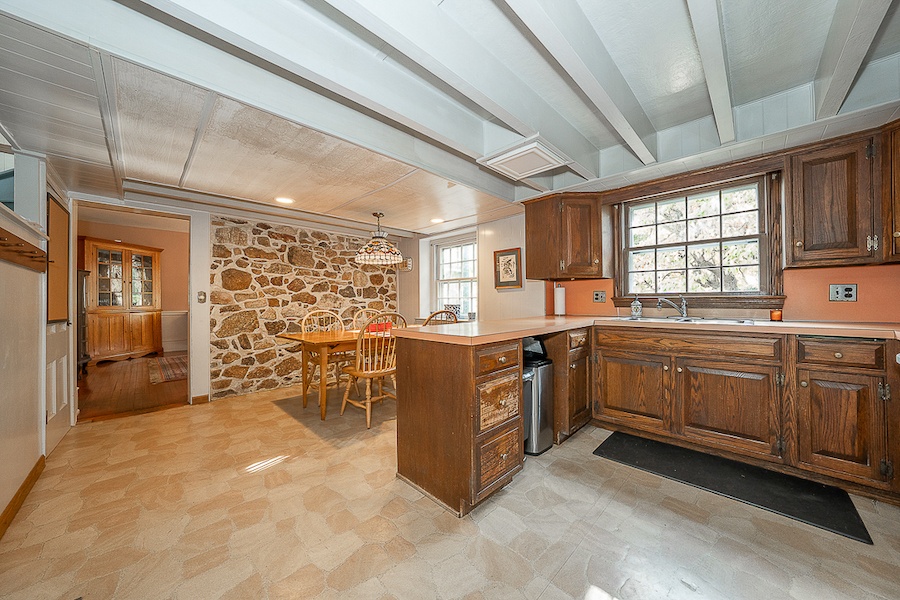 A stone accent wall graces the breakfast room. While the kitchen is in okay shape, it could use updating. 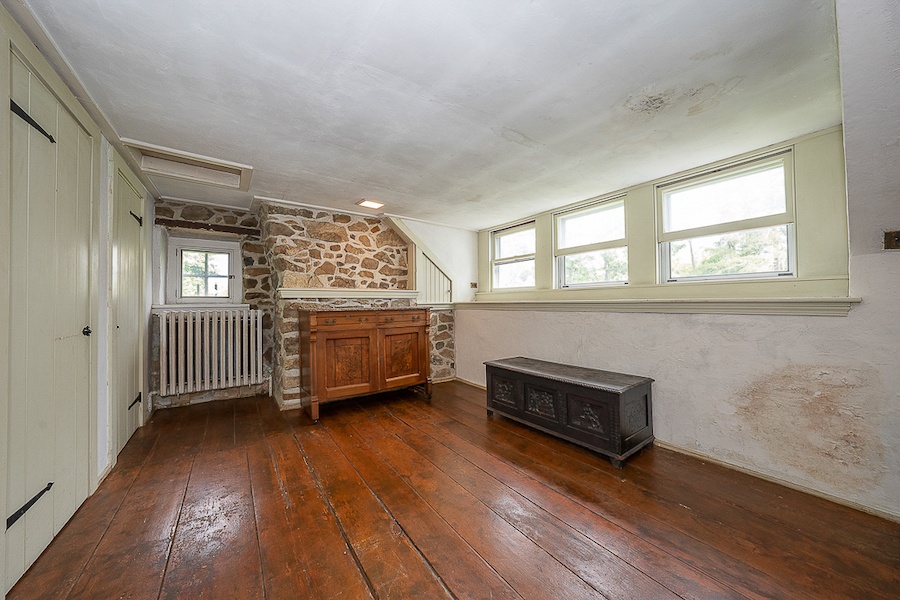 The upper two floors contain five bedrooms. The smallest of the five sits above the family room and is connected to it by stairs. 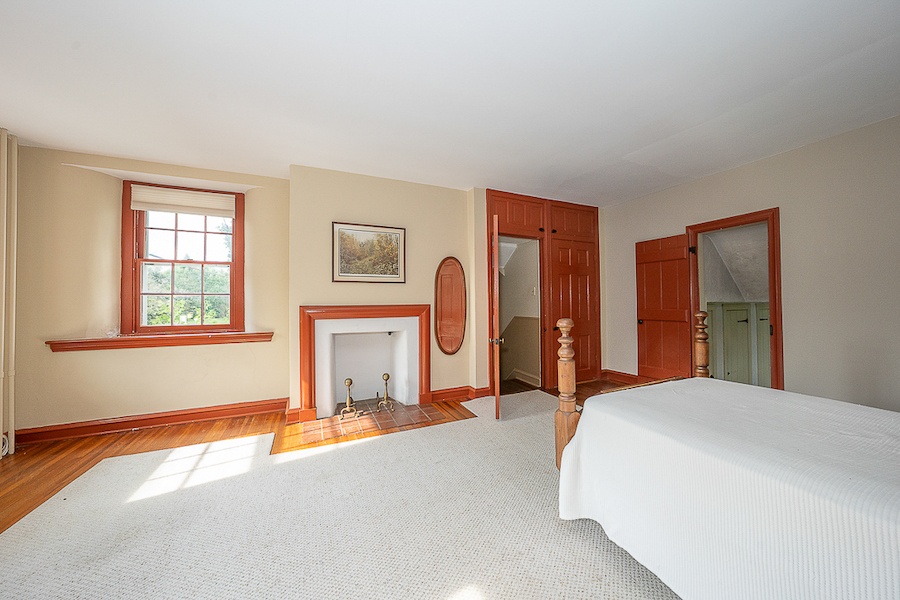 The primary bedroom, whose fireplace is now decorative, has doors leading to the upper floors of both the original house and the side wing. The third bedroom on this floor also has a decorative fireplace. 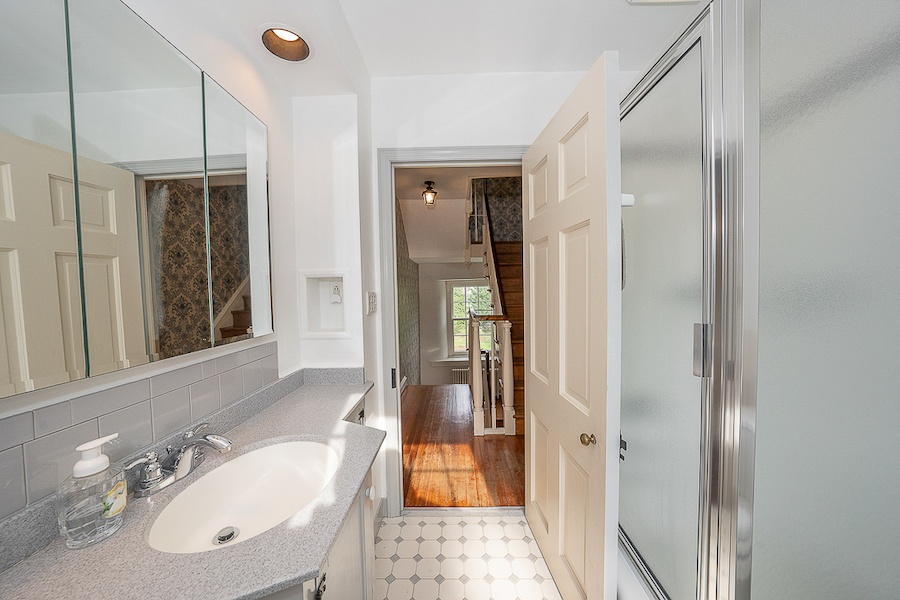 In between the bedrooms is a recently updated bathroom with a stall shower and modern vanity. The fourth and fifth bedrooms and another hall bath lie on the third floor. 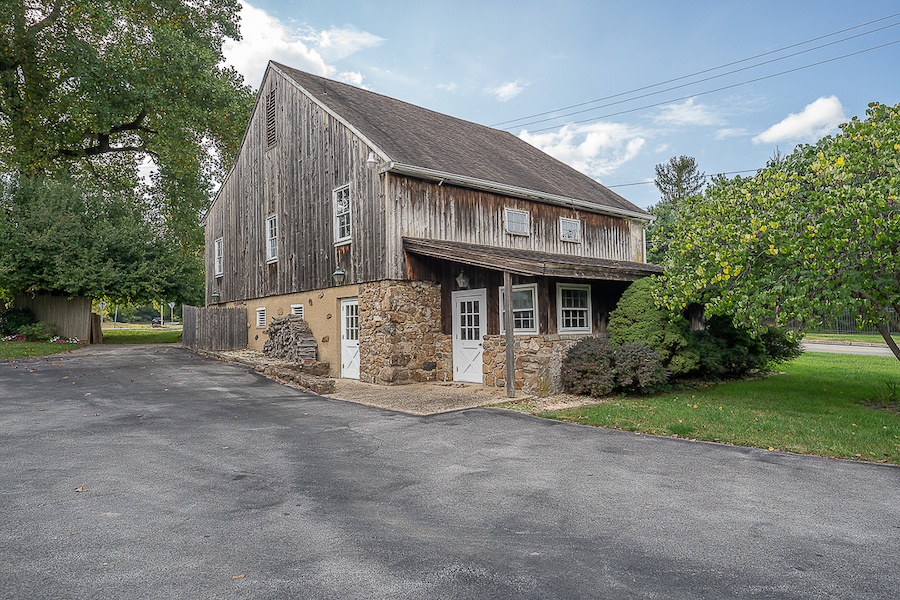 Also on the property is a two-story bank barn. Its lower level served as a veterinary office for some years and is suitable for conversion to guest quarters.

In the 19th century, a post office also stood on the property, and a public school for the village that had sprung up around it was built in the 1870s. Both of these are now gone, but you will find Episcopal Academy on the far side of the Newtown Street Road/Darby-Paoli Road interchange. Head south on Newtown Street Road for about a mile and you will find yourself at Ellis Preserve, whose shopping plaza includes a Whole Foods Market. More businesses line West Chester Pike on either side of Newtown Street Road.

This Newtown Square historic house for sale, as you can see, has been very well cared for and has taken the changes around it in stride. You now have the opportunity to serve as its next steward.

OTHER STUFF: This house’s lot can be subdivided, and you could if you wanted to build a new house on that second lot.