U-City Apartment Building Takes Modular Construction to the Next LVL

Alterra Property Group had such a great experience assembling the building down the block that it doubled down on modular construction with this amenity-filled project. 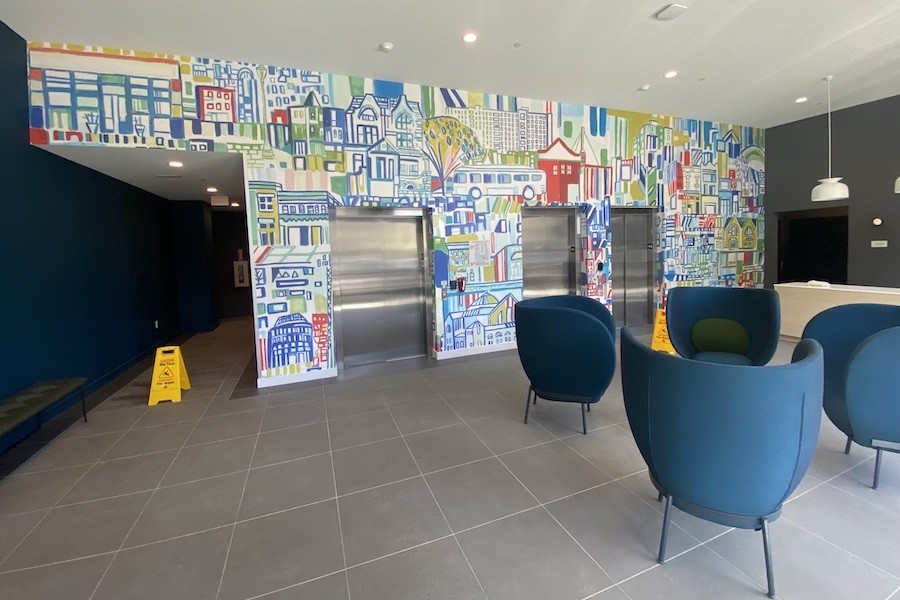 The exterior of the Next LVL may be nothing to write home about, but the interior spaces are quite colorful, beginning with the whimsical mural in the lobby. This photo and all photos marked with asterisks: Sandy Smith; all other photos: Daniel Jackson via Alterra Property Group

Modular construction offers several advantages for both builders and developers. Builders get better quality control using factory-built boxes, and the fact that they’re produced indoors cuts down on weather-related delays. Developers realize significant time savings by being able to simply stack the finished boxes, which come with electric and plumbing conduits in place, one on top of another.

Alterra Property Group’s experience with its first sizable modular apartment building, LVL University City (now SOLO on Chestnut), was so satisfying that even before that building opened its doors, the company decided it wanted to do it again.

This time, though, they also put in more apartments and more goodies for their occupants.

Next LVL, designed by JKRP Architects and located one block west of the original, doesn’t look all that different from its predecessor on the outside. It’s taller — seven stories versus six — and has about three times the street frontage along Chestnut in order to accommodate its U-shaped floorplate. In terms of style and design, however, the differences are at the margins. 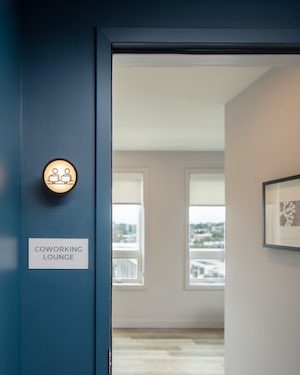 It’s on the inside where Alterra really upped its game. This mixed residential-retail project makes more use of color in its interior spaces and offers more (and more attractive) amenity spaces than its predecessor.

The color hits you the moment you walk into the lobby. There, a mural by local artist Miriam Singer, “43rd & Chestnut Street Day Dreams,” offers a whimsical view of the building’s neighborhood, including the building itself while it was under construction. The mural is one of several original commissioned works of art gracing Next LVL’s public and community spaces. 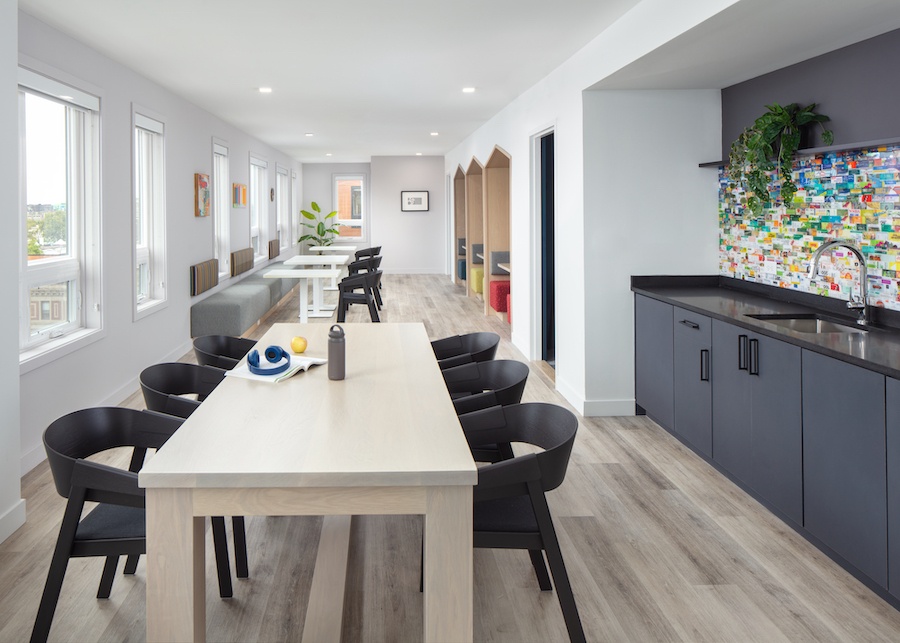 The two main lounges are likewise larger and more colorful. The co-working lounge has booths for conferencing as well as tables and a kitchen counter. 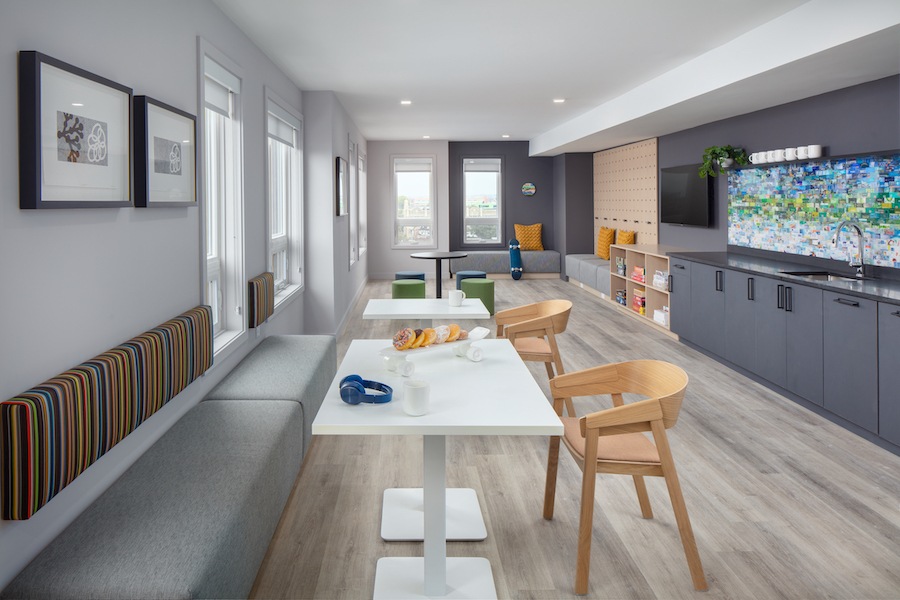 The activity lounge also has a kitchen counter as well as a big-screen TV and games. 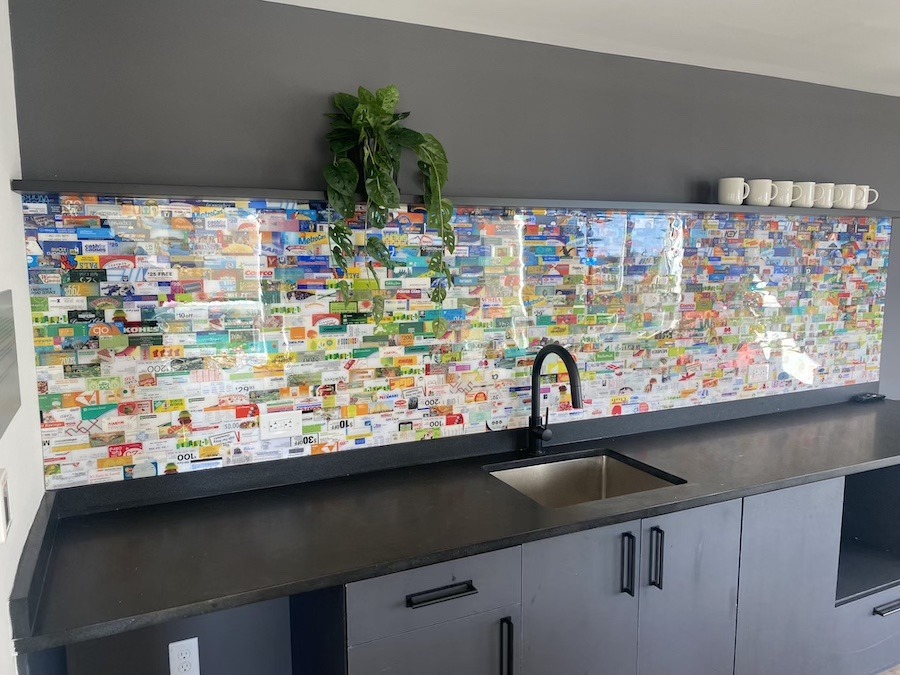 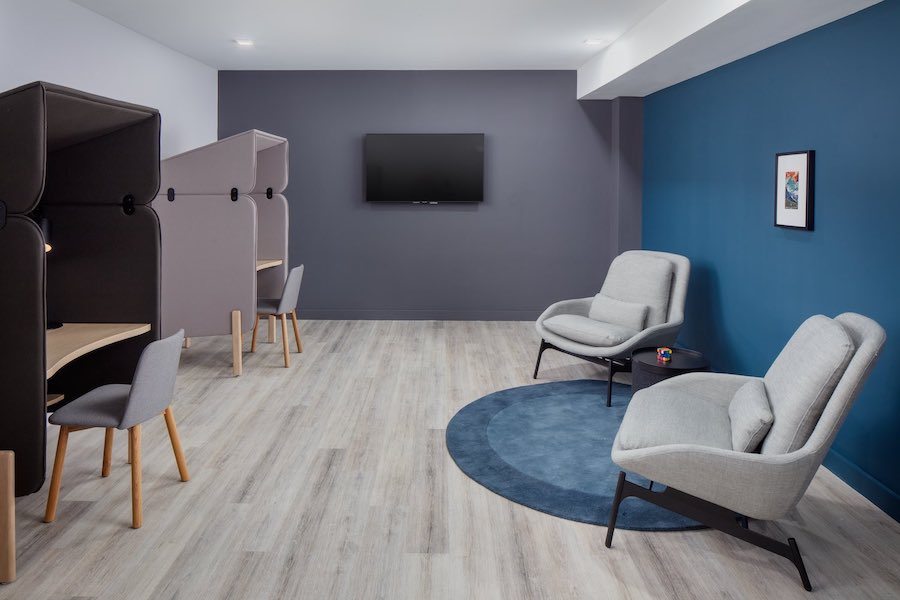 There are also conference rooms and smaller lounges for specific purposes on every floor. One floor has a study lounge. 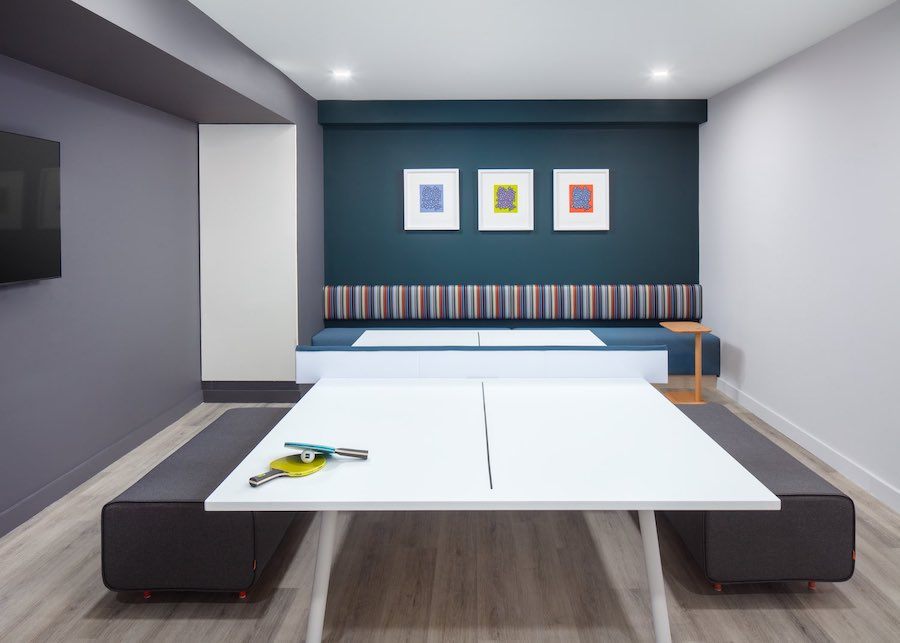 Another has a ping-pong table. The net is removable, enabling the table to be used in other ways. It also has a big-screen TV that makes it usable as a screening or meeting room. 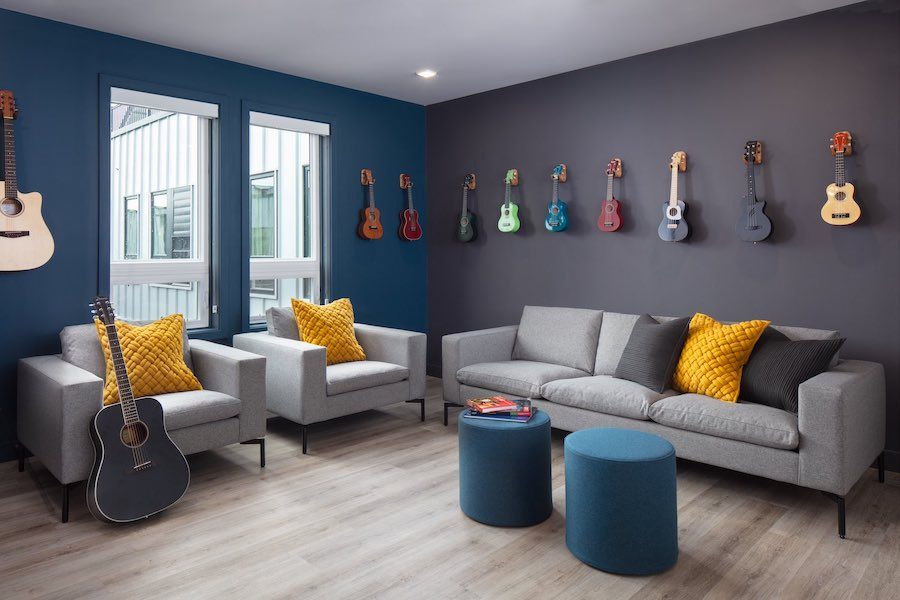 A third has a lounge decorated with musical instruments and artwork celebrating song. 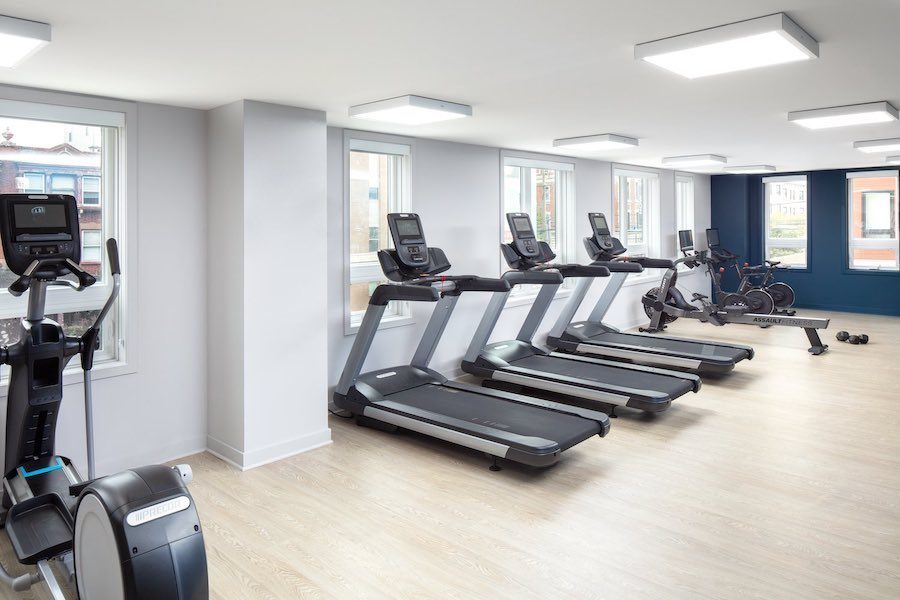 In addition to these spaces, the building has a fitness center; its equipment was spaced further apart than had originally been planned after the COVID pandemic hit.

It also has a larger and better-outfitted roof deck that was awaiting installation of its big-screen TV and grills when I visited the building last month. The green roof also has a dog run. 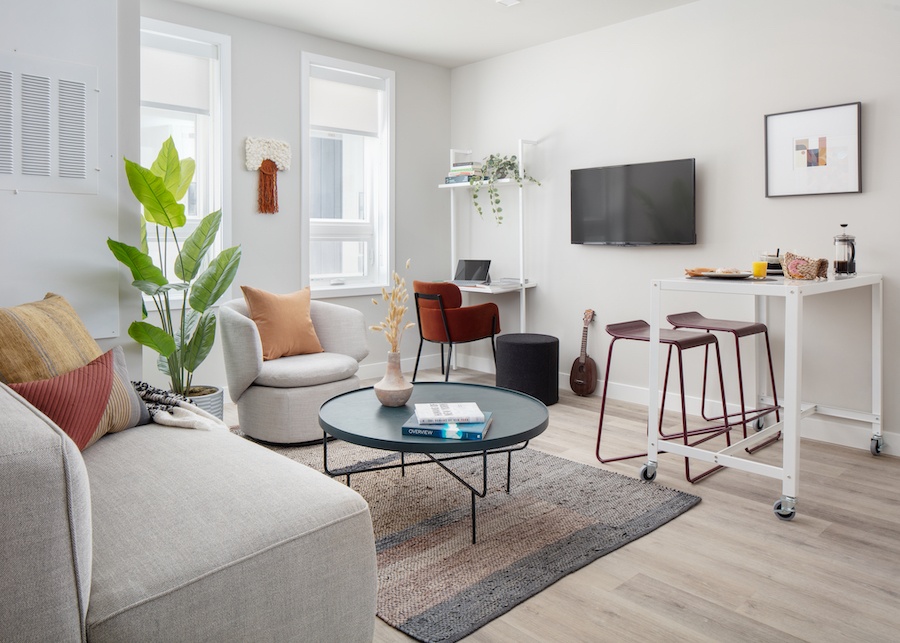 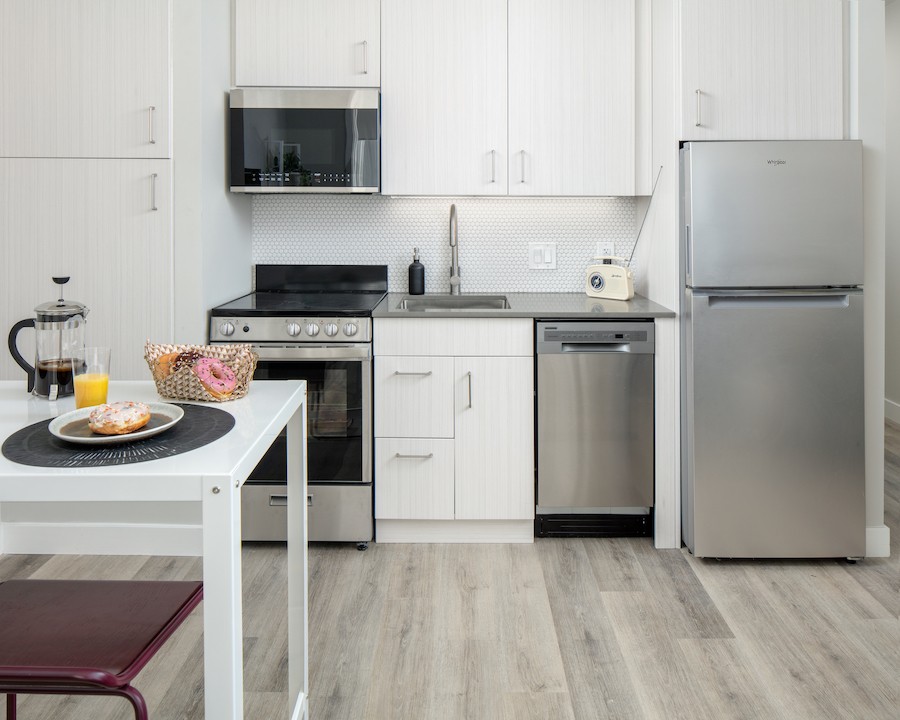 The apartments themselves are efficiently laid out, with open main living areas and bedrooms with storage cabinets, shelves and pegboards surrounding the head of the bed. Large windows let in lots of light. 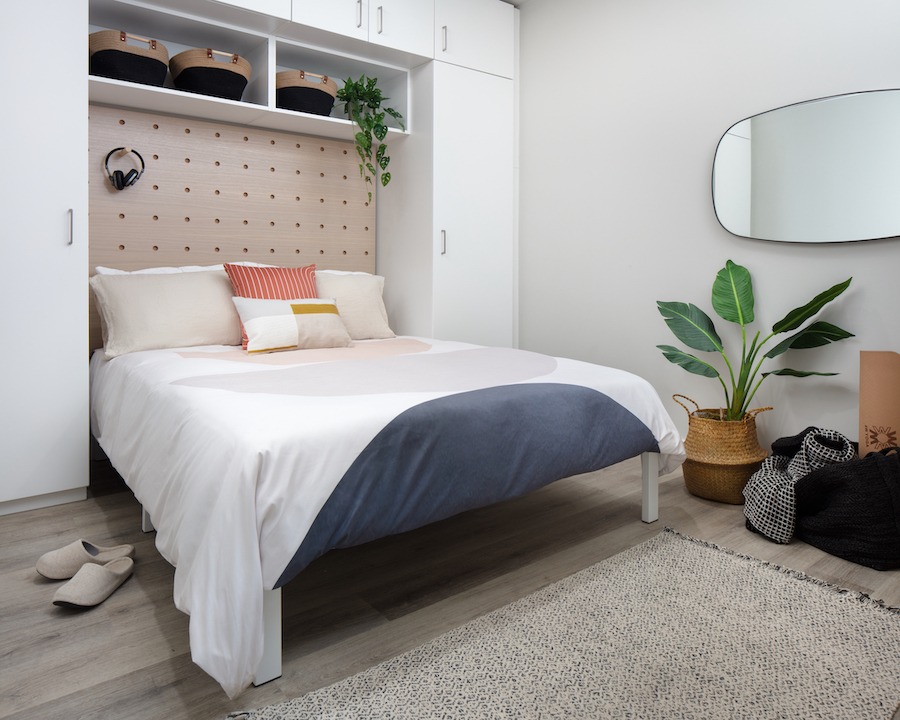 Everything but the appliances came installed in the apartment modules, and the apartments all have smart home technology. 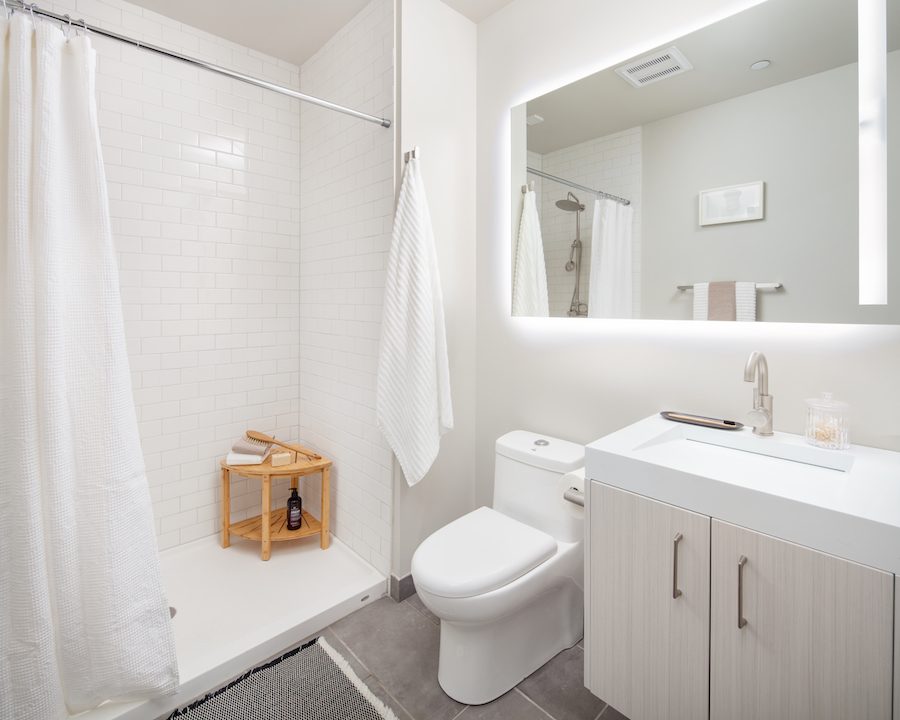 Even though the target market for this building, like the original, is the college students and recent graduates in the area, the apartments come in configurations that accommodate families as well. “We have a good mix of a lot of different demographics in this building,” says Marketing Director Leah McVay.

And what they get are attractive, efficiently laid-out apartments in a building that’s convenient to campuses, hospitals and transit and that’s solidly built. Make that assembled.

And Alterra has plans to assemble more new apartment buildings. “The Next LVL is the second modular construction property that we’ve developed as part of the LVL series,” Alterra Property Group Co-Founder and Managing Partner Leo Addimando said in an August news release announcing the building’s opening. “We look forward to continuing to build upon this concept, allowing us to provide future residents with unmatched quality, comfort and design.”

Where they plan to continue is on North Broad Street, where Alterra plans to top itself again with a 410-unit modular building called LVL North at Broad and Spring Garden streets. When finished, that building will surpass this one as the largest modular apartment building in Philadelphia.

Next LVL by the Numbers

Number of parking spaces: 56 (all taken), plus six more spaces for customers of the Fine Wine & Good Spirits store that will be the building’s retail tenant

Pet policy: Cats and dogs welcome with $350 pet fee at move-in plus $25 rent per pet per month

Rents: Rents range from $1,265 per month for studio apartments to $3,460 per month for the three-bedroom units. When they become available, parking spaces rent for $300 per month.