On the Market in the Poconos: Creekside Colonial in Milford

Milford should expand its historic district to take in this handsome, updated wood-frame Colonial built in 1850 right next to Vandermark Creek. 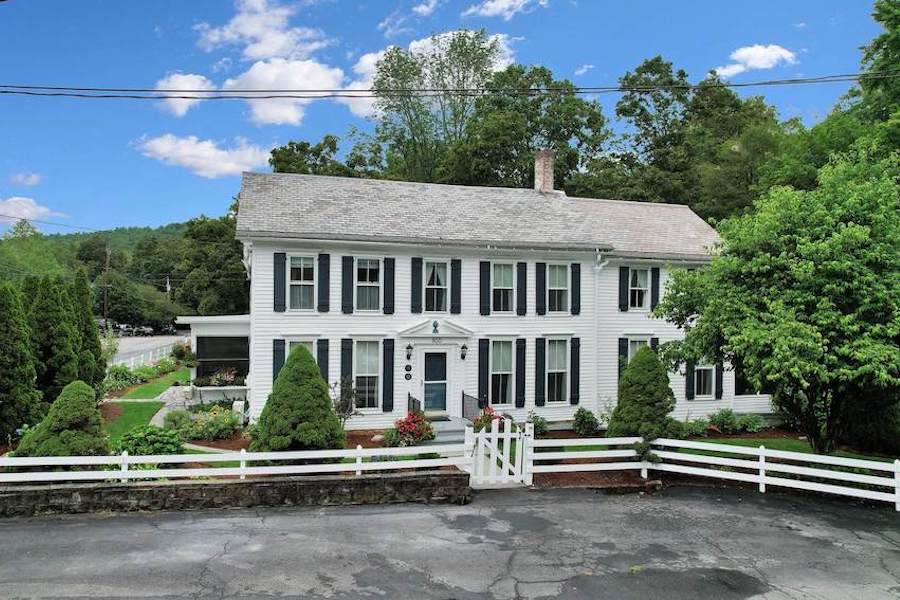 This handsome Colonial on Milford’s main drag looks much as it did when it was built in 1850 on the outside. On the inside, it also retains its original charm, but it has gotten some crucial recent upgrades. You’ll find it at 800 Broad St., Milford, PA 18337 | Pike Wayne Association of Realtors MLS images via Keller Williams Real Estate – Stroudsburg

Milford is, if not the oldest, then one of the oldest British settlements in the Poconos. It was laid out in 1796 by Judge John Biddis, one of Pennsylvania’s first four circuit judges, and it is named for his ancestral home in Wales.

Biddis laid the town out on a grid identical to Philadelphia’s, right down to making Broad Street its principal east-west axis and High Street its north-south one. (Actually, since Milford’s grid lies 45 degrees off the north-south axis, Broad Street runs northeast-southwest and High northwest-southeast.) All of Milford’s important civic buildings, including the first and second Pike County Court Houses, line the public square where Broad and High streets meet.

This Milford Colonial house for sale sits four blocks east of the intersection of Broad and High streets. Built in 1850 and expanded over the years, this picture-postcard-pretty house sits on the banks of Vandermark Creek, which roughly defines the borough’s northeastern boundary. In a 1793 prospectus, Biddis promoted this stream along with Sawkill Creek, which forms Milford’s southwestern boundary, as “well known for their regular supplies of water and must have their influence for almost every manufacturing purpose.” 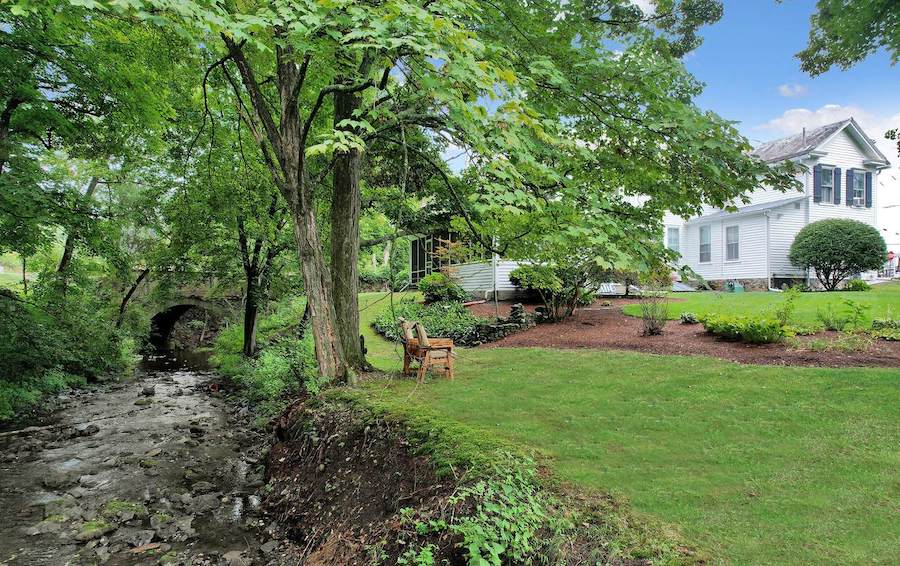 Vandermark Creek flowing past the back and side yards

If any mills were built along Vandermark Creek, evidence of their existence seems to have vanished. But this house abides, and the creek makes an attractive and relaxing complement to its beautifully landscaped back and side yards. 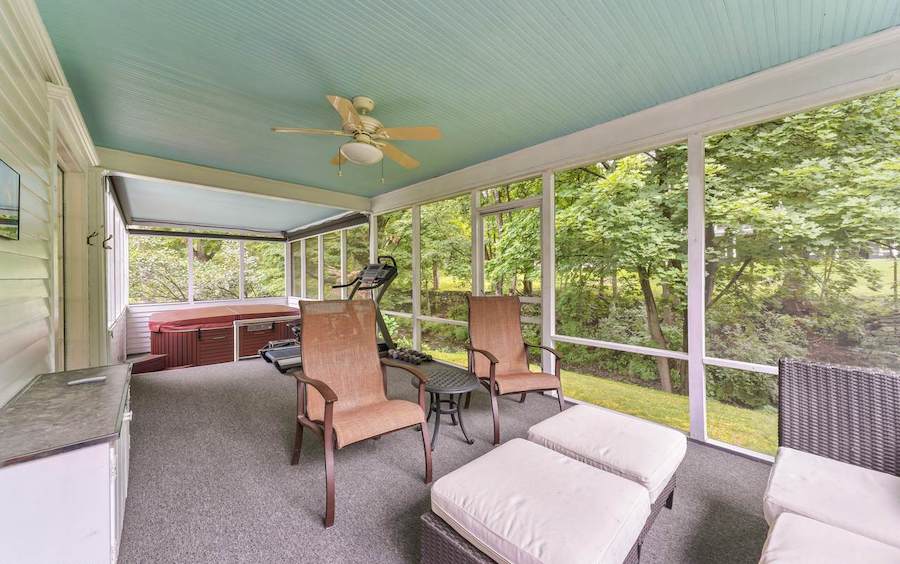 You can also take in views of the creek from the screened porch beyond the family room on the main floor. Here you will also find a hot tub spa. 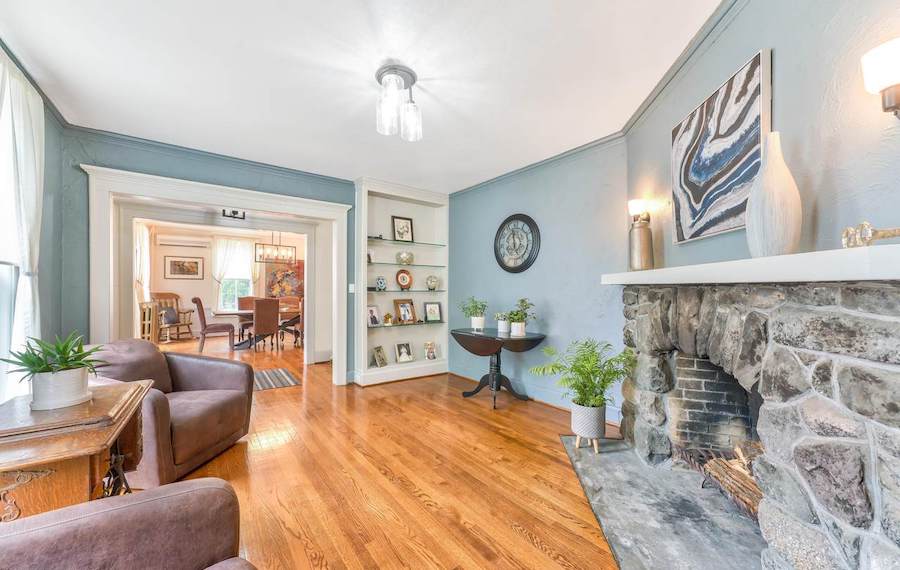 The rest of the house is as well maintained as its grounds, and it has had a number of recent updates. Its living room has a handsome stone fireplace. 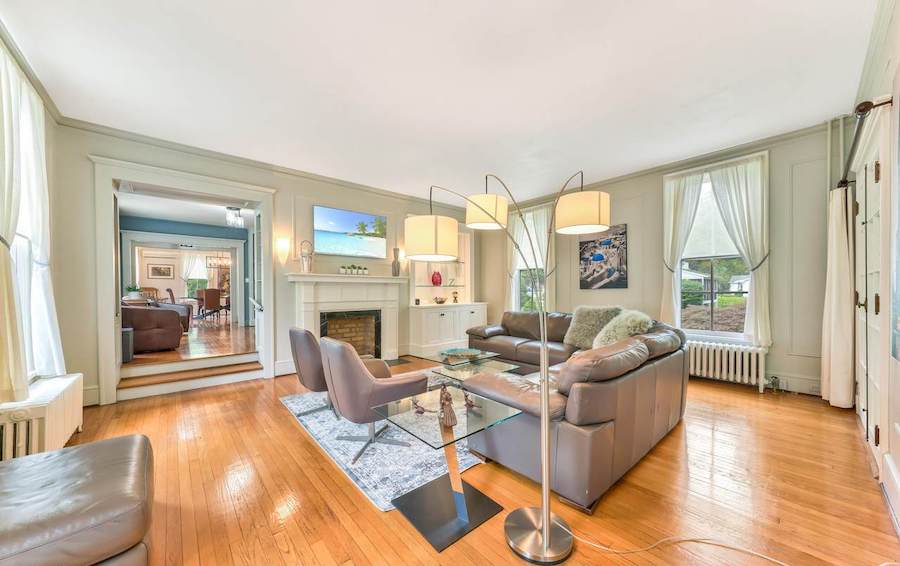 The sunken family room between the living room and the side porch also has a fireplace, and both the living and family rooms have built-in display shelves. 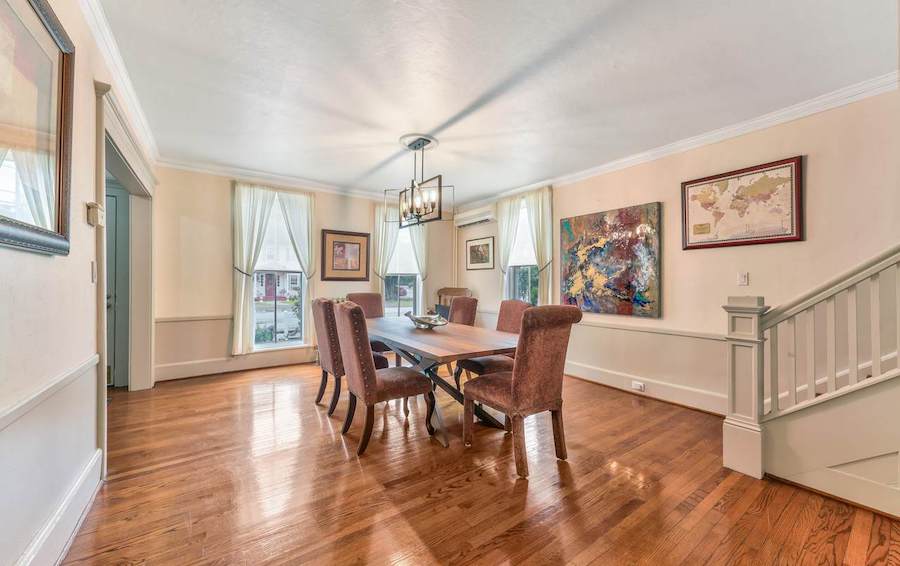 The dining room, across the foyer from the living room, has a neotraditional chandelier and enough space to accommodate a dining table larger than the one you see here. It also contains the stairs to the second floor. 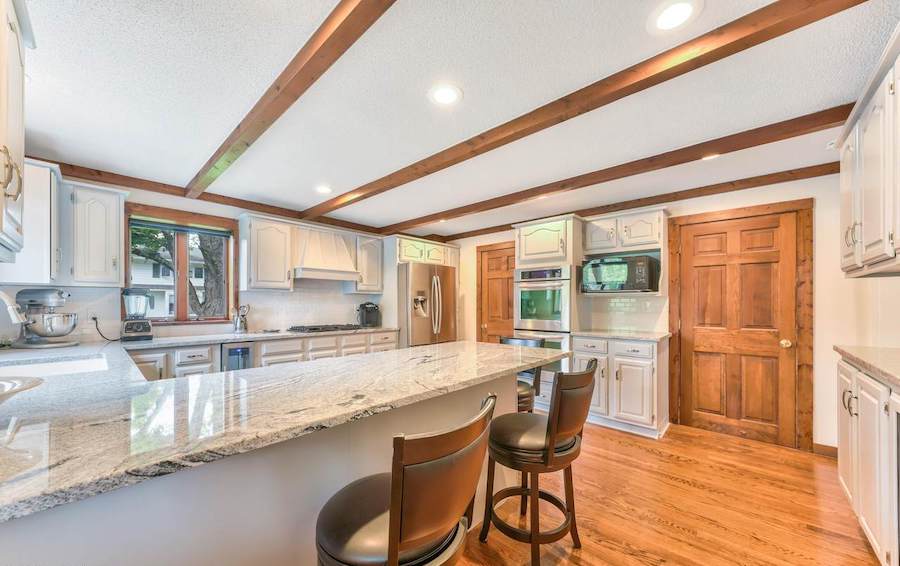 The newly remodeled kitchen has plenty of cabinet space, including glass-fronted china cabinets. It also has lots of granite counter space, all-new stainless-steel appliances, a wine fridge and a walk-in pantry. You will also find a guest or in-law suite and the laundry room on the main floor. 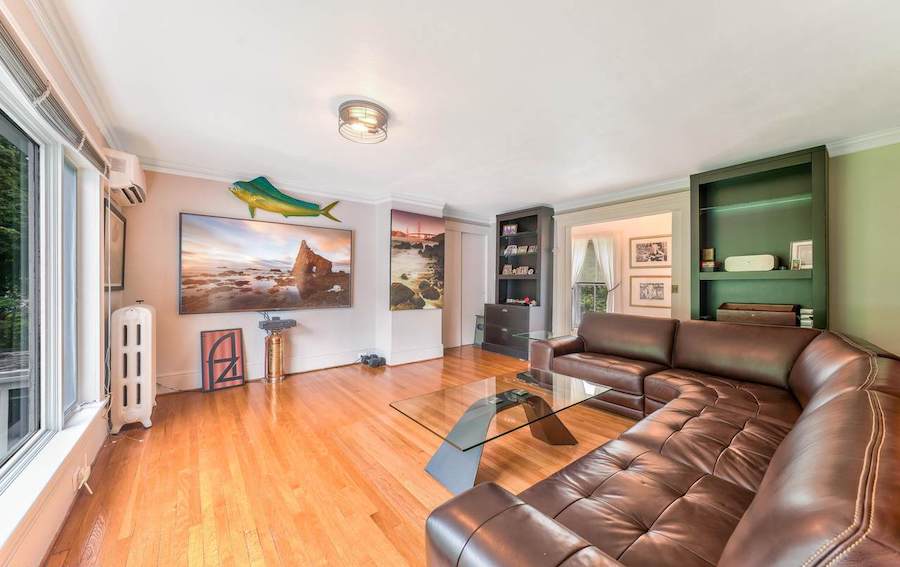 The second floor contains the other three bedrooms. In the center of the floor is a large sitting room that got a picture window overlooking the backyard added to it. 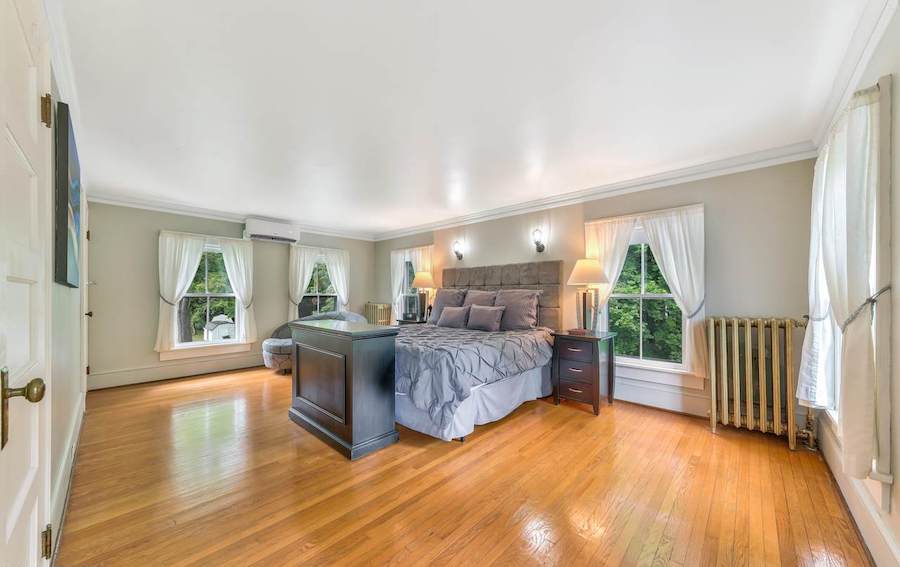 Beyond it lies the primary bedroom, located over the main-floor family room. It’s as spacious as the family room, and its hardwood floor sparkles. 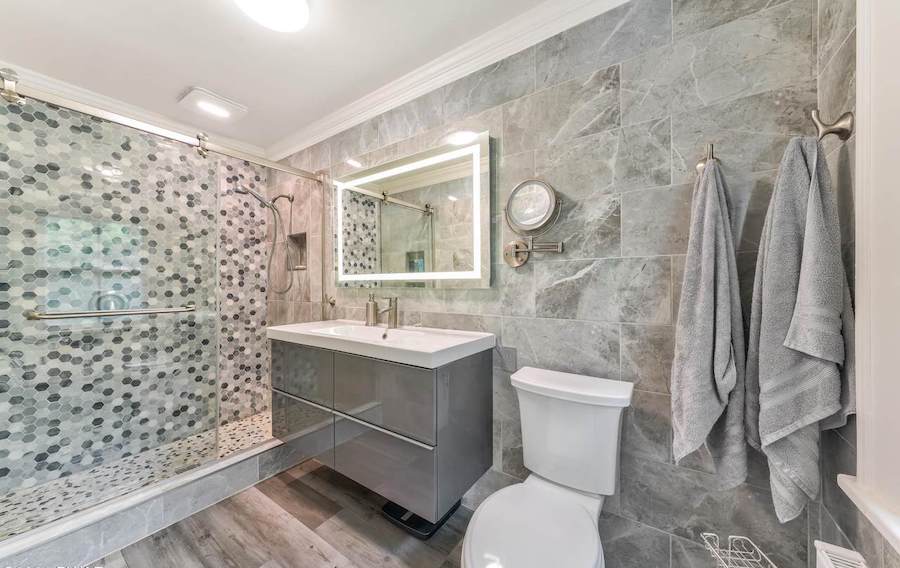 Its bathroom also got a recent update that gave it a modern vanity, a backlit mirror and a large walk-in shower. 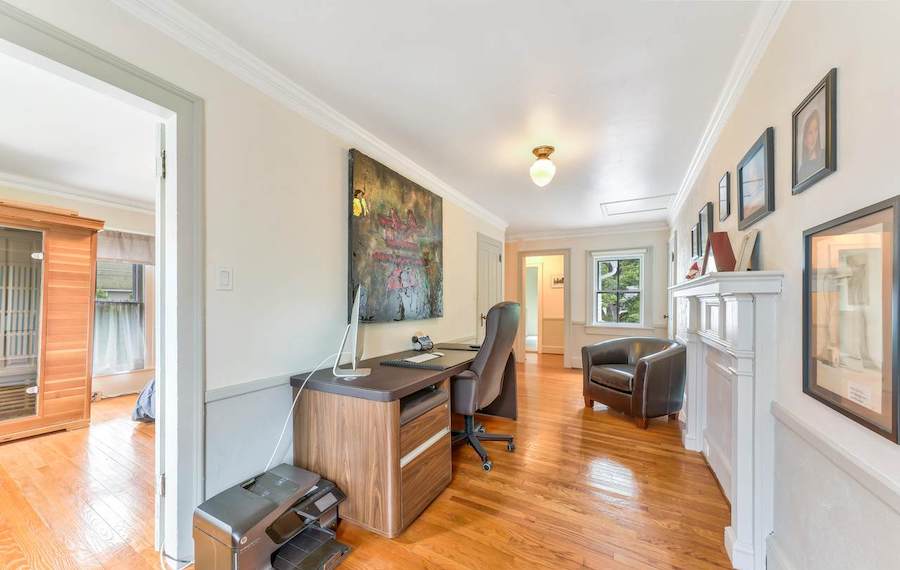 The middle-sized bedroom has a sauna, which you can see from this photo of the second-floor center hallway. It currently serves as home office space. 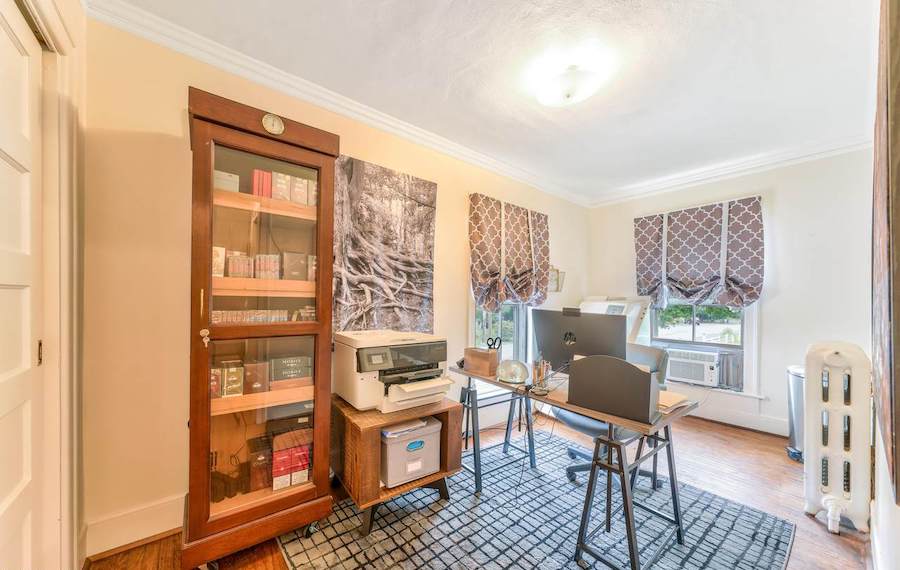 So does the small bedroom at the back.

The unfinished walkout basement has several rooms that serve as workshop and storage space. 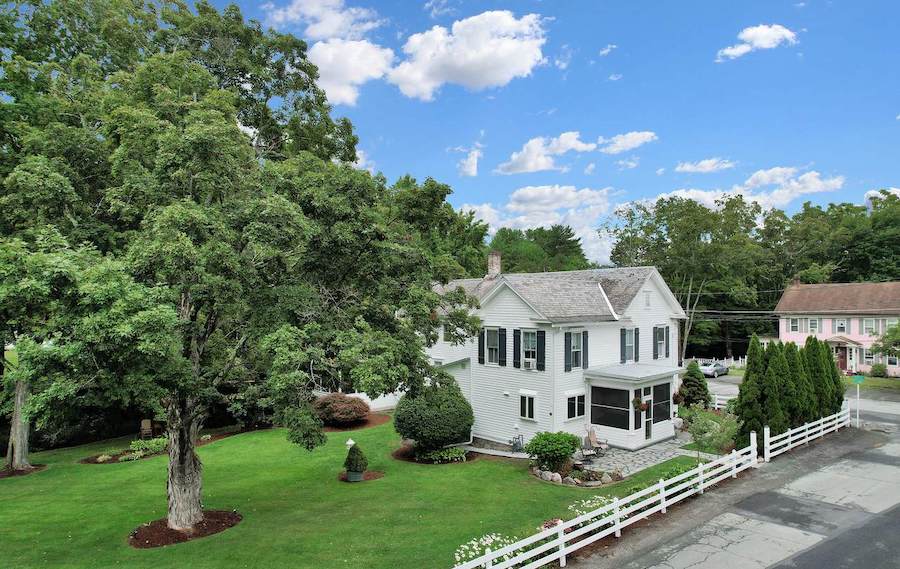 Back and side yards and side patio

And the grounds have a variety of environments, including a flagstone patio and a perennial flower garden.

Milford being a compact borough, almost everything that draws visitors to it is within waking distance from this house. That includes its prized historic district and Forester’s Hall, where the conservation movement was born under the watchful eye of Milford resident and Pennsylvania Governor Gifford Pinchot.

But this being a small town, and the Poconos being a large territory, you will no doubt want to keep a car here. You can refuel it at the Shell station diagonally across the intersection of Broad and Sarah streets from this house.

Even though this Milford Colonial house for sale is not part of the Milford Historic District, it is part of the borough’s rich history, and its owners have maintained it accordingly. Now it’s your turn to carry the torch.