On the Market: Colonial Farmhouse in Blue Bell

There’s a conspiracy going on here: the builder and the owner together have channeled the 18th century faithfully. 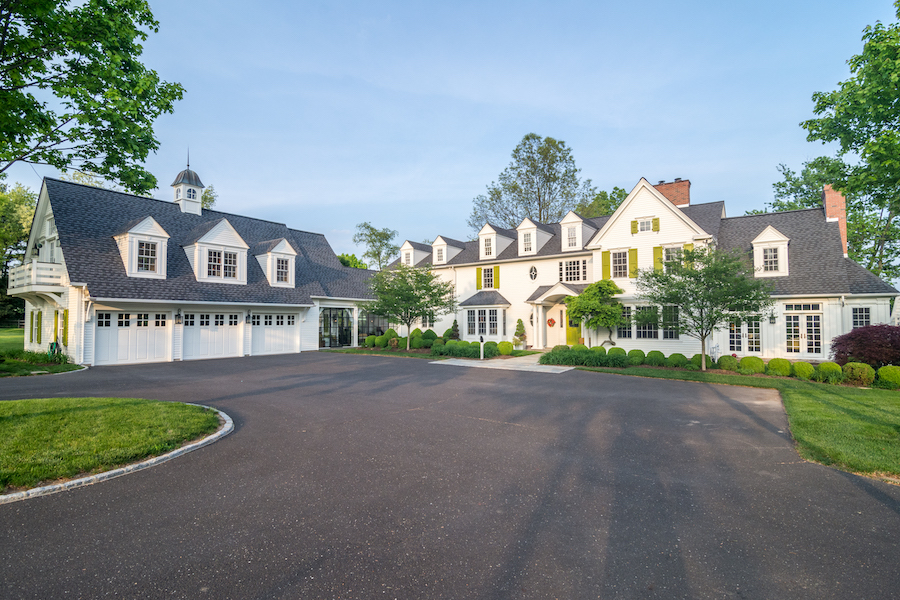 You can find many newer Colonial farmhouses that look like this one, but very few that sweat the details as well as this one at 149 Stenton Ave., Blue Bell, Pa. 19422 does. | Photos: Scott Krycia via BHHS Fox & Roach Realtors and *Bright MLS

I’m sure you’ve heard that refrain before. Newer houses may have the surface appearance of the older ones they mimic, but their beauty is only skin deep, and their quality often not up to par with that of years gone by.

I am pleased to offer you an exception to the rule today. This Blue Bell Colonial farmhouse for sale has the soul of an 18th-century farmhouse — and much of its style, trim, detailing and hardware, too. Even better, it has an owner who admires 18th and 19th-century craftsmanship and decorative arts so much, they turned this house into a gallery of early Americana.

Yet, as you will see in the tour of this house, there are a number of places where its more recent provenance breaks through. How recent? I’ll save that for the end.

The first clue that this is not an 18th-century farmhouse, of course, is the house itself. Houses back then didn’t have three-car garages, so the presence of one that’s integral with the house is a dead giveaway. 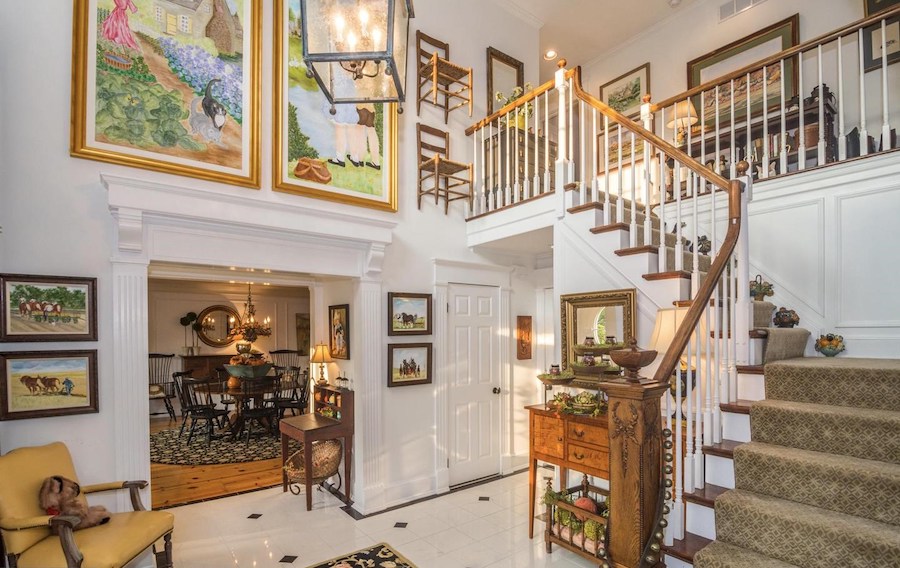 So, for that matter, is the two-story foyer, a feature not found in any but the fanciest center-hall Colonial houses. Here, however, it serves as a bang-up display space for colonial and early American arts and crafts. It also features a marble floor and an oval window with built-in seating in the alcove to its left, on the way to the dining room. 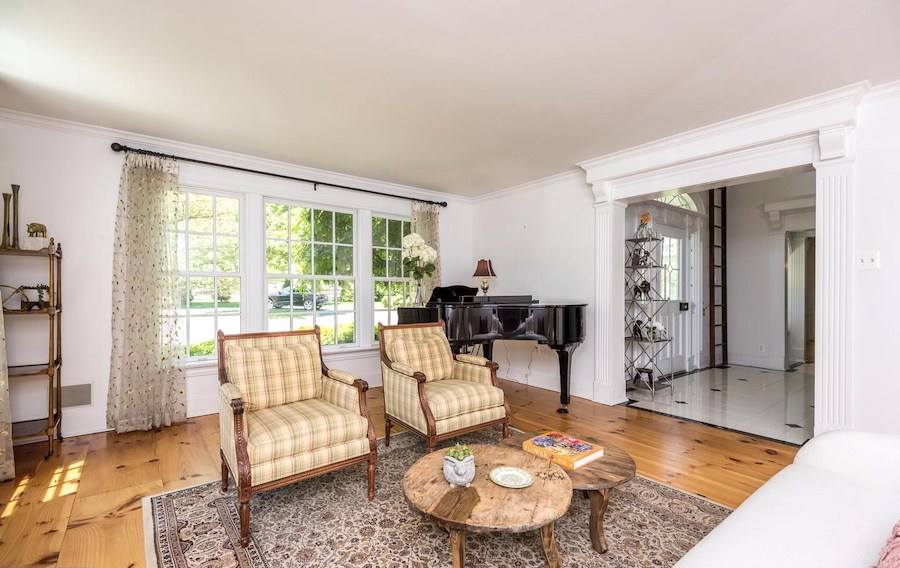 The living room, to the right of the foyer, has a little less channeling going on. But it does have a reclaimed wide-plank pine floor, something you will notice in several other rooms in this house, and a fireplace that it shares with the breakfast room behind it. We’ll get to that room in a minute… 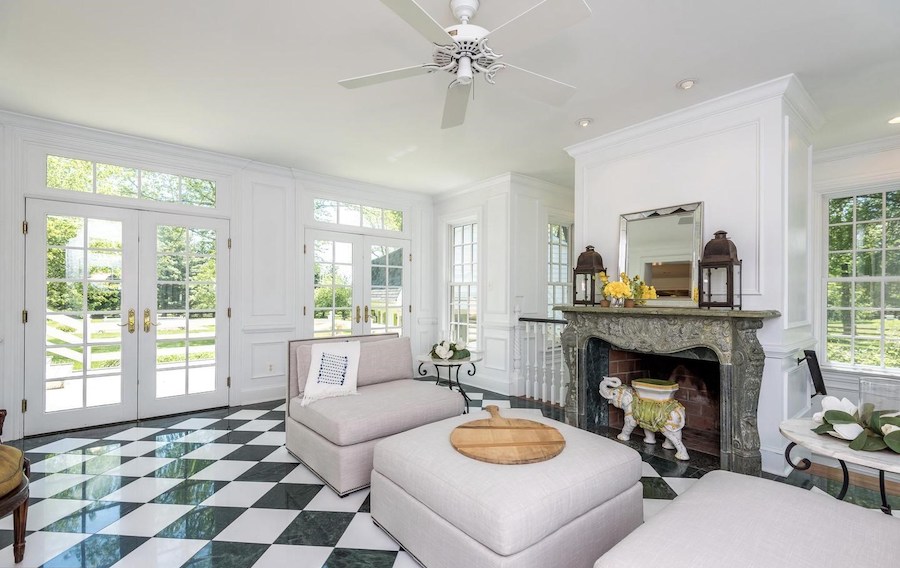 …but first, let’s look at the sunroom, an updated version of an 18th-century conservatory. It too has a fireplace; it also has two sets of French doors that open onto the front and back yards respectively. You’ll also find the stairs leading to one of its two basements here; below this sunroom is the home gym. 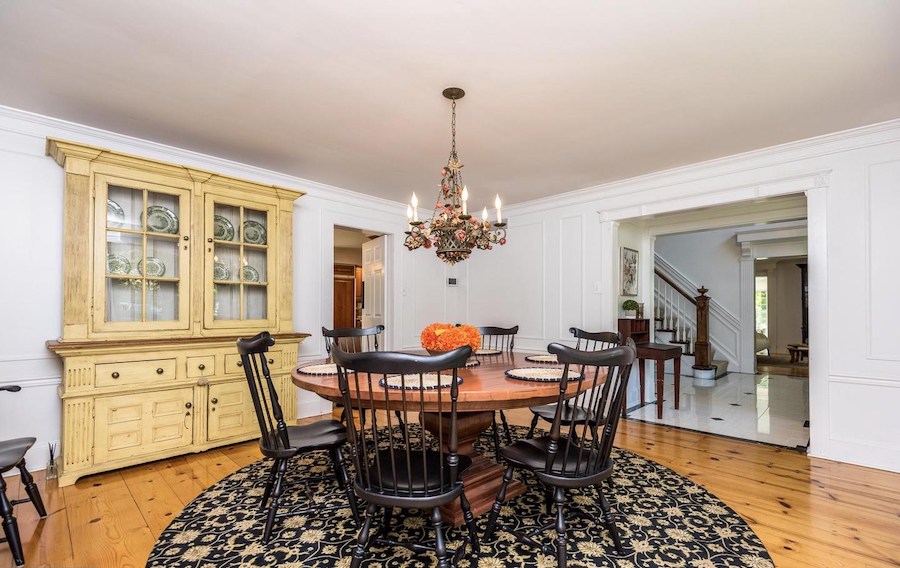 On the other side of the foyer, the channeling resumes full force in the dining room, which the owner has outfitted with a vintage china cabinet. The builder did their part with floor, the trim and the more elaborate crown molding over its bay window, which includes a banquette. 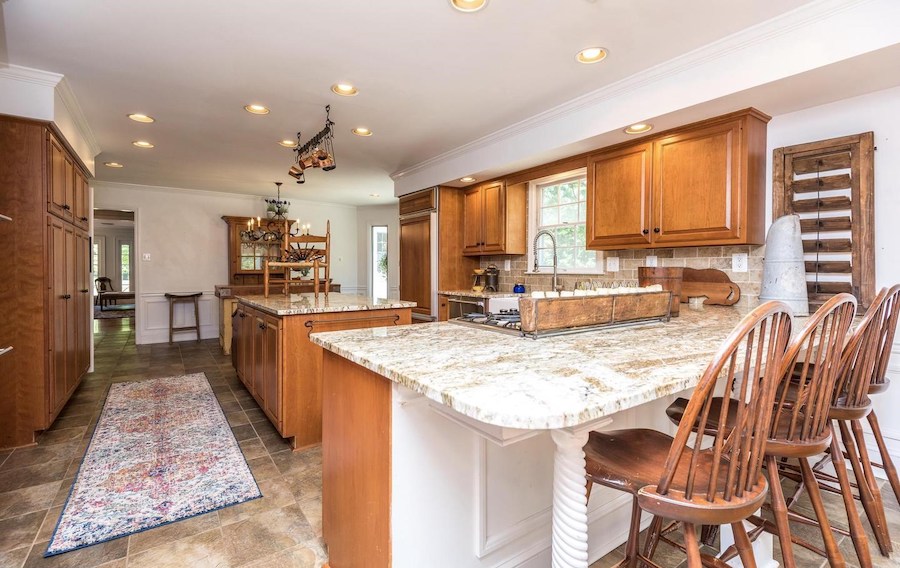 The kitchen and breakfast room span the width of the three rooms in front and can be accessed from the dining room, foyer and sunroom.

Of course, no one nowadays wants to cook the way they did in colonial America, so naturally, the kitchen has all the modern high-end appliances one would expect to find in a house such as this Blue Bell Colonial farmhouse for sale. 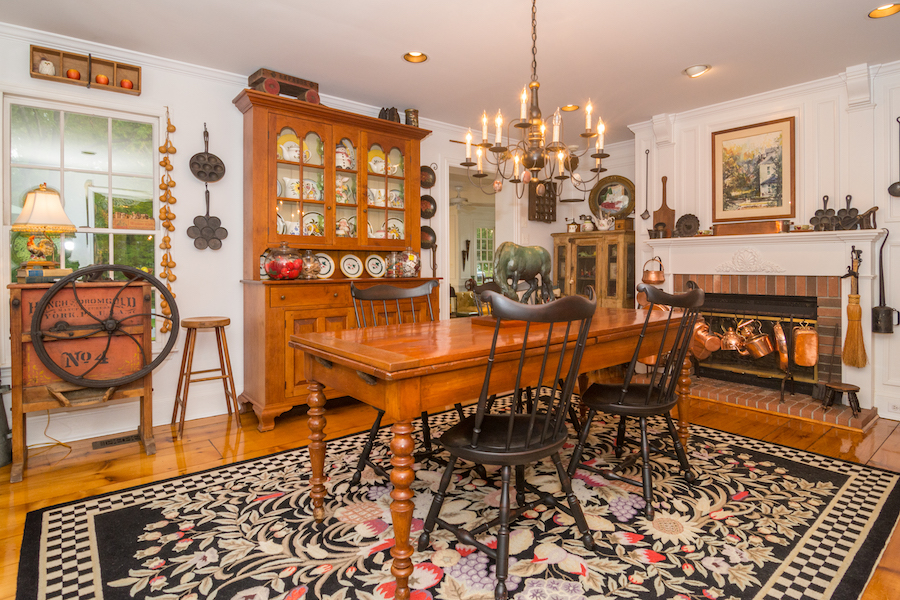 And it also lacks the hearth fireplace and beehive oven one would have found in an 18th-century estate farmhouse kitchen. But its breakfast room does have a brick fireplace, shared with the living room. 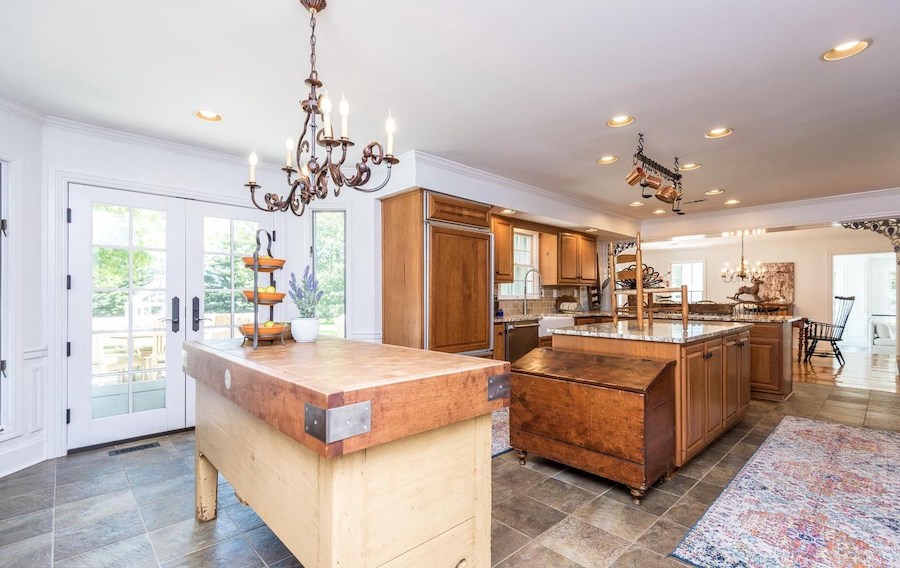 And you will find an antique butcher-block table at the far end of the kitchen, next to the bay French doors leading out to the rear deck. (Not to mention a vintage chandelier hanging over it. You may have also noticed similar vintage lighting in the foyer, dining room and breakfast room.) 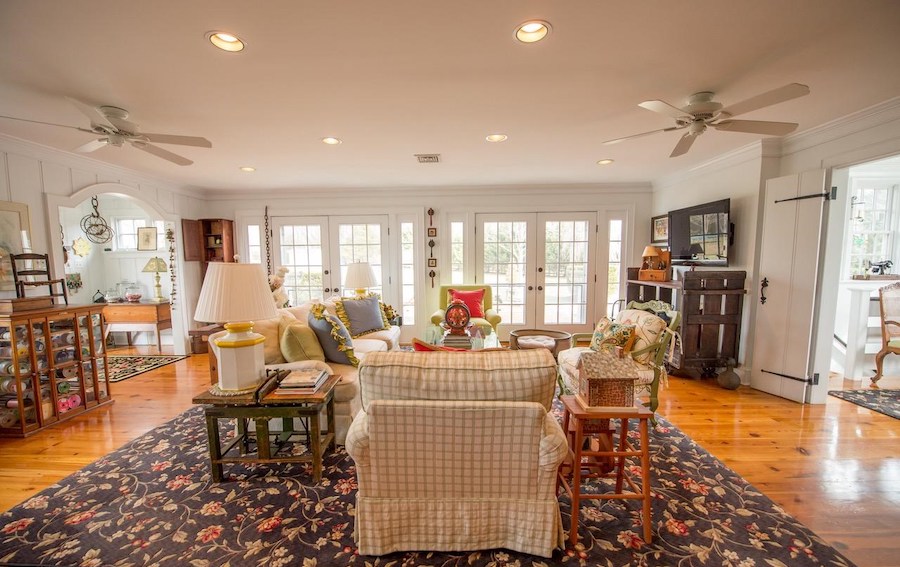 Beyond that end of the kitchen lies the family room, which features its own Sub-Zero refrigerator and two wine fridges. 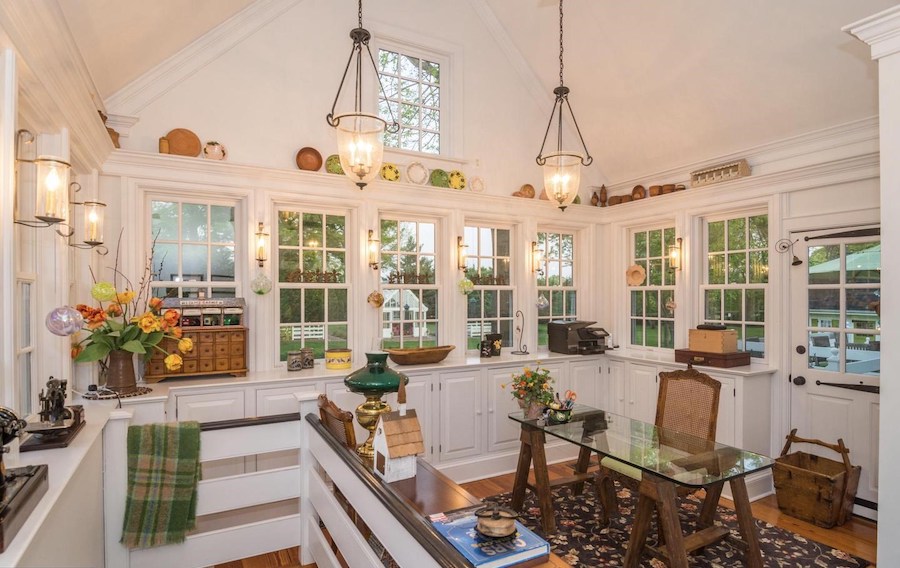 And on the other side of the family room is a home office ringed by windows jutting into the backyard. Stairs inside it lead down to one of this house’s two laundry rooms, and stairs just outside it in the family room lead up to the second-floor recreation room. 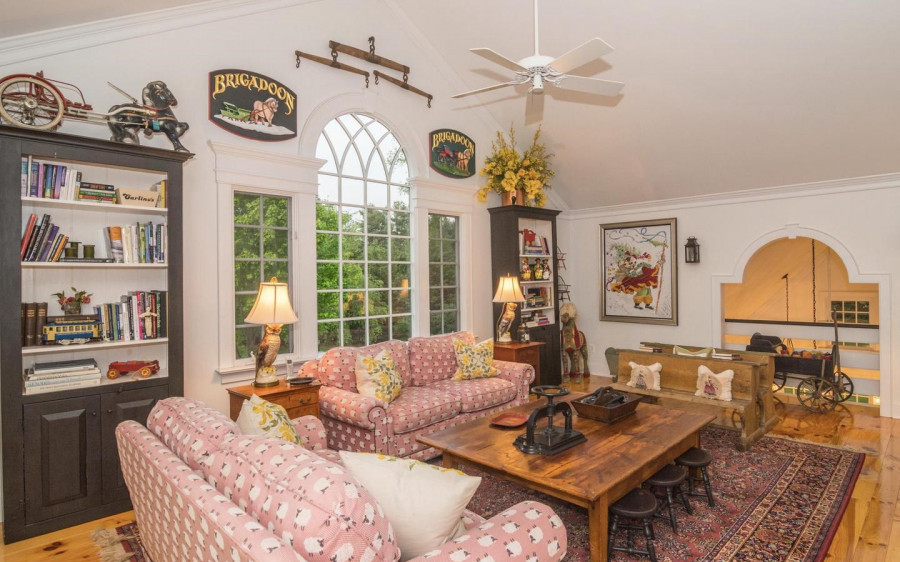 That recreation room boasts a large Palladian window overlooking the backyard and a Juliet balcony opening onto the home office below. 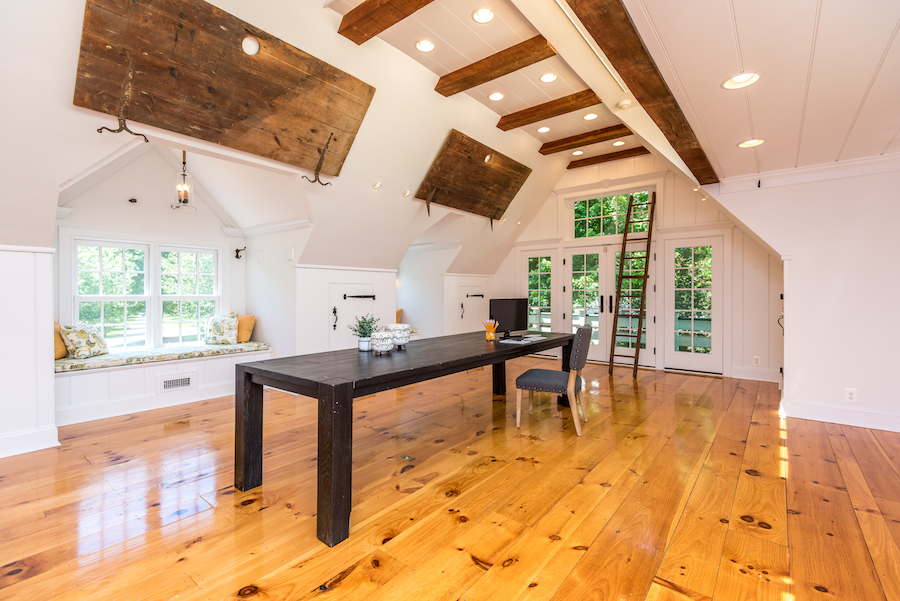 Breezeways connect this room and the home office below to the newer wing containing the garage. Its second floor has an expansive skylit room that currently functions as a second home office but could also serve as a guest suite or studio.

Not only will you find reclaimed wide-plank pine on its floor but also reclaimed wood on its ceiling, in the form of salvaged doors. The ceiling also has exposed cherry wood beams.

The half bath attached to this room features some great reclaimed metalwork in its windows. 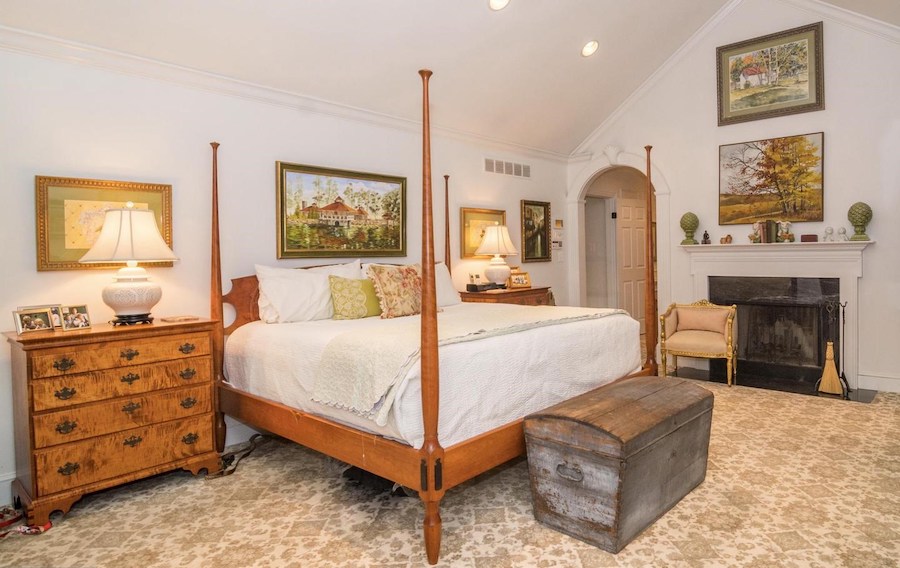 The second and third floors of the main house contain its five bedrooms. The primary bedroom, located over the living room, has a cathedral ceiling and a Juliet balcony overlooking the backyard and rear deck. The primary suite also includes a sitting room and a large walk-in closet. 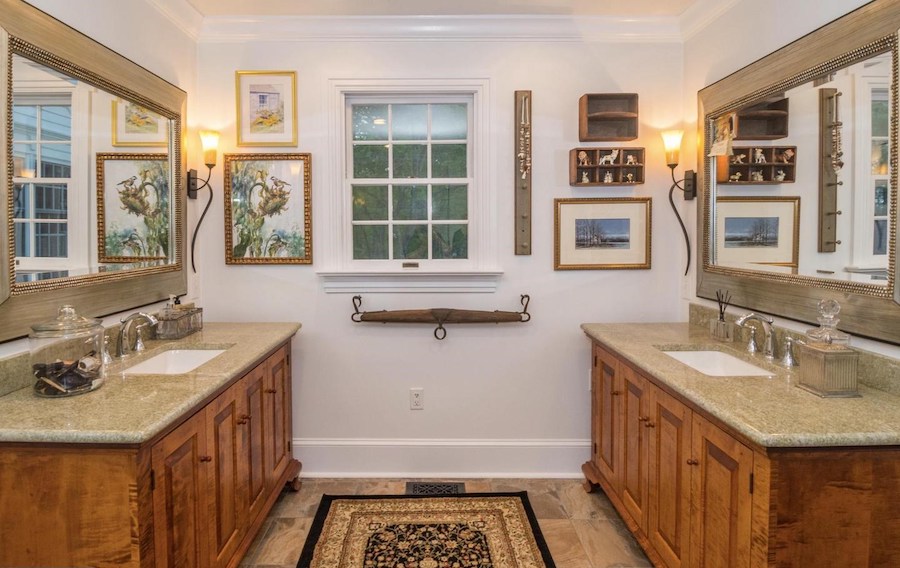 It also has a bathroom with facing dual vanities, a shower stall and a separate toilet closet. 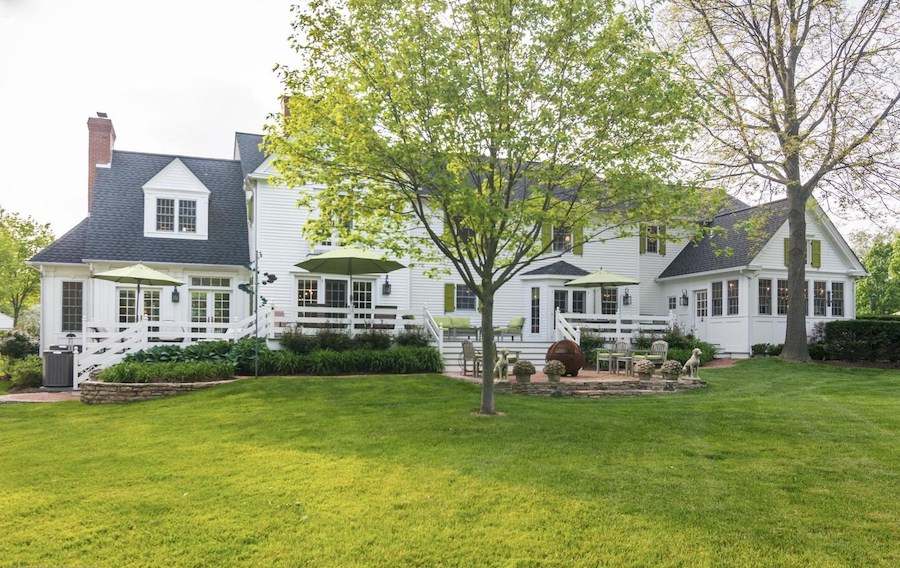 The expansive backyard includes a deck that spans the rear of the house and a brick patio. 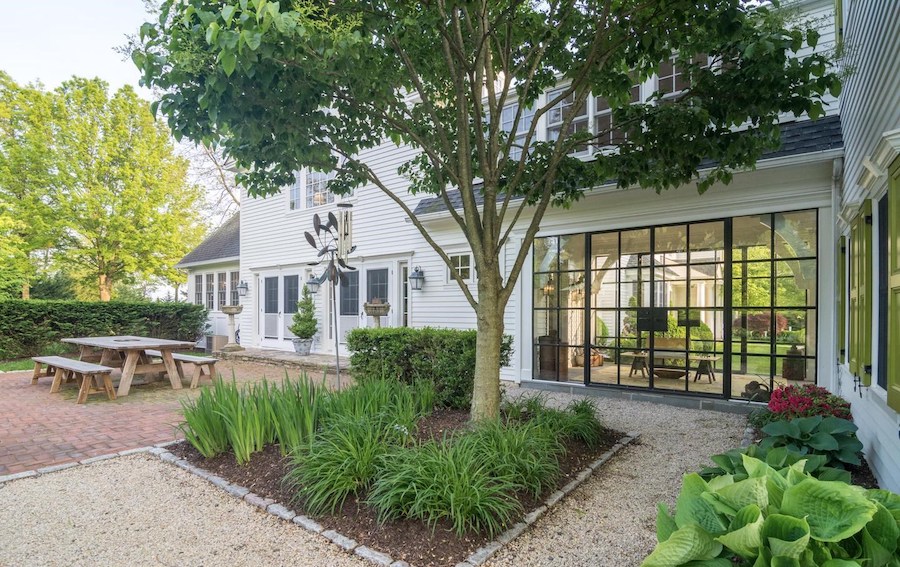 A side patio occupies the space between the family room and the garage wing. 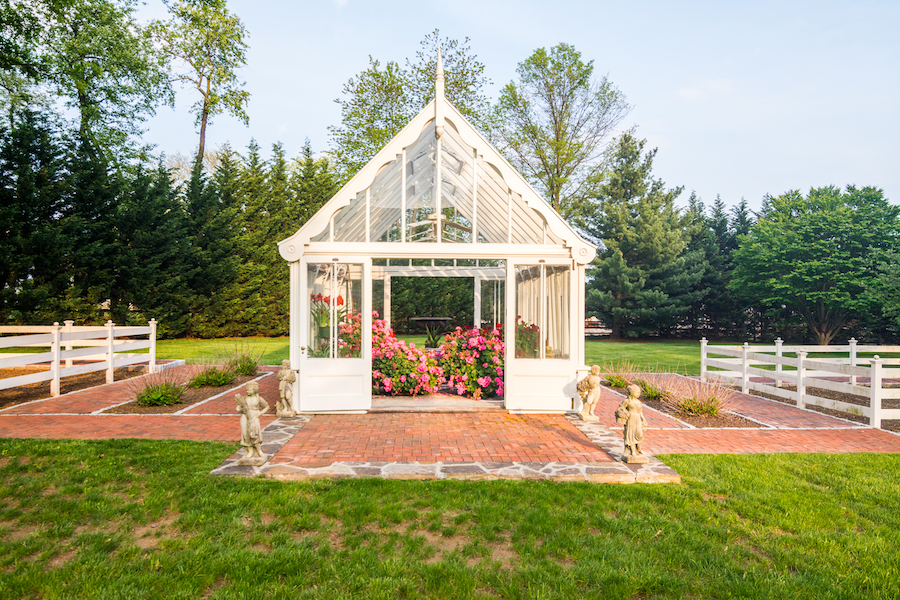 And several charming outbuildings also occupy the backyard. One of them is an imported Victorian greenhouse surrounded by planting beds. You will also find a putting green out this way. 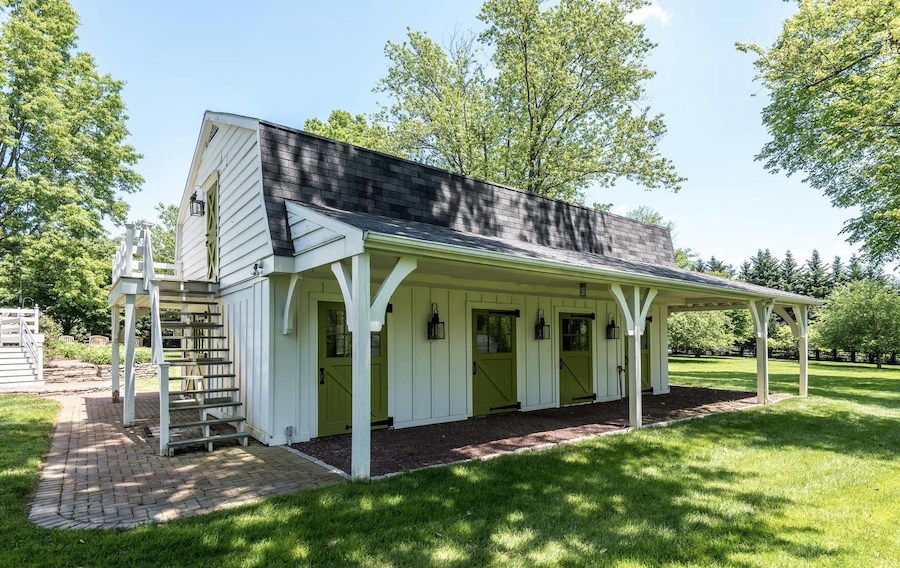 There are also two barns. The larger one has an upstairs space that could be used as a studio or workshop.

All these lovely attributes and amenities should make this house a natural for anyone who truly loves early American architecture and design. If that’s you, you should seize this opportunity to buy a modern house that faithfully captures the soul of the 18th century, give or take a few details. Maybe you could even persuade the owner to sell you some of the many vintage items they collected to go with the house.