Just Listed in the Poconos: Extra-Large Cottage in Pocono Manor

This handsome house is part of a historic resort community dating to the early 20th century. It won't take all that much to bring it into this one. 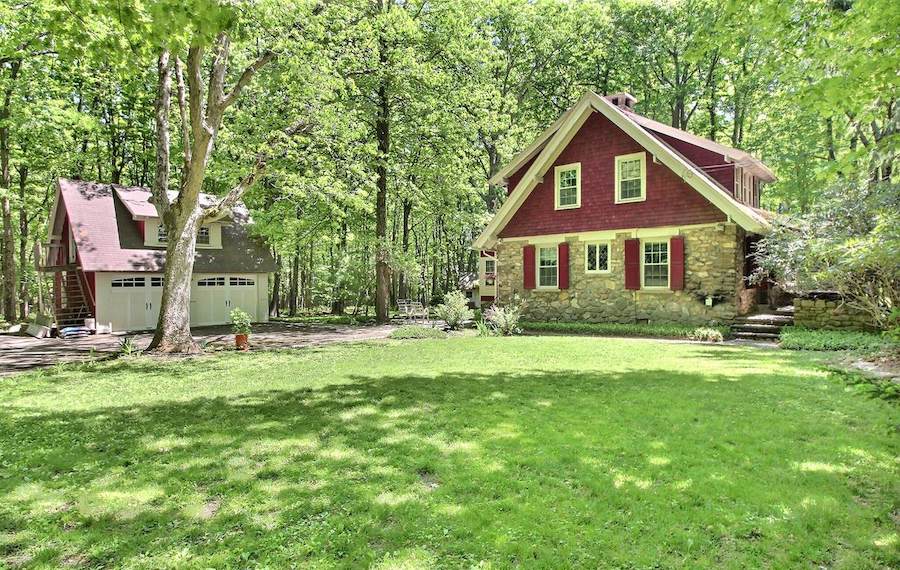 If you’ve been dreaming of a cabin in the woods, why not set your sights a little higher and go for this spacious “cottage” instead? It has the requisite woodsiness, and it offers both more comfortable digs and plenty of recreational opportunities around it. You’ll find it at 399 Manor Dr., Pocono Manor, Pa. 18349 | Pocono Mountains Association of Realtors MLS images via Keller Williams Real Estate — Stroudsburg unless otherwise noted

The first Poconos vacation resorts were established as group getaways: large inns and lodges, many financed by Philadelphia worthies who were looking for a place where they, their families and their friends could get away from the stress and pollution of the city and enjoy fresh air in a rural setting.

From the Centennial onward, inns such as the Mount Airy Lodge, Montanesca and the Pocono Mountain House each welcomed hundreds of visitors to the Poconos each week during peak season. Around 1900, these began to be joined by developments where the hotel was the centerpiece of an entire village built around it.

Buck Hill Falls, established in 1901 by a group of well-to-do Philadelphians, is one of these. Pocono Manor, founded in 1902 by several Philadelphia Quaker families, including the Strawbridges, is another. This Pocono Manor cottage house for sale is part of that community.

This handsome stone-and-shingle house dates to 1916 and sits behind another, larger house across Manor Drive from the clubhouse at the Pocono Manor Golf Club.

According to owner Tim Cutler, this house most likely housed Pocono Manor staff. If so, they had very nice accommodations. 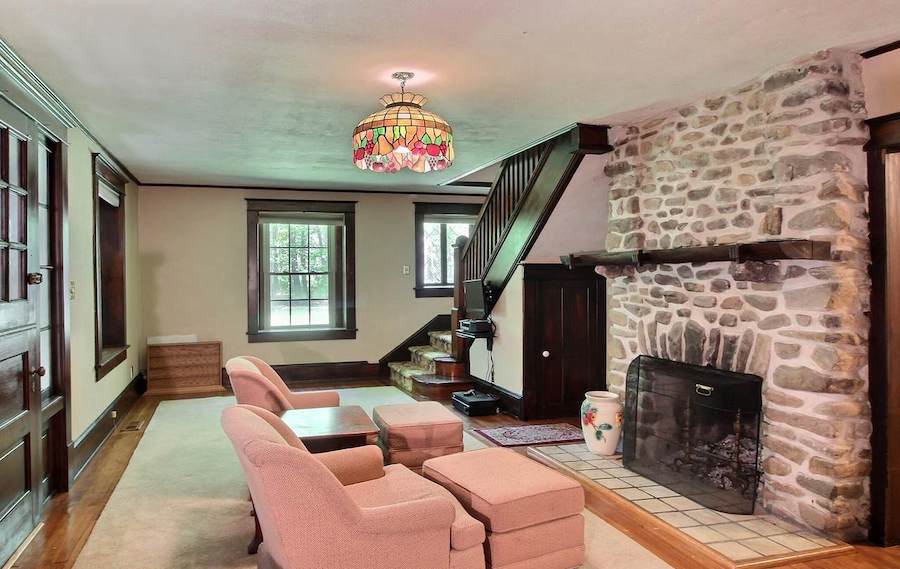 It has a large living room with a stone fireplace. Stairs to the left of the fireplace lead up to the two bedrooms and bathroom on the second floor. 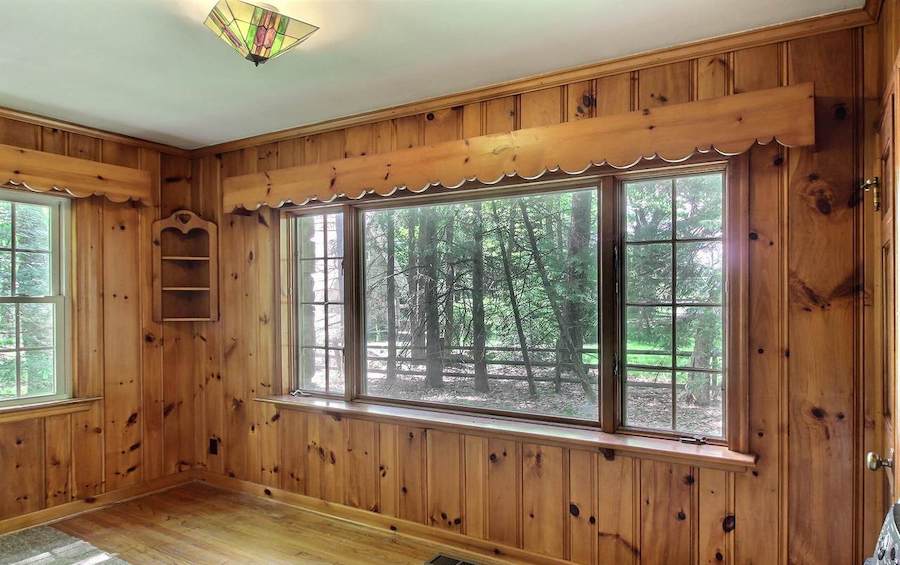 A small hallway connects the living room to the first-floor bathroom and third bedroom. That room, redecorated in knotty pine some years back, also contains the laundry. 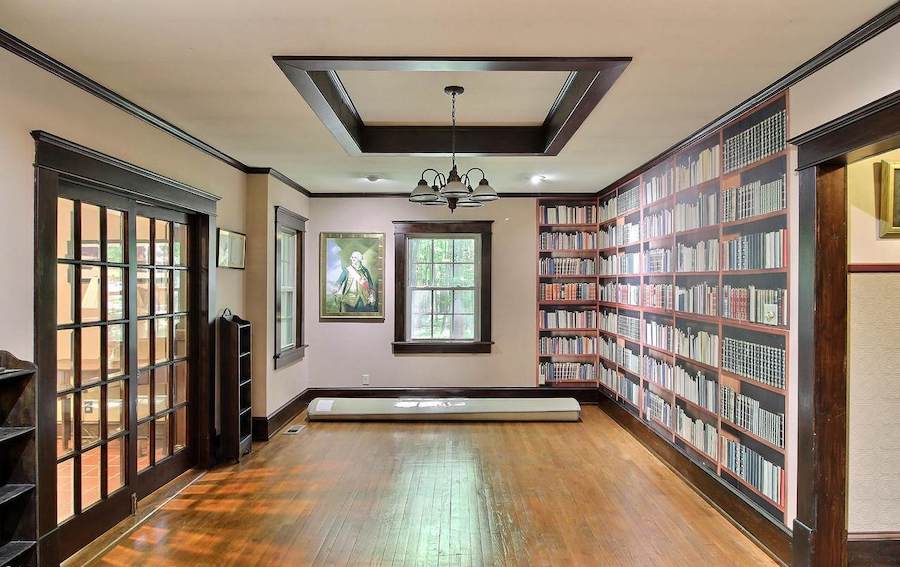 The hallway also connects the living room to the room Cutler calls “the library.“ And it certainly has plenty of books to justify the title. But look closely: That library exists only on paper — wallpaper, that is. The tray ceiling and the room’s location suggest that it would more properly function as a dining room. 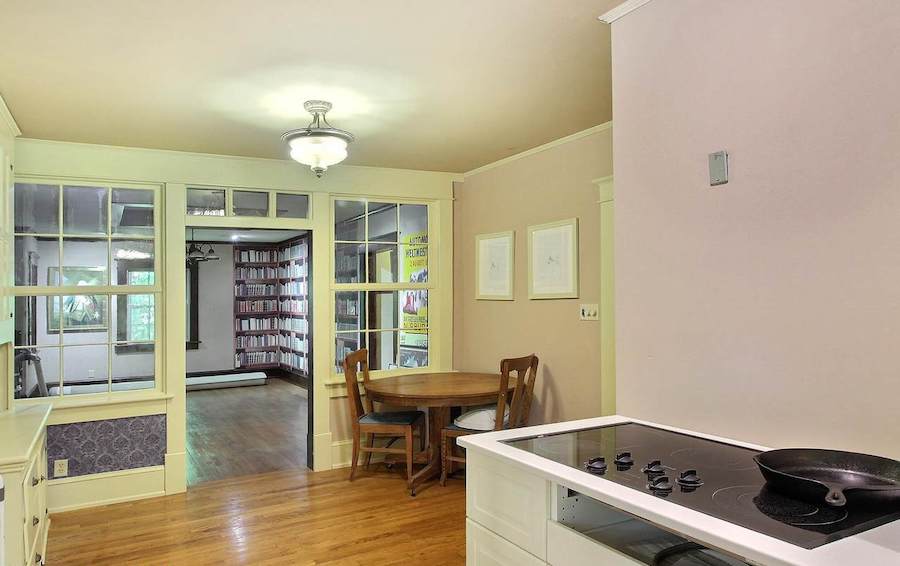 But, according to Cutler, the residents didn’t dine in the dining room all that often. “They took their meals in the inn, so the houses didn’t have full kitchens,” he says. Of course, no one can take meals in the Inn at Pocono Manor now, for the hotel burned down in a 2019 fire many in the area consider suspicious. 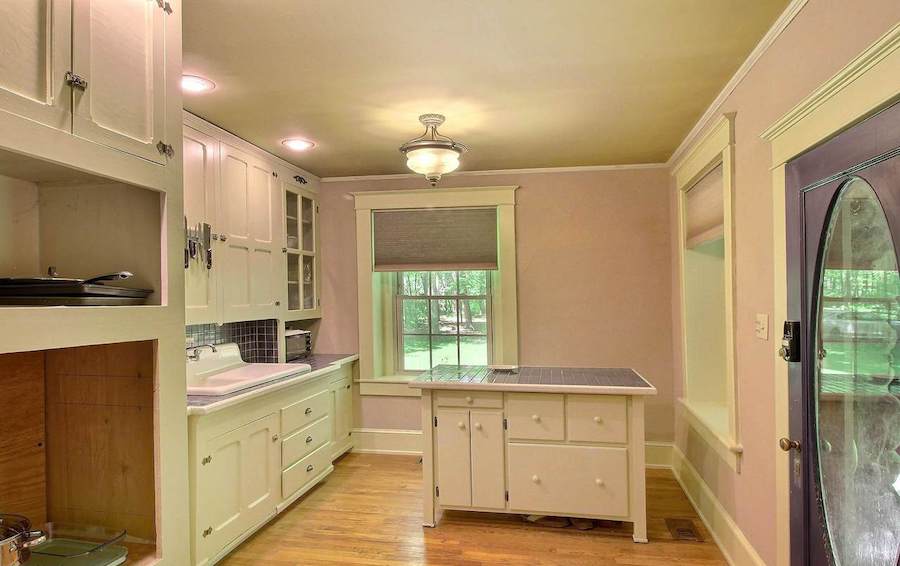 This means that this house’s kitchen, which is well suited for catering, needs some appliances. It already has a refrigerator, natch, and it has a dishwasher as well. A smooth-top Thermador electric cooktop needs only to be hooked up to a circuit. But as of now, it lacks an oven and microwave. You can see the spaces waiting for them in this picture. 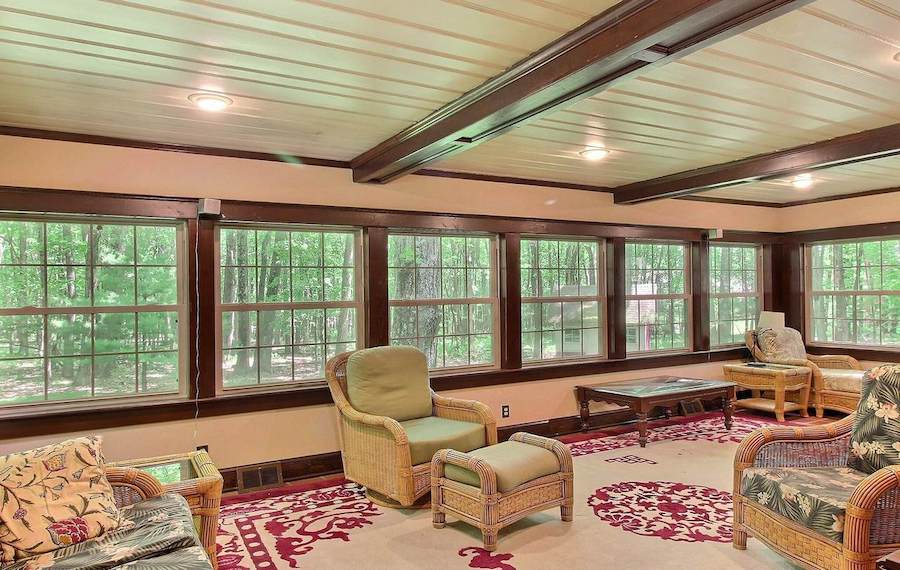 Both the dining room and kitchen have doorways — French ones, in the case of the dining room — that lead to the Florida room in the back. Its walls of windows look out on this house’s expansive wooded backyard. There’s also a stone patio off the kitchen. 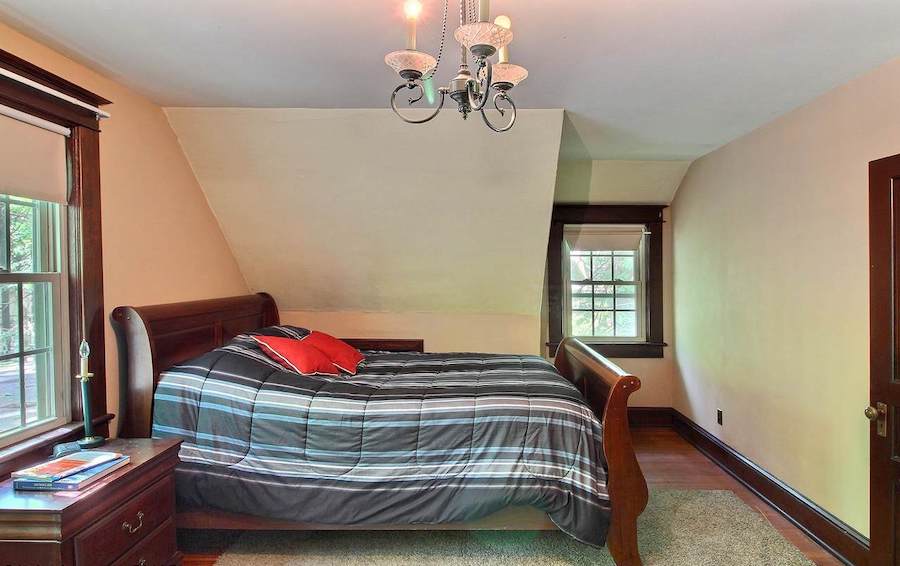 One of the upstairs bedrooms can accommodate a queen- or king-sized bed, while the other is long and fairly narrow and configured for two twin beds. 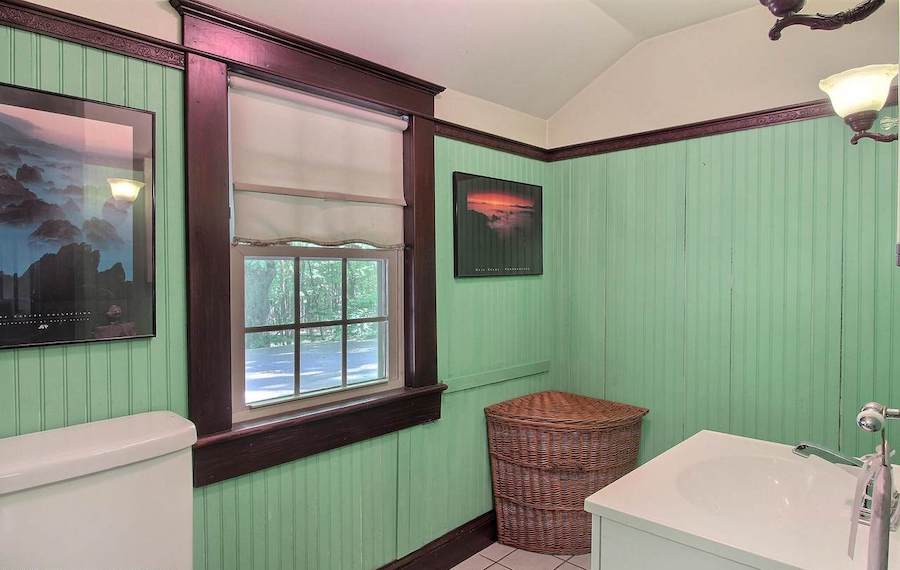 A large cedar closet connects that bedroom to the upstairs bathroom. 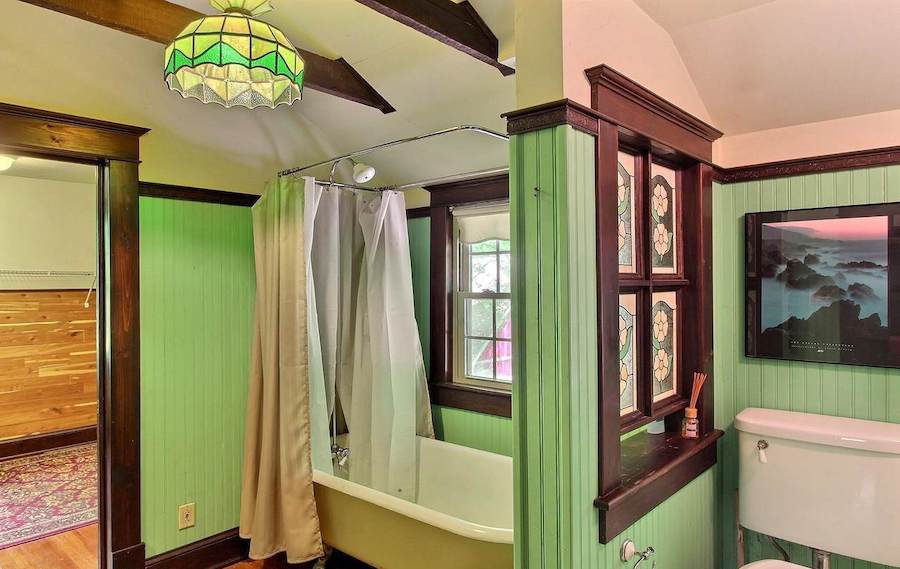 That room has its original shiplap paneling and its original clawfoot tub, separated from the toilet and vanity by a stained-glass window. That tub also has a shower add-on that’s original to its installation.

There’s also a potential guest suite over the detached two-car garage. All you need to do to realize that potential is fix up the interior space and the stairs leading to it.

It should be clear from what you see here, however, that whatever work you put into this place would reward you handsomely, as it has the other Pocono Manor homeowners who have brought houses here, including some others Cutler owned. Situated near the top of Little Pocono Mountain, Pocono Manor offers breathtaking views in places.

And while the inn may be no more — there’s been talk of rebuilding it, but so far, that talk has not led to action — the golf course is still open. And beyond it and its next-door driving range are a network of hiking trails that lead through lovely scenery and greenery. 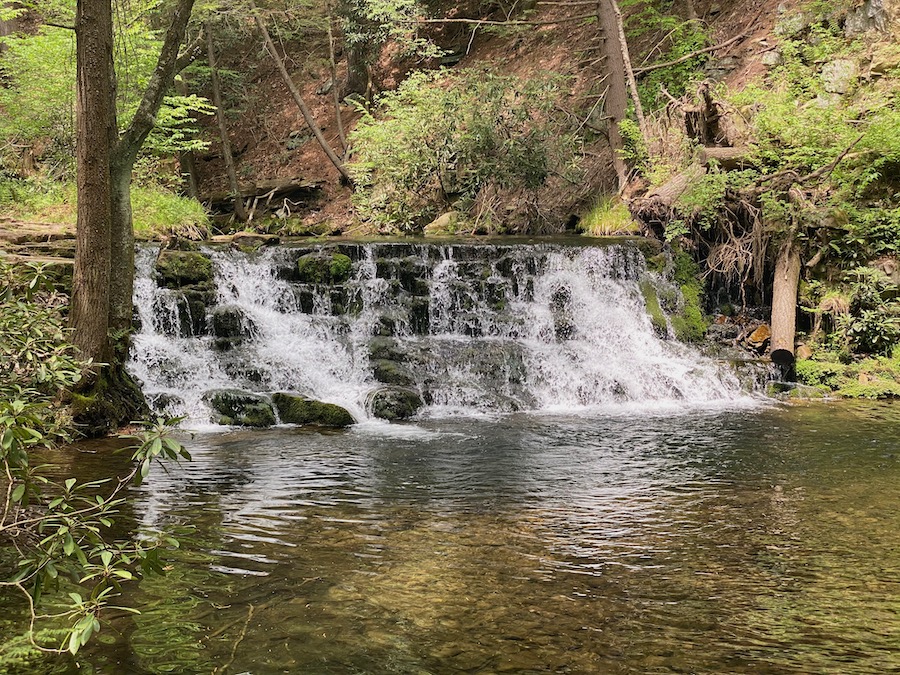 One of them takes you to this cool waterfall on Swiftwater Creek.

And Pocono Manor has the huge, African-themed Kalahari resort hotel and indoor water park for a next-door neighbor, too. When you don’t feel like cooking, you can dine in one of its numerous restaurants offering cuisine from plain to fancy.

Pocono Manor and Buck Hill Falls have many things in common, including recreational opportunities, spacious early-20th-century “cottages” and hotels that bit the dust within recent memory. But this Pocono Manor cottage house for sale has two advantages over those Buck Hill Falls cottages: it’s easier to get to from Philadelphia — it’s just off Exit 1 off I-380, about a two-hour drive from the city — and it has a much more attractive price.