Actually, “recycled” might be a better term to describe this gorgeous modern renovation that makes copious use of reclaimed wood. 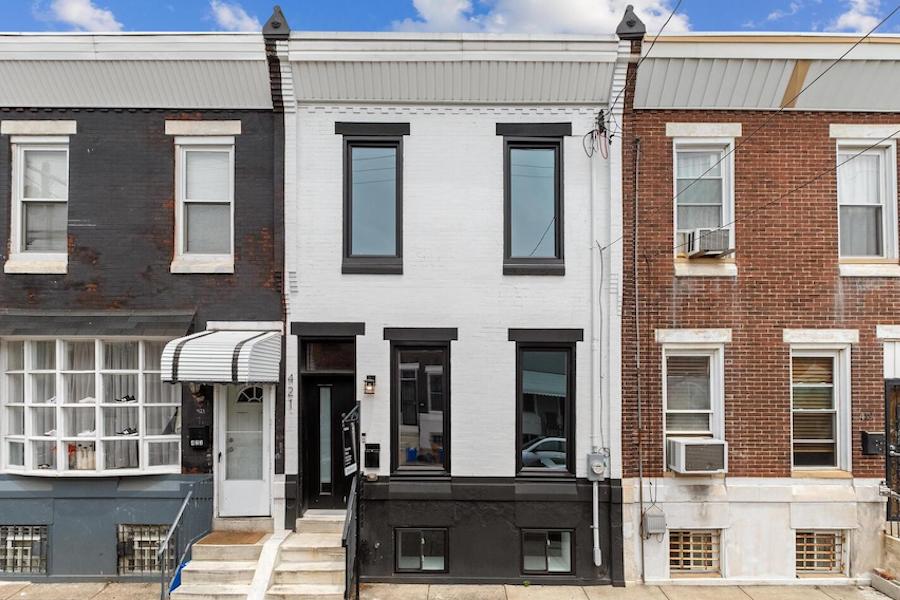 This rowhouse block in Dickinson Square West offers a glimpse into the history of rowhouse renovation in the city. To the right, an untouched early-20th-century rowhouse; to the left, one that got remodeled in the 1940s or 1950s with a bow window in front; and there in the middle, this stunning 21st-century modern rebuild at 421 McKean St., Philadelphia, Pa. 19148 | Bright MLS images via Compass

There’s a truism in the green building community that states, “The greenest building is the one that’s already standing.”

Put differently, a building that’s already been built won’t require huge inputs of resources and energy when you recycle it, so its carbon footprint will be lower than that of even the most eco-conscious new building. What’s more, you can add even more eco-friendly features to it and make it even less of a resource hog.

I don’t think that the folks who rebuilt this two-story workingman’s rowhouse in Dickinson Square West in 2019 were thinking all that deeply about carbon footprints or energy consumption or things like that when they set about recycling it. Making it look beautiful, I suspect, was uppermost in their minds.

They did do that. But they did so in a way that was very environmentally conscious by using reclaimed wood all over the place.

The wood adds extra warmth, a touch of the rustic and a rough-edged appeal to this very modern makeover. 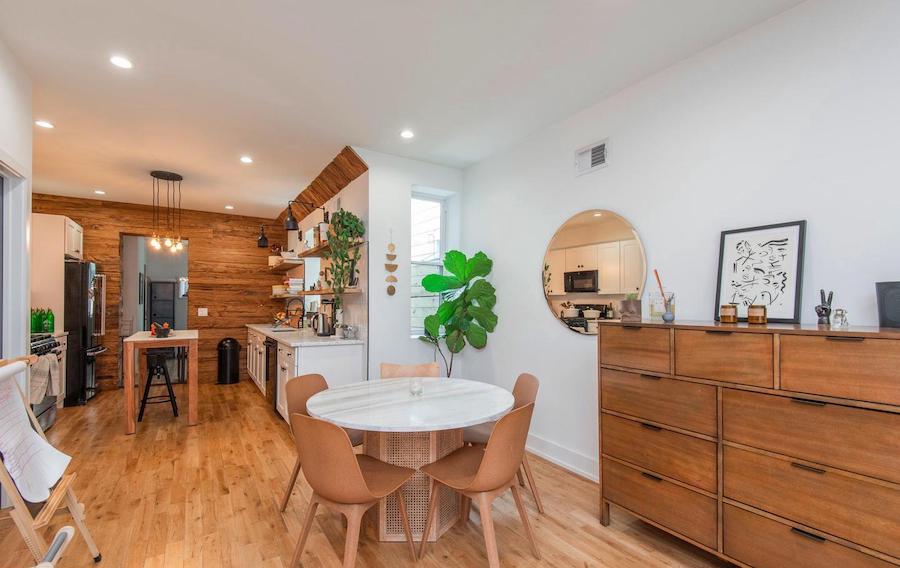 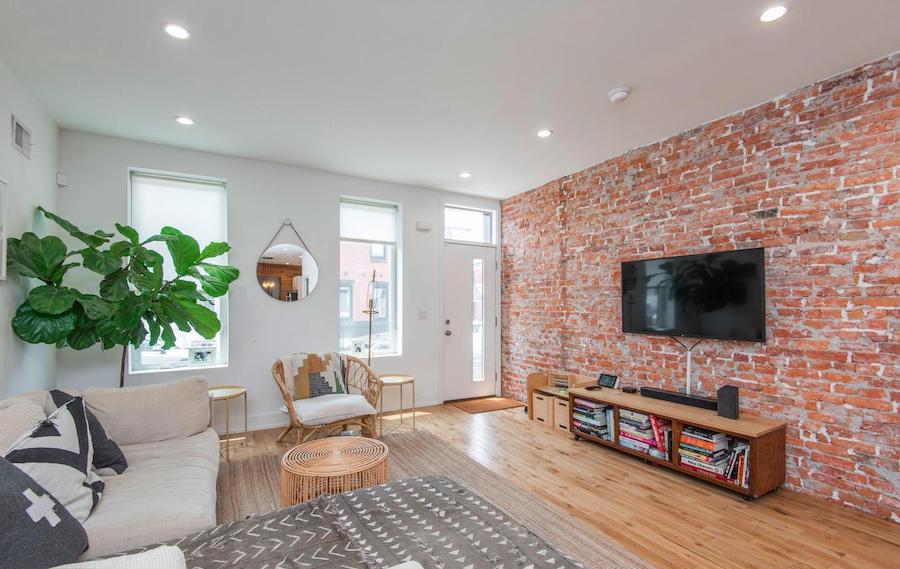 In the living room, it gets complemented by an exposed brick wall. 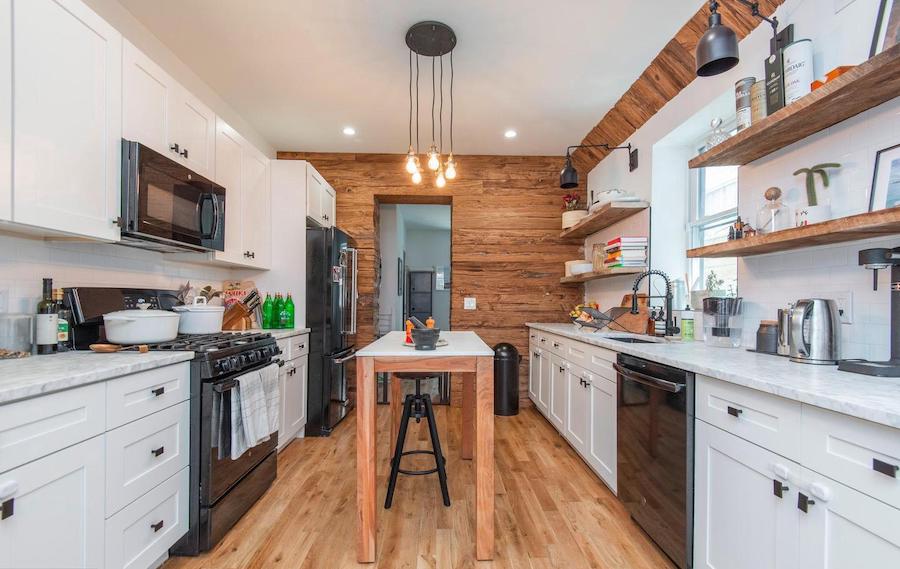 In the kitchen, reclaimed mushroom wood forms a backdrop to all the action. The floating shelves also are made of reclaimed oak. The wood that went into the Shaker cabinetry, however, is new, as are the top-of-the-line black stainless-steel KitchenAid appliances. 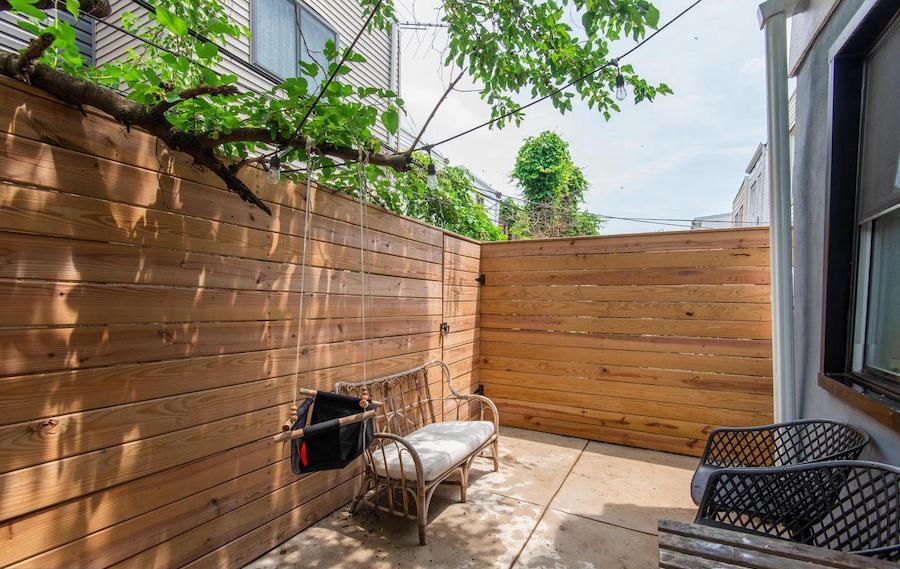 You’ll find more wood in the fencing that surrounds the rear patio. Whether or not this was reclaimed, I can’t say. Neighboring trees provide shade and a touch of greenery. (You might want to add some yourself by refitting your patio with green stormwater management features that help reduce runoff into the city sewers. The Philadelphia Water Department’s Rain Check program will even pay you up to $1,500 for doing this.) 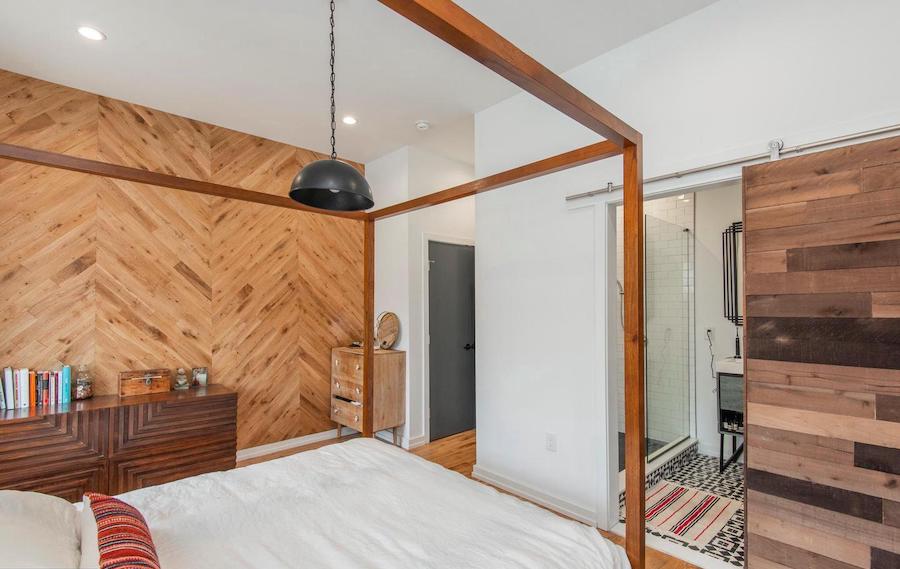 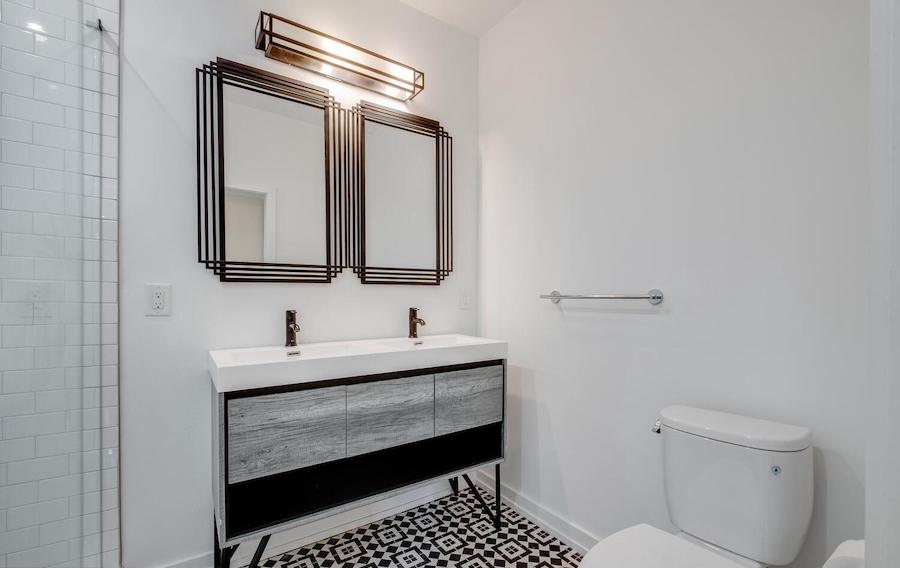 The primary bathroom is just about the only place inside this house where you won’t find a stick of wood save for that barn door. But it’s a looker too, with its quartz dual vanity, custom cement tile and metal-framed mirrors. 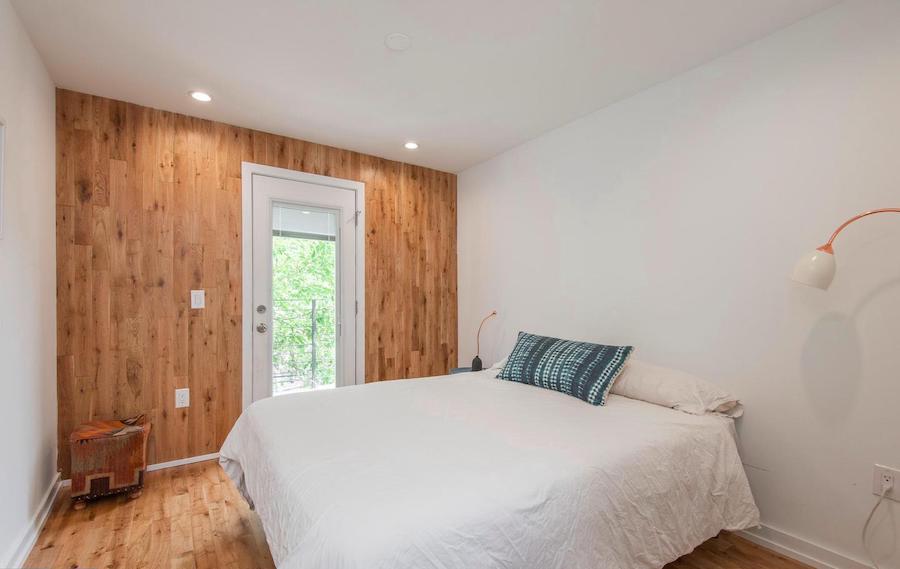 But the rear bedroom also has a reclaimed oak accent wall. 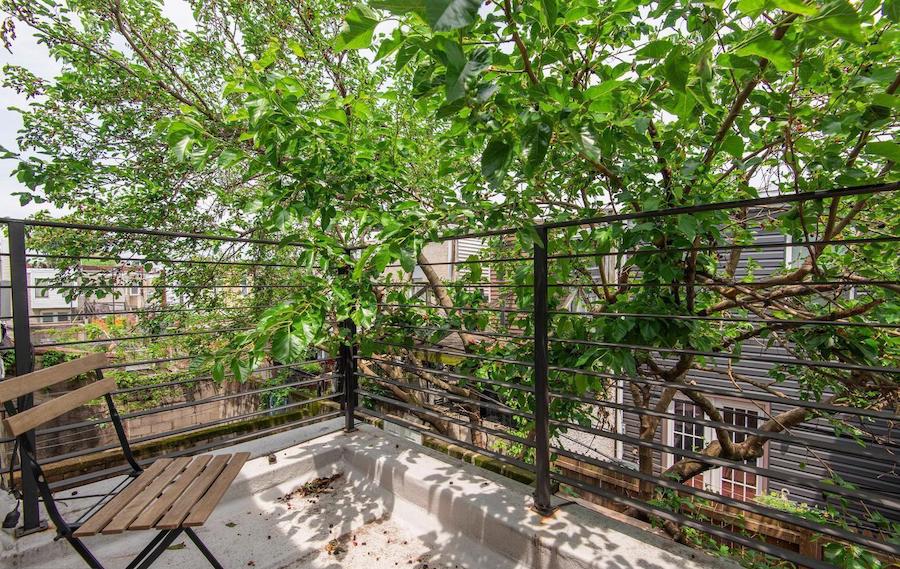 And it has a balcony overlooking the rear patio. 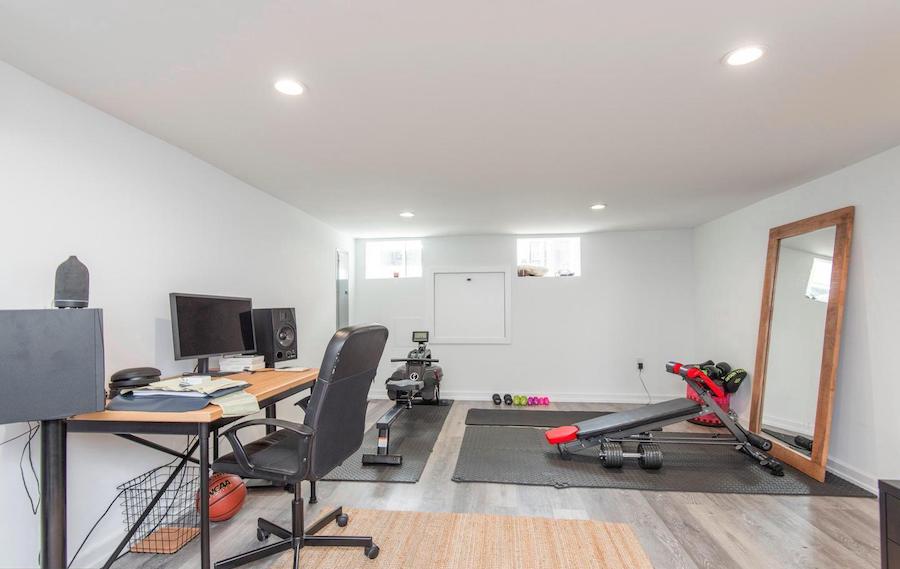 In addition to all this, this Dickinson Square West rebuilt rowhouse for sale has a bonus room on the first floor behind the kitchen that could serve as a fourth bedroom, home office or den. And it has a finished basement that has plenty of room for recreation, workspace, a home theater, a home gym or storage.

Then there’s its location: one block north of Snyder Avenue, which is lined with eateries and service businesses. You’ll find an Acme supermarket, a Target and a slew of other shops at Snyder Plaza, four blocks to your east. James Beard Award-winning John’s Roast Pork, which serves some of the best cheesesteaks in the city, is just east of Snyder Plaza. SEPTA’s Route 29 bus will take you to Columbus Boulevard, where you will find IKEA, Lowe’s, Best Buy and Raymour & Flanagan, among other merchants and eateries, at Columbus Commons and a Walmart Supercenter, a Home Depot and more at Pier 70.

The 29 bus will also take you to Broad Street, where you can take the Broad Street Line into Center City for more urbane shopping, dining and entertainment.

Too good-looking to pass up, rebuilt in an environmentally friendly fashion and just blocks from big-box Valhalla, this very attractive Dickinson Square West rebuilt rowhouse for sale has just about everything you could want in a home at a very attractive price.