The Delwyn Turns a ’50s Strip Mall Into a Walkable Community

The owner of the Bala-Cynwyd Shopping Center figured it was time to give it a few hundred more customers with an urbanity retrofit. The results are so nice, they’re now doubling down on the idea. 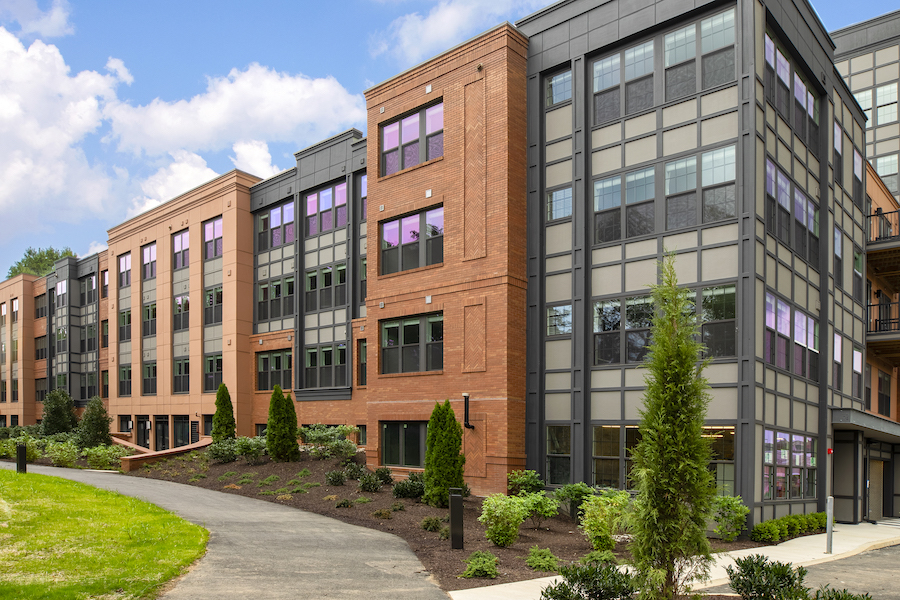 The Delwyn apartment complex’s classic industrial exterior contrasts sharply with the midcentury modern appearance of the Bala Cynwyd Shopping Center, of which it is a part. But that contrast clearly signals the new direction property owner Federal Realty Investment Trust seeks to take the property in the coming years. | Photos courtesy Federal Realty Investment Trust unless otherwise noted

Back in the 1920s, when the automobile was still new, developers experimented with neighborhood and shopping center designs that accommodated cars while still catering to people on foot.

But as automobiles spread across the landscape, those early experiments got discarded in favor of planning and design that privileged the car above all other means of transportation. Pedestrian-scaled shopping centers connected to the surrounding streets, like Suburban Square, gave way to strip centers and malls surrounded by seas of parking.

The Bala-Cynwyd Shopping Center, built between 1953 and 1956, was one of the first such centers in this area. Anchored by a Raymond Loewy-designed Lord & Taylor department store and a Penn Fruit Company supermarket, the center stretched along City Avenue near one end of a developing suburban office district. A large parking lot, however, separated the stores from the street. 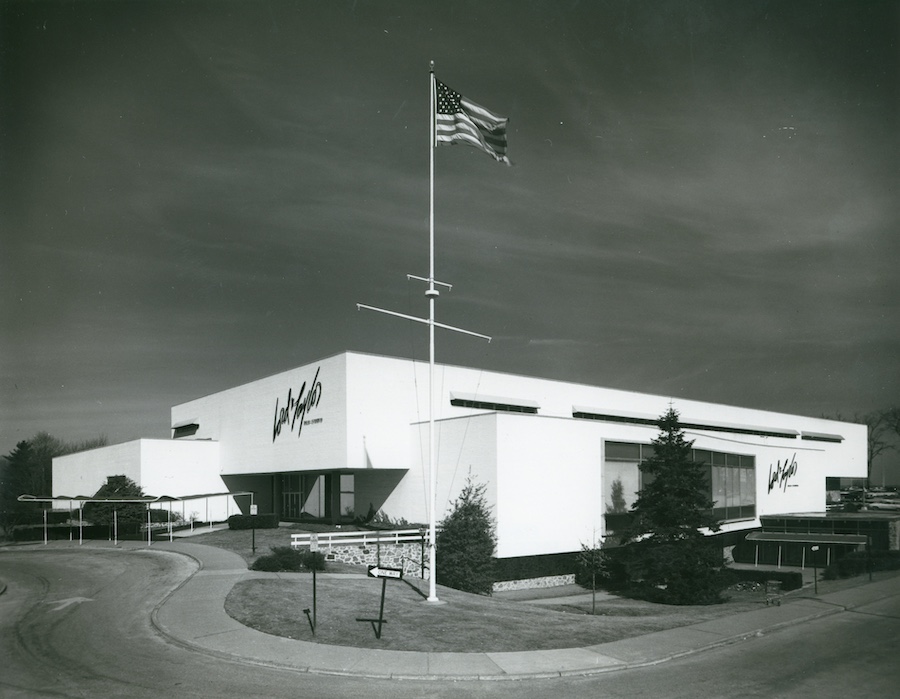 The Lord & Taylor department store as it appeared in 1968. The view is from the southwest; the lower level on the north side was buried in the 1990s. | Photo: Jacob Stelman Collection, Athenaeum of Philadelphia

The center was the retail linchpin of “The Golden Mile,” Lower Merion Township’s emerging “central business district.” In contrast to the older downtowns like Ardmore and Bryn Mawr that clustered around the stations on the railroad that gave the Main Line its name, this one was geared entirely towards the drivers who used the recently opened Schuylkill Expressway to reach it. 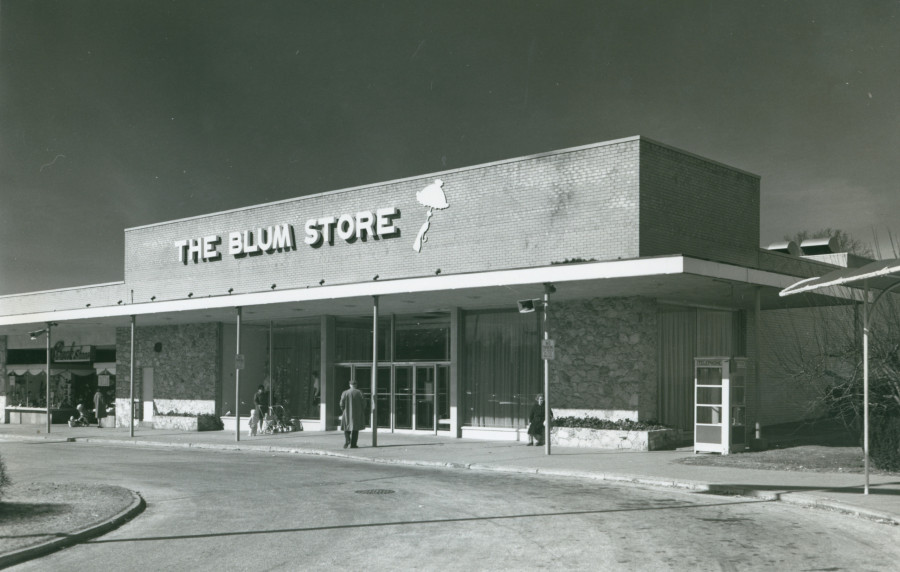 Next to Lord & Taylor was The Blum Store, a high-end women’s clothing retailer. The Acme supermarket occupies its site now. The original Penn Fruit supermarket at the opposite end now houses the L.A. Fitness gym. | Photo: Jacob Stelman Collection, Athenaeum of Philadelphia

A history of the area written some years later by the Lower Merion Conservancy described it thus: “Part high style, part kitsch, the development of the Golden Mile found architectural expression in America’s increasing dependence and love of the automobile, in contrast to the more tightly controlled, pedestrian-centered, transit-oriented development in Center City,” 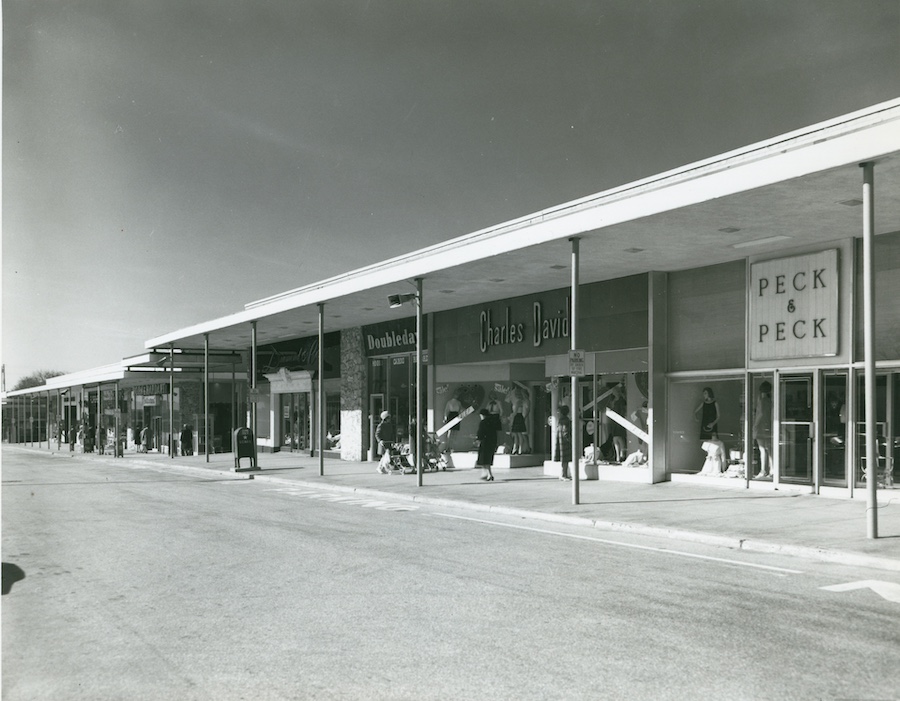 The center in 1968 still had its sleek midcentury modern appearance. It too got a facelift after Federal Realty Investment Trust bought it. According to the company, sales and occupancy have remained strong even through the pandemic. | Photo: Jacob Stelman Collection, Athenaeum of Philadelphia

Now, 65 years later, Federal Realty Investment Trust, which purchased the shopping center in 1998, has decided that the time has come to retire that autocentric development model. Street-oriented outbuildings that house restaurants and a bank have now lined City Avenue near the Belmont Avenue corner of the center for about ten years. And last fall, the first phase of the center’s transformation into a walkable, mixed-use live/work/play neighborhood began with the opening of the Delwyn apartment building.

The building’s architecture recalls early-20th-century industrial buildings, something that distinguishes it from the midcentury modern architecture it’s set against. That style, however, means that the apartments get plenty of light through large windows. And it’s located near the end of a passageway between buildings in the shopping center, making for convenient access to all the center’s stores as well as City Avenue itself.

Convenience is one of the selling points Federal uses to attract tenants to the Delwyn apartment complex. Having a shopping center with just about all the everyday services you need right outside your door saves tenants lots of time, says Mike Ennes, Federal’s senior vice president for mixed-use initiatives and corporate communications. The building’s modest size — a five-story, 87-unit structure — and its location in the Bala-Cynwyd Shopping Center means that residents can access basic needs like a supermarket, dry cleaner and hair salon in less time than someone living in a bigger building or one not part of a shopping complex would spend — up to five minutes longer per trip, he says.

“So each year, an individual living here could save five days of pure transit time, if they average two trips a day, which is very realistic,” he continues. “What would you do with your five days?”

Federal built some answers to that question into the Delwyn apartment building.

The building has a full suite of amenities designed to make working from home, entertaining guests and just hanging out with neighbors, or even by yourself, easy and efficient. 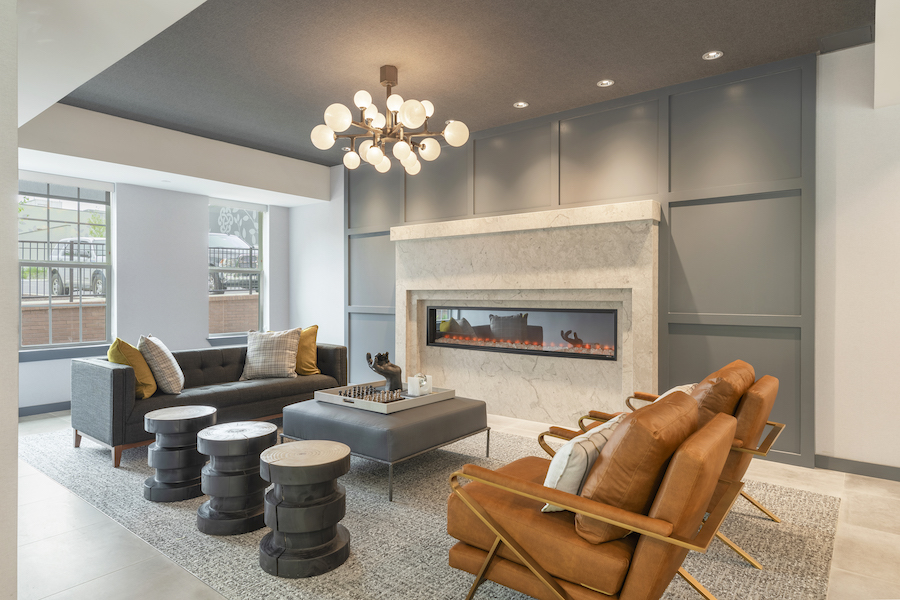 For relaxing, it has a seating area with fireplace in the lobby and an outdoor terrace with Adirondack chairs, pod chairs, chaise lounges and a fire pit. 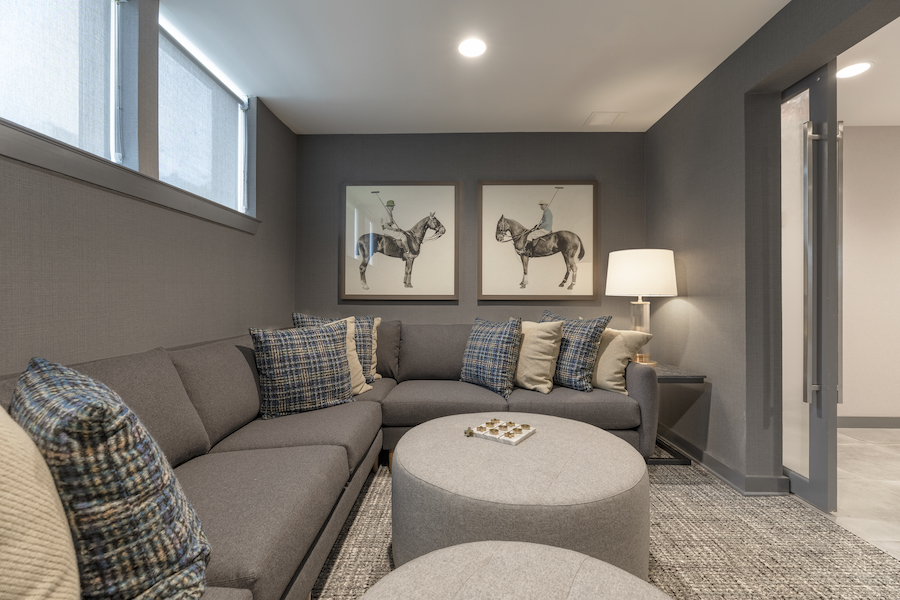 For entertainment, it has a comfortable media lounge. 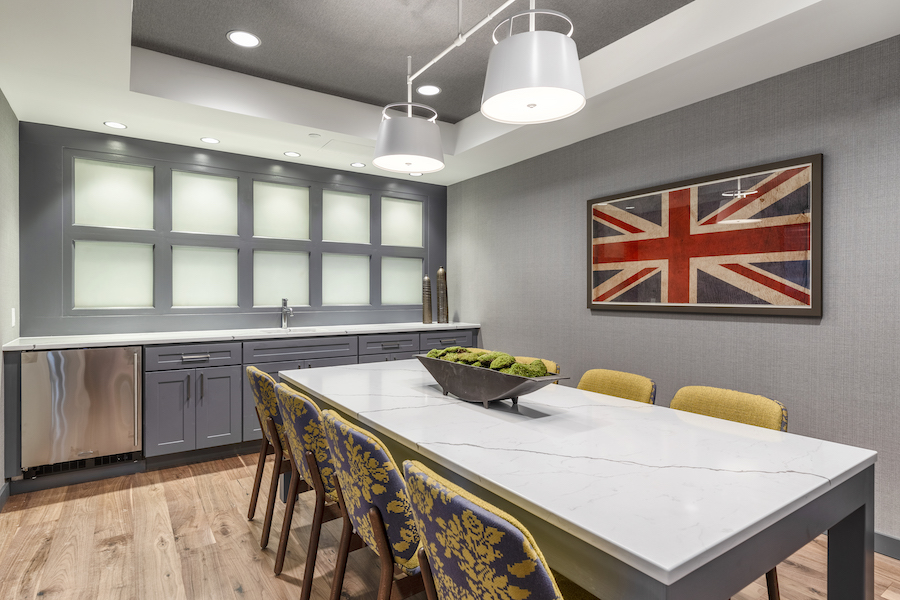 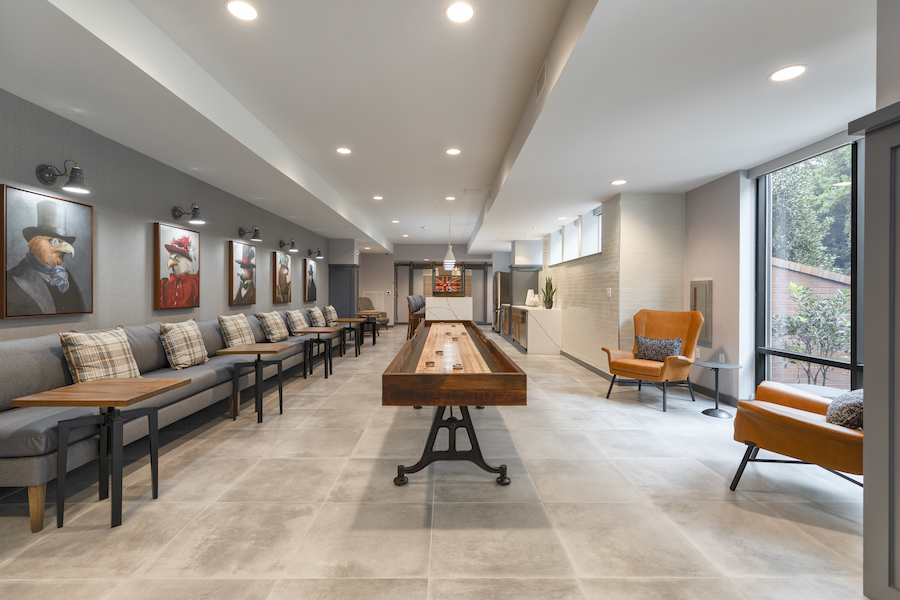 For indoor entertaining, it has a dining room with a catering bar and a catering kitchen with bar seating in its game room. 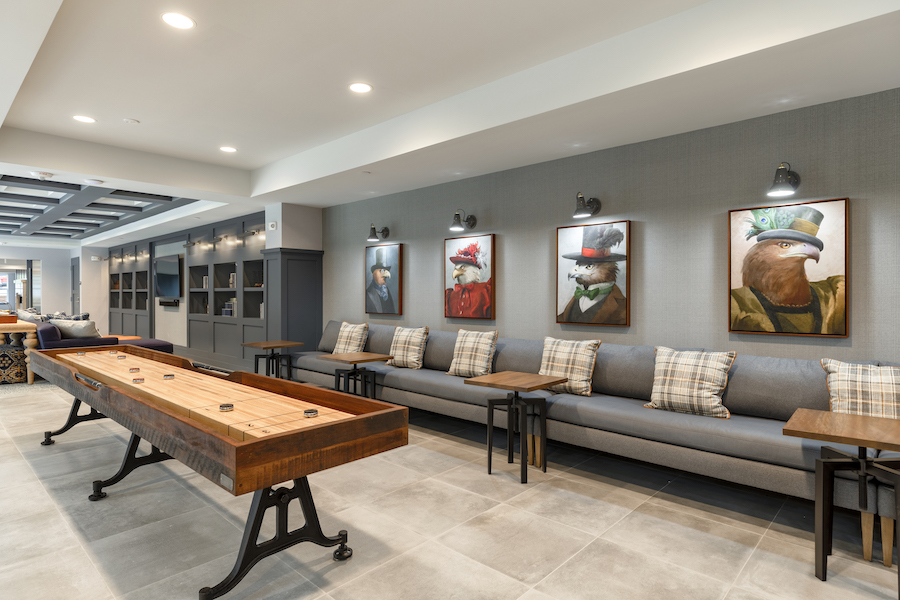 The game room also has a shuffleboard table, and doors open from it onto the outdoor grill area. 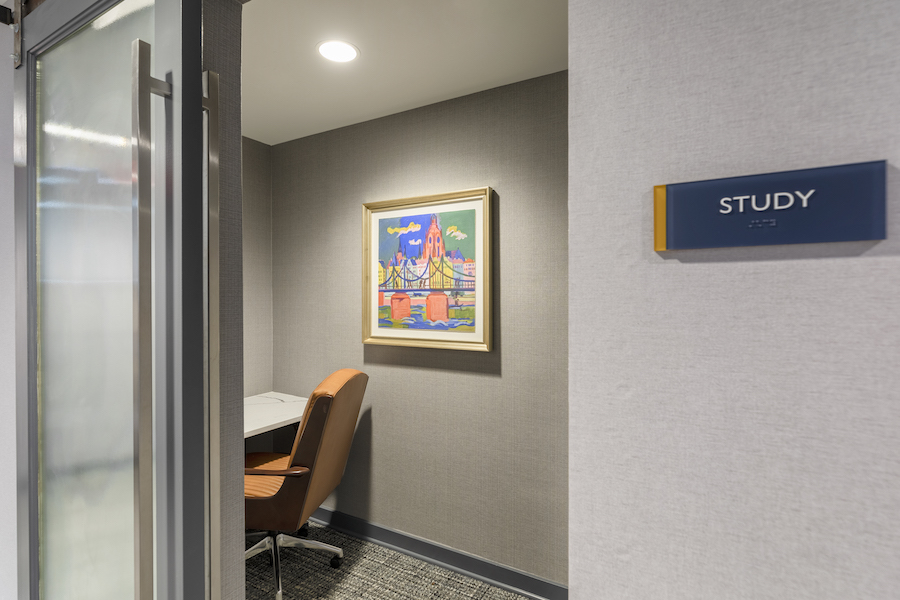 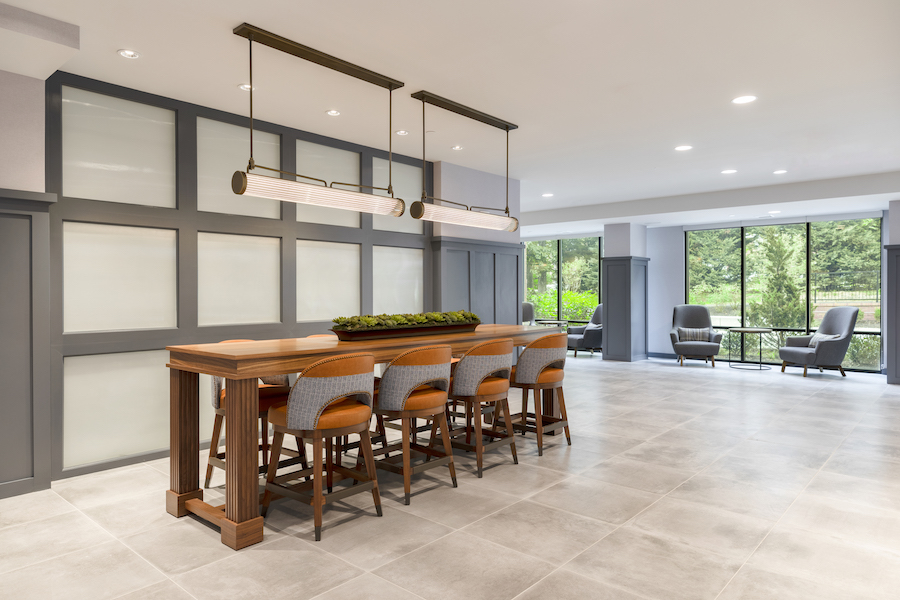 The dining room doubles as a conference room, and there’s also a study room as well as a work table in the lobby. And, Ennes says, that media lounge also serves as a workspace: “Work from home can mean many things to many people in terms of how they like to work. Having been in the hotel industry” — before joining Federal, Ennes developed the Canopy brand for Hilton Hotels — “it’s amazing where you find people working. You would assume the desk, but often times it’s in bed or in a chair.” 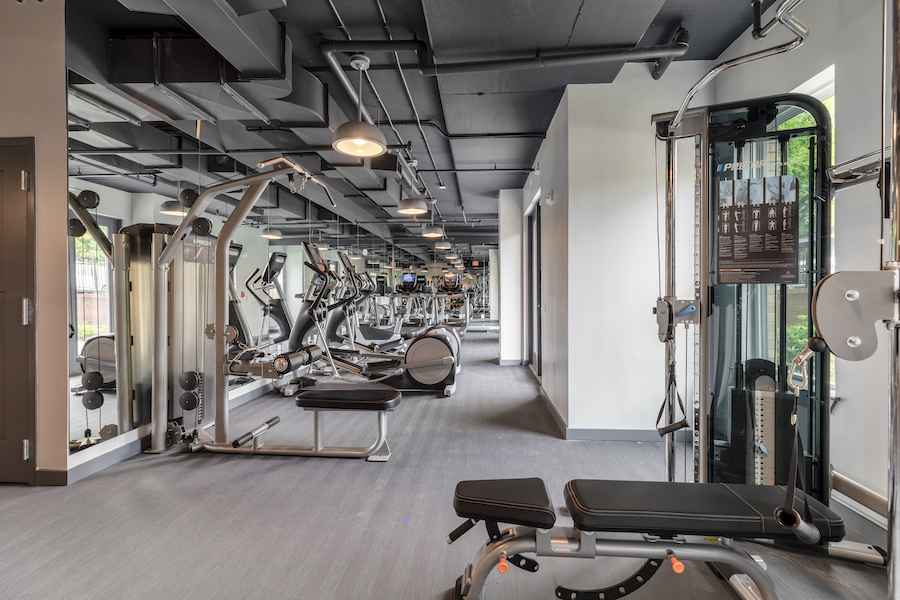 And, of course, it has a fitness center with an outdoor yoga terrace — and if residents want more than these facilities, they can join LA Fitness in the shopping center, a two-minute walk away

“For the small footprint that we had, we tried to make the most of the space we had to offer to the residents outside their units,” says Ennes. 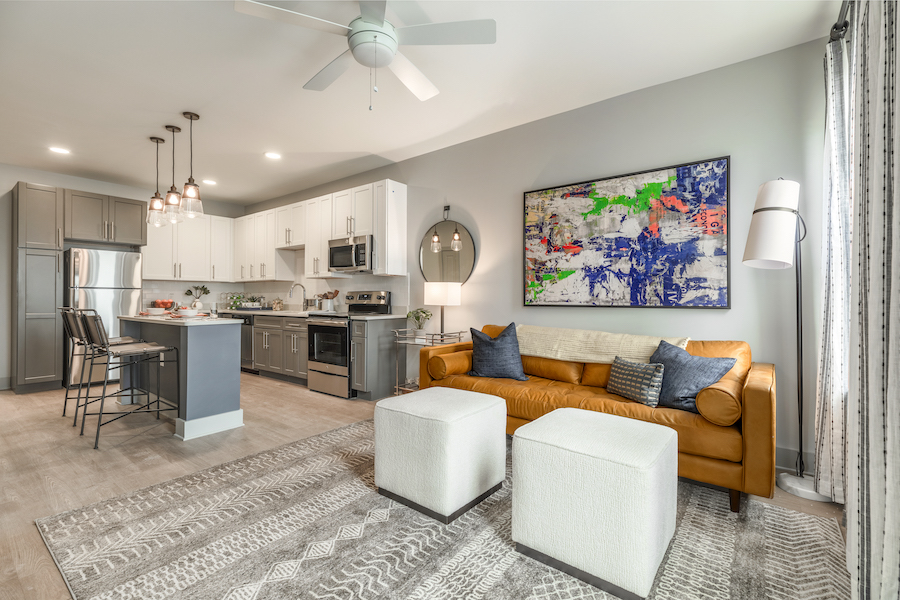 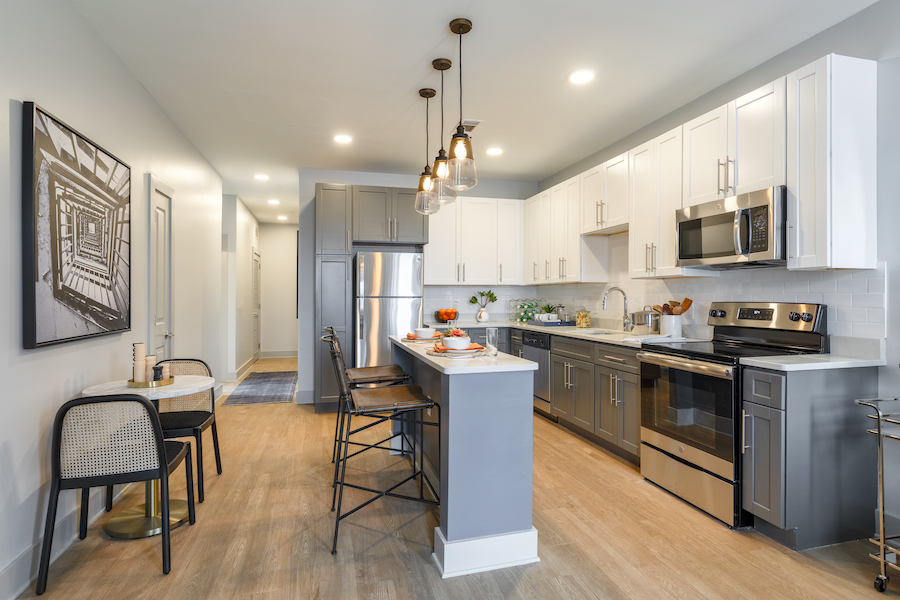 The apartments themselves are also set up to make working from home easier, with USB ports in all rooms, and, of course, they have well-equipped kitchens with bar seating and space for dining in their open main living areas. 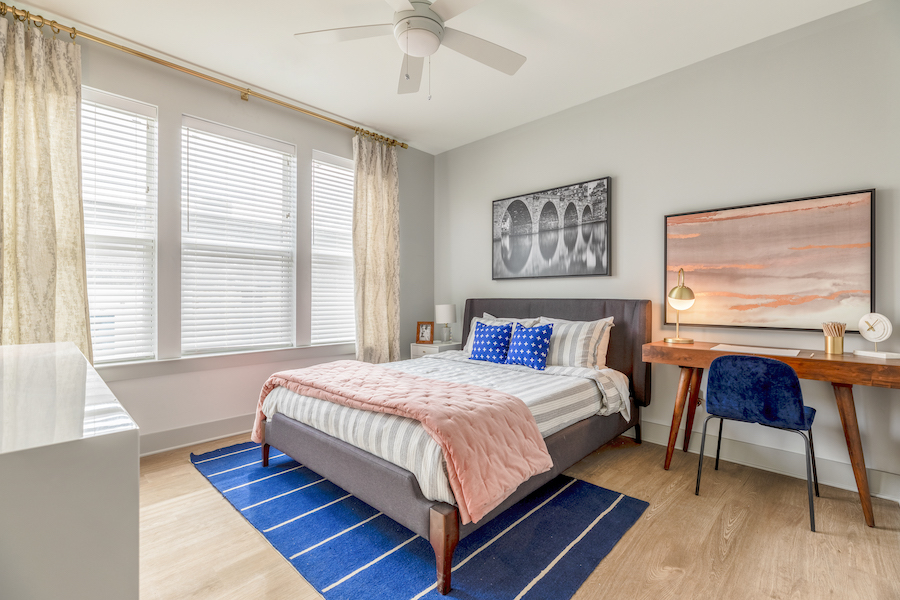 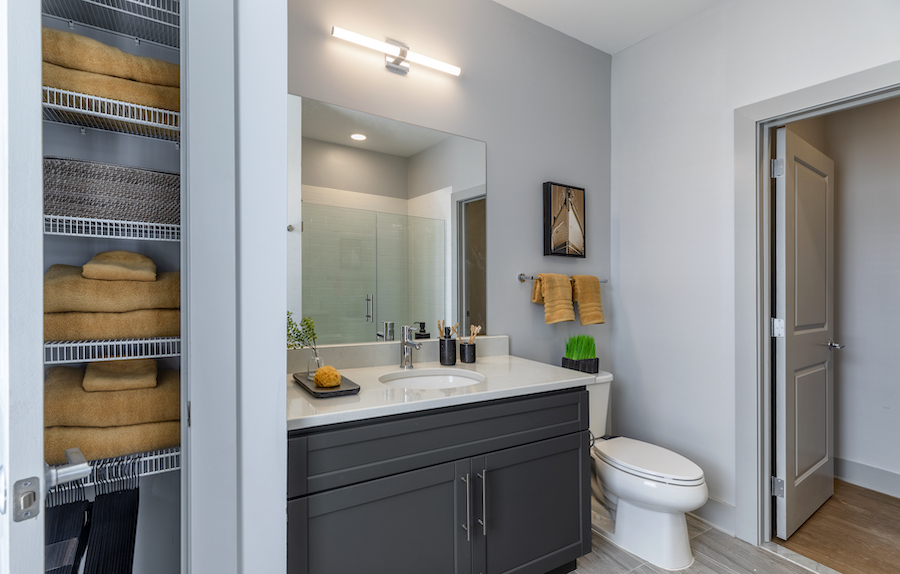 They also have plenty of closet space, hardwood floors throughout, ceiling fans in all the bedrooms and plenty of kitchen storage space. “And generous bathrooms,” adds Ennes.

And the shopping center is also a key amenity for residents. In addition to the fitness club, itincludes several businesses that fill essential everyday needs, including an Acme supermarket, a dry cleaner and a bank branch. It also has several restaurants that would be glad to supply food for residents’ events and parties.

“One of the great things about being here versus in a more secluded location or apartment community is, you’re in the heart of it,” says Ennes. Yet the building’s location away from the street, with the shopping center acting as a sound buffer, gives it a suburban level of quiet.

All of this, Ennes explained during our tour of the building last fall, serves as proof of concept and a template for future development of the center. “We worked on this for about two years in terms of planning,” he says. “We see this as a way to validate our future development [of the site]. We’re really encouraged by the overall reaction of prospective tenants to what we’ve built here.

“And we’re looking to take this and refine it a little bit further and potentially do more within this development opportunity.”

And in February, Federal revealed that it was ready to proceed with the further refinement: a new mixed-use residential/retail building on the site of the shuttered Lord & Taylor department store.

Rendering of new mixed-use apartment/retail building to be built on the site of the Lord & Taylor department store | Rendering: Bernardon Architecture via Federal Realty Investment Trust

The new building will mean the loss of Loewy’s 1955 midcentury modern store, but what the center loses in architecture it will more than gain in function. The building that will replace it will contain 10,000 square feet of retail space, somewhere in the vicinity of 230 rental apartments and a two-level enclosed parking garage below the street level on the City Avenue side. As the shopping center’s parking lot slopes downward to the north along one side of the store, there will be at-grade access to the parking garage in the rear of the building.

Because the new building is larger, Ennes says, it will likely have a “more robust package of amenities” than the Delwyn, but he also says that some of those more robust amenities will also be available for Delwyn residents to use in order not to cannibalize the demand for the existing building.

This building is the first phase of a multiphase project that will ultimately remake the shopping center’s east end, then upgrade the center’s core. According to John Tschiderer, senior vice president for development at Federal, this project was born out of the same long-term rethinking of the center’s role and function that produced the Delwyn to begin with. “The Delwyn was basically underutilized, back-of-the-center parking that just sat there idle for years and years,” he says. “It was a field of dumpsters back there.”

So, taking the long-term approach to enhancing the value of its assets the company prides itself on, Federal looked ways to make that dumpster field productive, and the answer it came up with was rental apartments. And as the Delwyn was being built, the announcement of Lord & Taylor’s liquidation gave the company another opportunity to think about the long term.

And the answer it came up with the second time closely resembles the one they came up with first. Guided by Lower Merion Township’s overarching vision for its “downtown,” the City Avenue District, “we did a highest-and-best-use analysis,” says Tschiderer. “We looked at every potential sector in the market, from office to medical office to senior living to apartment living, and we landed on this opportunity to do rental apartments at the Lord & Taylor site.”

Federal expects to break ground on the new building sometime in 2022.

Because the site is part of the shopping center itself, however, it will have that retail component to tie it together with its neighbors. And the below-grade parking tucked under its rear will allow Federal to develop the parking lot to the building’s east. Following that, the company plans to redevelop the corner lot that now houses Chili’s, then upgrade the rest of the shopping center.

Exact plans for these phases have not yet been finalized, but it’s probably safe to say that they will advance the transformation of the shopping center from a midcentury autopian island to a walkable district that ties in better to the streets and properties around it — a trip back to the future, if you will.

The Delwyn by the Numbers