Where $1,400 a Month Gets You The Most (and Least) Space in Philly-Area Apartments

According to RENTCafé, apartments renting for around the statewide average range from an average of 676 square feet in Philadelphia to 992 in Pottstown. 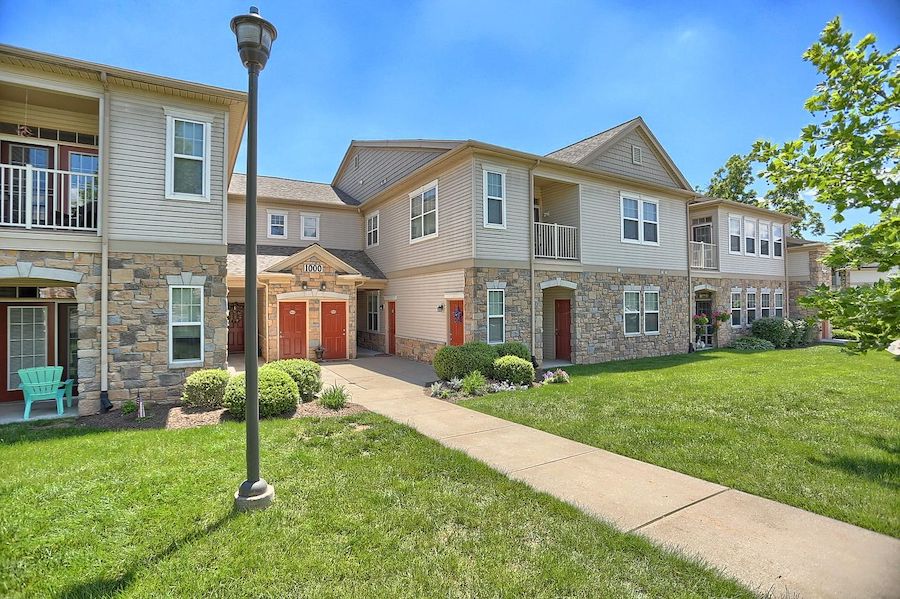 The Orchard Ridge aparnment community is located just outside Pottstown, the community where $1,400 per month buys you the most apartment for your money on average in this area. Our own search turned sup apartments similar in size to these in almost every community on this list. | Orchard Ridge photos: High Associates via Zillow

Finding a place to rent is stressful. But finding a place to rent with adequate space on a $1,400 monthly budget while simultaneously navigating the woes of the COVID-19 pandemic might seem impossible. A report from RENTCafé hopes to ease these frustrations by outlining just how much bang you’ll get for your buck in various cities and towns across the Keystone State.

RENTCafé analysts used $1,400 – a figure close to the state’s average monthly rent of $1,396 – as the benchmark and analyzed average rent price and apartment size data provided by sister company Yardi Matrix. According to the data, in the five-county Southeastern Pennsylvania region, $1,400 per month gets you the most apartment in Pottstown and the least in Philadelphia.

If you’re not too keen on those places but still want to call this part of Pennsylvania home, the following locations vary in size and population, but are all within the five-county Southeastern Pennsylvania region. And our own search for $1,400-per-month apartments currently on the market found that you can get decently-sized apartments for that much just about anywhere — even in cramped Philadelphia.

The following five communities offer the most space for $1,400 a month. Ranked from largest to smallest, they are: 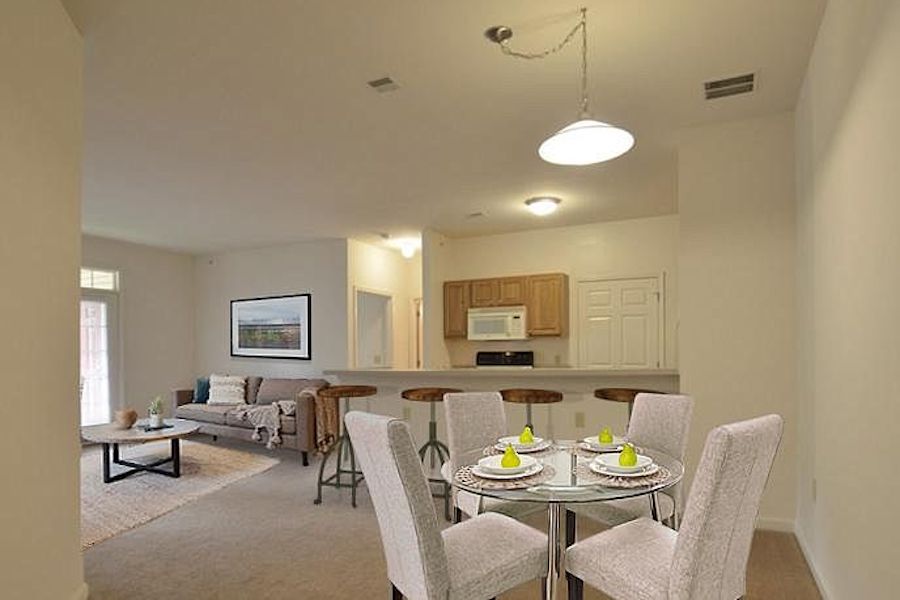 Noted as the second borough ever formed in the state (Norristown was the first), Pottstown has historically been a mecca for farming, dairy production, and industrial manufacturing. Today, golfing, train excursions, and a hot-air balloon ride are just a few of the offerings from this Montgomery County region. In a time before COVID-19, Pottstown’s Steel River Playhouse produced over 90 performances and hosted more than 10,000 people. The area is also home to the Philadelphia Premium Outlets – so nonstop shopping! 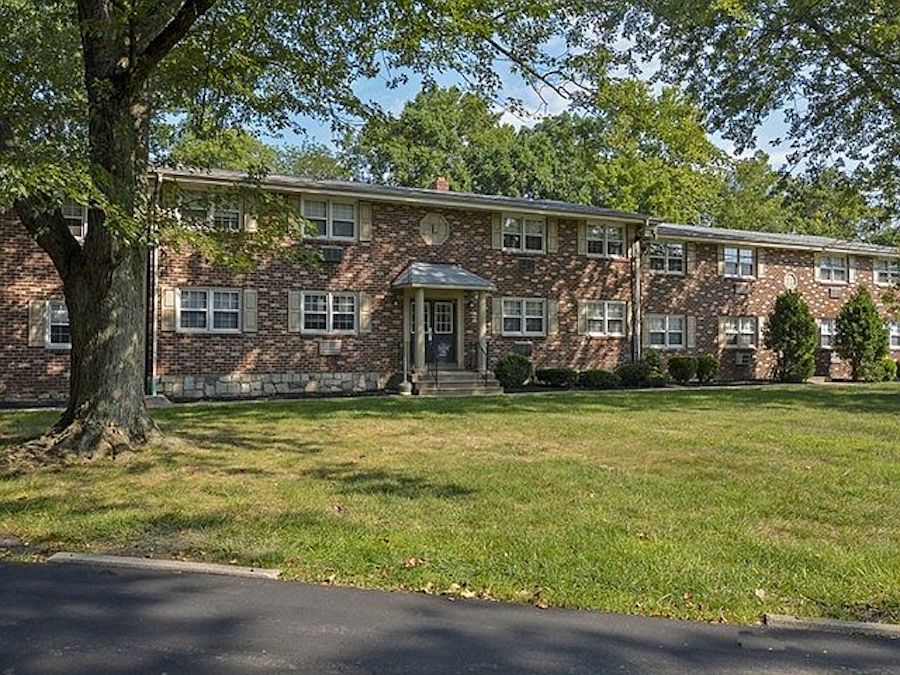 The Wellington in Hatboro, just down the road from Warminster, currently has a 900-square-foot two-bedroom apartment available for $1,445 per month. | Photo: Aion Management via Zillow

Named after a small town in Wiltshire, England, Warminster is one of the state’s oldest farming towns. Originally a part of Southampton Township before it was formally established in 1711, Warminster is lush and green with over 420 acres of recreation areas within 13 parks. The area’s Five Pond Golf Course was rated four stars in Golf Digest’s Best Places to Play 2013 and is noted as one of the best public golf courses in the greater Philadelphia area. 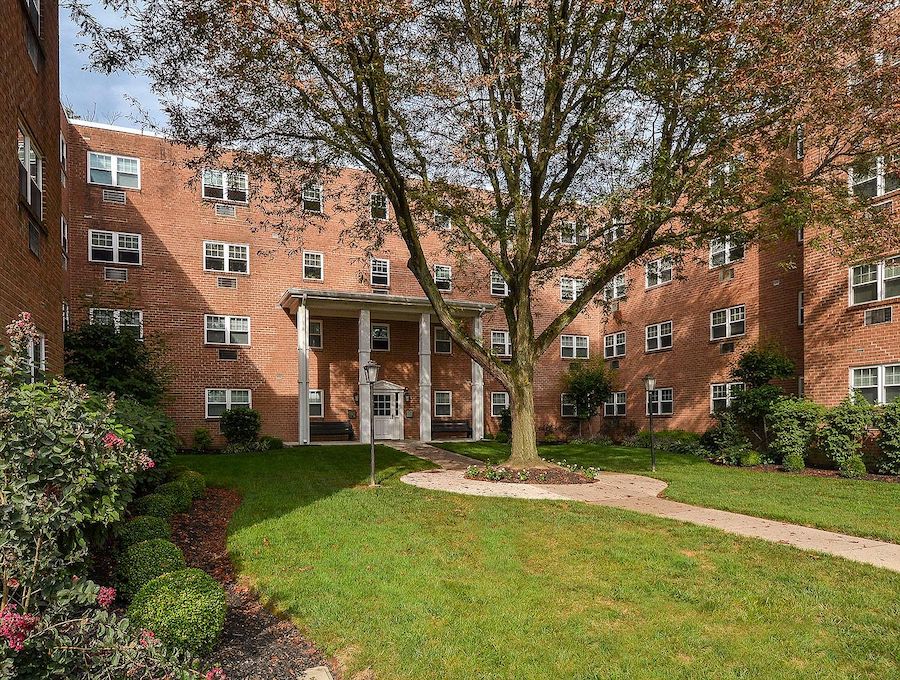 Horsham’s Fair Oaks community offers 880-square-foot two-bedroom apartments for $1,400 per month — but all of them are taken as of now. | Photo: Scully Company via Zillow

Once home to the Naval Air Station Joint Reserve Base Willow Grove, Horsham is one of the oldest municipalities in Pennsylvania. Ranking at number 14 on Niche.com’s list of Best Places for Young Professionals in Montgomery County, the area is perfect for anyone searching for a balance between the hustle and bustle of city life and the calmness of suburbia. 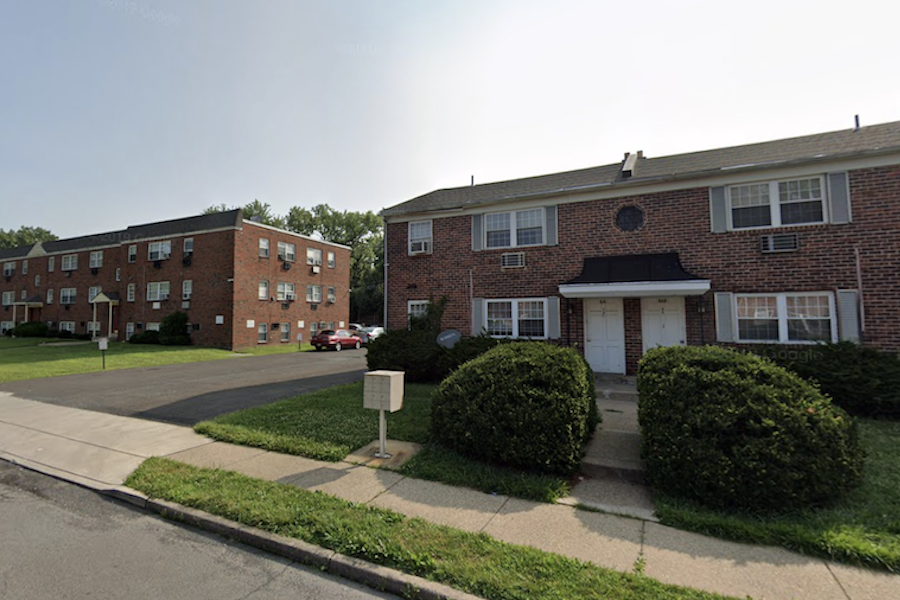 Apartments at Morrisville Meadows in the borough have two bedrooms, 850 square feet of space, and rents that start at $1,350 per month. | Google Street View image

This Bucks county borough is situated along the Delaware River Canal opposite Trenton and is approximately two square miles in size. What was once a village located within Falls Township, Morrisville is rich with American history. The borough’s Summerseat mansion has been home to two signers of the Declaration of Independence and the Constitution, George Clymer and Robert Morris. It also served as George Washington’s headquarters for crossing the Delaware. 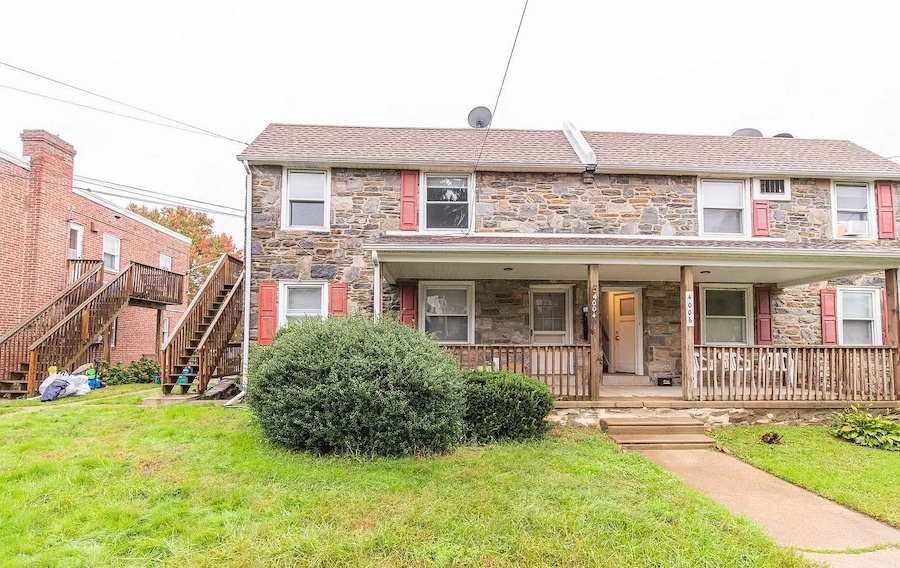 A newly renovated two-bedroom unit on the second floor of this four-unit apartment house in Drexel Hill offers a whopping 1,716 square feet of space for $1,425 per month. | Bright MLS image via RE/MAX Executive Realty

Approximate commute time to Philadelphia: 32 minutes by car, 34-37 minutes via Trolley Route 101/102 and the Market-Frankford Line

This neighborhood in Upper Darby is known for its walkability, accessibility, and high academic standards. The properties in this area are a mix of modern Victorian and colonial homes, along with more modern duplexes and townhouses. Legendary broadcaster and host of American Bandstand Dick Clark also made the area home during the 1950s. Today, the area not only hosts a number of bars, pubs and restaurants but also contains several parks, playgrounds, and even a comic bookstore – so there’s something for the whole family.

It should come as no surprise that Philadelphia offers the least amount of space for $1,400. It’s the largest city in Pennsylvania and its fifth-most-densely-populated municipality, which means everyone living in it has less space to themselves on the whole. But it’s not the only gem located in the southeastern section of the state. For what these locations lack in space, they make up for in ease and convenience to the big city.  Ranked from smallest to largest, they are: 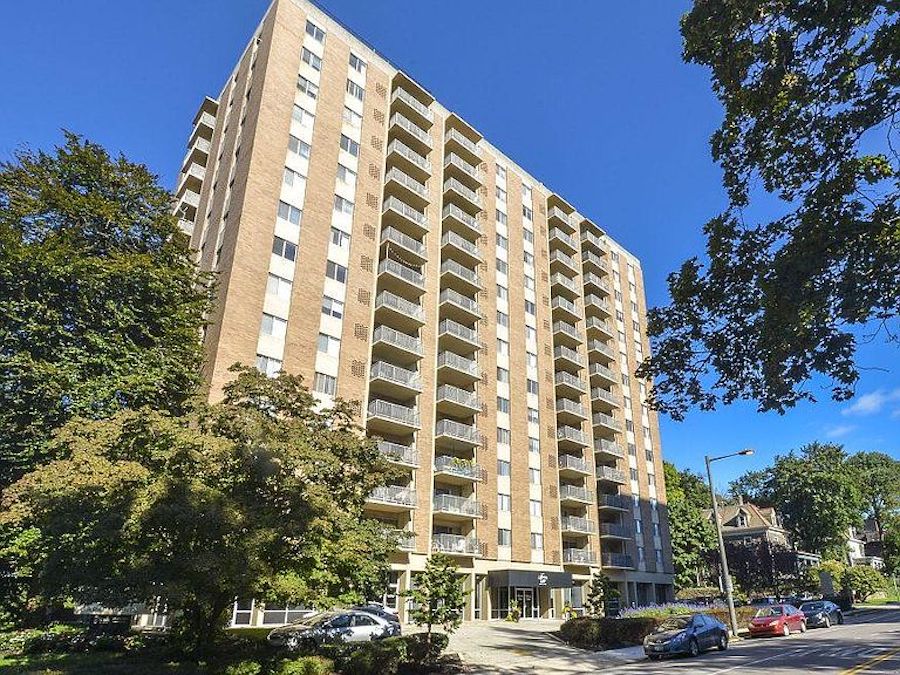 Philadelphia may have the smallest apartments on average of all the communities in this region, but that doesn’t mean you can’t find roomier ones for reasonable rents. For instance, you can rent a one-bedroom apartment with 800 square feet of space in Germantown’s Hathaway House for $1,370 to $1,380 per month. | Photo: Scully Company via Zillow

The city offers the smallest apartments in the state on average for $1,400 per month, but who cares when there’s so much to do outside of your apartment? From visiting historic landmarks like the Liberty Bell and National Constitution Center to dining at one of the city’s famed restaurants, Philadelphia offers many diversions to bring you out of your modest flat. The city’s neighborhoods are as diverse as its water ice flavors. Philly has everything you’d want from a major city – lantern flies included. 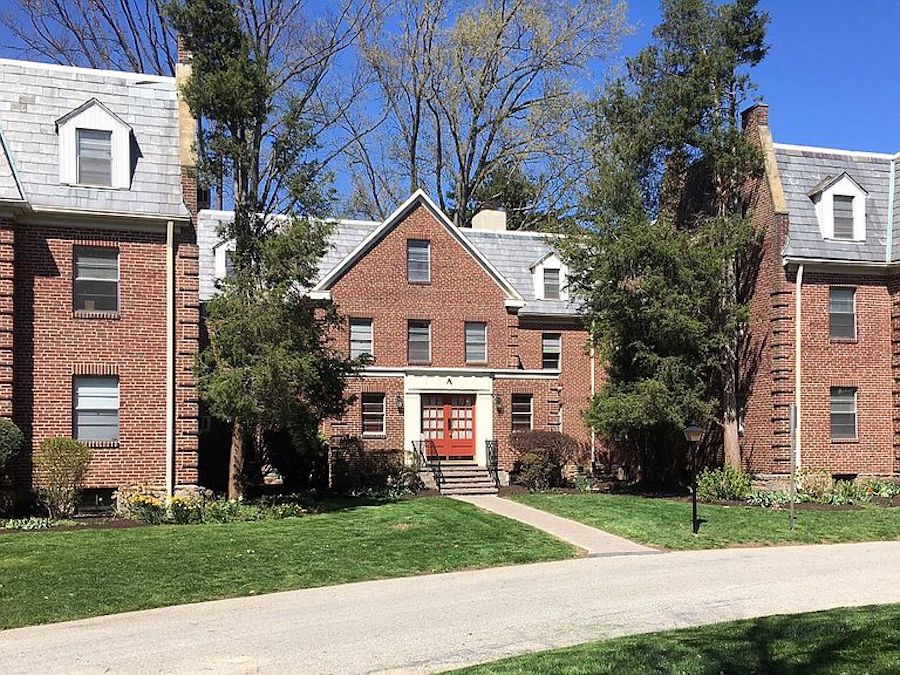 An 800-square-foot one-bedroom apartment in Wynnewood’s Wyndon apartments rents for $1,395 per month. An additional $50 per month gets you an additional 111 square feet. | Photo: Marks and Company via Zillow

Wynnewood is a suburb that lies just a few miles from the Philadelphia city line and the edge of Lower Merion Township. The area is a part of a collection of communities that make up the famed Main Line, which takes its name from the 19th-century railroad line that connected Philadelphia to Columbia. Wynnewood is conveniently close to Center City but also boasts a number of retail stores and dining options for those trying to avoid city traffic. 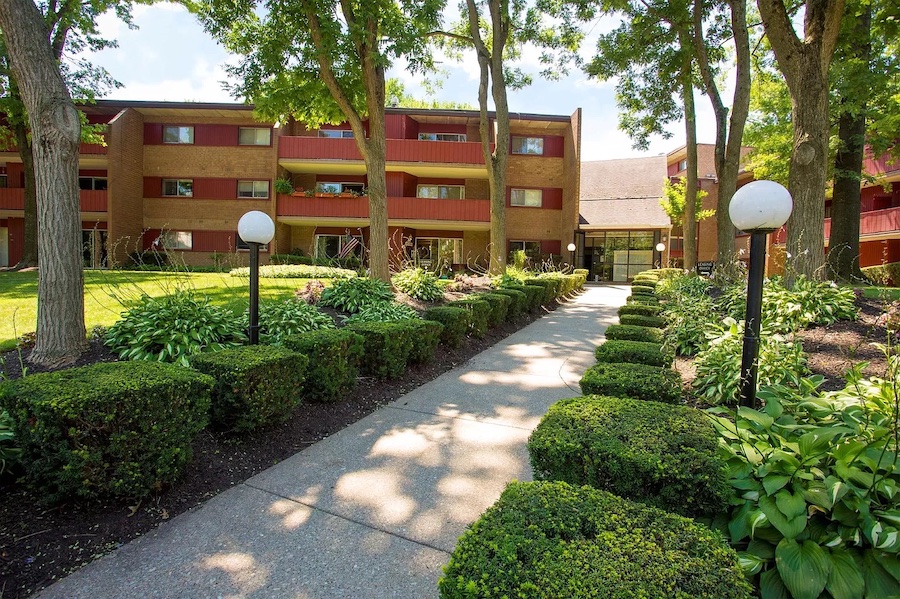 One of the suburban neighborhoods that collectively make up the Main Line, Bryn Mawr was originally known as Humphreysville until it was acquired by William H. Wilson in 1869. Today, Bryn Mawr is one of the calmest sections of the metro area and contains some of the best educational institutions in Southeastern Pennsylvania, with schools like Bryn Mawr College and the Baldwin School both nestled within the community’s boundaries. 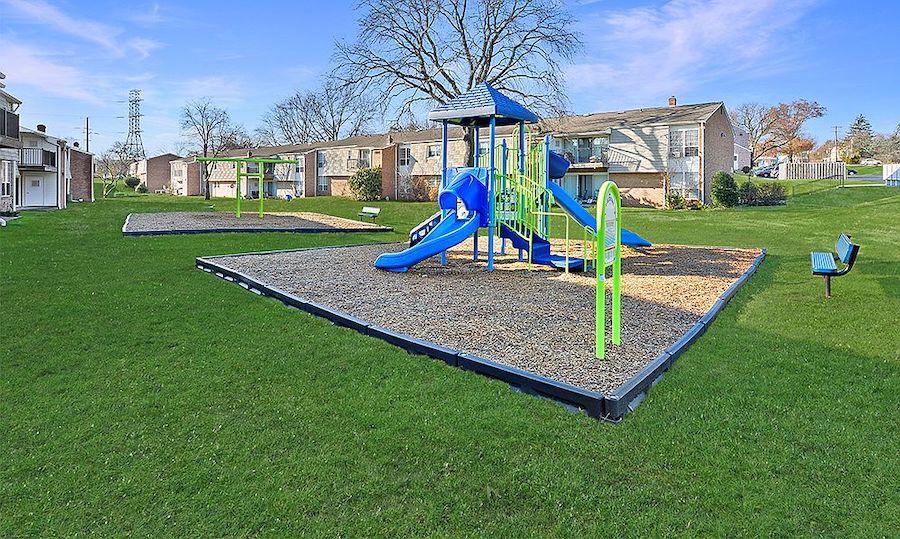 Amenities at Conshohocken‘s Sherry Lake Apartment Homes include a pool, a playground, a putting green, a dog run and a bike-share station. One-bedroom apartments have 610 square feet of space and rent for $1,420 to $1,735 per month. | Photo: Morgan Properties via Zillow

With a varied selection of bike trails, eateries, and local shops, Conshohocken, or “Conshy” as the locals call it, is one of the best places to live in Montgomery County. Living in this borough provides residents with the convenience of traveling into Philadelphia or heading west for shopping in King of Prussia. Restaurants and bars line Fayette Street, and the Schuylkill River Trail is the perfect way to burn off any newly acquired calories. The borough is slightly over one square mile, but Conshy feels like a city all on its own. 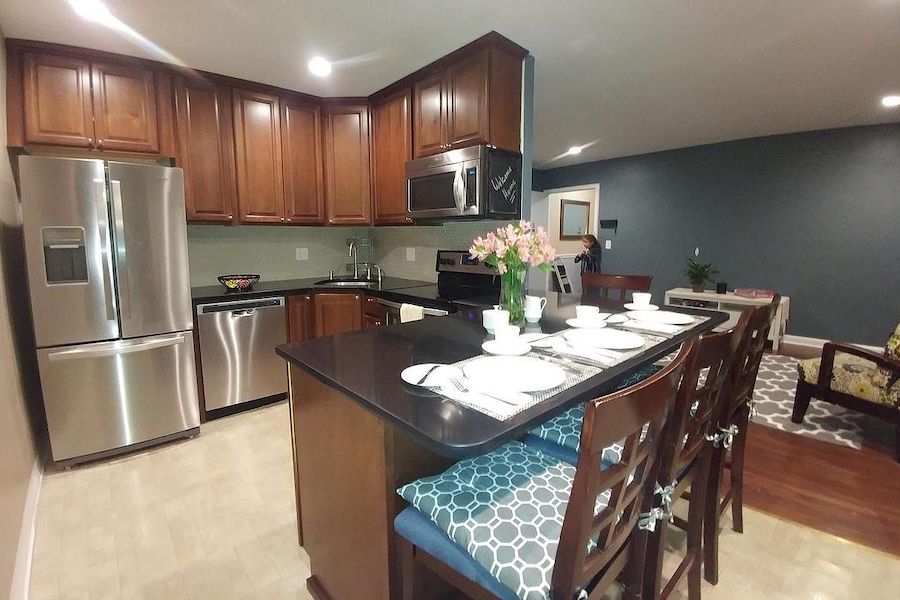 Currently available for rent in Media: this 937-square-foot two-bedroom condo in the Riddle Glen development for $1,400 per month. | Bright MLS image via RE/MAX Select

Named by Apartment Therapy as one of the “Coolest Suburbs in America” in 2019, Media encompasses all you could hope for in a quintessential small town. This suburban community has Quaker roots and is also known as “Everybody’s Hometown,” a moniker that the locals take very seriously. The Media FreeStore — which operates as its name suggests — allows locals to drop off items they no longer have a need for and pick up any new supplies for no cost at all. How’s that for community love?

According to RENTCafé, the average $1,400-per-month apartment statewide contains 890 square feet of space, which is a little more commodious than the national average size of 829 square feet for apartments renting for that much. Overall, regions within the Philadelphia media market offer spaces that are generally smaller than what other areas in the state offer for $1,400 a month. But not all: Other notable cities in this region with larger-than-average apartments include Allentown and Easton, where apartments average 974 and 953 square feet respectively. These areas, while not located within the five Greater Philadelphia counties, are just a few more miles away and offer an easy commute into the City of Brotherly Love.