This 1838 trinity is one of the earlier examples of this classic Philly house. An architect got hold of it and added on a very modern feature that makes it far less claustrophobic than usual. 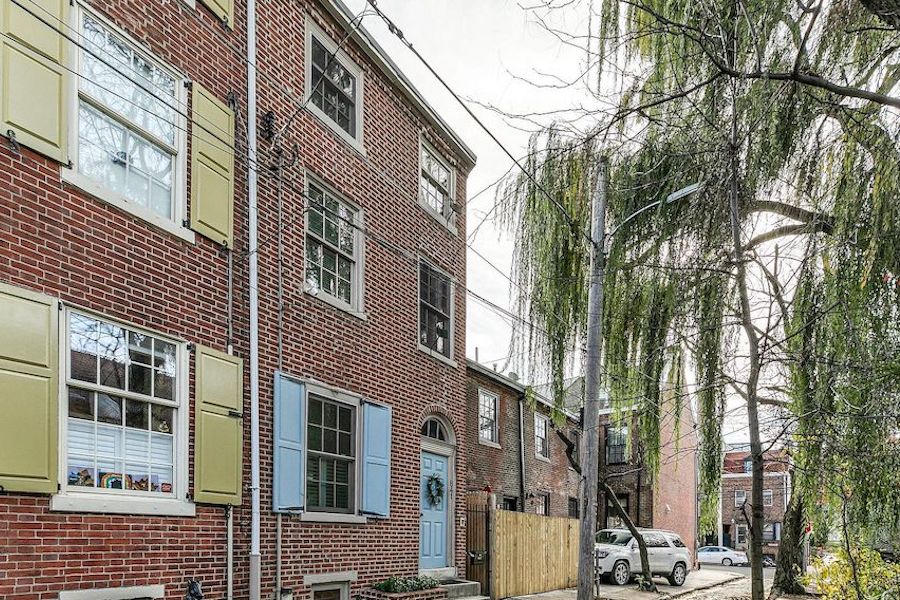 This historic Queen Village trinity has some nice surprises waiting for you inside. But the first surprise might come when you try opening the front door. Enter this beautifully expanded trinity through the gate at the side of 841 S. Hancock St., Philadelphia, Pa. 19147 | Bright MLS images via Keller Williams Philly

The trinity — Philadelphia’s original “workforce housing” — is just about as old as the city itself: Elfreth’s Alley, the oldest continuously occupied residential street in the United States, is lined with them.

And in an era when the classes separated themselves socially rather than spatially, these tiny houses filled the spaces between bigger ones all over the city.

They also popped up in its suburbs, too. One of the city’s earliest suburbs was Southwark, located along the riverfront just below the southern city limit at South Street.

What was then a brawling working-class neighborhood is today a much more genteel one. Even its present-day name — Queen Village — reflects that jump in status. And those modest little Southwark trinities have in turn become dazzlers like this Queen Village expanded trinity house for sale.

They still called this neighborhood Southwark when this house was built in 1838. And the original trinity retains its original Southwark character. But this house passed into the hands of an architect who built an addition on its back. 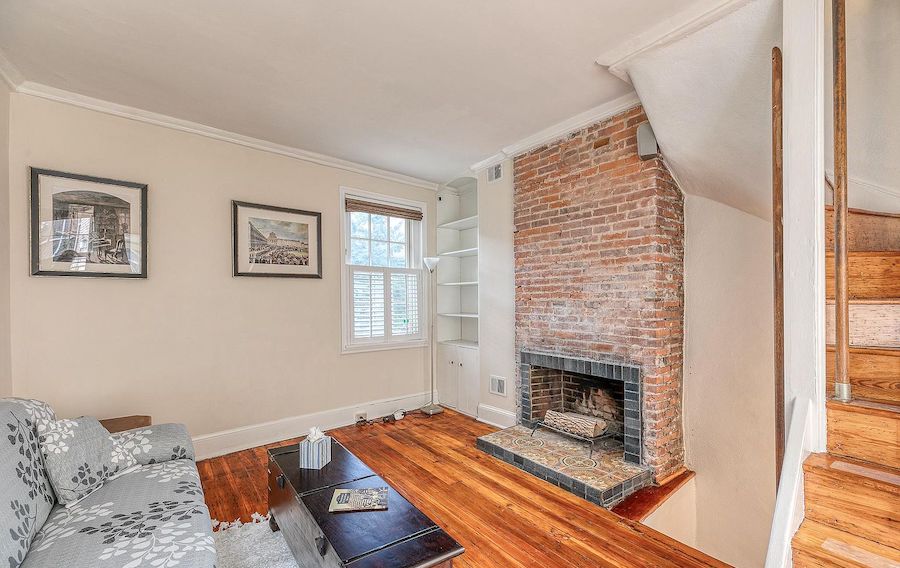 Happens all the time, you say. Sure, it does. But what this architect did with that addition makes both it and the house it’s tacked onto now stand out from the crowd. 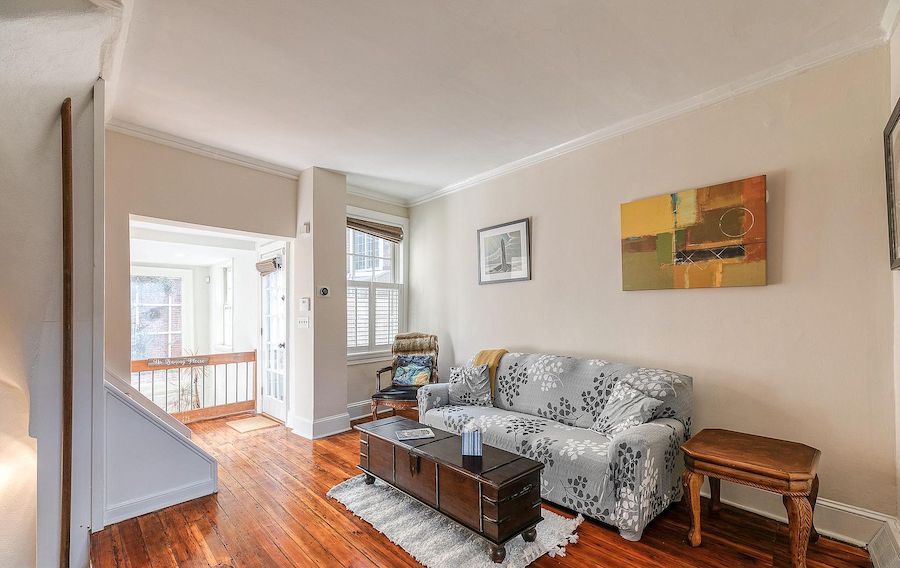 For starters, the entrance got moved from the front of the house to the side, via a new door built into the extension. (Take a look at the top photo of the living room above. There’s the window, but where’s the door?) 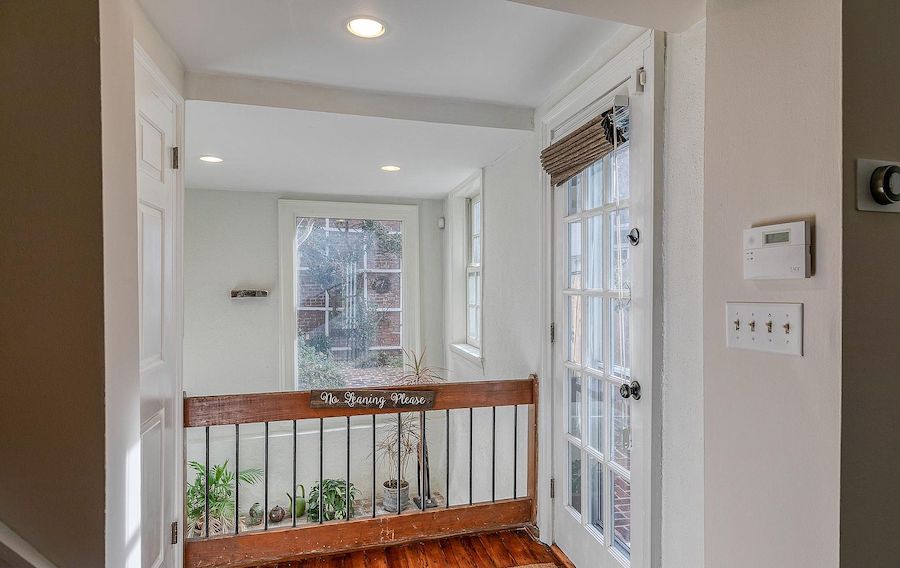 For another, there’s no room on the first floor of the extension. Instead, a large single-pane window lets light pour into what has become a two-story-high atrium that both provides light and a view of the rear patio to the living room and opens up and enlivens the dining room below. 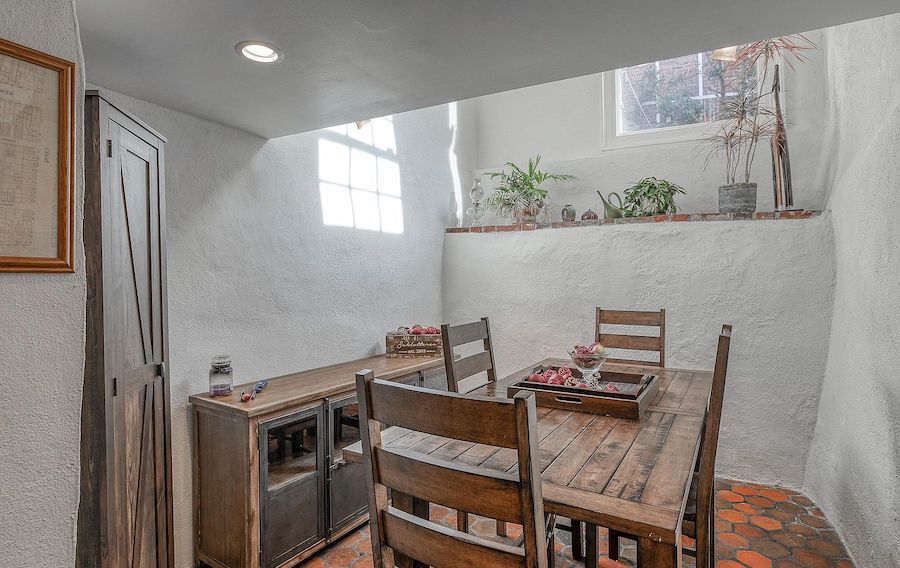 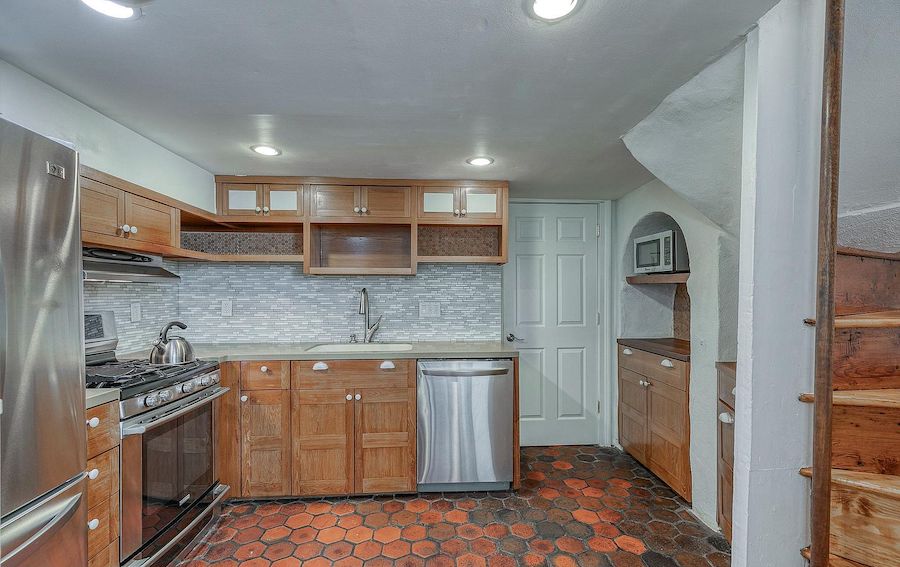 The dining room in the basement is one with a handsome grotto-like kitchen, outfitted with rustic custom cabinetry, a complementary tile floor and up-to-date stainless-steel appliances. 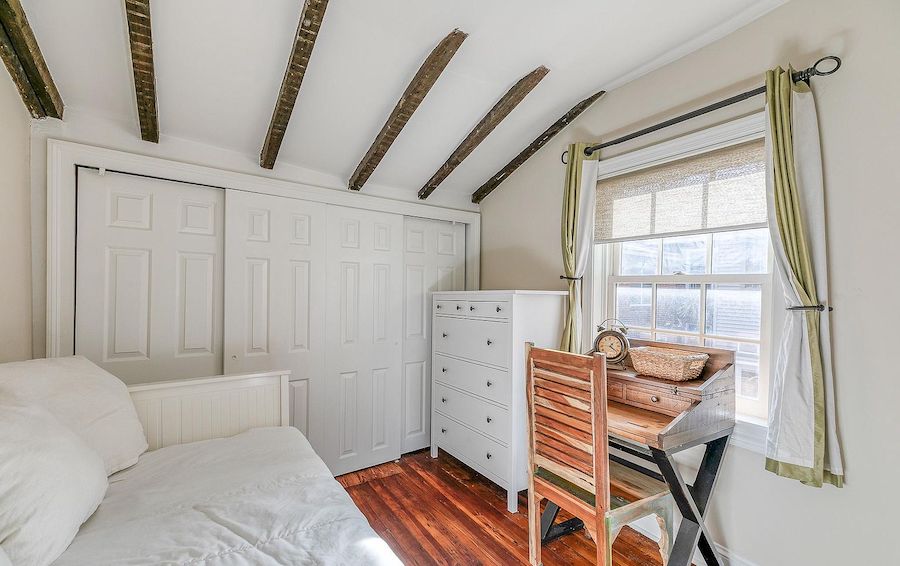 The addition’s second story contains the house’s third bedroom, which has a partially beamed ceiling and hardwood floors that mimic those in the original house’s primary bedroom. 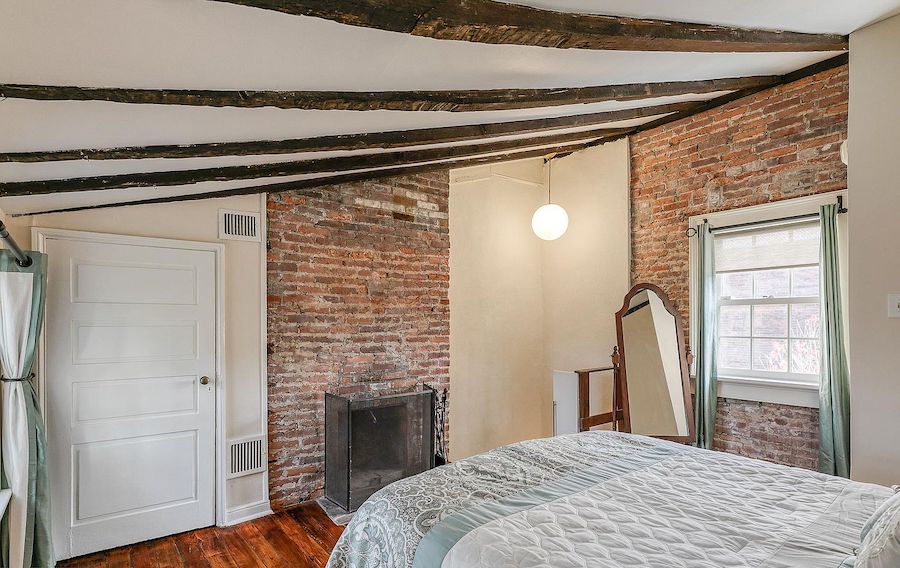 That bedroom has a vaulted ceiling with rough-hewn beams and lots of exposed brick, both on the rear wall and around the fireplace.

All three of the original house’s rooms have full-height brick fireplaces, including the second-floor front bedroom that’s currently used as a home office. And all of them work, too. 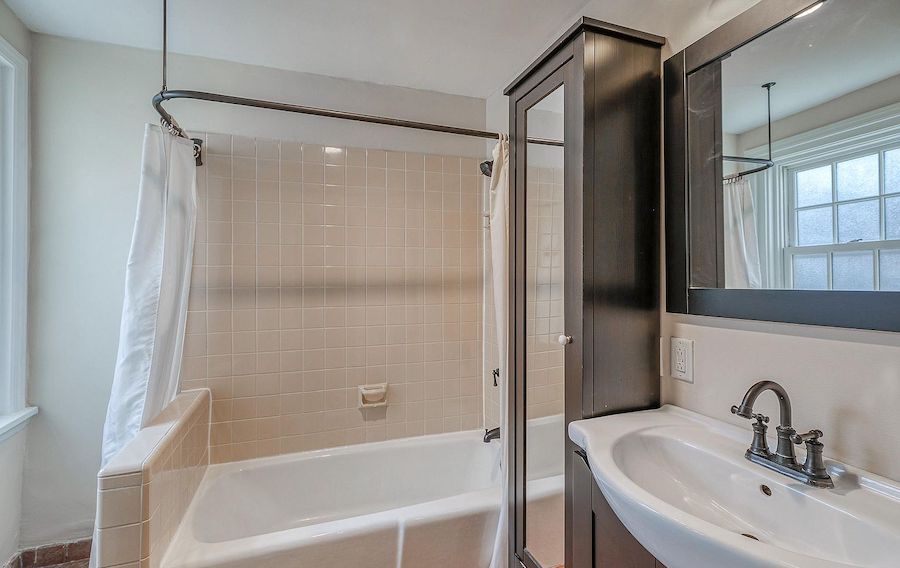 There’s a modern full bathroom between the bedrooms on the second floor and a half bath in the basement off the kitchen. 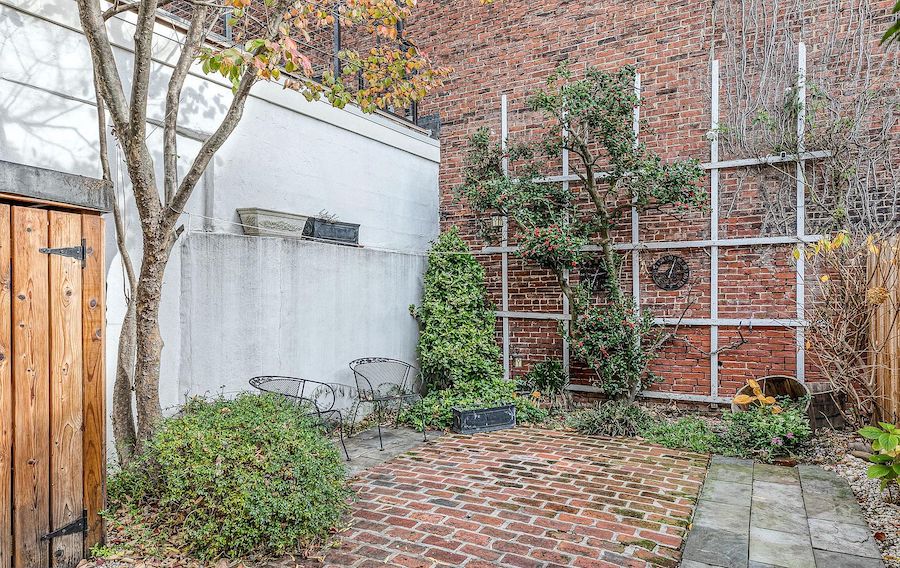 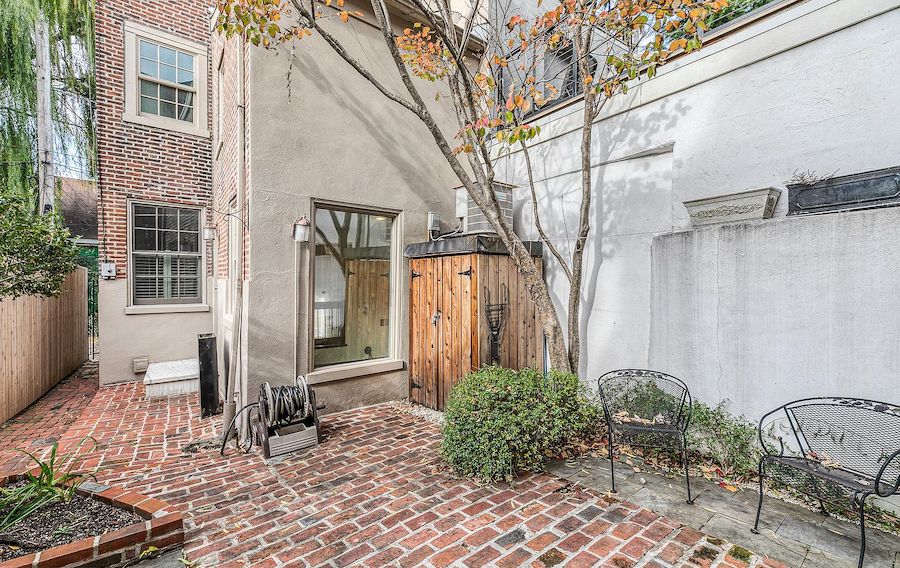 And finally, there’s a spacious brick patio in the back.

This little trinity, then, got the royal treatment, as might befit a house in Queen Village. And while real royalty would live in someplace much more palatial than this, this Queen Village expanded trinity house for sale is certainly several notches above “workforce housing.”

OTHER STUFF: This house also has historically accurate low-E windows and a newer climate control system. And even though it’s on a very quiet street, it’s just steps away from a host of great restaurants and coffee shops, a convenience store and high-end deli, a park and dog run, and the Delaware waterfront.