Even though it has only two stories, this handsome house was anything but a “workingman’s” house. A recent makeover preserved its basic character with just one minor hiccup. 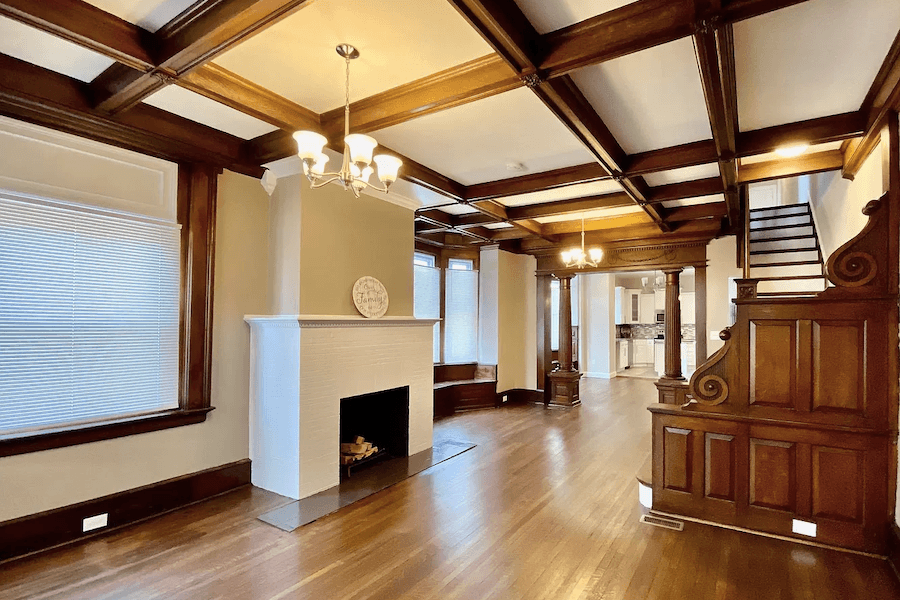 The rehab may have been base-model, but there’s nothing basic about this very elegant and very roomy restored twin house at 501 E. Tulpehocken St., Philadelphia, Pa. 19144 | Bright MLS images via ArchStone Realty

As you are probably aware by now, developers’ boot camps run by the Jumpstart Network have unleashed a wave of small-beer rebuilders upon neglected Philadelphia neighborhoods, restoring their homes to (often) better-than-original condition and making those neighborhoods nicer and better places to live in the process.

Nowhere has their presence been noted more than in the neighborhood where Jumpstart got its start, Germantown. Hundreds of houses in the city’s second-most-historic neighborhood have been transformed by startup developers working with the basic tools Jumpstart offers.

But after a while, one notices that the houses often tend to look alike on the inside. Gray paint, white trim, Shaker kitchen cabinets, modern stone-tile bathrooms — yes, they’re not terribly expensive to execute, and that makes them attractive to rebuilders who want to sell the houses they reboot in these neighborhoods for prices the market will bear. But sometimes opting for something just a little different will make a house stand out — and maybe even fetch a better price. 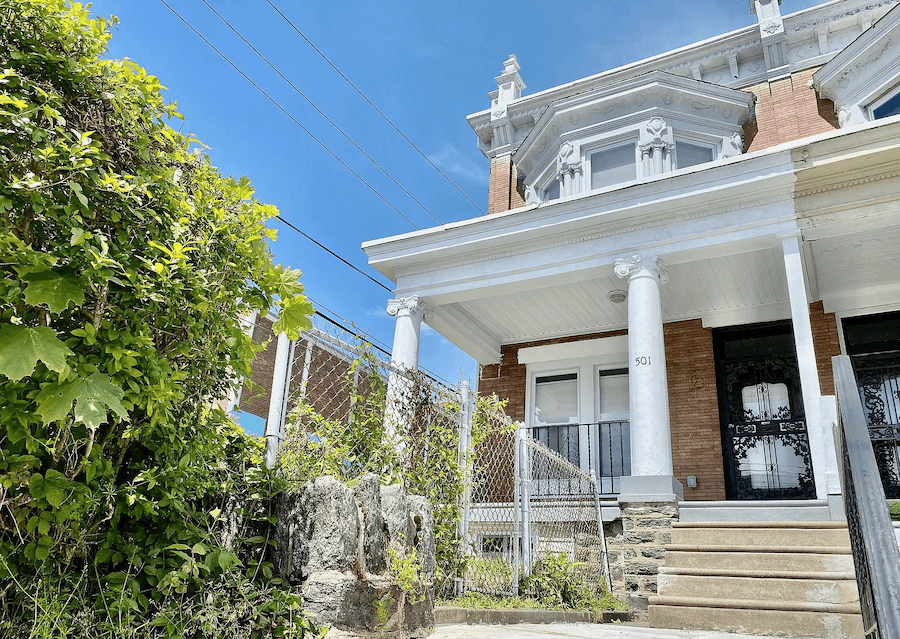 While we do not know whether or not the person who restored this rehabbed Germantown twin house for sale is a Jumpstart alum, this house stands out because its developer was smart enough to recognize that they had a gem on their hands and opted to restore its coffered ceilings and detailed woodwork. And by and large, their makeover restores the house’s original splendor. But in a few places, it shows the limitations of the basic toolkit many local rehabbers use.

Again, this is one of those houses that virtual staging would make look worse. One look at the elegant detailing and trim on the main floor should make that clear. 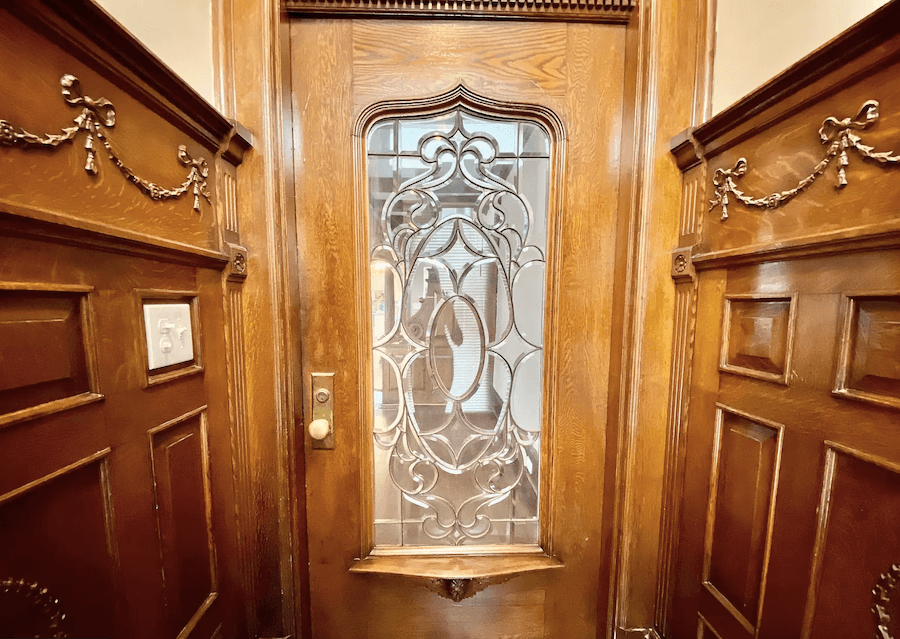 While the listing agent’s description of this place as an “estate home” strays a bit far from reality, it is true that this house was not designed for ordinary working stiffs. Even though it has only two above-ground floors, it has an abundance of space and a level of trim aimed more at a large middle-class family of the early 20th century. 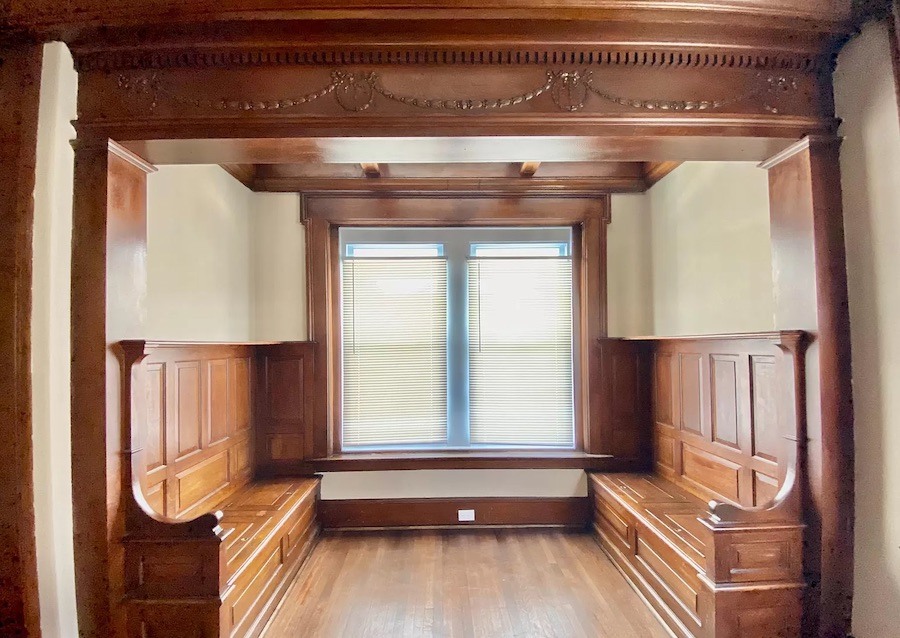 This house too is aimed at today’s middle class. It was a pioneer of the open floor plan decades before such layouts became ubiquitous. Yet well-placed elements still distinguish the reading alcove from the living room on one side of the central arch and the dining room from the kitchen on the other.

One of those elements, however, would complement the rest of the main floor better had the rehabber discarded the basic tools and used just a little more imagination. 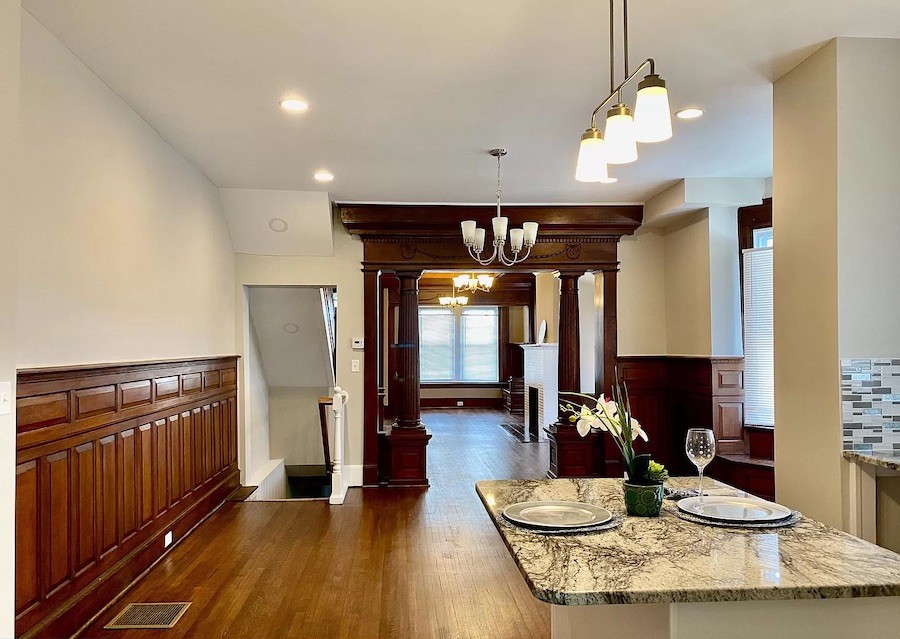 That element is the kitchen, which is one with the dining room. The dining room’s medium-brown oak wainscoting and cream-colored walls extend all the way into the kitchen — where they clash with the white-and-gray color scheme. 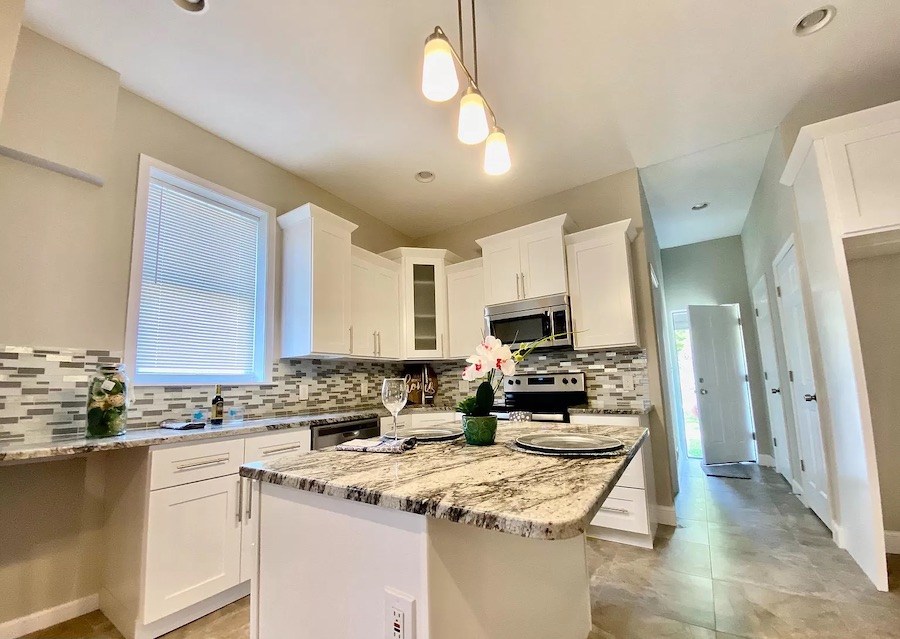 Yes, white and gray are neutral colors that go with almost anything. But put them in an elaborately decorated cream-and-brown space and they stick out instead.

Had the developer simply opted for medium- or even chocolate-brown Shaker cabinets and black granite countertops instead, this kitchen would harmonize much better with the rest of the main floor. But that minor slip-up will probably fade into the dustbin of memory as you prepare meals in this well-equipped modern kitchen. (So too will the similarly clashing white crown molding on the living-room fireplace’s mantel and chimney.) 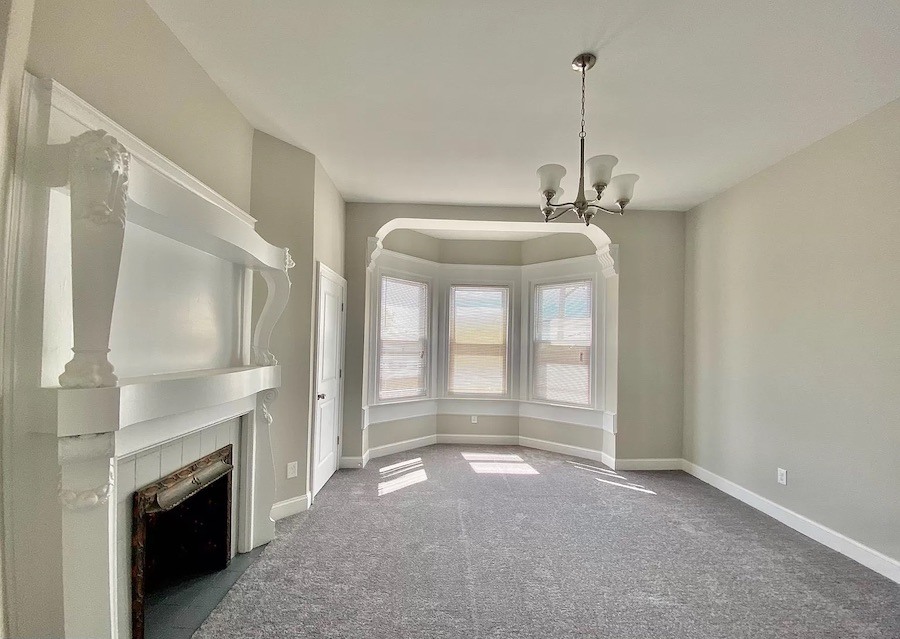 The four upstairs bedrooms got redone using the basic toolkit, and while one wonders what might have been had they attempted to refinish rather than repaint the master bedroom’s trim and its fancy carved fireplace mantel, the rehab job still preserves the room’s character. 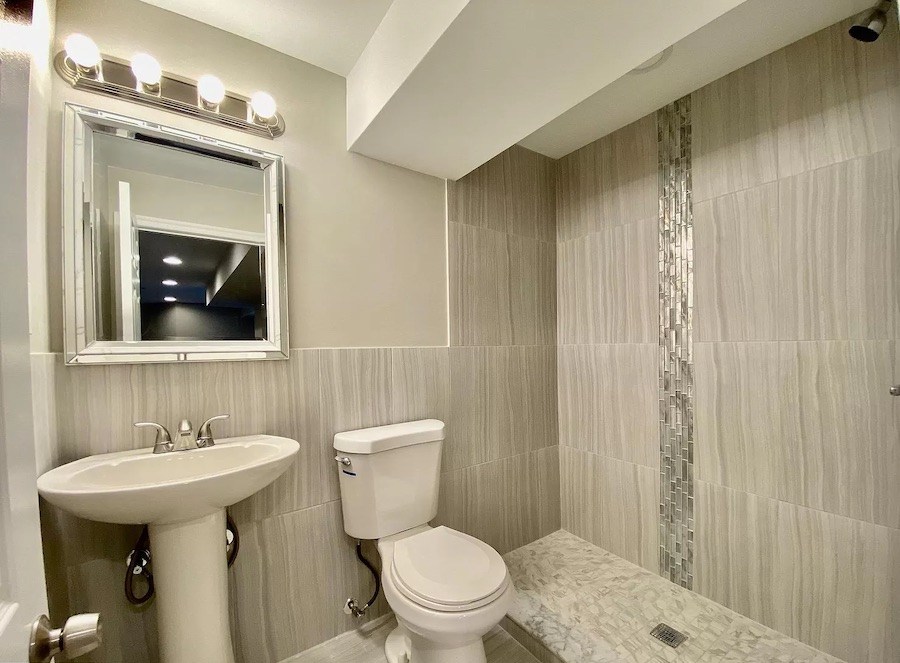 The bathrooms, on the other hand, have gone the full contemporary route.

This house also enables one-floor living thanks to a fifth bedroom at the rear of the main floor, and with two more bedrooms, a full bath and a living, media or entertainment room in its finished walkout basement, it also offers convenient guest quarters or an in-law suite. 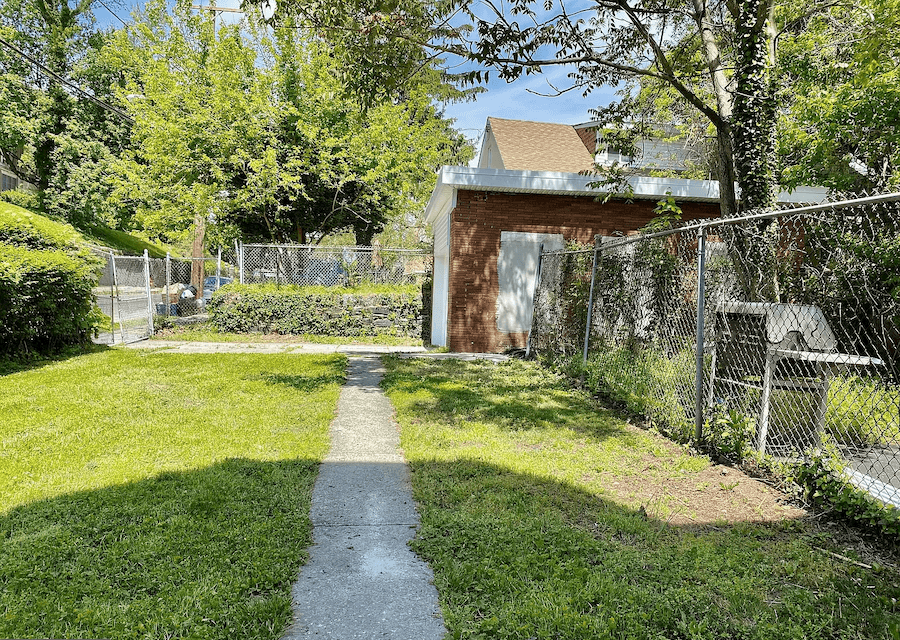 And this rehabbed Germantown twin house for sale also offers a convenient location in Germantown’s Morton section. Roosevelt Elementary School lies directly across the street from it, and four blocks down the hill, you will find a Save-a-Lot supermarket, two SEPTA bus routes, Wissahickon Charter School and Washington Lane Regional Rail station. On the other side of the train tracks lies the historic Awbury Arboretum, a totally free oasis in the middle of a city neighborhood that’s open for you to enjoy even now.

Given all that this house offers in terms of space, style, comfort and location, it seems a bit churlish to complain about a clashing kitchen. But when a rehab goes so right in so many ways, the way it didn’t becomes more noticeable. Besides, the care taken in restoring the rest of the house to its original glory should more than make up for it.

OTHER STUFF: This house also comes with a detached one-car garage and room to park two more in its driveway. The listing agent and the seller are related.