Want proof that recycling pays? Take a look around this beautiful country estate house that was imported from the early 19th century in 2005. 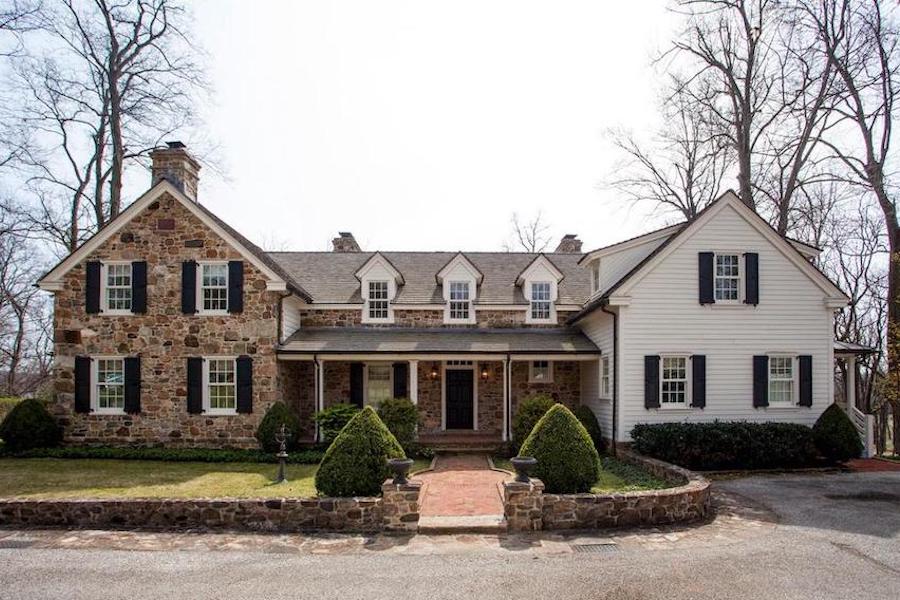 Built in the 21st century for the way we live now, a good chunk of this classic Colonial farmhouse has been imported from the 19th century to this expansive 6.4-acre lot at 2323 S. Chester Springs Rd., Chester Springs, Pa. 19425 | Bright MLS images via James A. Cochrane, Inc.

In some American cities, everyone prizes the new, the latest, the cutting-edge. Maybe it’s because, in places like Phoenix, the cities in question were barely crossroads as recently as a century ago.

The Greater Philadelphia region is not one of those places. Instead, taking a page from the historic preservationists and Jane Jacobs, we value the past and are constantly coming up with ways to reuse it. We’ve been around long enough now that we don’t have to “search for a usable past”; we have one all around us in abundance.

The way we typically reuse our past is to take some old building and retool it for new uses or changed tastes. That Rittenhouse Square townhouse for sale we featured here recently is a good example of recycling an old building to adapt it to modern life.

This neocolonial Chester Springs farmhouse for sale reuses the past too, but in a dramatically different manner: It imports the past into a house that looks about 200 years older than it is but is totally modern in its layout.

You’ve surely seen houses like this one scattered all over Bucks and Chester counties as well as the Main Line and Brandywine country. They’re a signature of our region and highly prized. So when Peter Zimmerman Architects and builder E. C. Trethewey III Building Contractors teamed up to produce this 21st-century farmhouse in 2005, they incorporated materials scattered all over the region into it.

The fieldstone on its exterior comes from a 19th-century house and barn in Historic Yellow Springs just down the road. The bricks come from various sources in Philadelphia. And throughout the interior, you will find all sorts of original 19th-century architectural details: Wainscoting, a Federal staircase, doors and random-width flooring salvaged from the circa-1817 Hoch-High Farm at Poplar Neck, near Reading. Flooring recycled from an early 1820s tavern in Lititz and a 19th-century house in West Chester. See if you can spot these features as you look about this totally 21st-century house. 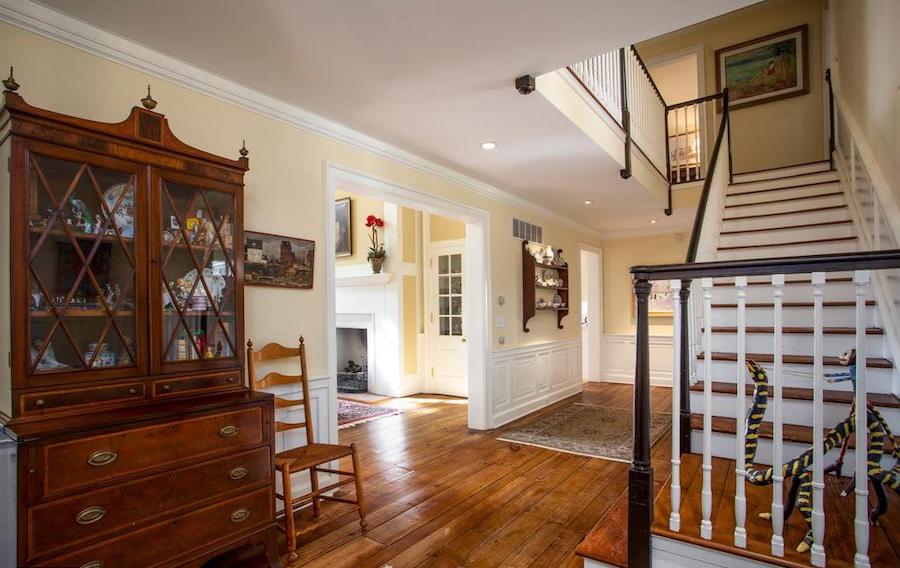 Its modern character should become evident the moment you walk in the front door. Instead of a central foyer with rooms on either side, this house’s foyer spans the width of the central wing. It connects the kitchen on the one side with the family room and first-floor master suite, another modern creation, on the other. 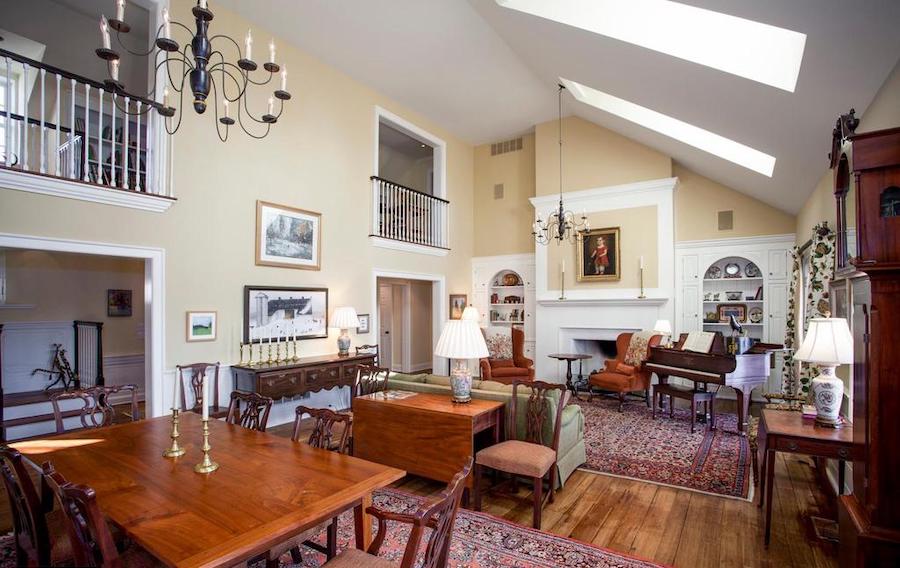 Two large archways lead from it into another modern space in traditional dress, the great room. Like the foyer, it too spans the central wing; its vaulted ceiling also rises the wing’s full two-story height and makes the second-floor dormers function like skylights. Fireplaces at each end anchor the living and dining areas, and balconies look down on it from the second-floor hallway, which you will see in a little bit. 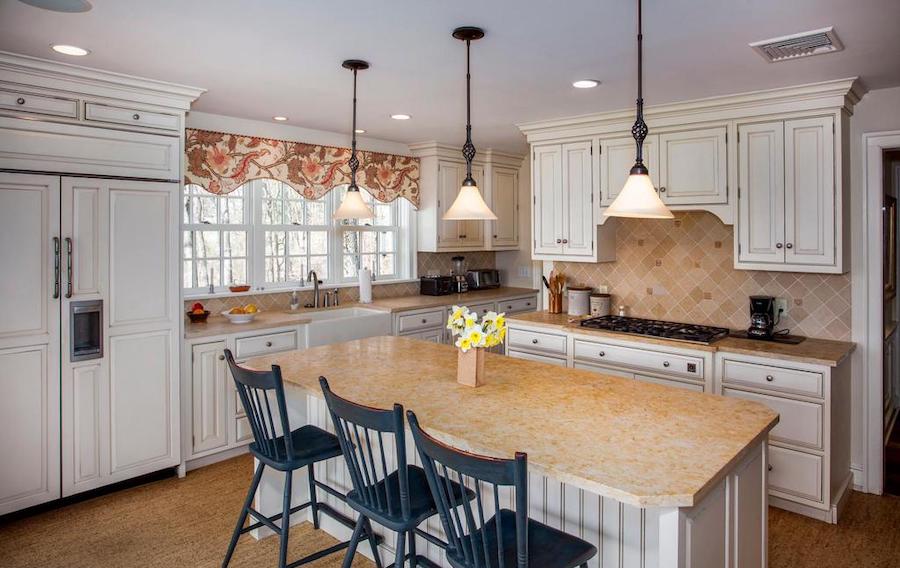 The kitchen and the attached casual dining porch also look like they’ve been around for a while, but the modern appliances and island should clue you into the space’s true age. 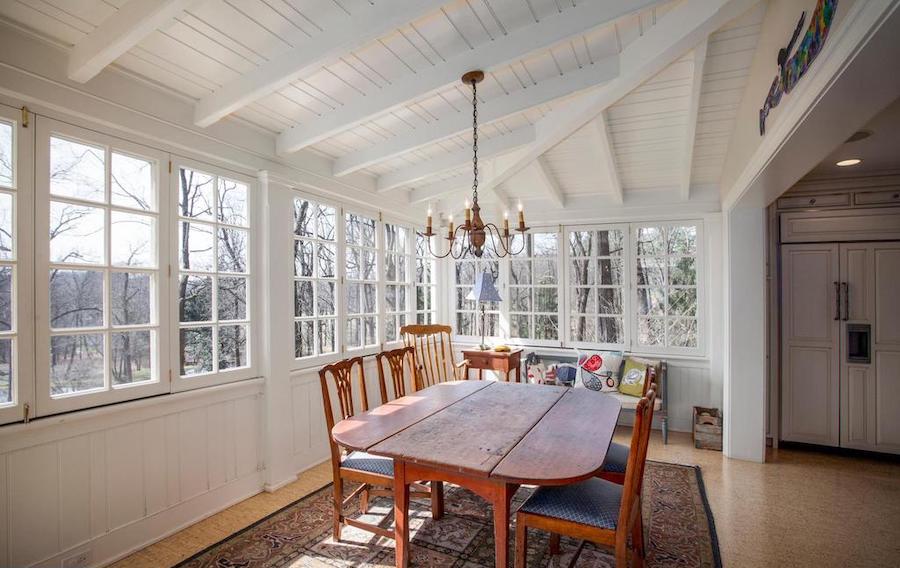 The casual dining porch disguises its youth a little more effectively. It also looks out on this house’s expansive 6.4-acre grounds. 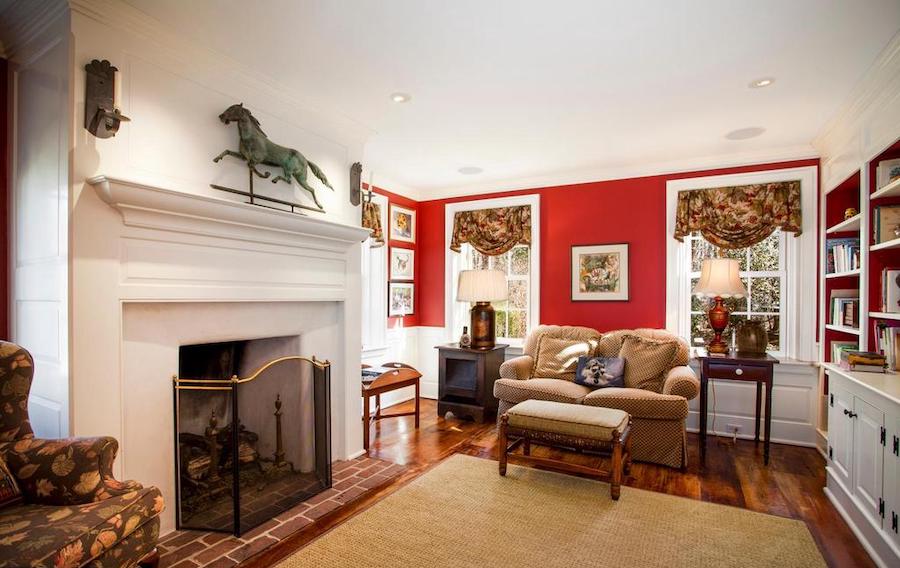 The family room’s built-in bookcases and cabinets, fireplace and wall colors are as faithful to the period this house comes from as possible. 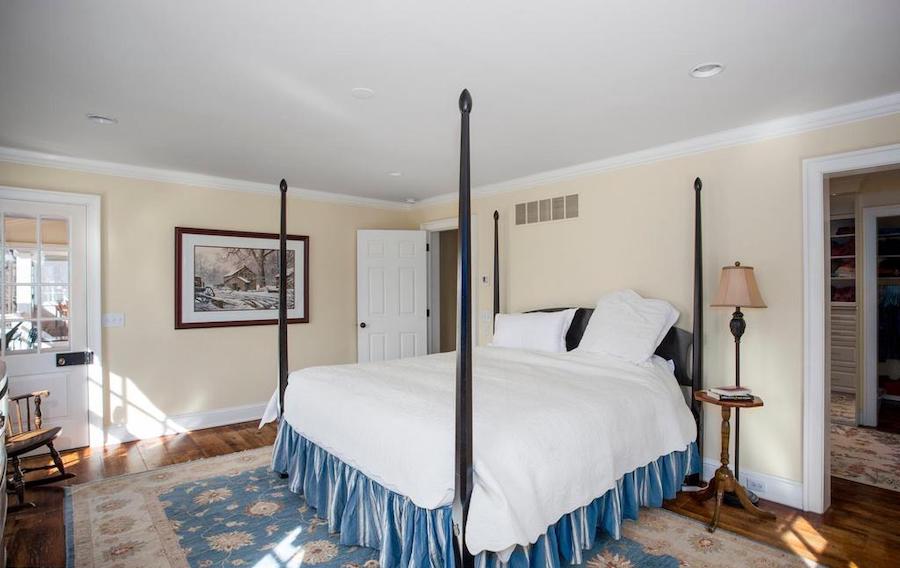 So, for that matter, is the master suite. 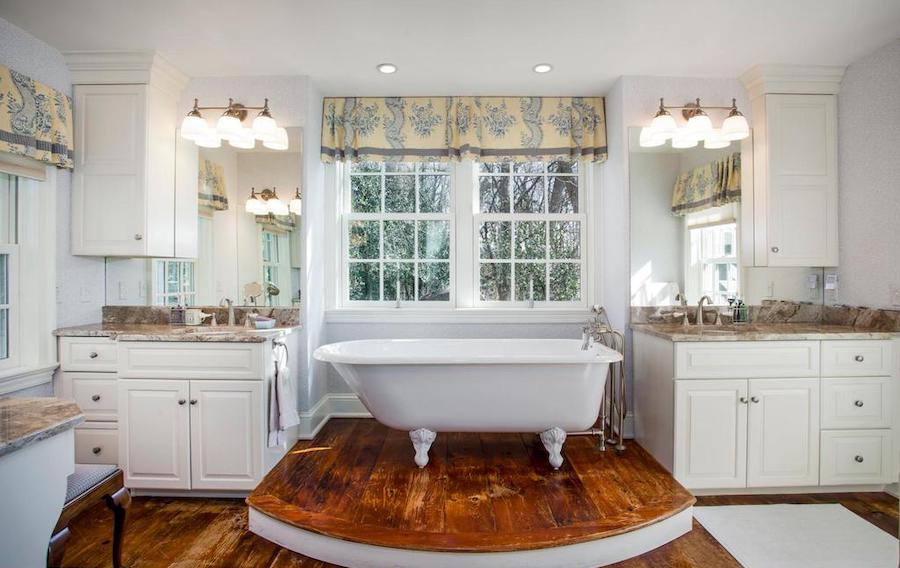 But the most vintage-looking item in its bathroom aside from its floor is actually a recreation of a classic: namely, the clawfoot tub between the two vanities. (It also has a glass-fronted shower stall.) 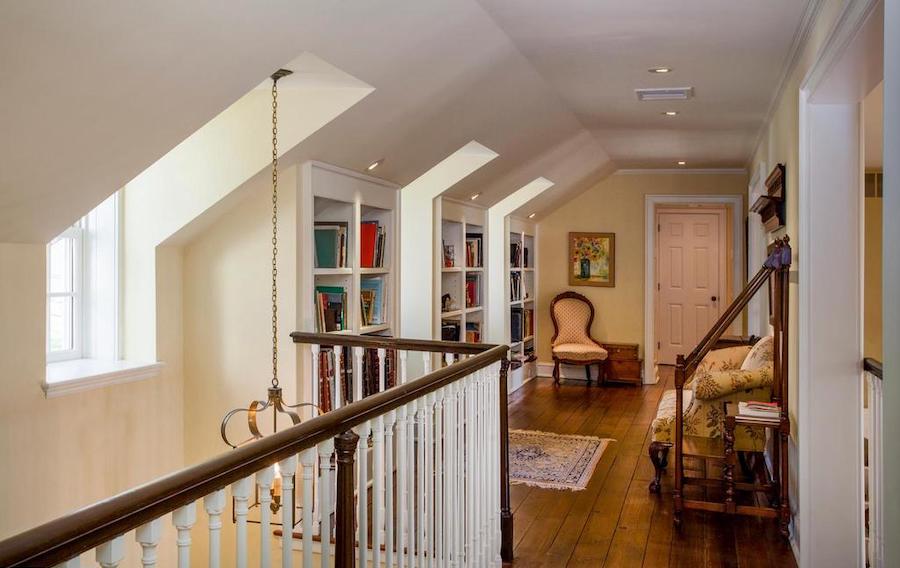 Another old-meets-new touch fills most of the second-floor hallway: Under the dormers you will find more built-in bookshelves that turn the hallway connecting the two pairs of upstairs bedrooms into a library and gallery. 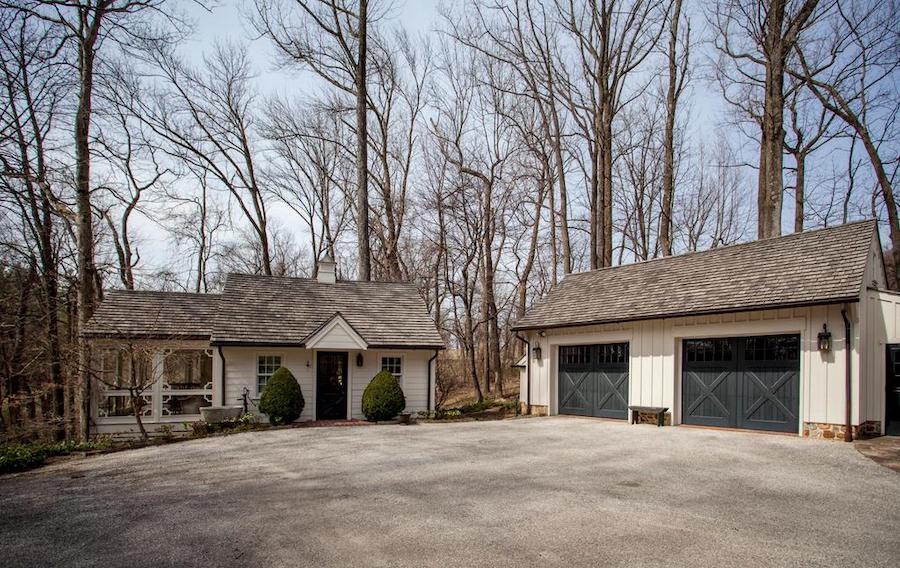 A detached two-car garage and a cottage studio complete the ensemble of buildings here. 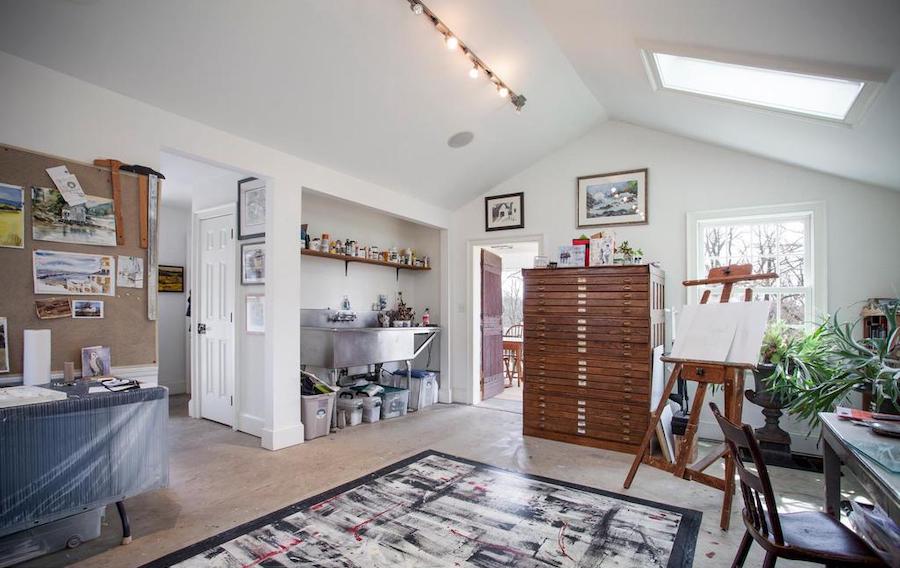 The cottage is outfitted for a visual artist and has a screened porch overlooking the sloping wooded grounds. 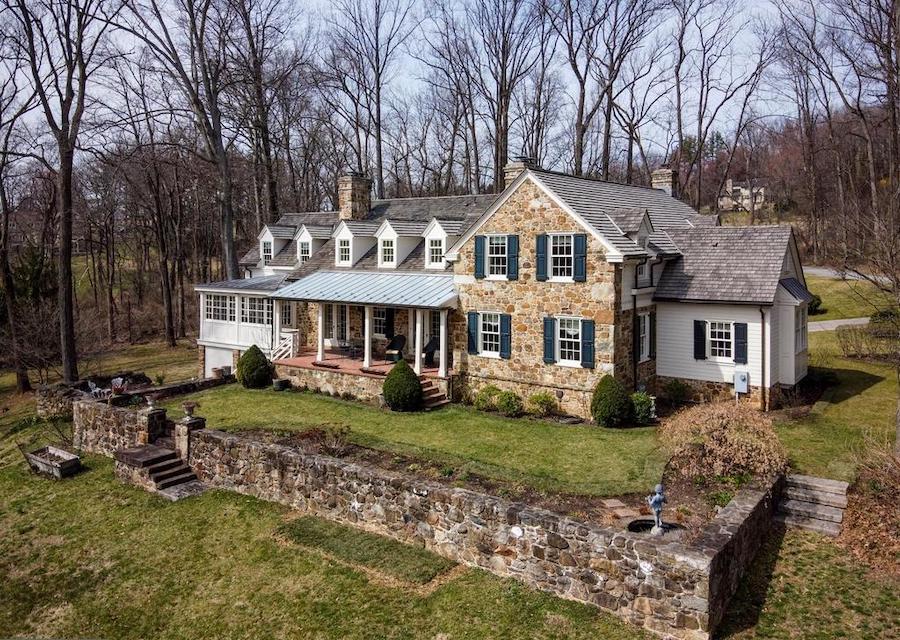 You can also view those grounds from the main house’s back porch and terrace. 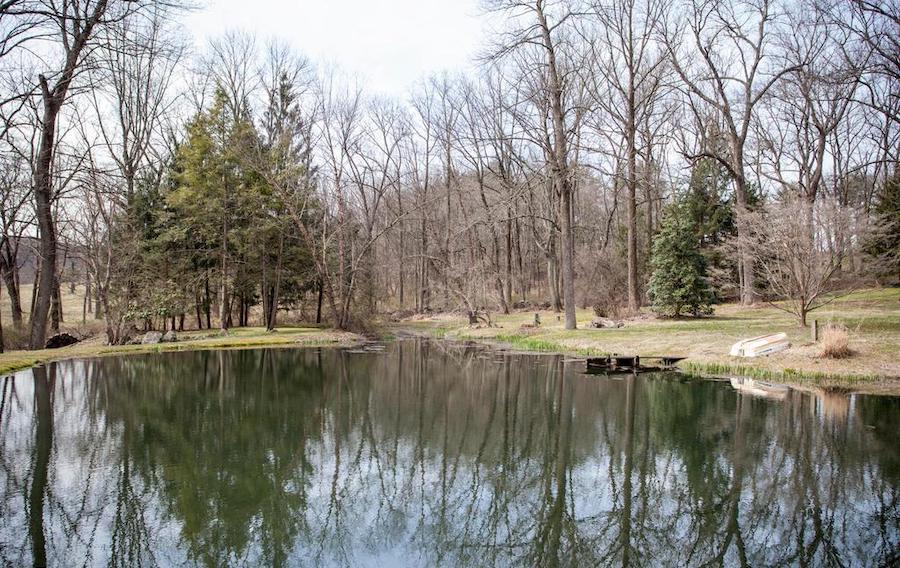 Your view includes plenty of perennial flowers, lots of trees and a very serene pond.

It also includes more architectural salvage, as the stones that form the walls come from the farmsteads mentioned above and the granite paving the paths comes from the streets of Philadelphia.

What do you get, then, with this blend of old and new? You get a tranquil country retreat at the end of a private lane. You get a house built for modern living that both channels and incorporates the past. You get space to let your creative juices flow. You get space to entertain on a grand scale, indoors and out. You get a location in the middle of countryside that is itself rich in history.

And you get further proof that it pays to recycle.

OTHER STUFF: An unfinished walkout basement offers plenty of storage space or can be finished to suit your desires.