On the Market: Hilltop Mansion Near Sinking Spring

Private retreat? Party palace? Live/work/play environment? This truly unique house northwest of Reading can fill all of these functions and then some. 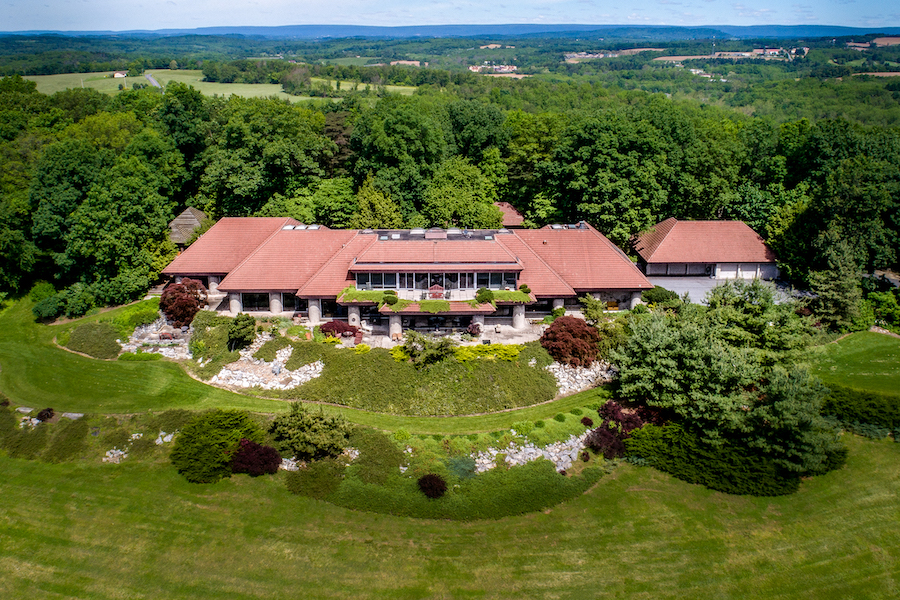 Berks County may lie within Philadelphia’s expanded metropolitan region — what the Feds call a “consolidated statistical area” — but it lies outside the area of focus of this magazine.

But if you work in northern Chester County — King of Prussia, say, or Exton, or Downingtown — the Sinking Spring area west of Reading actually lies within their commutershed. It’s just a couple of miles further from Exton than Center City Philadelphia is. 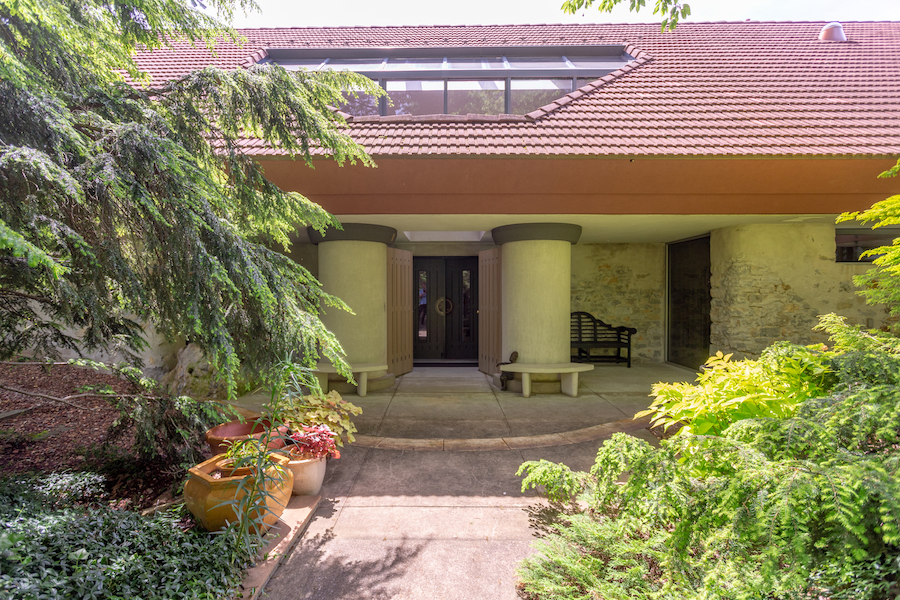 And once you take a look around this house for sale like no other I’ve seen in this region since, well, ever, I’ll wager that commute into the morning sun will look much better to you.

Or you might be able to simply telecommute to your job and enjoy the splendor of this one-of-a-kind residence all day. It includes a large room above its attached garage that makes a great home office.

At least that’s how the man who built it in 1987 and has lived here since then, Rolf Schmidt, uses it.

The head of a company that made surgical instruments, Schmidt and his wife were looking for a place to build a retreat. But not just any old private retreat. 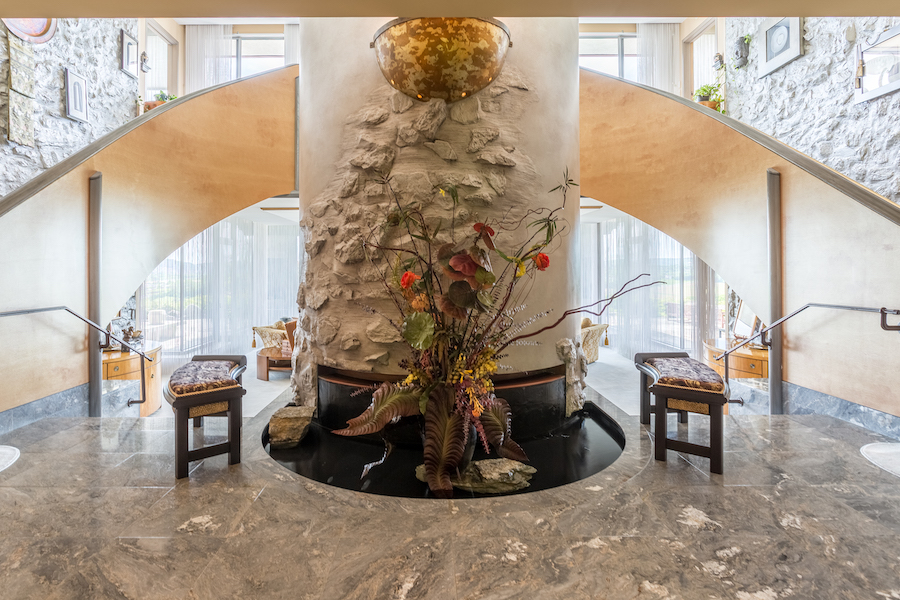 “We wanted a place where you could have two people sit in a corner and talk and have a coffee, or 200 people being catered to,” Schmidt says. “And we tested that on a number of occasions, and it works.”

But more than that, they also wanted a house that would stand up to the test of time. And they wanted a place that reflected his wife’s love of Japanese society and culture.

You’re looking at the result — a rock-solid mansion perched atop a 500-foot-high hill on a 75-acre lot in Lower Heidelberg Township that slopes down to the house’s east and south.

The limestone and brown shale formation that lies under this house’s topsoil is the rock on which Schmidt built this house. In one corner, it literally forms the foundation: architect Gregory Scott of Lancaster-based Reese, Lower, Patrick & Scott (RLPS Architects) incorporated one of the protruding rocks into the outer wall. 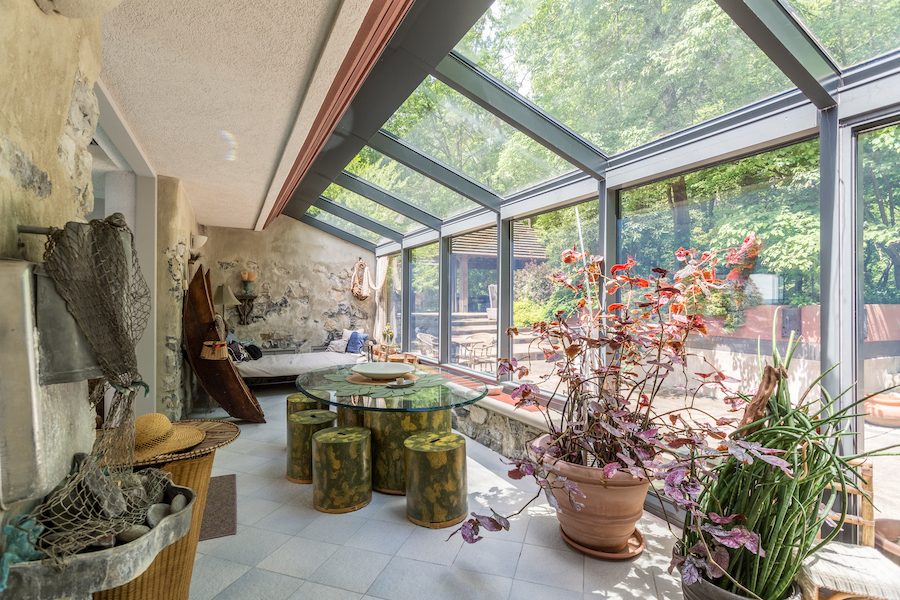 The rest of the house also looks solid as a rock. In many places, it is, literally: Schmidt also sought an architect and stonemason who could work with “parched stone” – smaller stones held together by mortar and partially covered with a ground-limestone cement that gives the walls a weathered look, like the wall at the end of the atrium next to the indoor pool.

“We drove all over Lancaster County and found a half-dozen parched stone houses” to show the stonemason Scott recommended how the wall should look, Schmidt says.

Schmidt found the stones that you see in that wall and several other places in this house in dairy barns that had fallen into disuse. Three such barns gave their lives to create this house’s stone walls and accents. 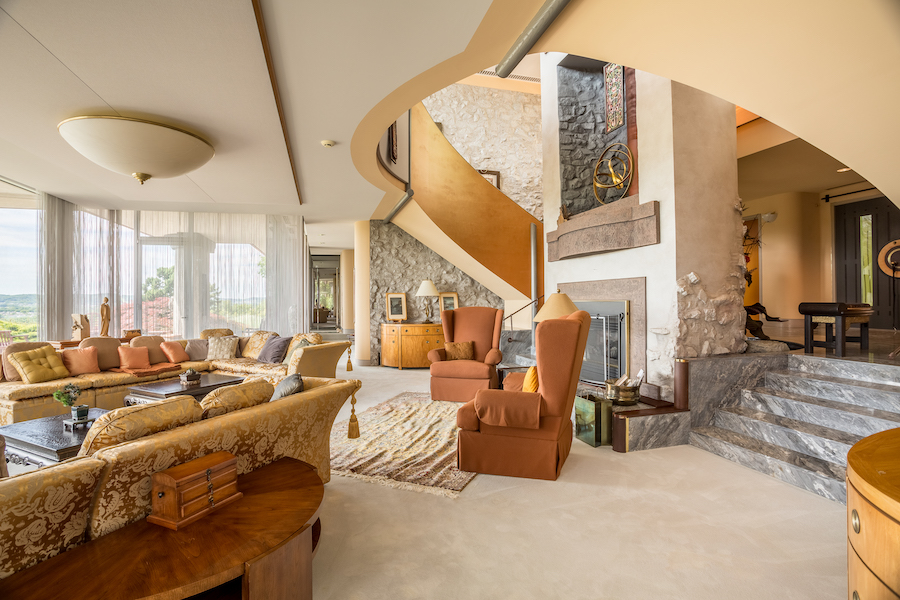 But in other places, what looks rock-solid is actually merely decorative. Those thick columns you see around the perimeter, for instance, are actually mostly hollow half-columns: a steel skeleton frame holds up this house, and it has no interior load-bearing walls. (Schmidt hired a commercial builder to build this house because of this.) 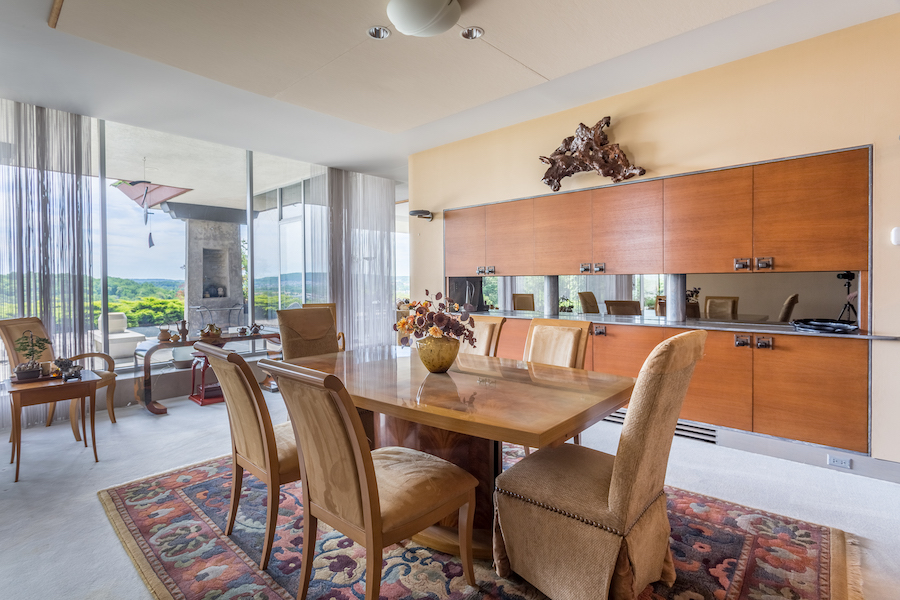 Inside, this house mixes elements of both Japanese and Moderne style. Most of the built-in cabinets, shelves and other woodwork, not to mention the grand staircase that greets you in the foyer, feature the smooth curves of that style that bridged the gap between Art Deco and midcentury modern. 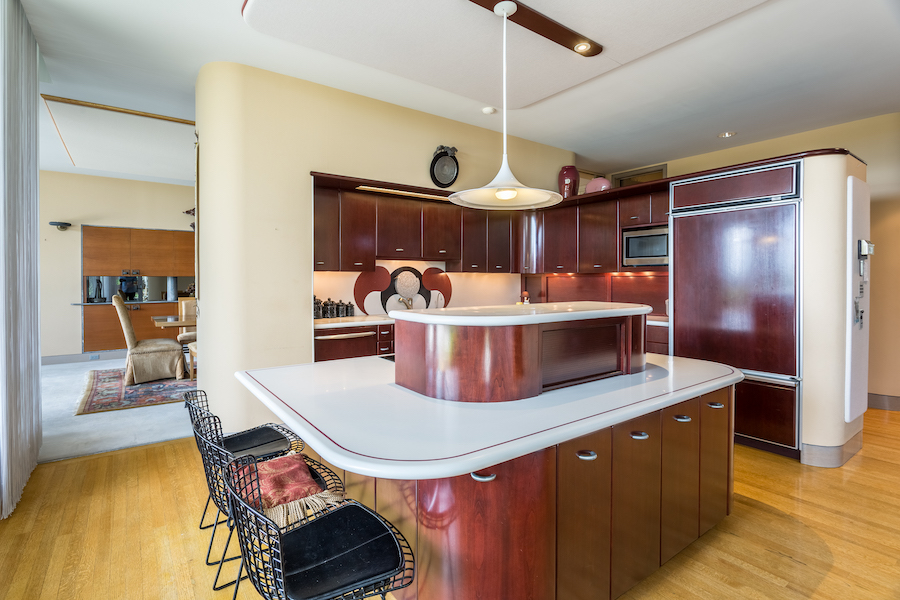 Yet this heavy house is also light as a feather thanks to the copious amounts of glass that frame its rooms. Floor-to-ceiling windows fill all the main floor spaces with light and offer views of the surrounding valleys and the creeping suburbia that’s gradually spreading over next-door Spring Ridge. 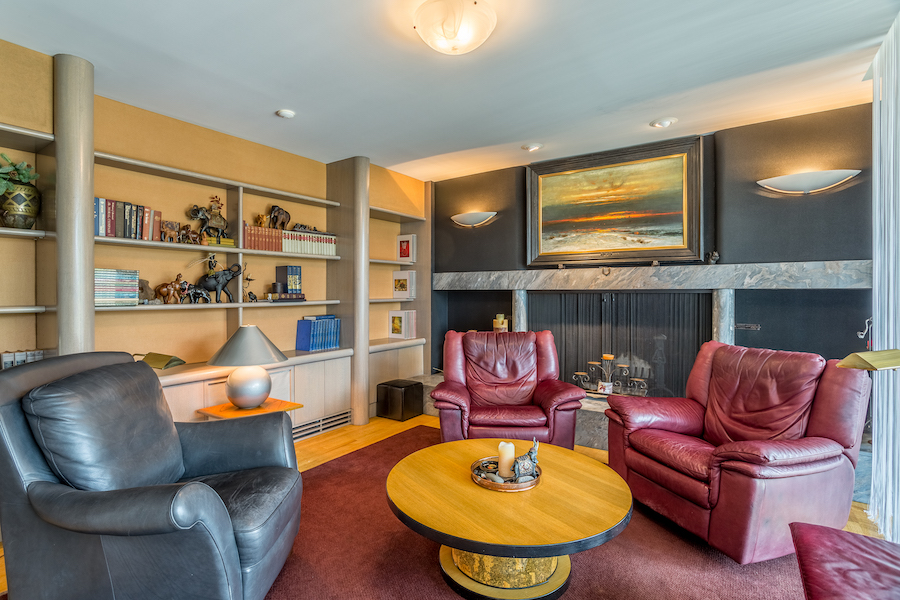 As the Schmidts desired, many of the main living spaces can do double duty, like the formal living room, the split-level dining room and the raised den on the other side of the kitchen from the dining room. 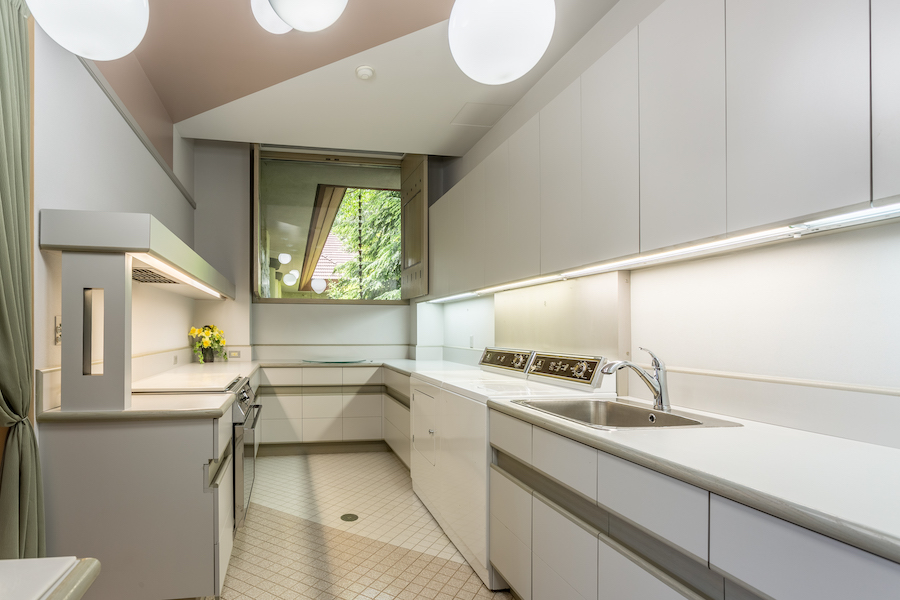 And the laundry room next to the kitchen doubles as a catering kitchen. A door leads to it from the attached garage, enabling the caterer to set up shop without having to walk through the house. 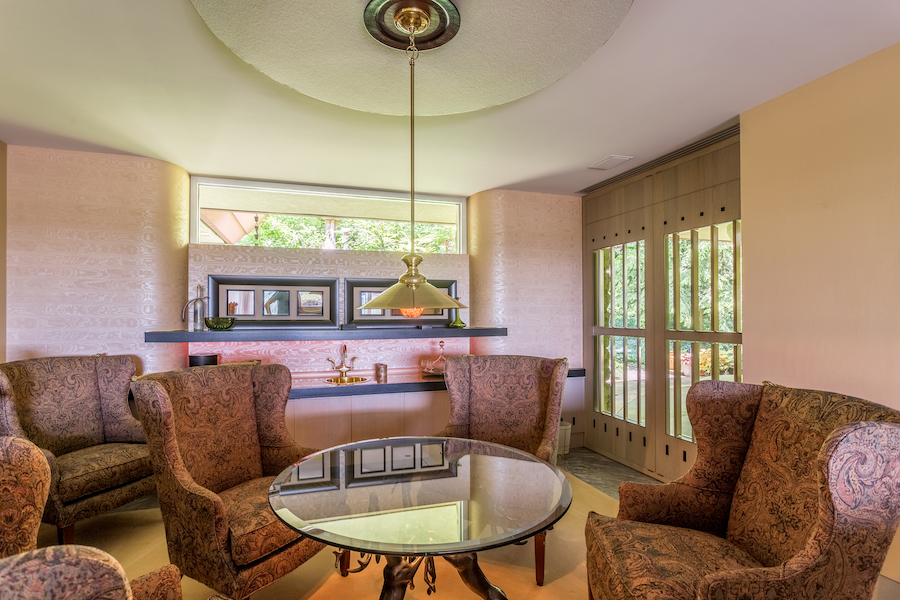 Still other spaces offer intimate entertaining options. These include the cocktail lounge with wet bar off the foyer and the stone-walled, beam-ceilinged rathskeller located under the foyer. 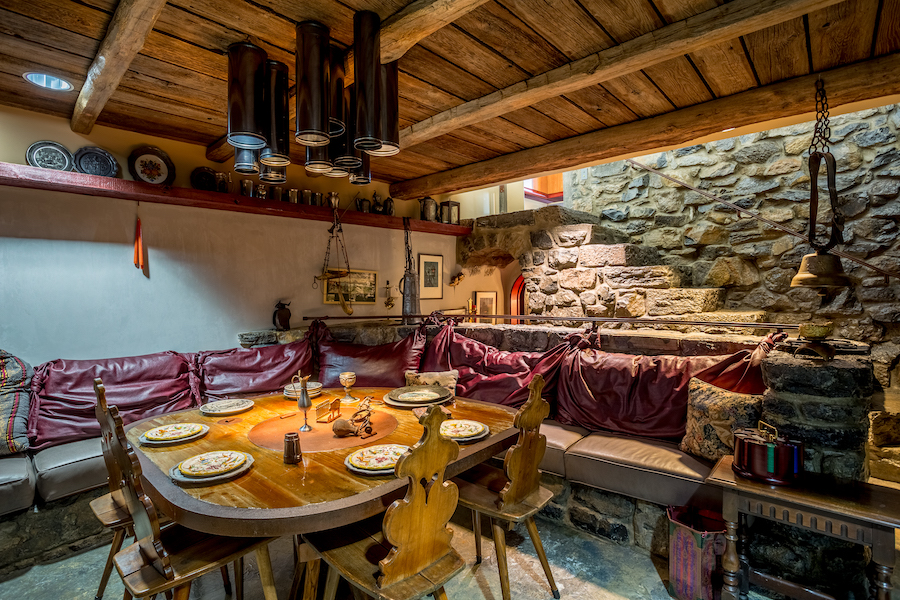 Schmidt and the architect used stovepipes to create the rathskeller’s distinctive central light fixture, and the table under it contains a fondue station heated by a gas line in its center. 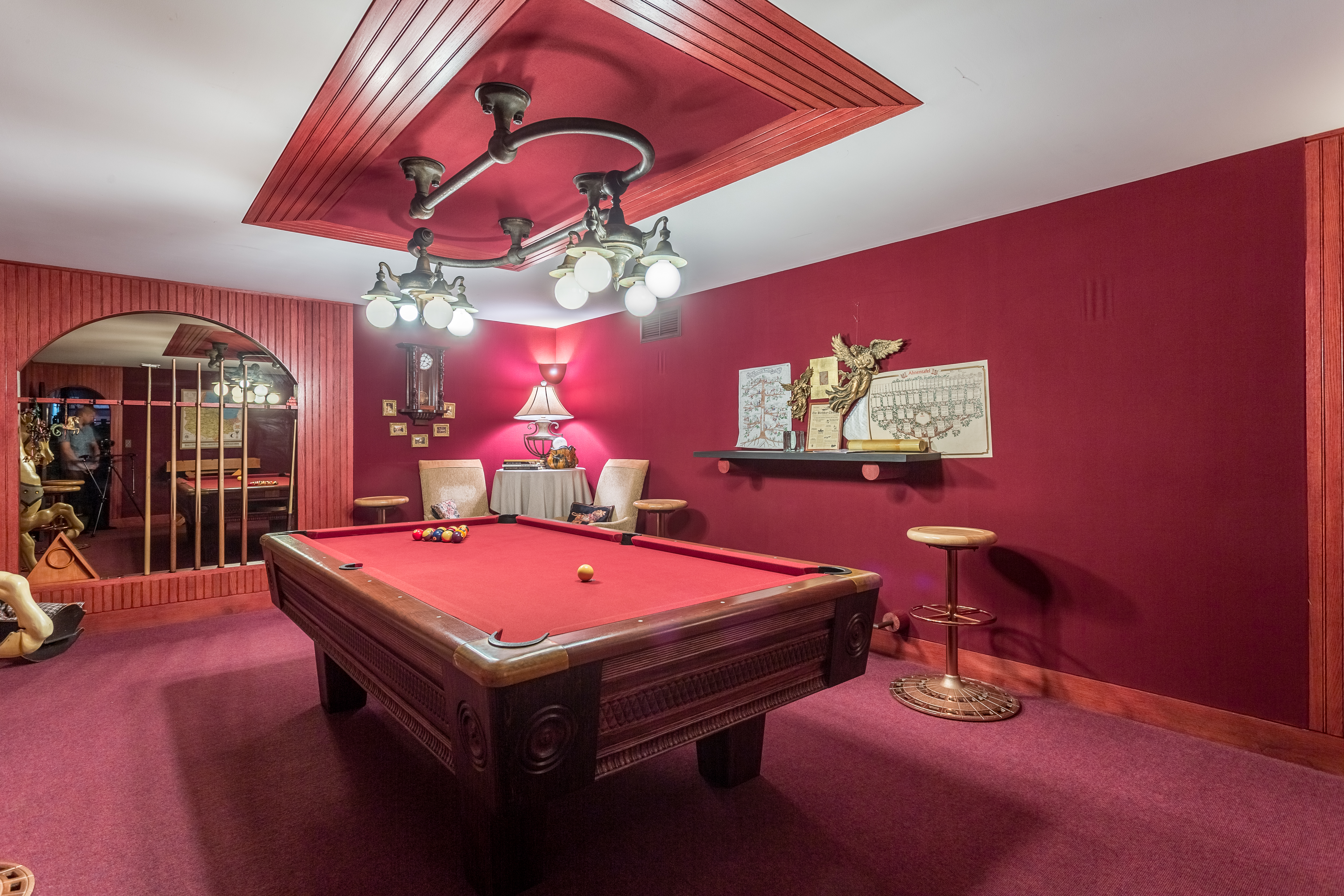 Unusual and distinctive lighting graces several rooms in this house. The lights over the pool table in the room next to the rathskeller, for instance, were taken from the walls of a power station that was being demolished near downtown Reading and turned so their lamps would face downward from the ceiling.

And what look like fluorescent lights in several upstairs rooms are actually “light tubes” that bring sunlight from above into the rooms.

There’s also a wine cellar in the house’s basement. The basement was actually an afterthought: Schmidt says that after the backhoes had done their work on the main house’s foundation, he realized there was no place to put the pool table, so back they came to excavate the subterranean grottoes.

And as the Schmidts wanted, this house is also equipped with plenty of room indoors and out to accommodate a crowd, not to mention the facilities to feed and house them. 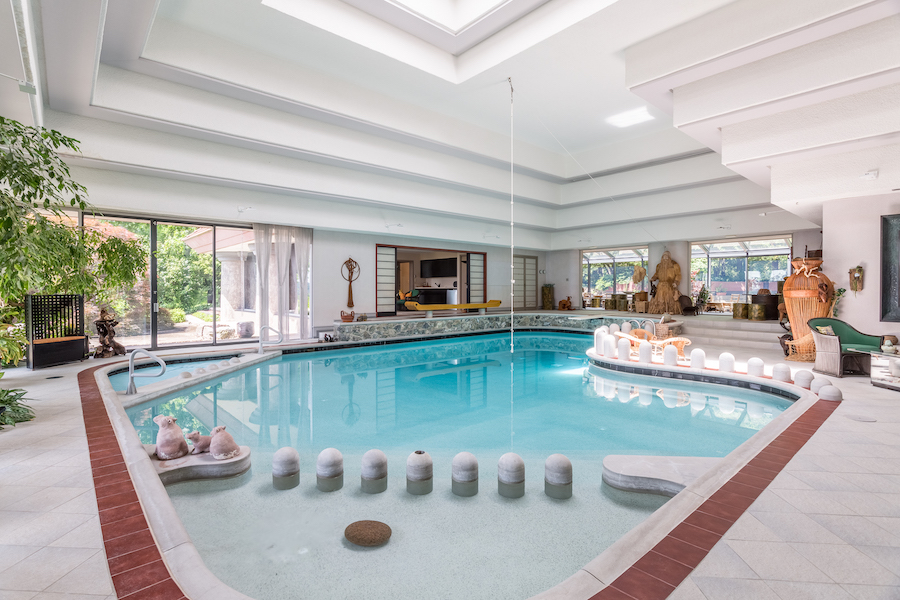 A large indoor pool separates the main wing of the main floor from a two-bedroom guest apartment. The pool is equipped with a rope swing, kiddie pool and hot tub. In addition to the atrium on one side, this pool also has a kitchenette tucked under the upstairs master suite and two changing rooms. And at one end of the atrium, you’ll find a sauna and gym space. 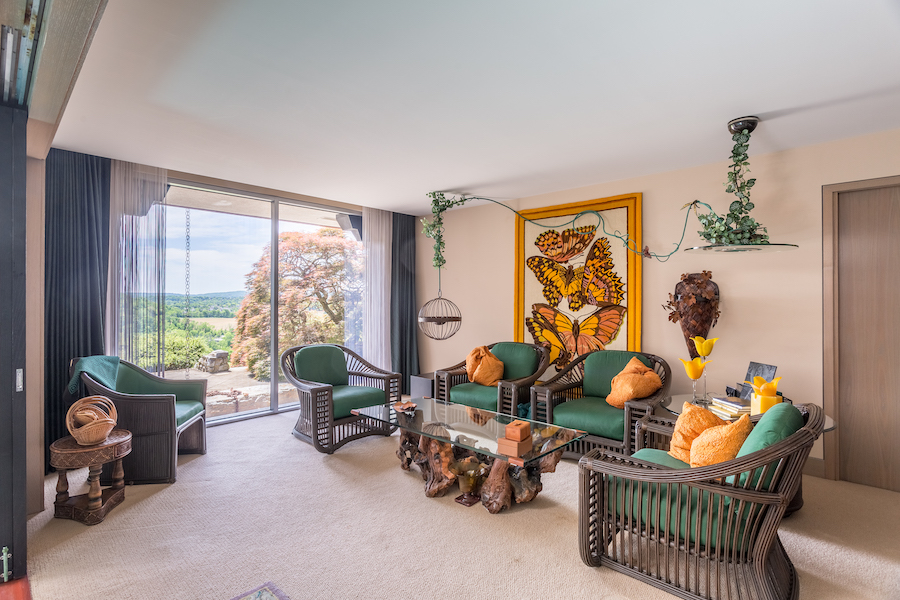 The guest suite has its own living room and kitchenette as well. Large folding doors allow it to be used as an anteroom to the pool if you’re having a pool party. 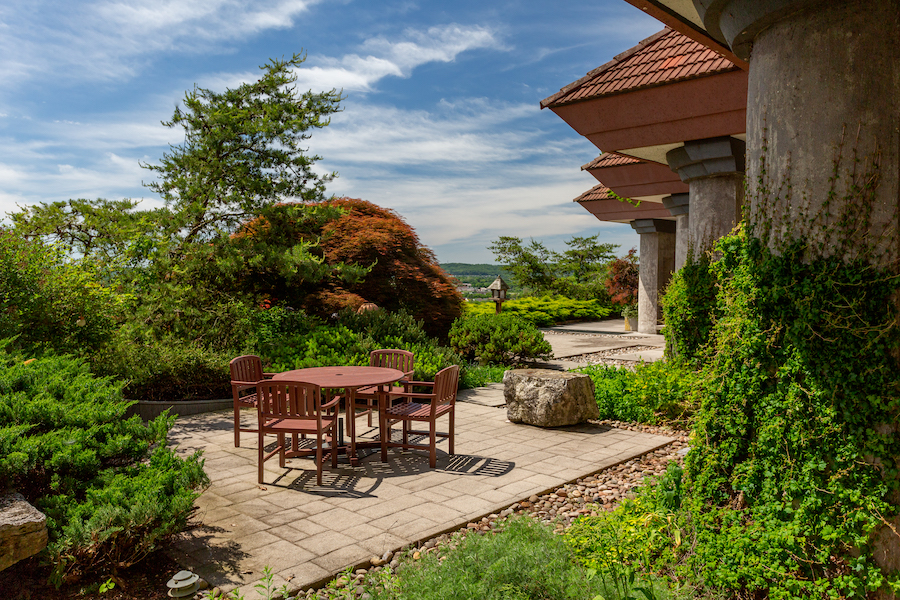 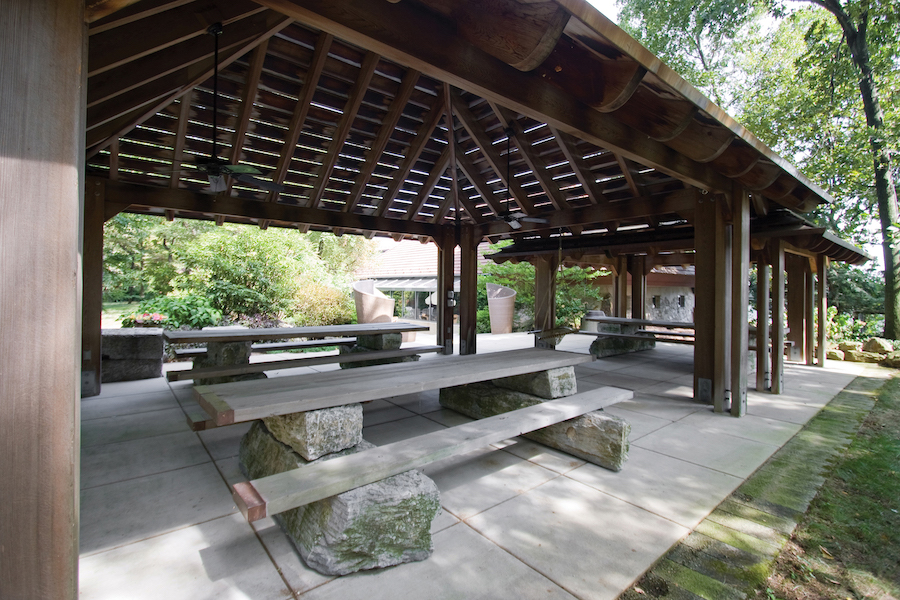 Picnic gazebo next to poolside atrium. The picnic tables are fashioned from local stone and reclaimed railroad ties

And all around the main floor are numerous terraces, courtyards and picnic gazebos. 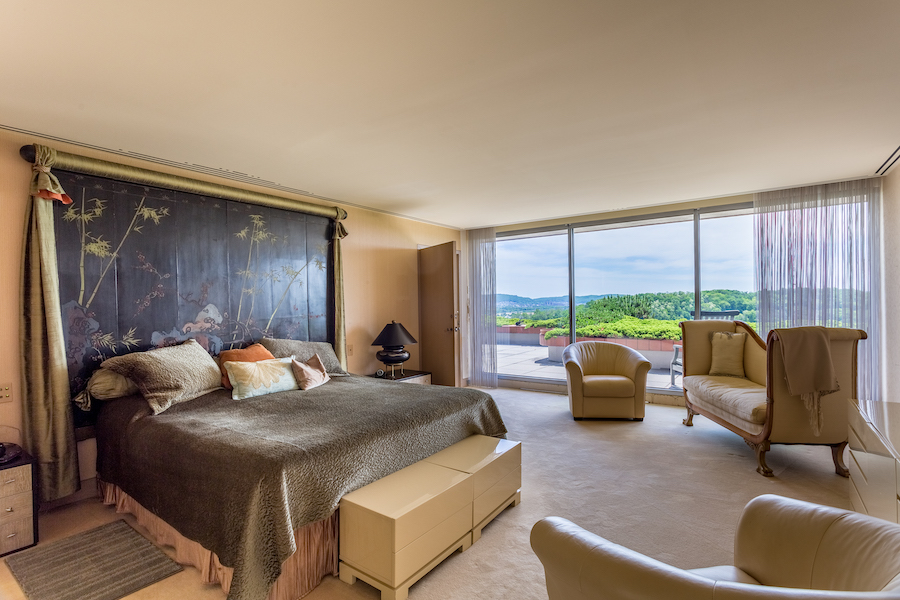 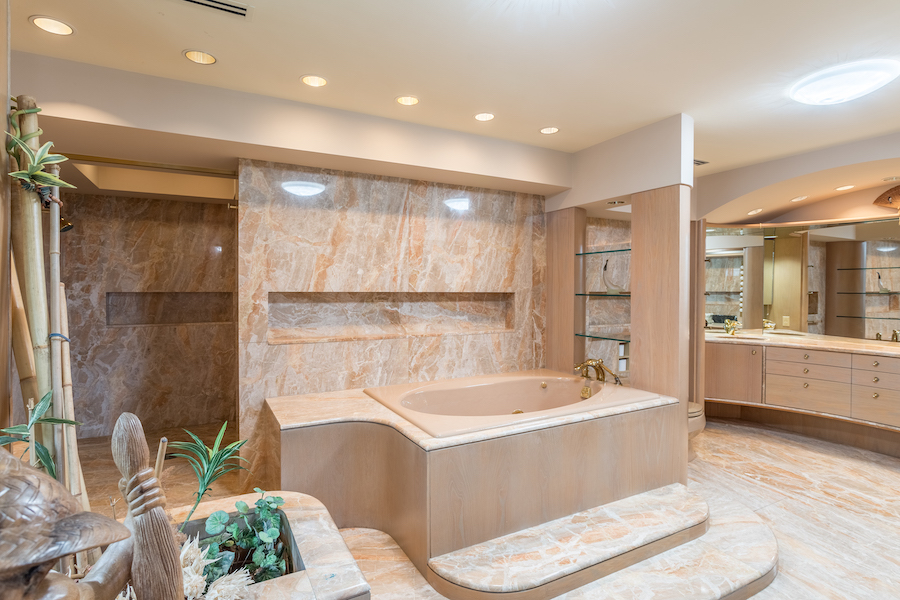 The upstairs master suite has a bedroom that overlooks the pool and a spacious bathroom lit by light tubes. Another atrium over the front door connects it to the guest suite on the other side of the foyer. 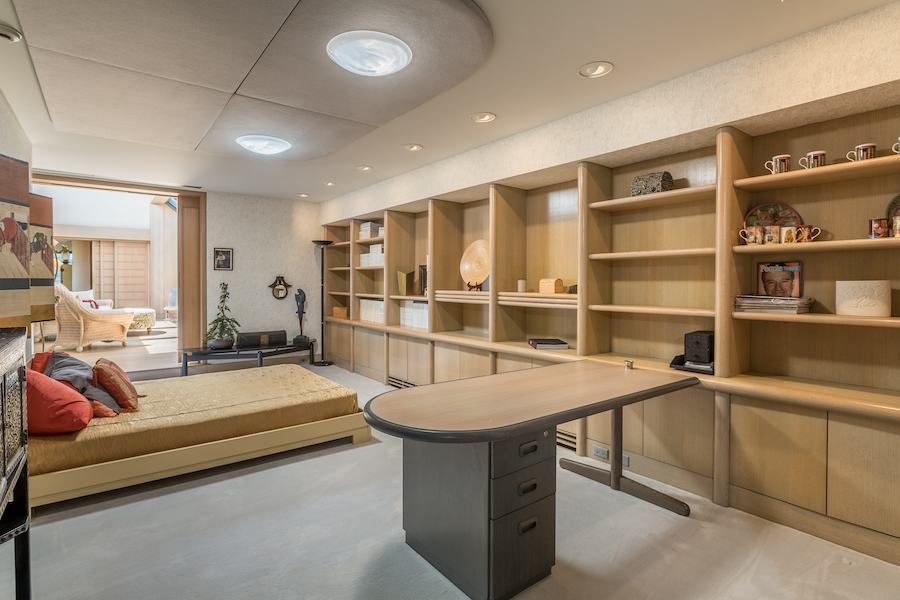 The upstairs guest bedrooms were combined into a single open space with two connected bathrooms in the center. They could be reconfigured as the three separate bedrooms they were in the beginning. 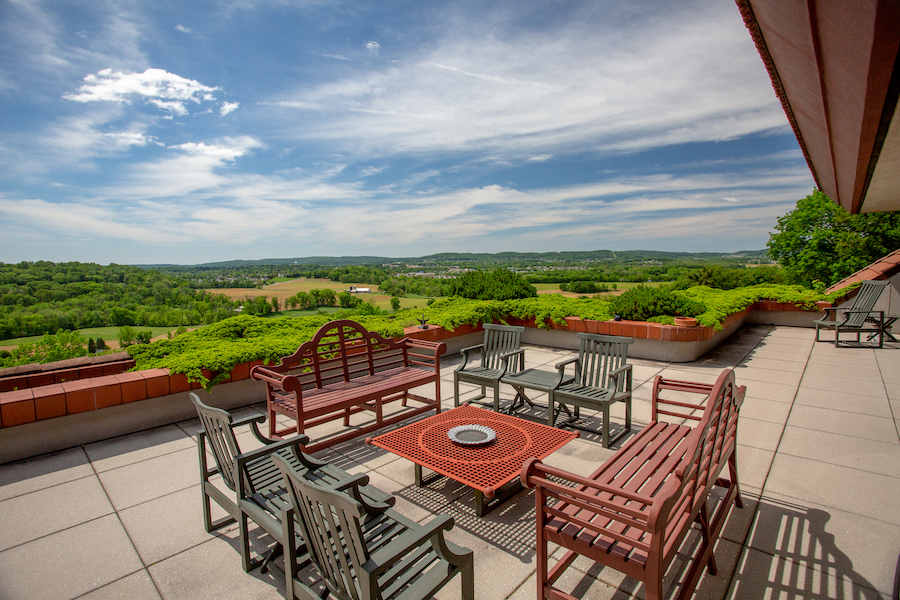 There are a few unusual things you can do at this house. One of them is sit on the rear upstairs terrace and watch the occasional airplane pass you at eye level — Reading Regional Airport lies about two miles northeast of and about 20 feet below this house for sale.

Another is circumnavigate it without getting wet when it rains. The house’s deep eaves cover a walkway that rings the entire structure. Those eaves, by the way, reduce the heat gain from sunlight striking the windows. That, in turn, helps this house’s geothermal heating and cooling system operate more efficiently.

And because this house is designed to handle lots of visitors, it also has plenty of places to park. In addition to the two-car garage incorporated into the house itself, this property also has a six-car detached garage, two outbuildings with a combined six parking or equipment storage spaces between them, and a grass parking lot off a switchback in the driveway leading up the hill to the front door.

It’s not exaggerating to call this truly unique house for sale a paradise perched on a hilltop. And it’s not only convenient to Reading and Philly’s western ‘burbs: You can be in lively and charming downtown Lancaster in about 40 minutes.

Schmidt is selling this house because he neither needs nor wants to maintain all this space anymore. Why not make your friends in Gladwyne green with envy by buying this house for sale that outdoes whatever they live in?

OTHER STUFF: This is the third time this house has been listed for sale. Its sale price was reduced by $300,001 on Sept. 19th.

Updated Jan. 3rd, 5:55 a.m., to accurately identify the airport located near this house.