The Victor finally gets company in the form of the first all-new luxury apartment building to be built in Camden since the 1960s. 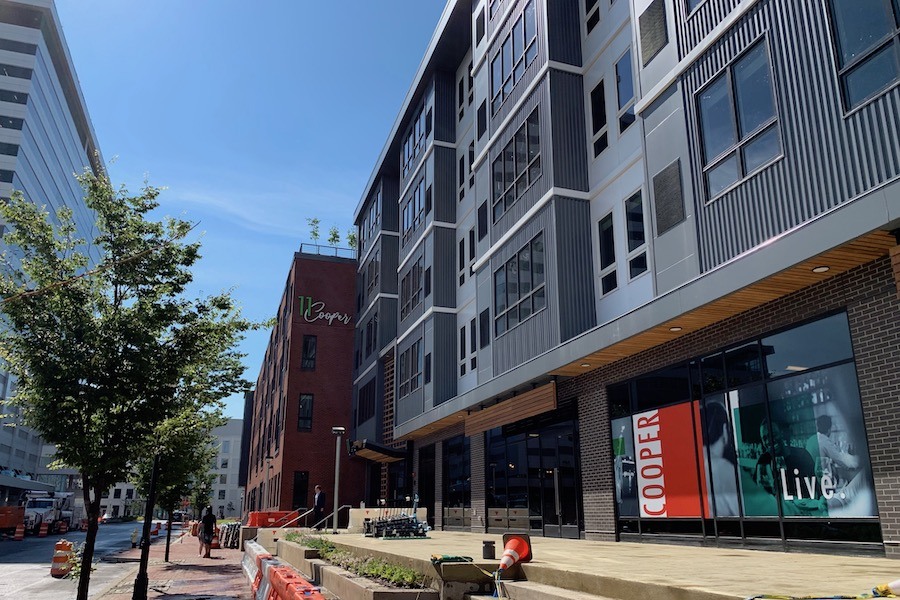 In case you haven’t been paying attention — and you probably haven’t been as you rush across the Ben Franklin Bridge — the slow-motion revival of central Camden appears to be picking up steam of late.

First came the expansion of Rutgers-Camden from a collection of classrooms into a residential campus starting in the 1970s. Then, in the wake of that, the Cooper Grant neighborhood around the campus began to show signs of rejuvenation as many of its older Federal and Victorian houses were restored.

Then, after most of the industrial buildings that had lined the waterfront had been demolished, the ones that remained started getting refurbished. Carl Dranoff led off with The Victor, his transformation of the landmark Victor Talking Machine factory into upscale apartments. Other smaller-scale renovations have occurred in its wake. 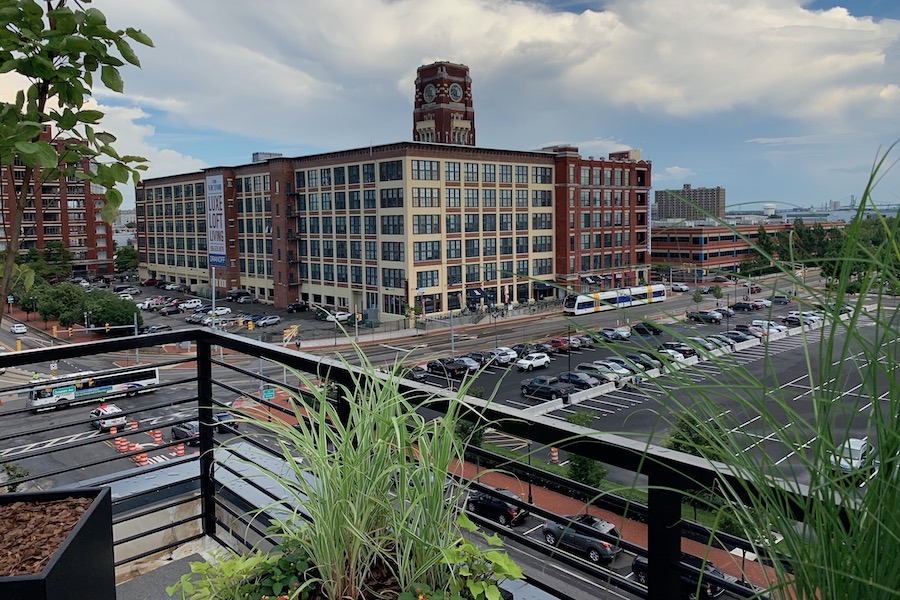 View of The Victor from 11 Cooper’s rooftop terrace

Now some old South Jersey hands are upping the ante with a new-from-the-ground-up apartment building diagonally opposite The Victor. 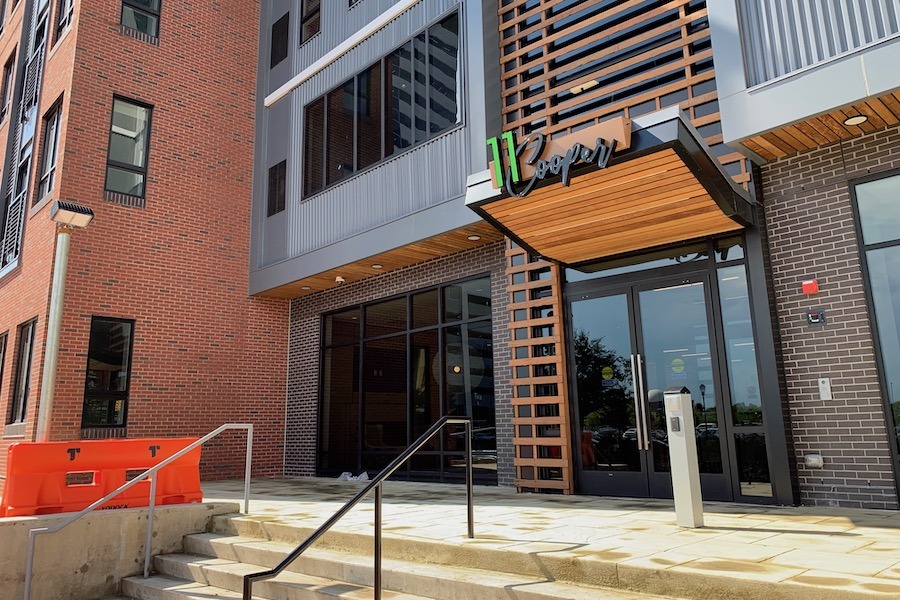 11 Cooper — that’s its street address — is the first brand-new market-rate luxury apartment building to rise in Camden in at least half a century. It’s also the closest residential building to the Camden waterfront. It forms a key link in a chain that extends from Rutgers-Camden past the Victor to the new office buildings at the foot of Cooper Street.

One of those office buildings, the American Water headquarters, won a Willard Rouse Award from the Urban Land Institute Philadelphia section this year. The other is a speculative tower that serves as the new headquarters of the company that co-developed it.

That company, The Michaels Organization, is also the developer of 11 Cooper. (It’s also one of three partners that own the office tower, called 1828Triad. All three have moved their offices into the building.) 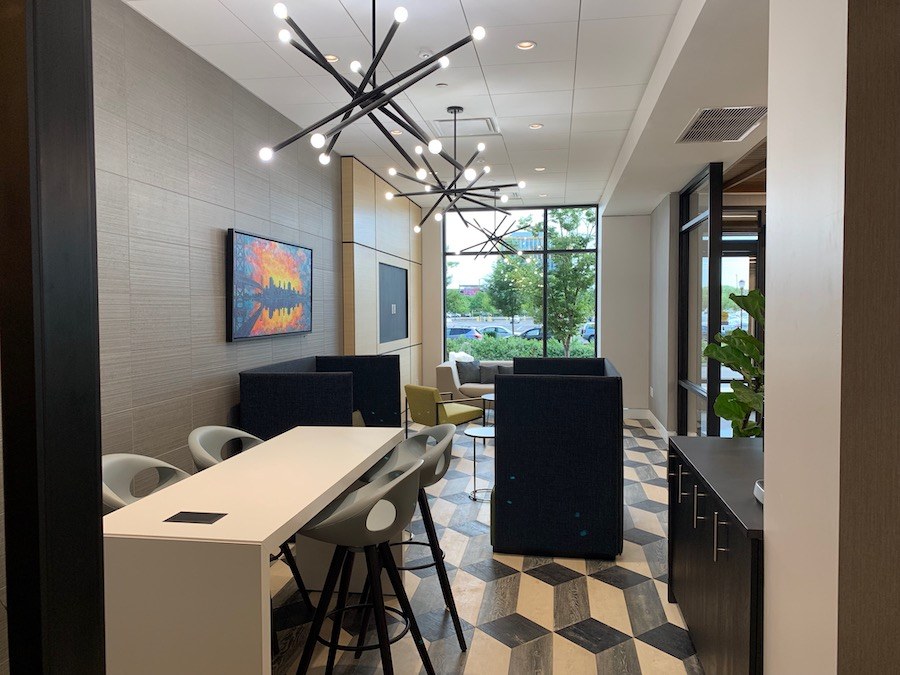 The business lounge in the lobby

“This has been our life for the last two years,” Michaels Organization President Ron Hansen said of the apartment building and office tower projects.

Truth to tell, however, Camden has been part of Michaels’ life for several decades now. Its affordable-housing division — the largest privately held owner of affordable housing communities in the country, according to the firm — has built several affordable housing developments in Camden City and County since its founding in 1975. And more recently, the firm has branched out into student housing: one of its developments in that market is the recently built Rutgers graduate student apartment building four blocks to this one’s west, at 330 Cooper St. 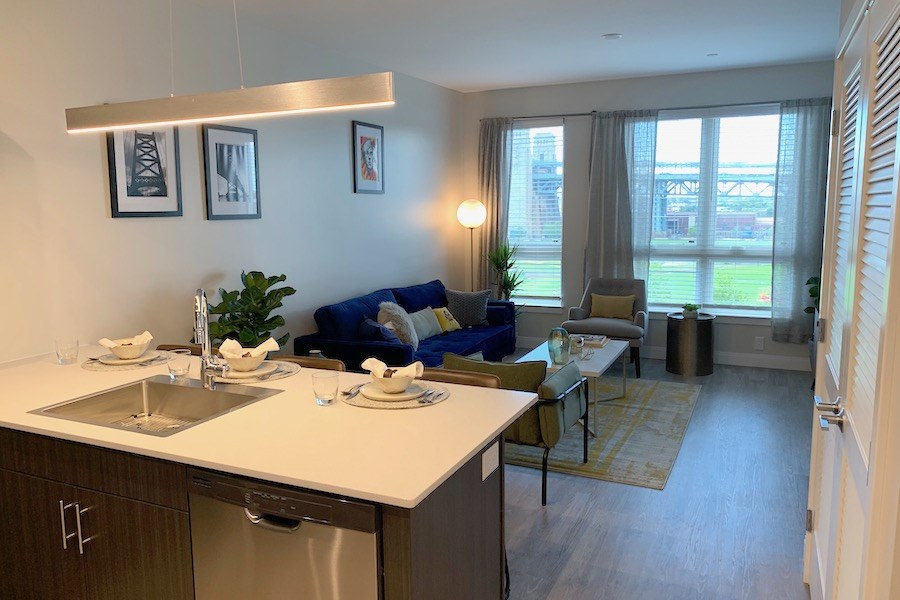 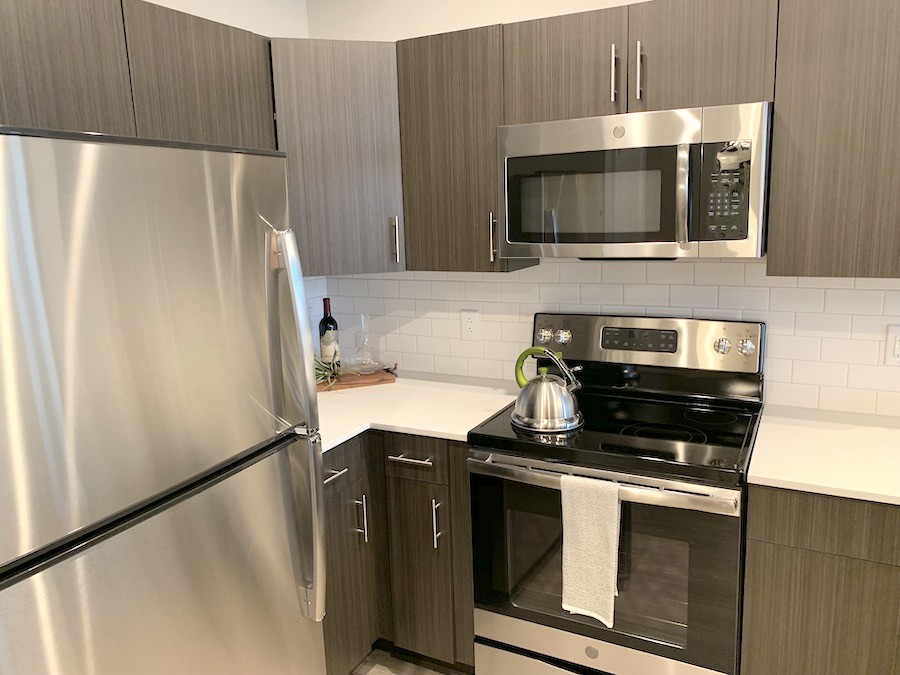 The kitchen in the model apartment 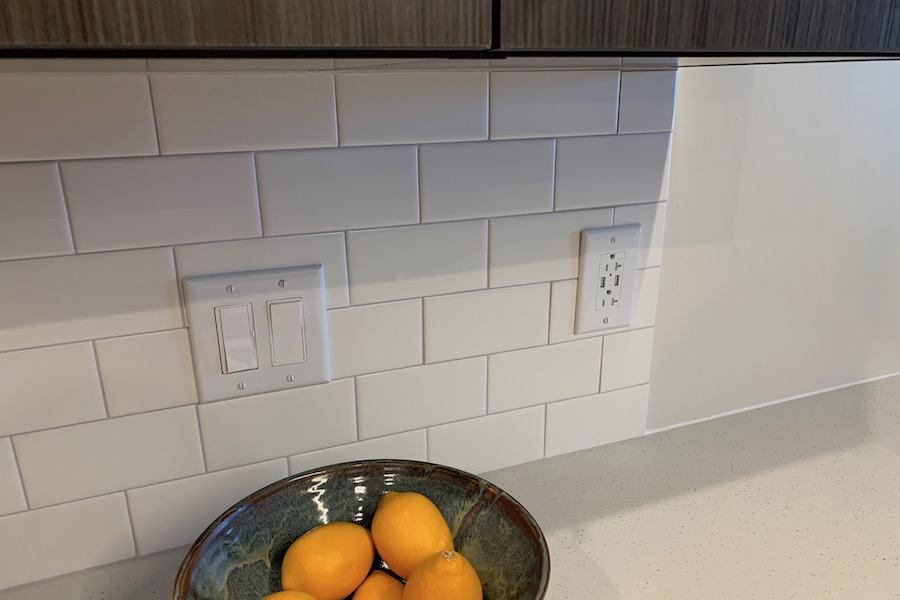 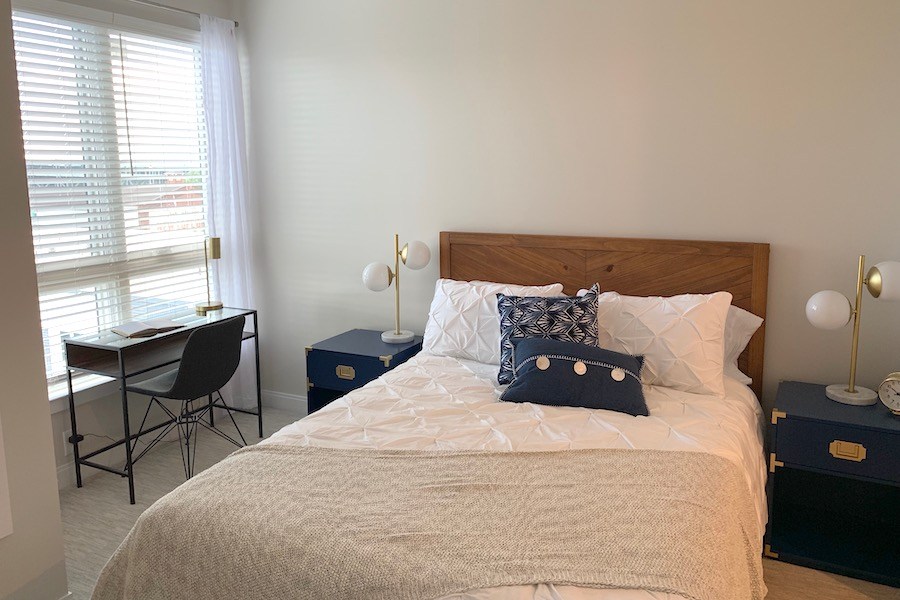 The bedroom in the model apartment

While 11 Cooper was developed by Michaels’ luxury living division, it also has an affordable component to it. That’s because, like so many of the other new and renovated buildings rising in the Cooper Grant neighborhood in downtown Camden’s northeast corner, it received assistance from the State of New Jersey. Tax credits from a New Jersey Economic Development Authority program will defray about $18 million, or 40 percent, of the project’s $48.6 million cost. In exchange for the credits, Michaels committed to making 20 percent of 11 Cooper’s 156 units affordable.

The building’s general contractor also has some skin in the game. Philadelphia-based Torcon specializes in constructing buildings under agreements that specify a guaranteed maximum price. Any changes or delays that push the cost above that maximum become Torcon’s to pay for, thus providing an incentive for on-time and on-budget performance. 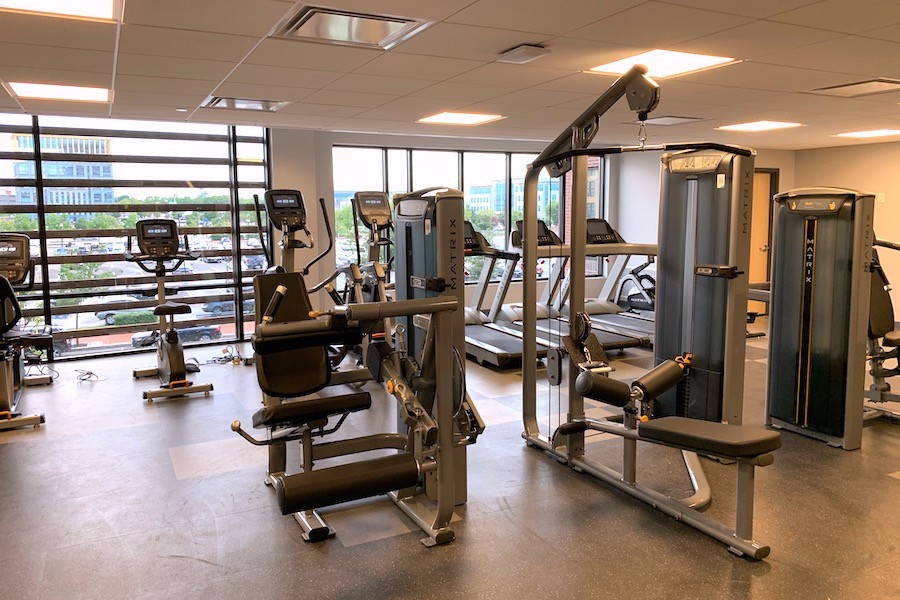 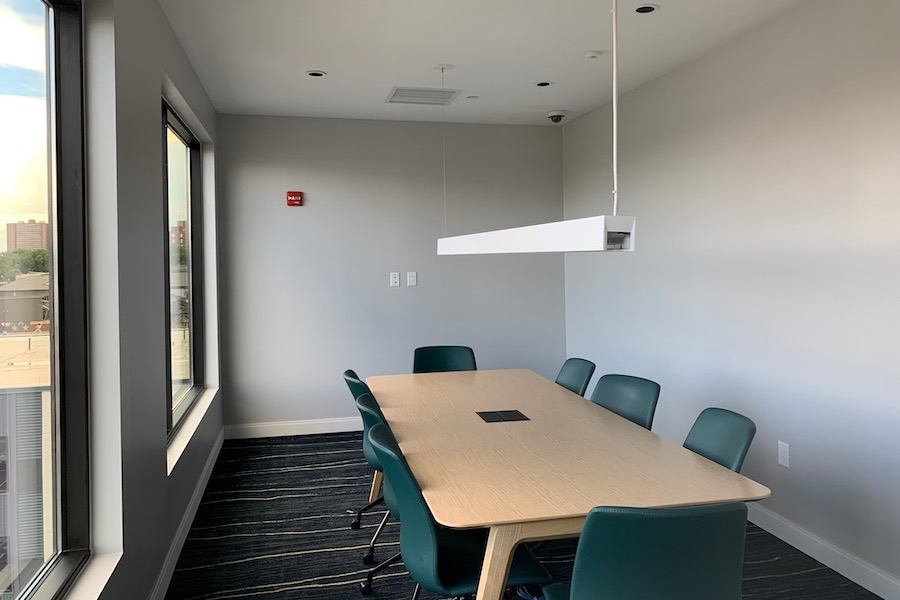 The boardroom next to the community lounge

Residents of both the affordable and market-rate units have access to an attractive mix of amenities. They include a fitness center facing Cooper Street, a business center off the lobby, meeting and conference rooms and a community room and terrace with a Jacuzzi tub and great views of the Ben Franklin Bridge on top of the building’s east wing. 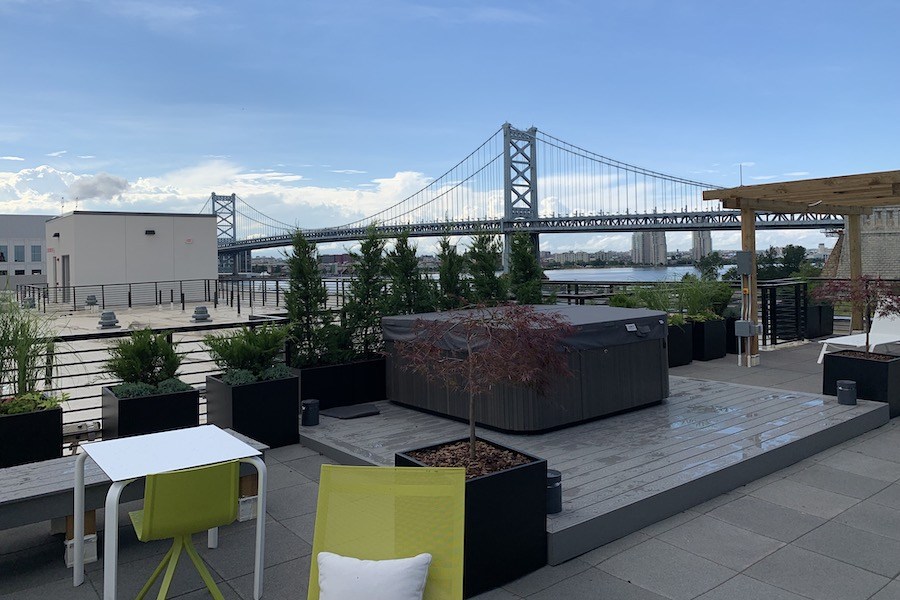 Jacuzzi and view of Ben Franklin Bridge from the rooftop terrace 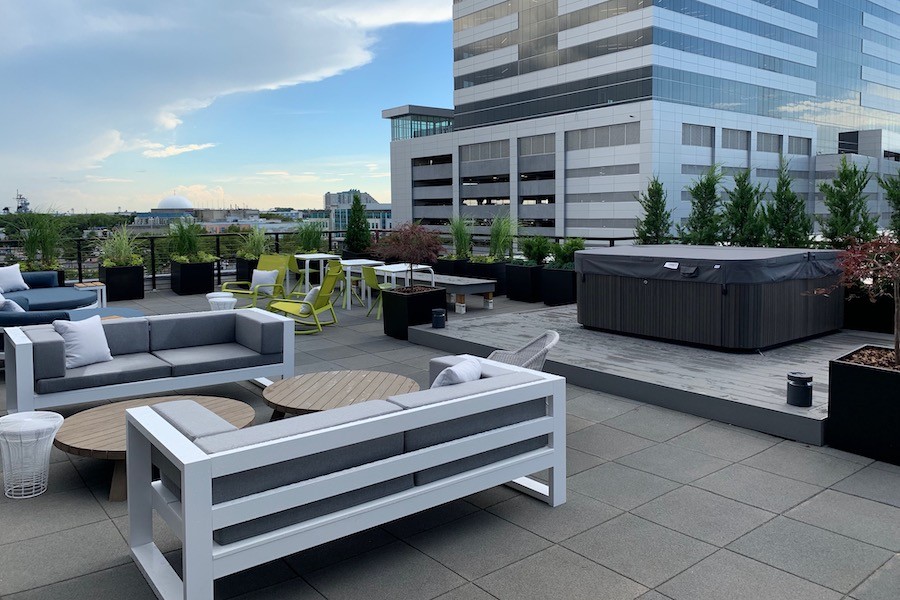 The rooftop terrace with 1828Triad in the background

Other community amenities for both residents and office workers will occupy the retail space on the street floor of the apartment building and office tower. Two Michael Schulson restaurants will take space on 1828Triad’s street floor, and 11 Cooper itself has three retail spaces totaling 5,000 square feet. Michaels plans on landing another restaurant tenant and a convenience grocer for two of the spaces.

Though all-new, JKRP Architects’ design for 11 Cooper splits the building into three wings in such a way that it looks like part of it — the brick-clad east wing — is an older structure that got added onto. The brick facades also break up the general grayness of the buildings that line this end of Cooper Street. The building meets LEED Silver standards and is part of a larger district for which Liberty Property Trust is seeking LEED Neighborhood Development certification. 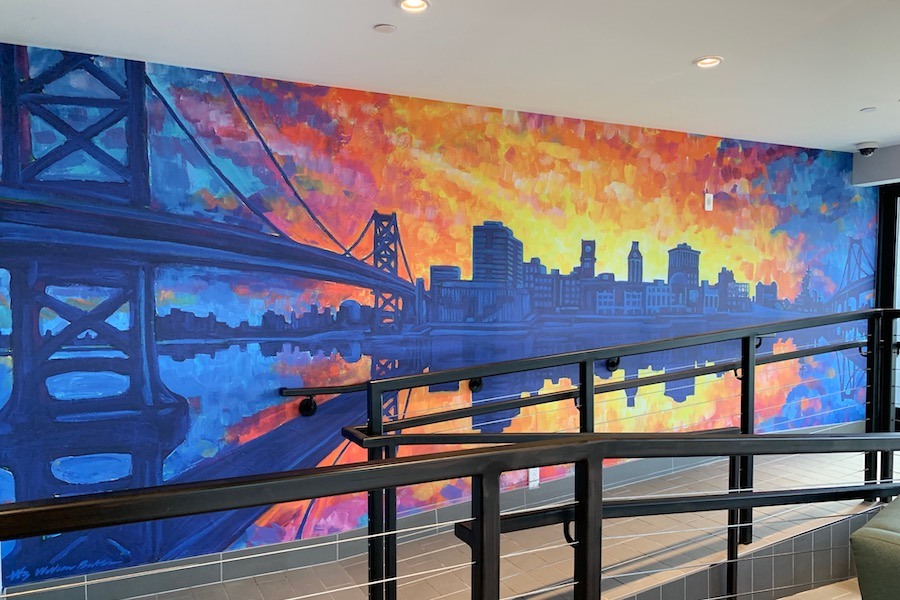 “Camden Daybreak” by Wilson Butler, in the top-floor community lounge; a smaller version hangs in the business lounge

Inside, Michaels sought to incorporate both the flavor of Camden and Camden residents into the project. The large mural of the Camden skyline at dawn in the top-floor lounge, for instance, was painted by Camden resident Wilson Butler, and the leasing manager and most of her staff live in the city.

O’Donnell hopes that some of the employees who work in their own office, not to mention other tenants in the office building, will find living here appealing. With the addition of the new restaurants and other amenities, chances are they just might.

11 Cooper by the Numbers

Number of parking spaces: 183, in a surface lot next to the building.

Updated July 18, 3:28 p.m., to correctly identify the source of the quote from the Michaels Organization.