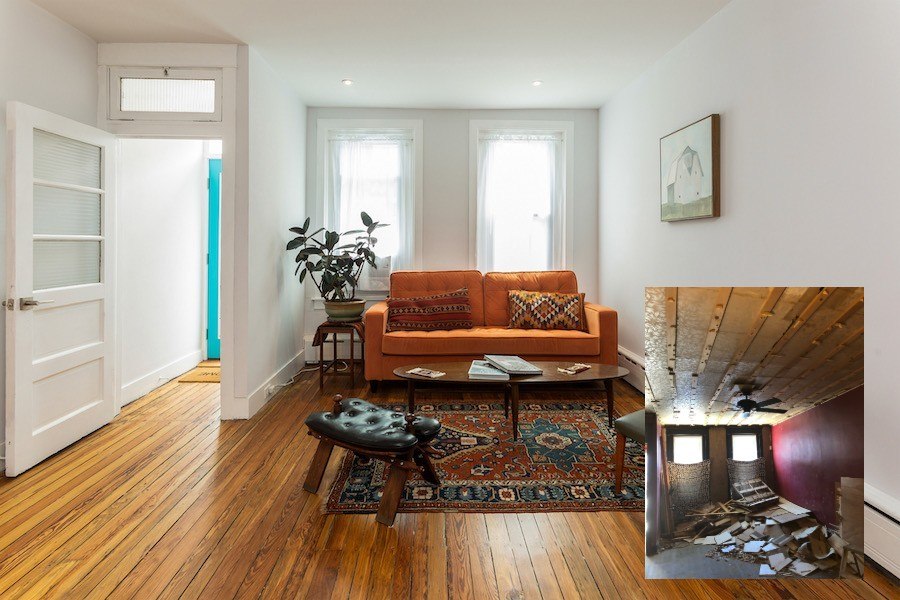 The living room at 1714 S. Chadwick St. after and (inset) during reconstruction of the house. | Completed renovation photos: Brandon Peszko, Vizzi Northeast; before- and during-construction photos: James Sugg

You know that cute rehab in Point Breeze we featured here a week ago?

The guy who took on the project just might give Rachel Street a run for her money someday.

After all, like Street, Sugg has made the transition from performing artist to real estate professional.

The path, however, is slightly different. Where Street started rehabbing houses before getting into the business of selling them, Sugg started selling them first.

But Street shouldn’t worry overmuch about facing competition soon, for the former Pig Iron Theater Company actor and composer says he learned a lot about the business of rehabbing houses on his very first flip — and that he will need some time to digest all he learned.

An actor follows an actor into real estate

Much like Street, Sugg got into real estate while he was still in the theater. (You can read about his shift from his multiple-Barrymore Award-winning run at Pig Iron to a gig in real estate here.) Realizing that real estate, like the theater, demanded one’s full attention if one was to be really good at it, he ditched Pig Iron and went whole hog into property sales. His guide into the world of real estate was another person who had made the jump from the stage to the staged house: Trish Kelly, the former Theatre Exile director who now heads the real estate team Sugg is affiliated with at Elfant Wissahickon Realtors.

What led him to test the waters of redevelopment was a combination of his experiences working with buyers and a piece of advice he got at the orientation session the Greater Philadelphia Association of Realtors puts on for new members. 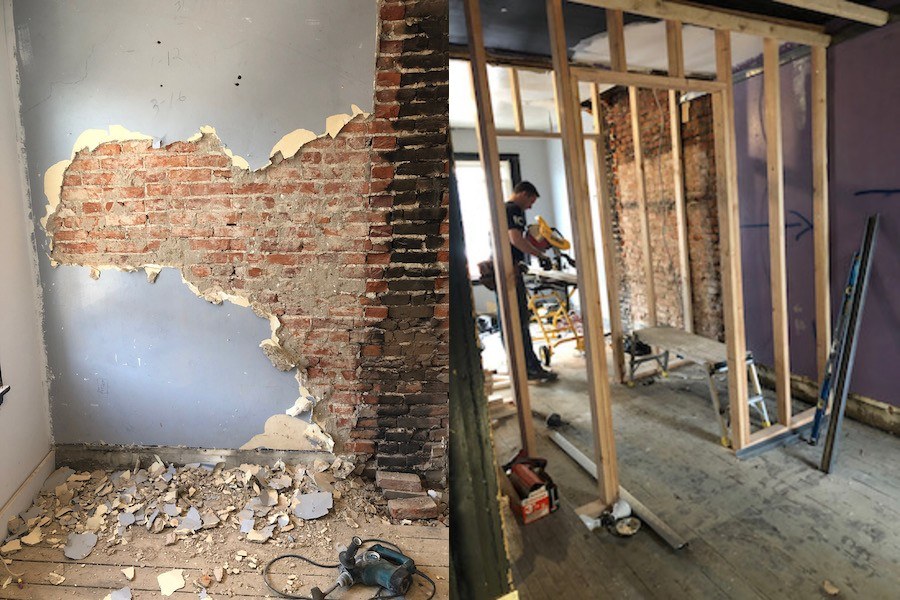 Left: One of Sugg’s creative touches was removing the wallboard and a disused chimney (black smudge) in the second-floor front bedroom to expose the brick wall. Right: After removing the walls that separated the front bedroom, middle bedroom and hall bath, Sugg reallocated the space to enlarge the bathroom and turn the bedroom into a master bedroom closet.

“My experience up until then had been helping my clients make $20,000 to $40,000 worth of repairs in order to sell a house. Doing that, you develop a lot of contacts who know the business, so eventually, I decided I would dive off the deep end.” 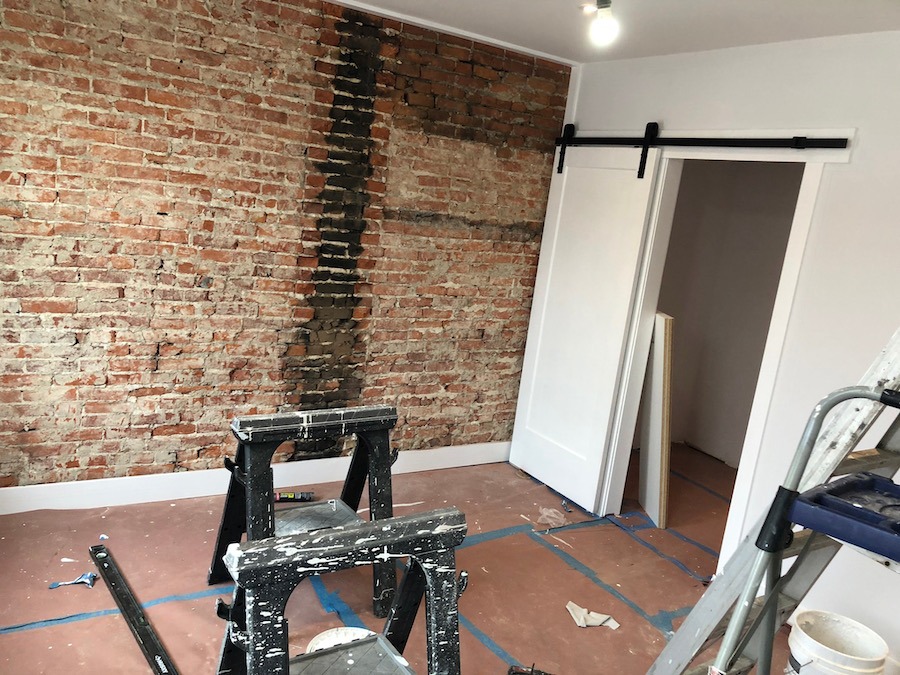 The master bedroom takes shape. The barn door leads to the closet carved out of the middle bedroom.

Going with his no-gut feeling

So, after buying a couple of properties, selling one and holding onto the other, he decided he was ready to actually turn a pile of dross into gold, so to speak.

The house he chose to make over was that rundown two-story rowhouse in the 1700 block of Chadwick Street.

What Sugg knew going into the project was this: He didn’t want to do one of those gut rehabs most house-flippers undertake.

“There were four other flips taking place on the block while I was doing this one,” he says. “I met with the contractors on those other jobs, and all of them were being done gut-style.

“I chose to do half renovation and half restoration,” Sugg said of his project. “I chose not to just gut the house top to bottom and get a square footage estimate for the job. I chose to restore what was there and add my own twist to it. And getting a [cost] number on that is trickier than just gutting it and putting in builder-grade blah-blah. This was more of an unknown, and it took a little longer and cost a little more.” 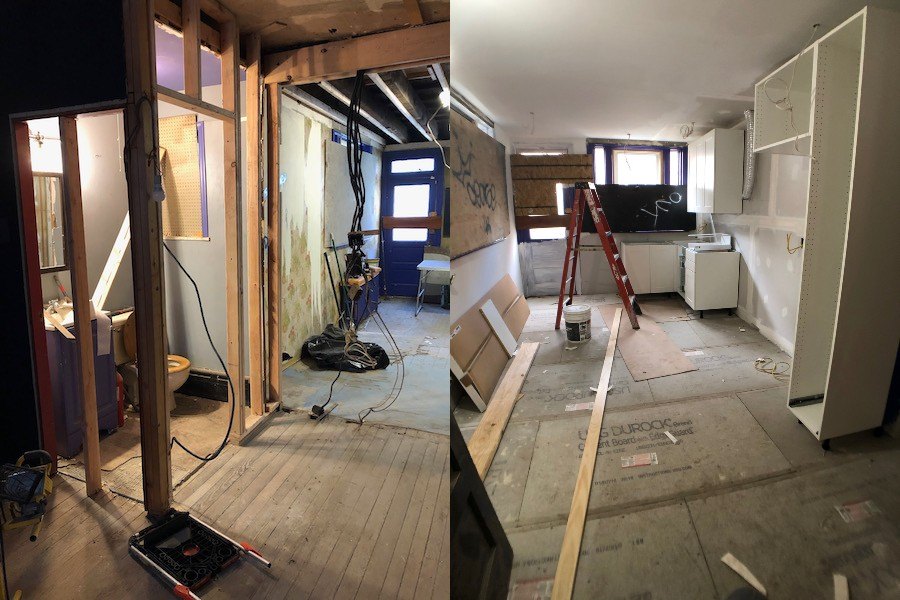 Left: The first-floor powder room and kitchen after removal of the old walls. Right: The new kitchen takes shape.

But he also knew from what those other jobs look like that it would be worth it, for he doesn’t much care for those garden-variety rebuilds. “What I was responding to was walking into a project and seeing zero, I mean zero, creativity,” he says. “No one put any thought into this project. They just went right down the middle with an eye on the bottom line. And that’s the way most of the renovation work is being done right now, and that’s unfortunate for the housing stock in Philadelphia.”

From darkness into light

It took a while for Sugg and his contractor partner, KC Quality Contracting, to learn just what the house wanted to be in its next life, for they had to repeatedly show up at the house, knock on the door, and hope the owner was there. What they found was tragic, to put it mildly. 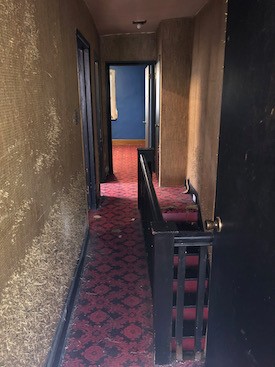 The shredded burlap in the second-floor hallway.

“For some reason, they had many of the walls lined with burlap. And they had cats. And the cats clawed the burlap all the time, and it was a mess.”

But somewhere in the mess, he already saw what the house could become. “Light, Scandinavian, raw, Bohemian” are the words he uses to describe it. Exactly what form that vision would take evolved continuously as he and his construction crew encountered new surprises every day. But that was part of what made the job interesting, he says: “As we ran up against issues, my design choices changed, and I adapted. If I had started with a gut removal of everything, these solutions wouldn’t have presented themselves, and I’m a creative dude at heart.”

Where he got creative

The most creative parts of his makeover can be found in the kitchen and the middle of the upper floor. On the second floor, Sugg solved a common problem Philly rehabbers face — “What do we do with that incredibly tiny middle bedroom?” — by turning it into a walk-through closet connecting the master bedroom in front with the hall bathroom. 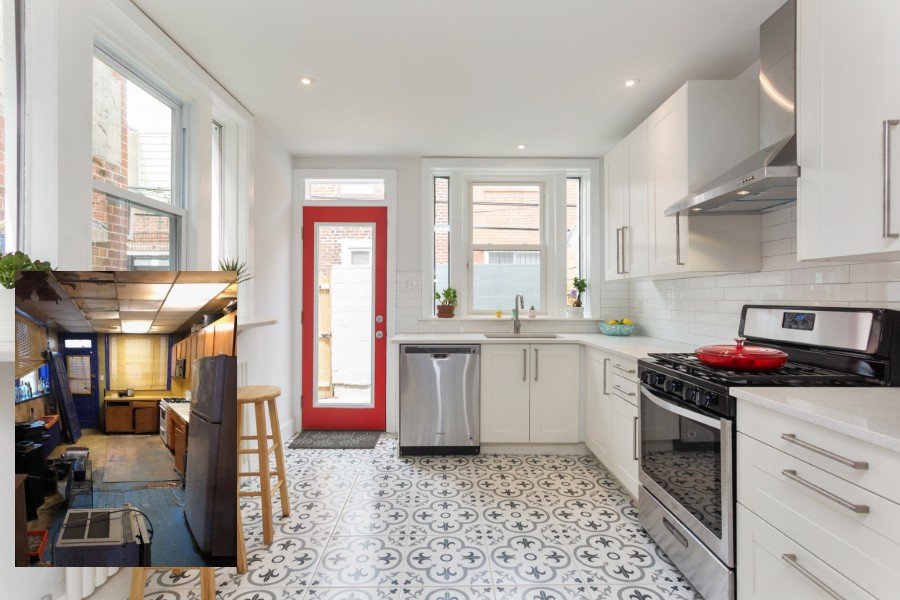 The kitchen, after and (inset) before renovation.

But it’s downstairs in the kitchen where he really got creative. The challenge here, he says, was figuring out how to turn the kitchen into an eat-in space. Sugg was stuck on putting a table in, but doing so would have made the space less open. Then Kelly took a look and recommended he put in a granite breakfast bar that would also form the sill of the windows on one side of the kitchen.

The Florentina tile in the kitchen and upstairs bathroom turned out to be the only new flooring Sugg installed. Everywhere else, he left the original pine floors in place and coated them with a low-gloss water-based polyurethane coating.

“It was a learning-curve thing”

Sugg figured he would spend about $75,000 renovating this house. He ended up spending one-third more, or $100,000 in all. “It was a learning-curve thing,” he says. “There were definitely some surprises, and a lot of it came from adapting things to what was there instead of just installing something. That made a difference in the amount of time spent. It’s hard to quantify, but I’d have to point to that as the main difference between my budget and those of the other flips.”

So, having now produced a successful flip, what does Sugg plan to do for an encore? “Next comes another hold,” he says. “I need some time to process this, and truthfully, my West Philly property has been so easy to manage and paid off so well, I’ll use the buy-and-hold formula next and do a post-mortem with some experienced people to see how to do it next time.” But, he says, “I know this will move quickly.”

Meanwhile, Rachel Street can rest easy, at least for now.