One of the city's best high-end developers took this 200-year-old carriage house and ripped its guts out. Wait till you see what they put in their place. 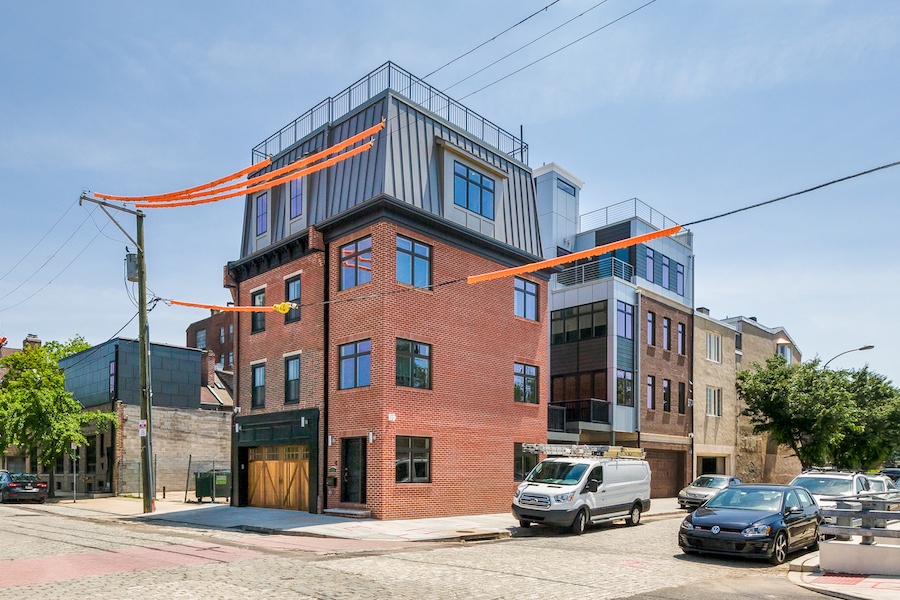 Can a 200-year-old house have a midlife crisis?

Maybe the analogy is inapt, but what AGA Developers did to this old carriage house just above the Ben Franklin Bridge entrance is the rough equivalent of trading in an old sedan for a Maserati.

The story begins with the three-story row house that’s now enveloped by this four-story masterpiece. At some time in its past, probably around the end of the 19th century, a third story had been added onto it, and a later owner inserted a garage into its first floor.

“The Historical Commission estimated that the brick facade above the garage was 200 or more years old,” says Sean Killeen, partner and director of development at AGA Developers. (If you look closely at the front facade, you should be able to see where the Flemish bond brick of the original structure gives way to a standard pattern at the top of the second floor.) “So the challenge for us was to successfully demolish the existing structure while ensuring the exterior walls remained intact.

“Once that work was complete, we had to shore the remaining structure and essentially marry a 4,000-square-foot new construction home into the historic walls.”

What you see here is the product of that marriage, and it’s gorgeous. It’s part of a two-unit AGA development called Janus Estates that includes an all-new home to this one’s south. 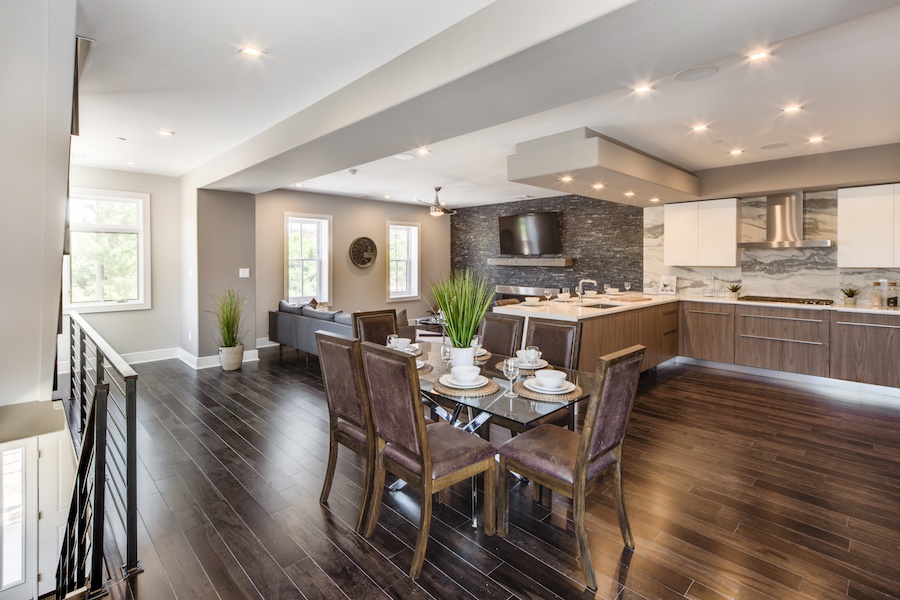 The main floor is a large open space that combines a living room, a dining room and a kitchen with no columns or dividers at all separating them. A beam that extends the length of the space over the middle of the dining room is the only clue provided to where the original structure ends and the new addition begins. 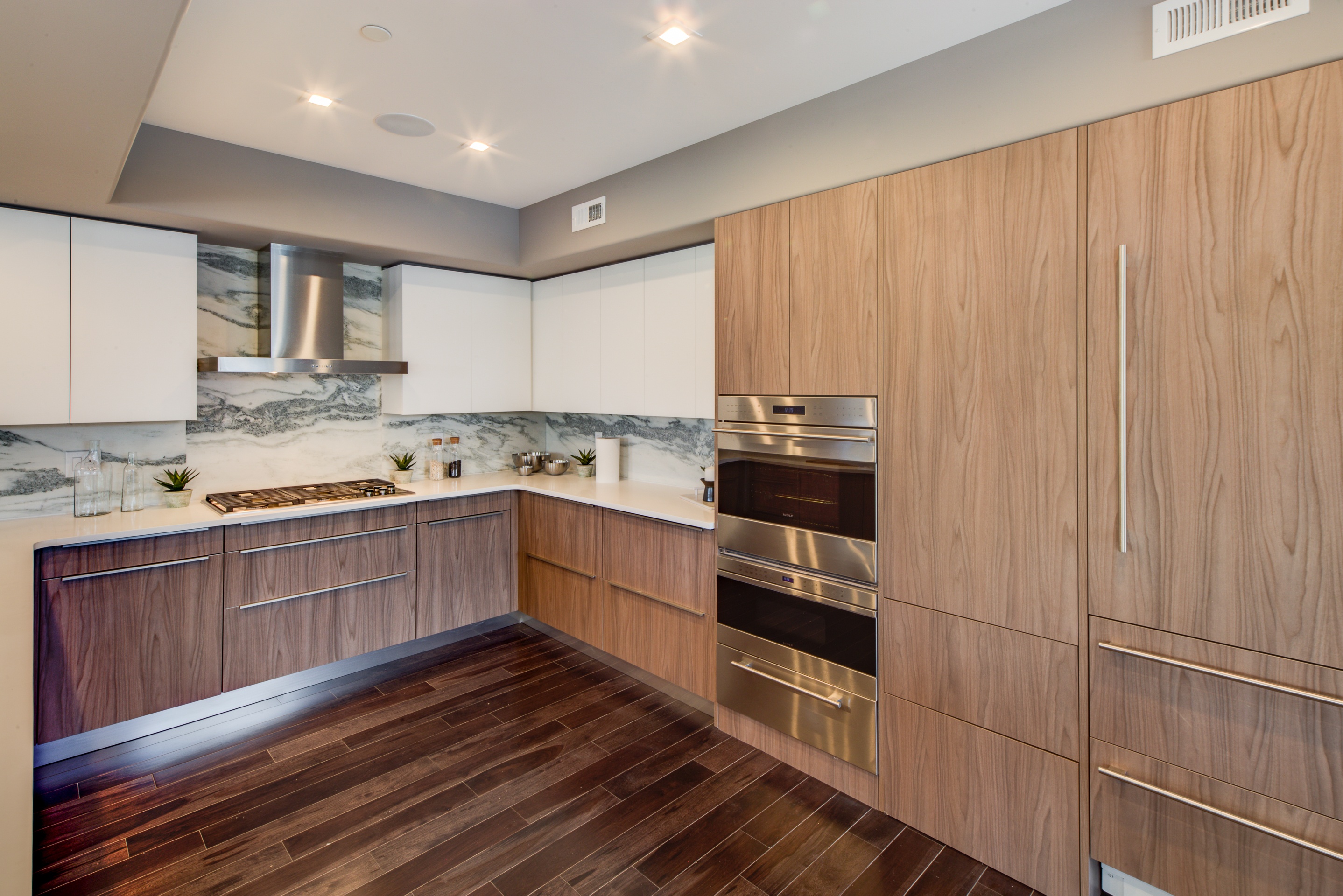 A breakfast bar peninsula with matching ceiling tray separates the living room from the ultra-sleek Eurostyle kitchen. Actually, the kitchen is a Euro-American mashup, featuring quartz counters, cabinetry from Linea Quattro of Italy and Bosch, Sub-Zero and Wolf professional-line appliances.

The bathrooms are just as sleek as the kitchen and faced with Porcelanosa stone and ceramic tile. 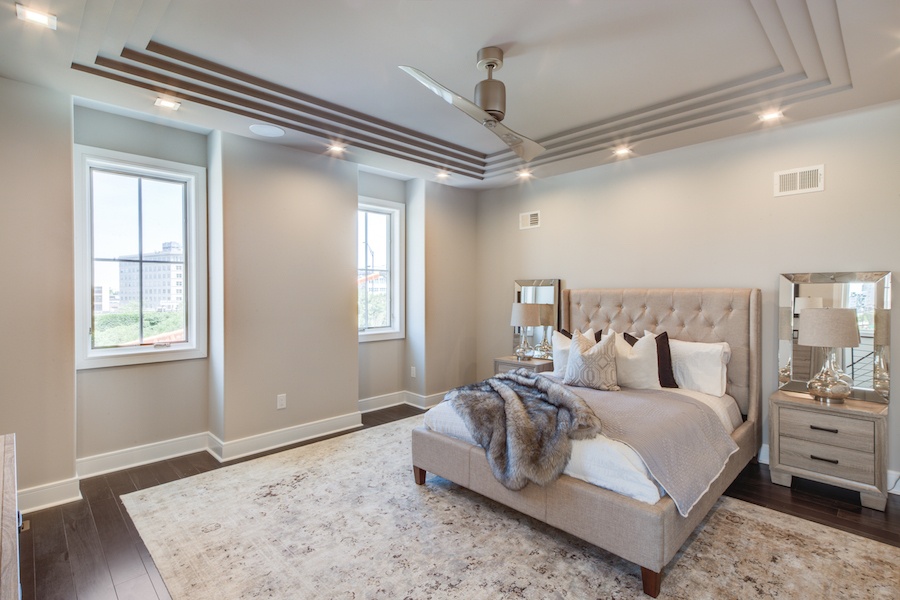 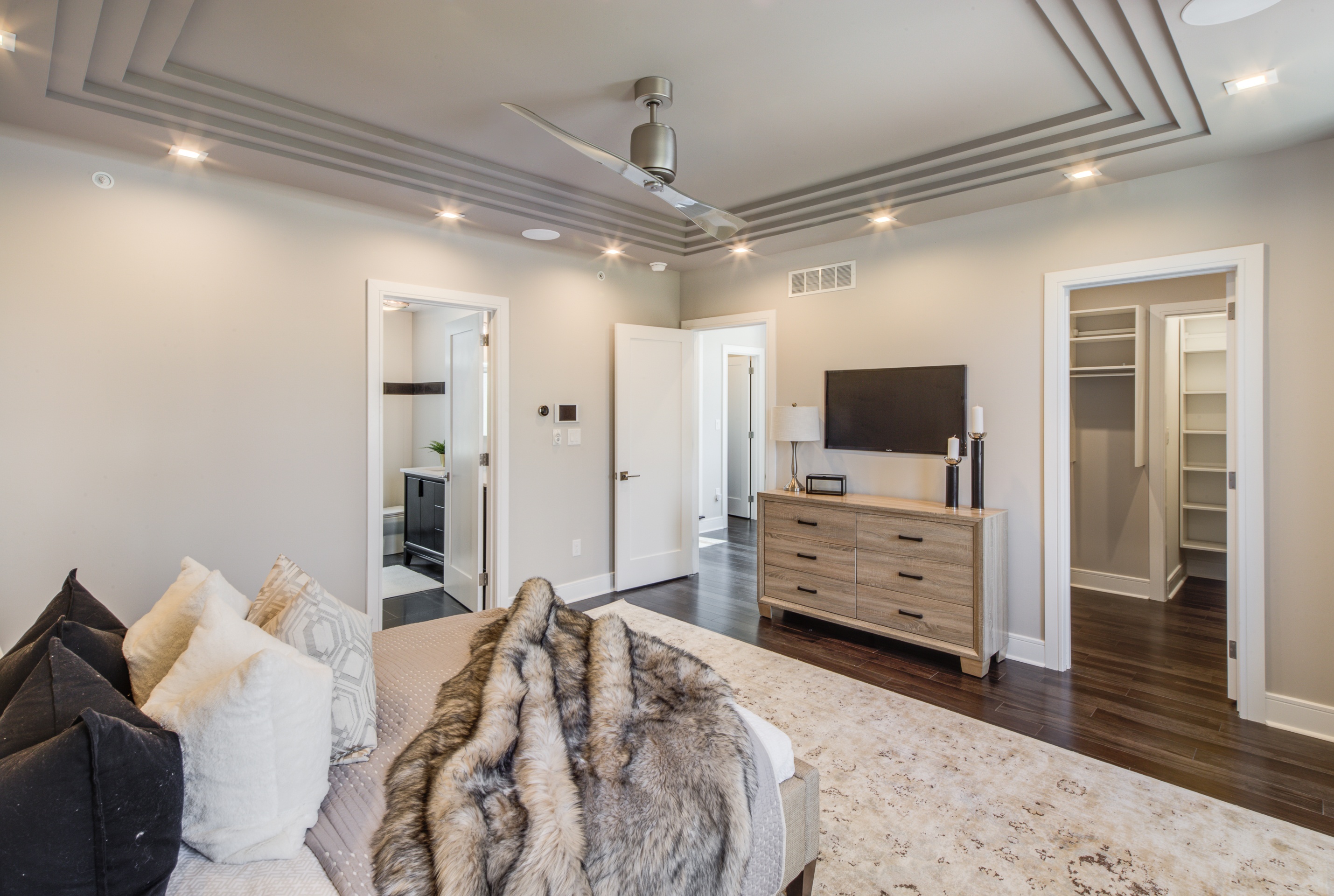 The all-new mansarded fourth floor consists of a sumptuous master suite. Its bedroom has an Art Deco-inspired tray ceiling and huge walk-in closets with custom organizers. 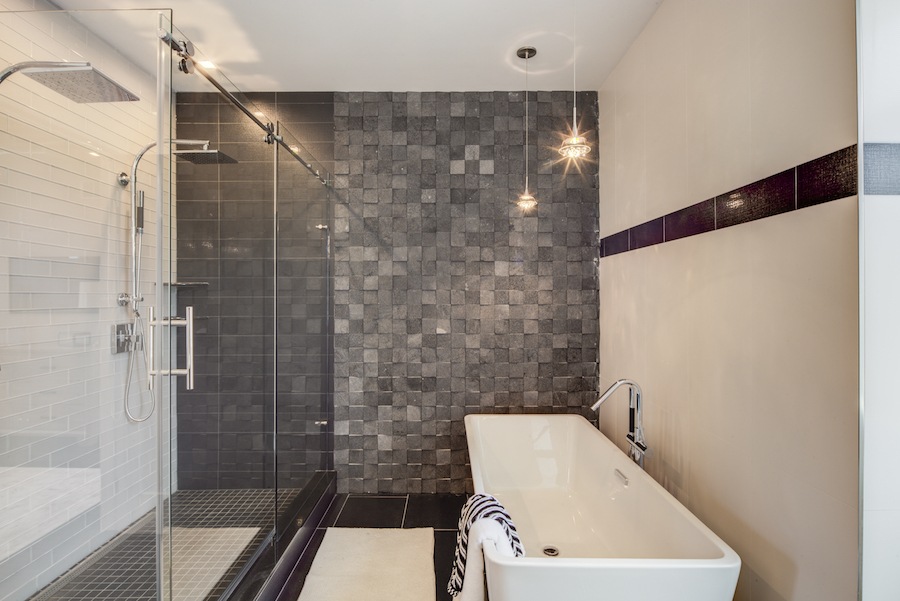 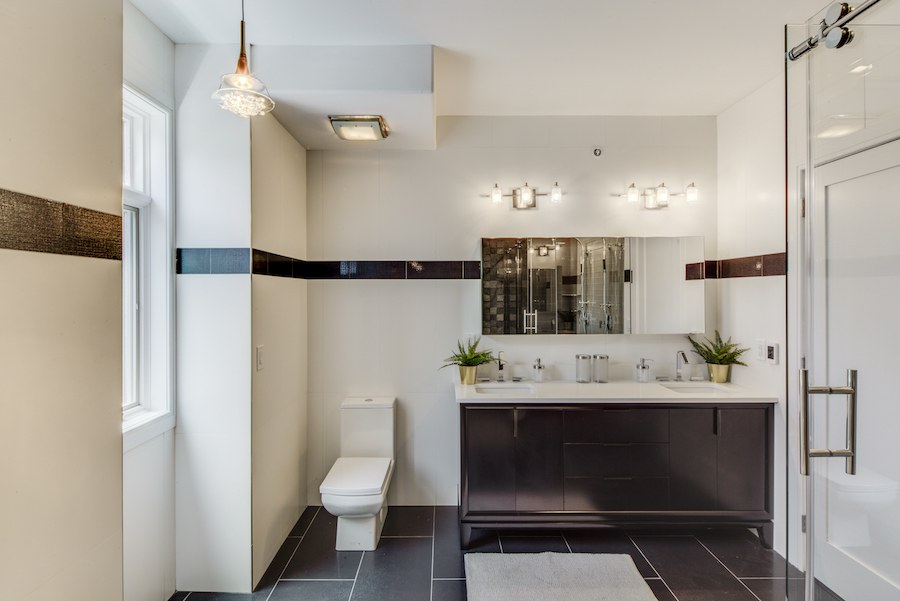 The bathroom features the best use of wood pavers we’ve seen since the repaving of the 200 block of South Camac Street. They provide a stylish accent to a luxurious bathroom that includes a soaking tub and an extra-large shower with dual rain shower heads and wands.

An entrance hall with wet bar and its own powder room on this floor allow your guests to access the roof deck while preserving the privacy of your master suite. 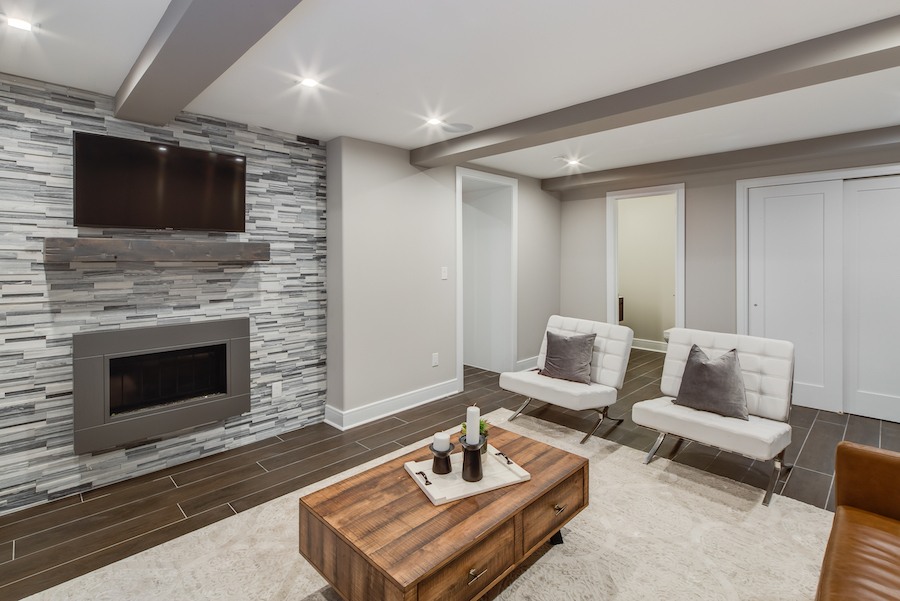 Below all this there’s a finished basement with a powder room and walkthrough closet. It’s outfitted for use as a media room, but you could use it as a home office or even a spare bedroom if you wish. 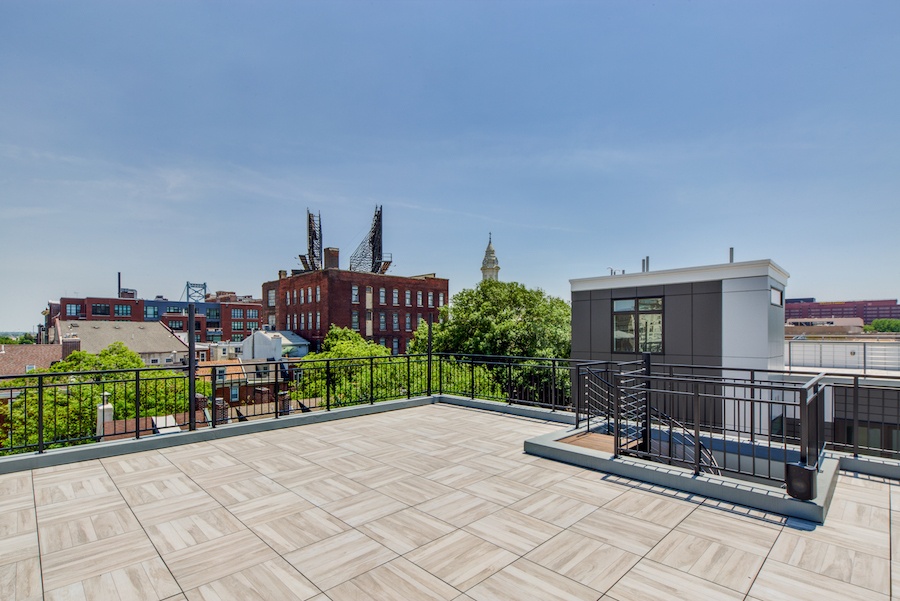 Finally, there are two outdoor spaces: a main-floor balcony accessed from the dining room and a full-floor roof deck paved with porcelain tile. 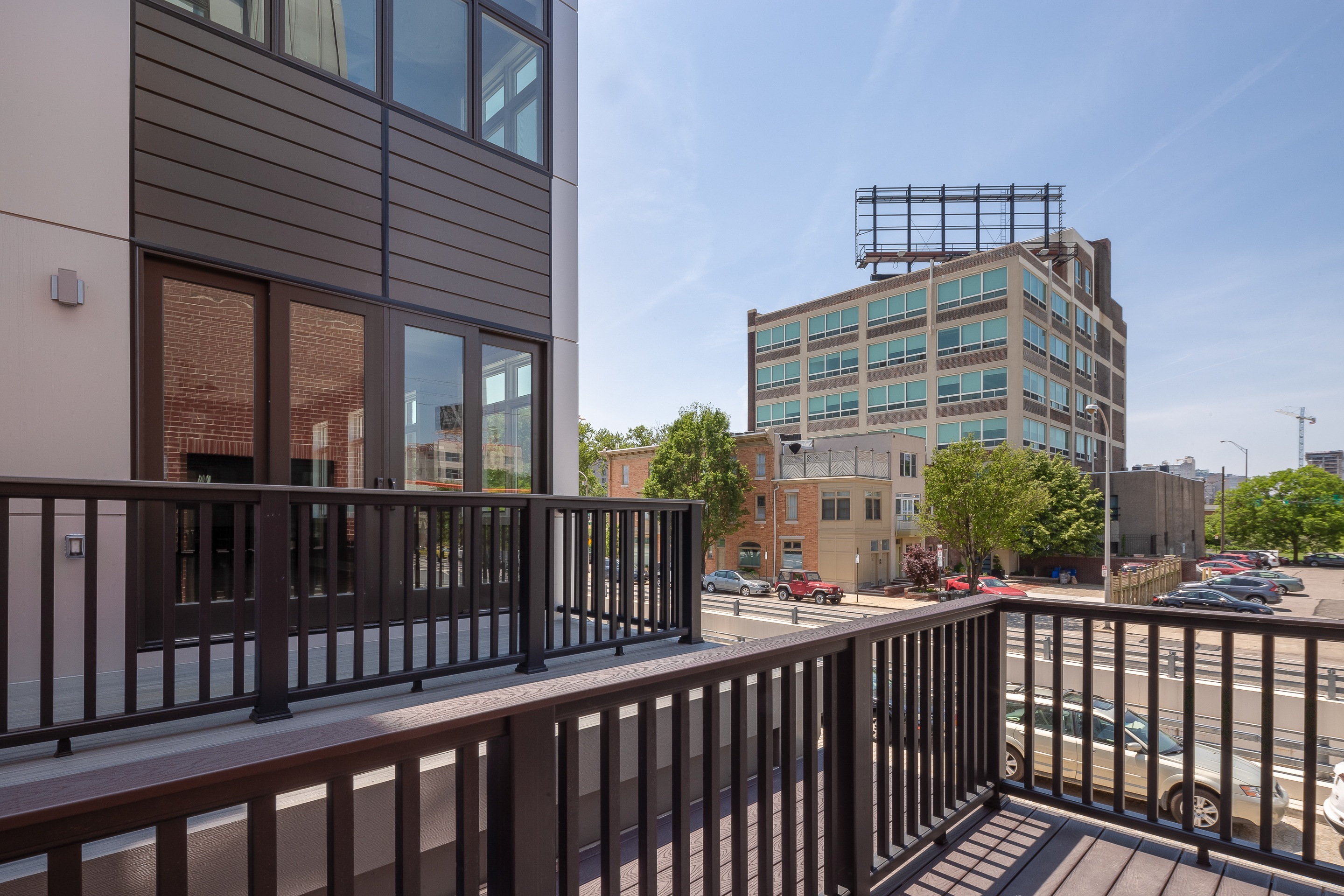 The agent describes this home as offering “the peace and quiet of the suburbs in the city.” The odd thing about this claim is that it just might be right. Even though the Ben Franklin Bridge entrance is a block to its south and the I-676/I-95 connector a block to its north, it’s far enough away from each that the roar of traffic shouldn’t bother you. At the same time, it’s close to everything you like about city life, with Franklin Square a short walk away to the west and the heart of Old City just to your southeast. And if you want a morning jog like no other in the city, the Ben Franklin Bridge’s nearly two-mile-long walkway is right around the corner.

OTHER STUFF: The garage holds two cars. Given its location, we’ll bet you can get by with one.