Who's Building Philly: Matt and Mike Pestronk
Subscribe
Follow
I'm a scraper
This search result is here to prevent scraping

The opportunity-seeking duo have a knack for finding diamonds in the rough, polishing them, then marketing them with a flair for showmanship. 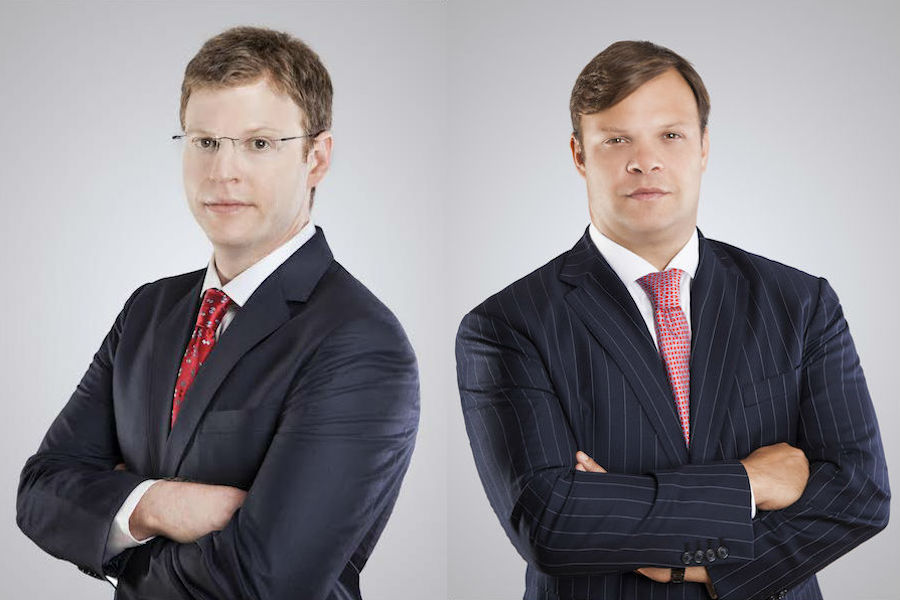 From their beginnings in Germantown in the mid-2000s, the actual brothers behind Post Brothers, Matt and Mike Pestronk, have had a bloodhound’s ability to pick up the scent of an apartment building that wasn’t living up to its potential. Then, once they found their quarry, they would capture it, drag it off to their renovation team, and let them have at it.

The end result was invariably far nicer and more impressive than the building they had found. And once they were done with it, they had a showman’s ability to persuade you to come look, perchance to live in it.

They’ve done this dozens of times with buildings well-known and obscure. And more recently, they’ve started doing this with buildings that had no apartments in them at all when they found them.

“Opportunistic” is not a dirty word

“We’re in search of opportunities,” is how Matt Pestronk boils down their company’s activities.

The language on their website speaks of this in the language of Wall Street: “Post Brothers Apartments is dedicated to developing and operating class A, best-in-class apartment buildings and complexes on a superior cost basis throughout Philadelphia.”

Translated into plain English, it means this: By doing everything from site selection to acquisition to design to construction to property management in-house, they keep costs under control while delivering luxurious digs to their tenants.

Matt, the more public face of the duo, explains that he and his brother got bitten by the real estate bug when they were both students at Drexel. “We worked in real estate in our undergraduate co-op assignments,” he says. “I was doing office building leasing and he was doing development. And that’s how we divide the business today. I identify the deals and arrange the financing and he does the development.

Investing where others weren’t

“The first building we bought was at 17th and Delancey streets, but we didn’t see opportunity there because everyone was already investing there.”

So they turned their attention to a neighborhood where they thought they could clean up by cleaning up apartment buildings: Germantown.

“Philadelphia 13 or 14 years ago was nowhere near as built up and invested in as it is today,” Matt says. “But we felt that Germantown specifically, and Northwest Philadelphia more broadly, was underinvested in terms of high-quality apartment stock. We found it strange that there were tree-lined streets with Victorian homes selling for a million or more while there were apartments in disrepair and one-bedroom apartments were renting for $500 a month.”

Matt described Germantown and Mt. Airy back then as “aspirational neighborhoods.” People who couldn’t swing the down payment and mortgage on a home, he says, could afford the rent on a quality apartment, and the Pestronks set about giving those renters some.

They did it because nobody else was. “We saw Germantown as a neighborhood where we had no competition,” Matt says. 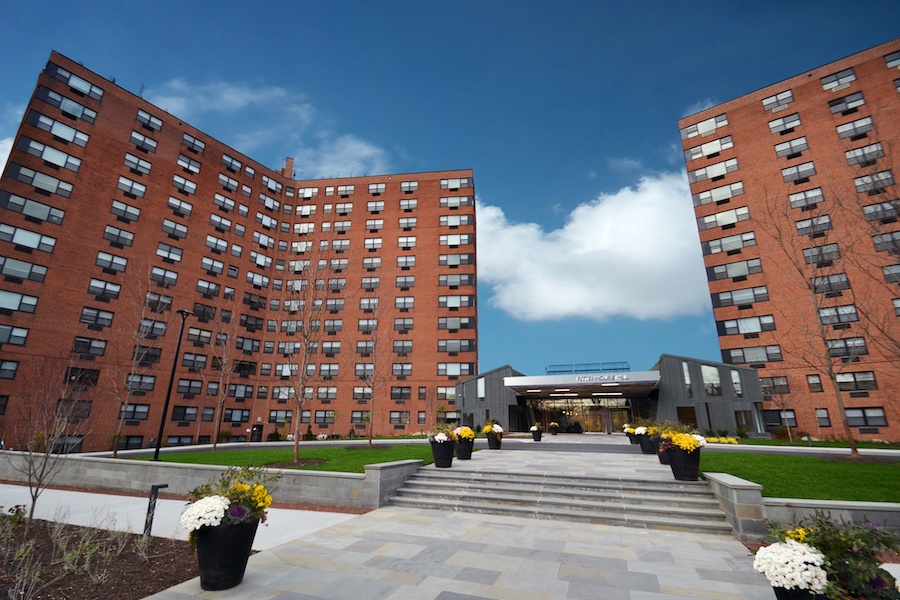 Backing up the homeowners in “middle neighborhoods”

One of their first successful transformations was the Copley Manor Apartments in the Tulpehocken Historic District. Its then-owner, Matt says, was “dragging the neighborhood down through benign neglect.”

The buildings they renovated in Germantown and Mt. Airy in their early years, he says, helped stabilize and strengthen the sorts of areas we now call “middle neighborhoods.” “You have a lot of homeowners in those neighborhoods who are investing money in their homes and keeping them up, and then you have landlords who let a 50-unit building languish.”

Matt says he and his brother rehabbed “four or five” such 50- to 200-unit apartment buildings in their early years, before the housing bubble burst. “Since then, these buildings have all changed hands, and where buildings didn’t change hands, the landlords spruced them up themselves.”

The Pestronks remain invested in Germantown still: two of their prized properties are the Delmar Morris House, a historic apartment building dating to 1900 near the west end of Chelten Avenue, and Rittenhouse Hill, a midcentury modern building two blocks north of the Delmar Morris. Post Brothers took that building upmarket with a host of amenity upgrades and green features. Matt says he still considers parts of the neighborhood underinvested even now.

On to higher-profile projects — and a fight

But since the market recovered, Matt and Mike have gone on to bigger and splashier projects. The high-profile Goldtex project, which turned a former factory in Callowhill into a deluxe apartment complex, got the company into the spotlight thanks to an ugly protest campaign waged by local building trades unions over Post Brothers’ use of nonunion labor. Post Brothers fought back with a publicity campaign of its own that, among other things, exposed harassment and bullying of the more diverse workforce they had hired for the project.

Matt defended Post Brothers’ construction workforce in our interview. “We have good relations with the heads of the individual building trades unions, and we hire a lot of union people for our projects,” he says. “Our project workforces are harmonious and diverse, and if someone has a problem with that, I don’t have a response.” 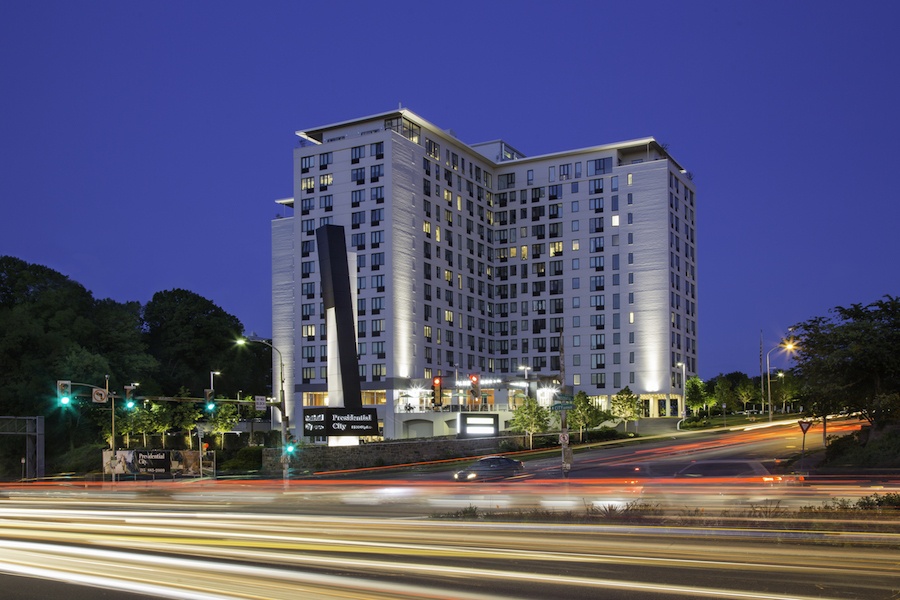 True to their roots, broadening their horizons

The company is now shifting from buying and rehabbing existing apartment buildings to adaptive reuse of other structures. Its latest entry in that department is 260 South Broad, the former Atlantic Refining Company building. “260 South Broad will be a showstopper,” Matt says.

But it hasn’t completely abandoned the field of apartment repair, either. Work is now complete on their two-year-plus upgrade of the landmark Presidential City complex in Wynnefield Heights, a project that renewed all four of the development’s apartment towers and added a resort-quality pool, health club and spa, among other amenities. Right now, it’s putting the finishing touches on a total renovation and expansion of the historic Hamilton Court apartments, an Italinate trio built in the 1890s in University City.

And just two weeks ago, Post Brothers announced that it had acquired a controlling interest in the Schmidt’s Commons complex in Northern Liberties from the Kushner Companies of New York. Also known by its former name of The Piazza at Schmidt’s, the development consists of three purpose-built apartment buildings with street-level retail and a converted former malt house that houses an outpost of the coworking firm WeWork, all arranged around a central courtyard.

While Post Brothers hasn’t yet released full details of their plans for making this project over, the company has said that it will add a pool, health club and outdoor amenities along the lines of those at Presidential City’s Sora Pool Club. It will also continue to maintain a public commons in the courtyard that can be used for special events as well as reinvigorate the retail space.

“Our business is taking properties that have strong potential both financially and in terms of the living experience, and turning them into world-class assets,” Mike said in a statement after the acquisition was announced. “We have always looked for projects where we can apply this model and continue to position Post Brothers as the gold standard for delivering luxurious, amenity-packed residences in Philadelphia and throughout the Northeast. The acquisition of the Piazza is part of a multi-billion-dollar investment strategy to take these properties to the next level.”

Next stops: North Jersey and DC

Note the “throughout the Northeast” passage in that statement. Post Brothers is broadening its sights, both into the realm of commercial real estate and mixed-use projects — both 260 South Broad and the Schmidt’s Commons fall into this category — and into other cities as well.

“We have a major project in Northern New Jersey right now,” he says, “and we’re looking for more both there and in Washington.

“But we’re not done with Philadelphia yet. Not even close.”