How do you visualize 90 percent lower energy bills? You build boxes around two blocks of ice and let them melt for 20 days. Your best guess as to how much ice remains could win you a prize. 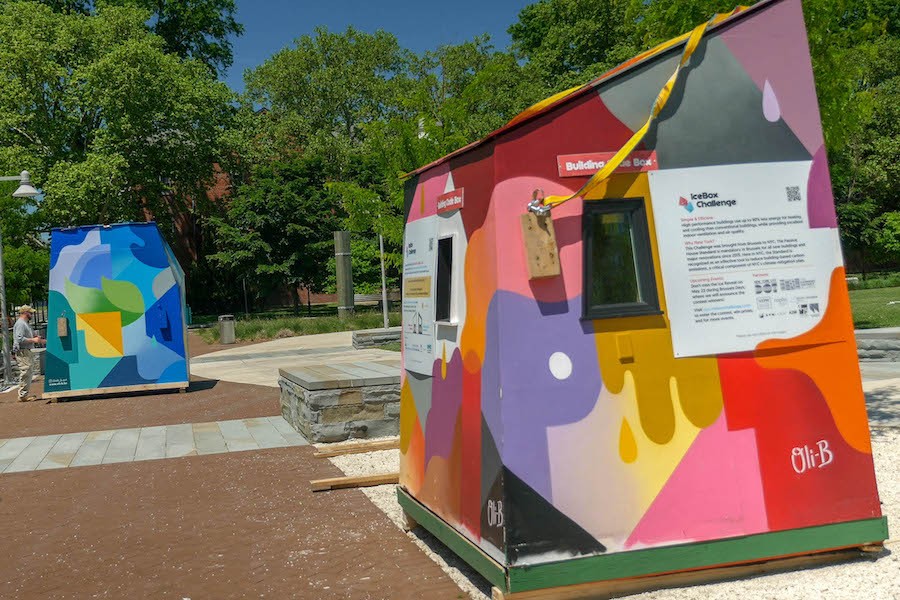 In the foreground, in hot pink: The ice box built to current code standards. In the back, in blue: the passive house ice box. Guess which one will stay cooler. | Photo: Ebony Roberts, JOE Black Media

In case you missed it: The city and state building codes both just got updated to reflect advances in building technology that will save you money.

If you plan on buying or renting a new apartment in the city, this will be good news, for Green Building United reports that Philadelphia City Council voted last week to adopt the new 2018 International Building Code standards.

To do so, the city got a waiver from the state board that reviews and updates Pennsylvania’s Uniform Construction Code. The state code that sets standards for construction of all commercial and residential buildings was only recently updated to bring it in line with international standards adopted in 2015, and a change in state law intended to break a nearly seven-year-long stalemate on updating that code ensures that future revisions will lag the latest worldwide standards by at least three years.

But why wait another three years to reap the benefits of the latest building code standards when you can do so right now?

The “passive house” standard goes beyond even the latest International Building Code standard to produce buildings that are super-insulated and almost 100 percent airtight to cut down on heat gain in the summer, heat loss in the winter and drafts. Proponents of the standard note that it both contributes to reduced greenhouse gas emissions and produces huge savings on energy bills — as much as 90 percent.

But it’s hard to visualize savings that big until the first energy bills arrive in the mail. So to help people visualize just how big those savings are, two 1,800-pound blocks of ice are right now slowly melting in League Island Park at the Navy Yard.

Actually, one of them is melting more slowly than the other. That’s the point of the Ice Box Challenge, a high-performance building challenge that originated in Brussels and is making its way down the East Coast this summer.

Just before the start of Memorial Day weekend on May 24th, the two ice boxes — plywood structures with windows that let you peer inside to watch the ice melt and see how they’re built — arrived in Philadelphia, fresh from their tour of duty in New York. Crews from Crux Homes, a Haddonfield-based builder of affordable high-performance homes, and Footprint Sustainable Housing Corporation, the Vancouver-based firm that built the boxes currently touring the East Coast, installed the boxes and put the ice blocks inside them upon their arrival.

The structures, designed by Stark Architecture and E3 Eco Group, are identical in their dimensions and basic building materials: standard timber studs with plywood on the outside attached to a base. One of them is built to current building code standards while the other incorporates passive house technology: it has triple-paned windows, extra insulation and air-sealing membranes inside.

Several cities worldwide have staged this challenge since its first running in Brussels. The results of the challenge to date have been the same yet different in every city where it’s been staged.

“As a collective, we knew the passive house ice box would win every challenge, but we didn’t know by how much,” Shaun St-Amour, head of Footprint, wrote in an email to the Philly challenge sponsors. “Each city has taught us new things and it has brought our passive house community closer while providing awareness to the general public of the benefits of the passive house standard.”

(As the City of Vancouver helped underwrite the costs of the tour’s original stop, so the City of Philadelphia is chipping in on the cost of this stop, the opportunity for which arose at just about the last minute.)

The East Coast Ice Box Challenge sponsors, Passive House Western Pennsylvania and the North American Passive House Network, invite you to learn just how much more comfortable and cheaper to run a passive house home can be by taking the challenge for yourself: either on-site on online, you can guess how much ice will be left in each box when the boxes are opened and the ice weighed on June 20th. The two entries that come closest to predicting the total weight of the ice remaining in both structures will win prizes. Ties will be broken by determining who comes closest to predicting how much ice remains in the passive house structure.

We predict that number will be a lot higher than the other one.

Updated June 11th, 10:44 p.m., to correctly identify both the designers of the structures and Footprint’s role in their erection.