The two founders had a meeting of the minds while they were both in college in New York. Now they’re busy rebuilding communities in the place where one of them grew up. 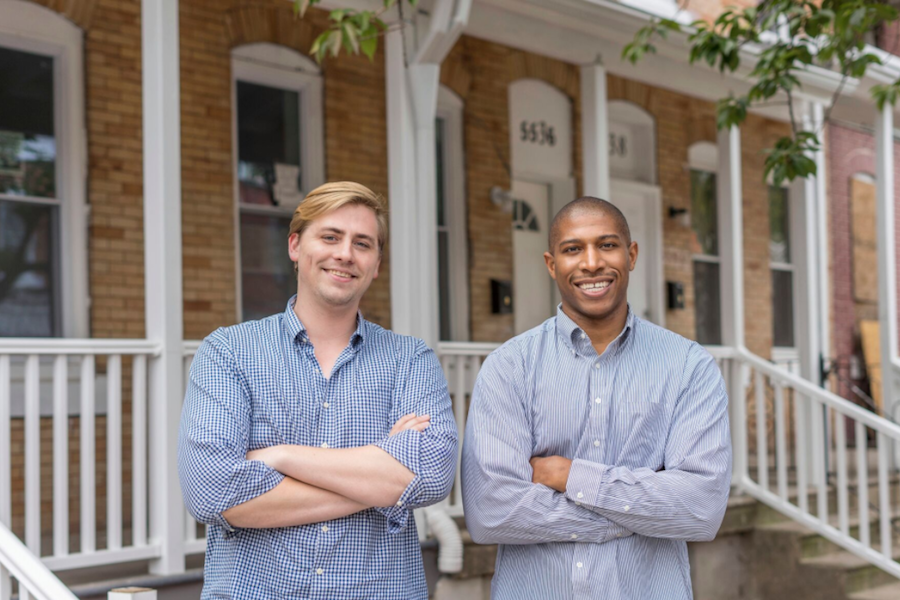 To understand why Brian Grimes and Travis Robert-Ritter named their real estate development and investment firm Bloyd Street Capital, you first need to understand the 5500 block of Bloyd Street in East Germantown, around the corner and two blocks down from where I live.

That’s the block where the duo bought the first abandoned houses they restored. And that project embodied everything they want to do for neighborhoods across the city that have fallen on hard times thanks to sustained disinvestment.

In a few words, what Grimes and Robert-Ritter want to do is rebuild communities for the benefit of those already living in them.

So here’s what the first community they invested in together looked like when they first laid eyes on it:

“When we first got here, there were probably 14 boarded-up houses,” said Robert-Ritter when I interviewed them in front of their first project last fall.

“We couldn’t stand here and do this interview without about 30 cars pulling up, stopping and buying drugs,” Grimes said. “That’s not going on anymore.”

From one house to 10 in one fell swoop

And it’s not exaggerating to say that their work helped bring that to an end. What they did was buy 10 houses that were in various states of decay, restore them, and rent or sell them to tenants and buyers much like the homeowners who still lived on the block. Which is to say, low to moderate income and just about all African-American.

Except for the income part, that describes Grimes, who grew up in a middle-class household where West Oak Lane and East Germantown meet. He and Florida native Robert-Ritter met when he was studying economics at Columbia University and their wives were studying law there.

Grimes had already gotten the development bug when they met. He had bought a few houses back in Philly while at Columbia and had successfully rehabbed and sold them. Robert-Ritter, whose academic background is also in the law, was working on a land deal of his own in South Florida. Grimes was eyeing a partially collapsed house on Bloyd Street as his next investment when Robert-Ritter entered the picture.

A helping hand from Jumpstart Germantown

To pull off the 10-houses-at-one-time deal, they got help from the Jumpstart Germantown program.

“We’re big research guys,” said Grimes. “We research financial institutions that are out there, and we found a program that catered to the area. Ken [developer and Jumpstart Germantown creator Ken Weinstein] is a great person, and we decided to go with them on the financing side to help us bring this to fruition faster.”

(While most of the people who go through Jumpstart are completely new to the development game, the program will work with younger developers who may have already done projects in order to help them understand the business better. Graduates get access to project financing as part of the deal.)

This was in 2015, when Bloyd Street Capital consisted of just its founders and two project team leaders. Today, the firm has 20 associates and counting.

Neither Grimes nor Robert-Ritter describe themselves as real estate investors. Their business, they say, is investing in communities and delivering real value to people in search of good housing they can afford.

“We buy well, we rehab beautifully, and we deliver value to the people on the receiving end,” said Robert-Ritter. “And it just so happens that we think it’s important, so we do it in places where the community is improved and folks can get a great product out of it.” 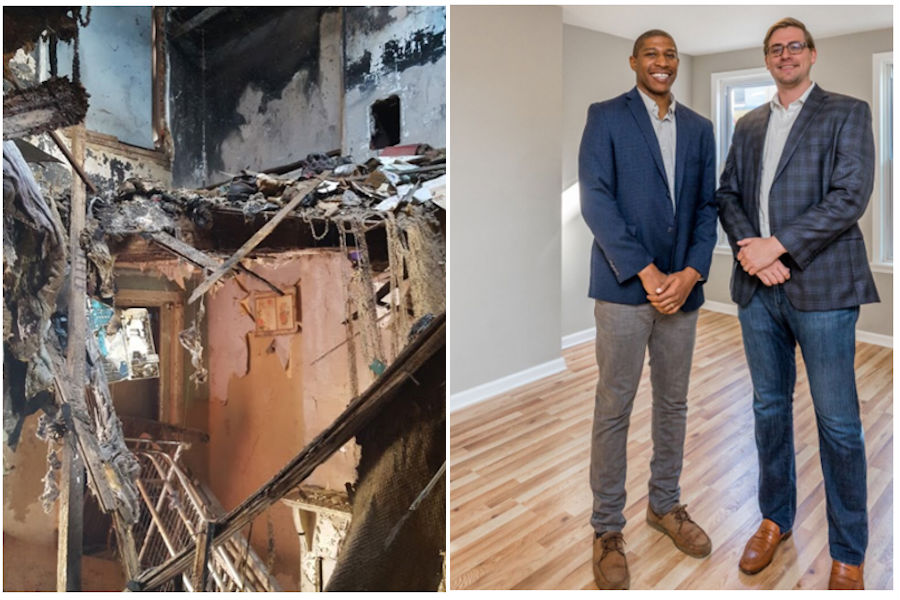 Left: One of the Bloyd Street houses as they found it. Right: Grimes and Robert-Ritter in the finished product.

“I had grown up in this area,” said Grimes, who played basketball on the neighborhood courts and for one year at La Salle before transferring to Columbia. “So when we met [with Weinstein], it just seemed like a no-brainer. He had the financial institution, we had the know-how of getting these buildings together quickly, and we had a great team of guys who we believed in.

“And we wanted to continue this growth process to continue to create jobs. It’s really about creating jobs and putting money back into the community.”

“For us, it’s less about real estate and more a relationships business,” said Robert-Ritter. “We think the most important thing we do is have a company that allows people to come to work and put in an honest day’s work for an honest day’s pay. It’s a situation where we can create jobs, and that improves the community.” Most of Bloyd Street Capital’s multicultural staff come from the communities where the company rebuilds.

The two describe themselves as startup entrepreneurs and development industry disruptors. And like so many other disruptors, they rely on technology to identify which properties to rebuild. They have to: Robert-Ritter says that for every deal the company makes, they analyze upwards of 200 to 300 properties at the outset.

Their work on their namesake street has already produced a ripple effect as other small-scale developers have come in and fixed up houses, including other Jumpstart alums.

“You’re starting to see the data support what our view was all along, which is that you have nice areas here. You just have to build [the homes] and the rest falls into place.”

The opposite of gentrification

The neighbors benefit too, Grimes said. “Somebody’s mother or grandmother lives on this block, and they have houses falling down to the left and right of them. Nobody’s taking care of the block, there’s no morale. We come in, and we might take her property value from $30,000 to $70,000. So our team’s work just made her $40,000 equity that she can go tap at a very low interest rate right now if her financial situation is set up that way.

While it may sound like the dreaded G-word, what the Bloyd Street boys do they see as its opposite. “We’ll get calls from people living across the street saying, ‘Hey, I’m moving out, can I move into your place?’” said Robert-Ritter. “And we’ll work with them. We’ll figure out a reasonable price point to keep them there because it’s important for us to keep stakeholders in the areas that we’re developing.”

A win-win-win for all involved

Grimes described their process as a win-win-win deal for everyone involved. The city gets a property back on the tax rolls, a resident gets a new home, and the neighbors get a better block to live on. And instead of squeezing every last cent of profit out of their projects, Bloyd Street Capital passes the extra value they create on to their buyers and tenants in the form of more reasonable house prices and rents.

And Bloyd Street Capital has ventured well beyond Bloyd Street now. They’re currently actively looking for and acquiring properties across North Central Philadelphia, in neighborhoods like Cecil B. Moore and Strawberry Mansion that are experiencing an influx of cheaply built homes aimed at Temple student renters. Their aim, however, is to build houses people will want to stay in for the long run, and to build them well enough for them to do so.

They also hope others will follow in their footsteps. “Philadelphia is only a start,” Robert-Ritter said. “The reality is, this model can be replicated elsewhere. We think this is a model that can not only be profitable but also create communities and create true value for the broader society we’re working in. And that’s really important to us.”