"North 5th Square" aims to mix things up in rapidly redeveloping South Kensington. The developer had kind words for the City Councilwoman who tweaked the project as well. 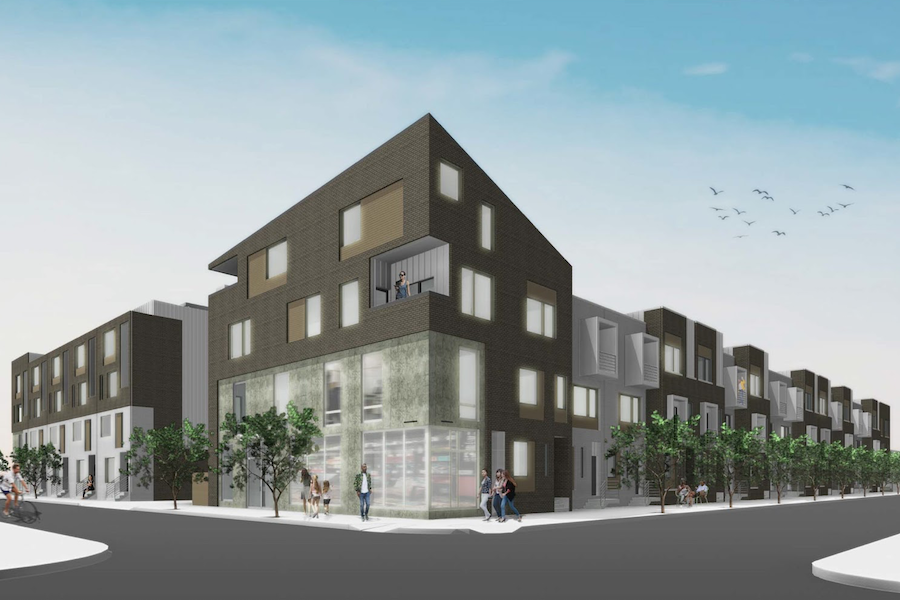 An early rendering of the North 5th Square project. A later revision has added street-level commercial space to the building at the left as well. | Rendering: KJO Architecture via RiverWards Group

That large vacant lot that at Fifth Street and Cecil B. Moore Avenue in South Kensington, most recently home to a circus school, is about to have a whole new act move in.

The RiverWards Group this week announced that it will build a 57-unit mixed residential/commercial development, North 5th Square, on the site. Construction is set to begin in mid- to late January, with completion set for late 2019.

The project, designed by KJO Architecture, will include 41 single-family townhouses, four duplex homes, two three-unit condo buildings and two corner buildings consisting of commercial space with a three-story residence above.

Not only will the project be mixed-use, it’s designed to be mixed-income as well. Sale prices will range from $199,999 for the least expensive condos to just south of $400,000 for the priciest townhouses.

A holdout against spiraling prices

RiverWards Group Co-CEO Mo Rushdy explained that his company is using the mixed-income, moderate-price model for this development because it wants to participate in South Kensington’s renewal without contributing to a price spiral. “Developers are increasing their prices, and landowners are also upping their numbers,” he said. “We don’t want South Kensington to go on fire in terms of land prices. When agents say they’re selling half-million homes [here], that’s unreasonable. We laugh when those numbers come across our desk.”

The development is not part of the city-sponsored “workforce housing” initiative, but it’s priced in accordance with its principles. Ten percent of the units — specifically, the six one-floor condos in the two triplexes — have price tags of $239,000 or less. “Those are our ‘loss leaders,'” Rushdy said. “We’re figuring our profitability based on the other 51 units.”

Green benefits for the neighbors too

The project will also deliver environmental benefits to its neighborhood in the form of improved stormwater management. The development includes a community park that will also be open to neighbors and double as a retention basin for stormwater runoff, the work of project engineer Ruggiero Plant.

“We’re taking about 10,000 square feet of street runoff from the surrounding streets,” said co-CEO Larry McKnight. “A quarter-acre of runoff will come directly onto our site and be retained to reduce the incidence of flooding in the area. This was a concern the neighbors had, and it’s something we wouldn’t have to do in any other development” RiverWards has done to date.

Some helpful advice from Sánchez

McKnight also had good words for the collaborative process that produced the final design, a process in which Councilwoman Maria Quiñones-Sánchez played a significant role. “She was instrumental in working with us on our design and coming up with a better one than we had going in,” he said.

Besides maintaining affordability, Sánchez was also concerned with enlivening Cecil B . Moore Avenue with commercial activity. “We worked it out so we could get in 5,000 square feet of commercial space,” McKnight said. Where the original design had only one commercial space at the 5th and Cecil B. Moore corner, the revised version includes street-level commercial space along the entire frontage on Cecil B. Moore. The two duplexes, each of which will occupy one full floor and one half floor, are located above the mid-block commercial space.

And, McKnight said, RiverWards took her mixed-income zoning bill as a starting point for its own plans. While he said that the company couldn’t make the project profitable with units priced below $199,999, it did address her other concerns in reworking this project.

Advancing the frontier and preserving affordability

Rushdy and McKnight do know the demand is out there: 11 of the units have already been sold in the pre-construction phase. Rushdy noted that buyers committing based on floor plans alone is a relatively recent development within the city.

The units can also be customized with the buyer’s choice of floors, carpet, shower tile, wall treatments, cabinets and plumbing fixtures. And, Rushdy said, “Larry or I meet with every one of our buyers before they purchase. We go over every aspect of our [building] process and we set expectations from the get-go.”

While the project advances the frontier of redevelopment in South Kensington, McKnight said that others are already staking their claim on land in its northern reaches: “You’re also seeing development going in further north now.”

RiverWards intends to continue working in this part of Kensington too. In the works is a 12-unit condo project on Sixth Street between Montgomery and Berks streets. Where theirs will differ from the others’ is in its affordability: “Some of the developers have numbers which are not buyer-friendly,” McKnight said, implying that theirs, on the other hand, will be.