An architect and his wife reclaimed this abandoned house in 2007 and recycled it into a striking modern-yet-traditional residence. 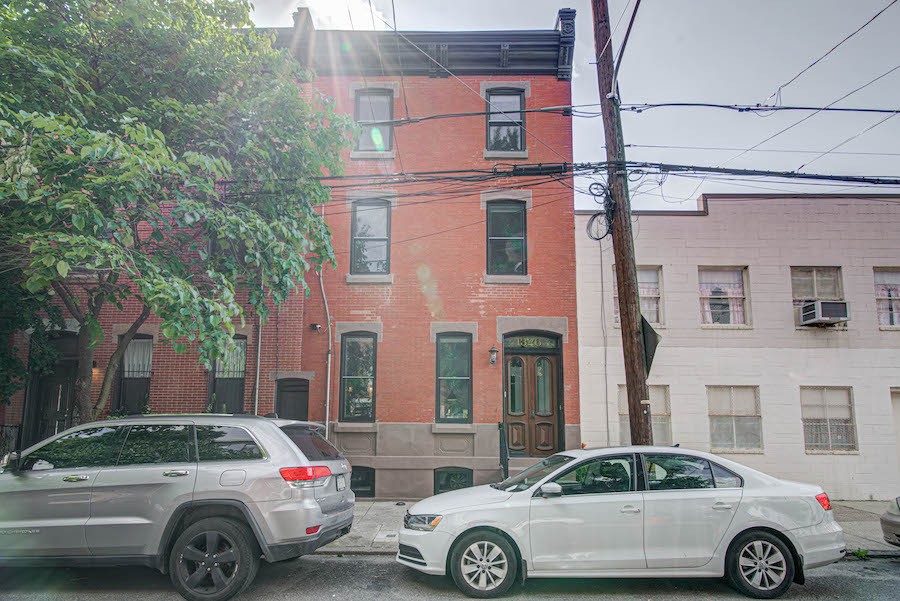 Not new construction, but renewed construction: a newly licensed architect and his wife became “early adopters” of a neighborhood in transformation when they bought this shell in 2007. Today, on the inside, 1326 N. 4th St., Philadelphia, PA 19122 is a stylish modern house that has at the same time kept its traditional soul alive. | Photos: Chris Rivera via The Somers Team, Keller Williams Philadelphia

South Kensington, one of Philadelphia’s first “industrial suburbs,” retains a large chunk of its industrial character and heritage. But it has also benefited of late from the wave of residential development and redevelopment that has washed over neighboring Northern Liberties and Fishtown. All over its southern reaches, new apartment buildings and townhouses have sprouted where workshops once stood. But, as with every residential revival, there are pioneers who got there ahead of the crowd.

Architect Chris Colgan and his then-wife Julie Tice were a couple of those pioneers. They adopted this neighborhood in 2007, before it took off, buying a damaged abandoned house on North 4th Street with the aim of spending the rest of their lives living in it. And to turn it into their forever home, Colgan, who had just gotten his architect’s license, began rebuilding it himself.

Of course, plans get upended all the time. The two are no longer married, and now that they have decided to turn the page on this chapter of their lives, they are ready to bequeath to you this striking, modern-yet-traditional South Kensington renewed rowhouse for sale.

Truth to tell, this house is closer to new construction than reconstruction. That’s because it was really even less than a shell when they bought it: Squatters had set fire to its first floor, causing serious damage.

So what Colgan did was tear it up, recycle what he could, and rebuild it from the ground up. These pictures show you the result.

Judging from the pictures, his maiden voyage as an architect was a smashing success. The house retains just enough of its 19th-century elements to remind you of its roots, but in general, this is now a strikingly modern residence. 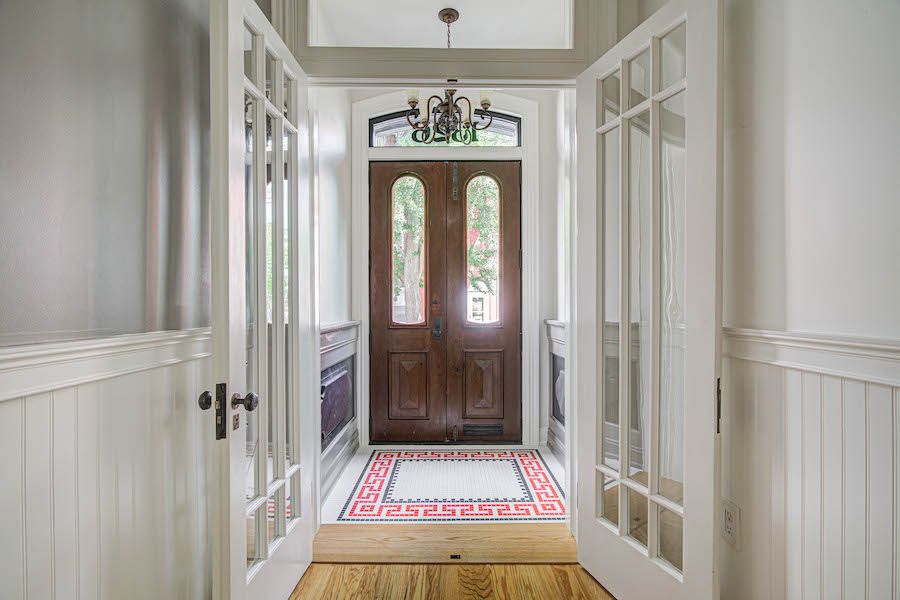 One of those 19th-century elements that got preserved is its vestibule. A purely modernist house would lack one completely, and a modernized one would not have the batten-board and patterned wainscoting that this house’s vestibule and foyer have. 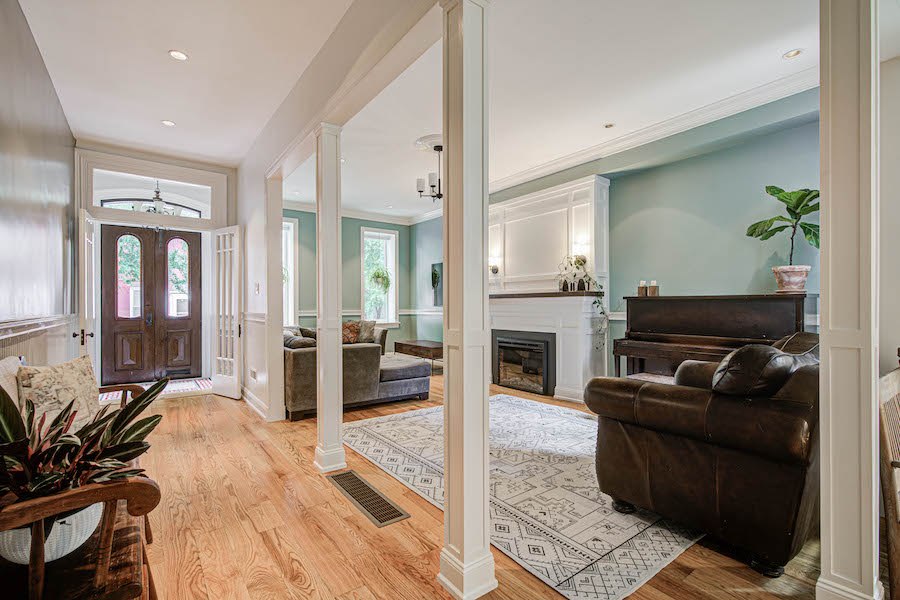 The adjacent living room, framed by columns and with a stripped-down traditional mantel surrounding its gas fireplace, likewise retains much traditional character. (That mantel, by the way, was constructed from wall studs salvaged from the 2007 demolition of the old interior.) 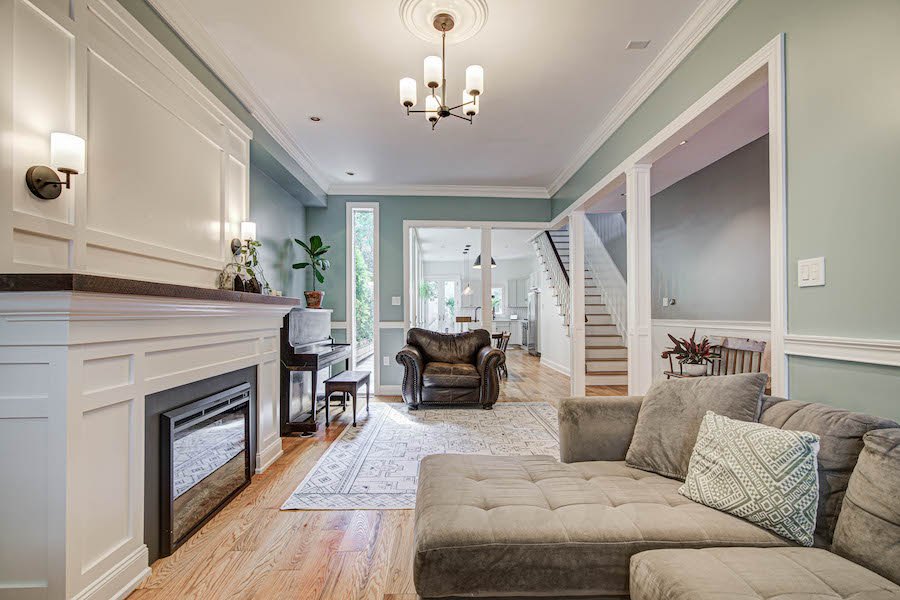 But it’s also part of a completely open main floor — one whose other traditional element is the original staircase leading to the second floor. 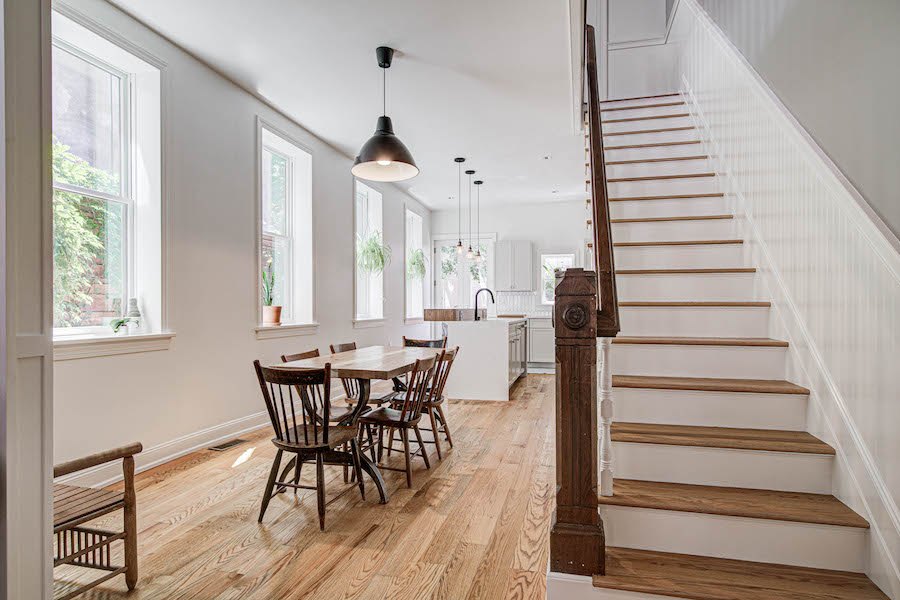 Otherwise, the dining room next to it and the kitchen behind that space have the clean lines of modern design. 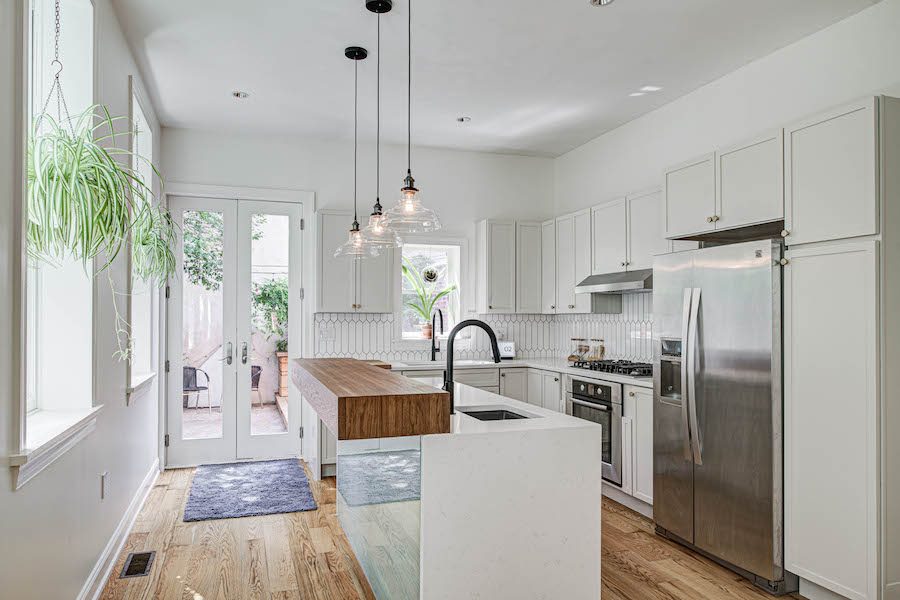 The kitchen takes its cues from modernism and one of its predecessors, Shaker design, which influences its cabinetry. Note, however, the substantial butcher-block bar countertop on its island. Like all the other woodwork in this house, Colgan produced it himself in the woodworking shop he installed in its basement. 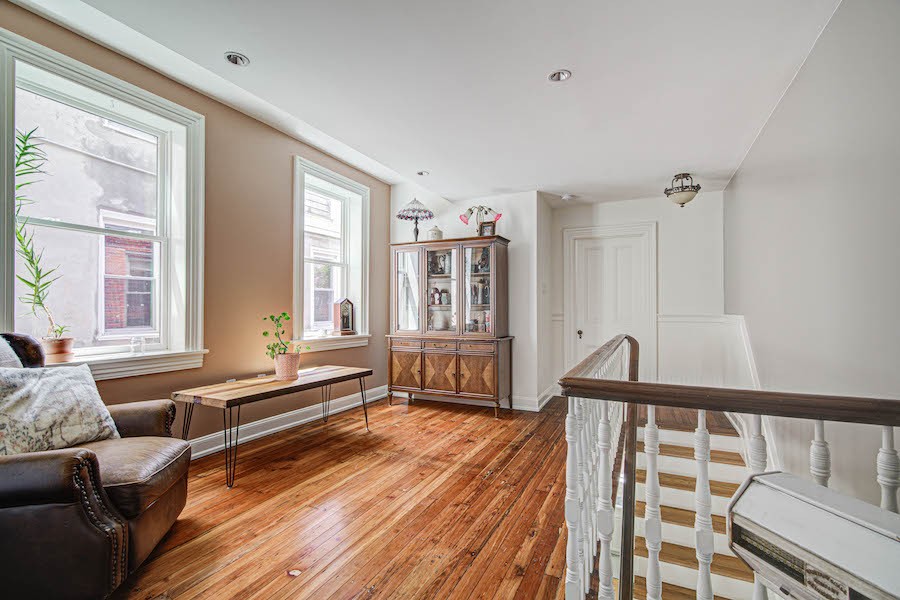 He used reclaimed undamaged wood flooring to repair hardwood floors that had been damaged. He also used the old servants’ staircase at the back of the house to replace the damaged original staircase between the second and third floors. A sitting area sits at the top of that reused staircase, outside the primary suite. 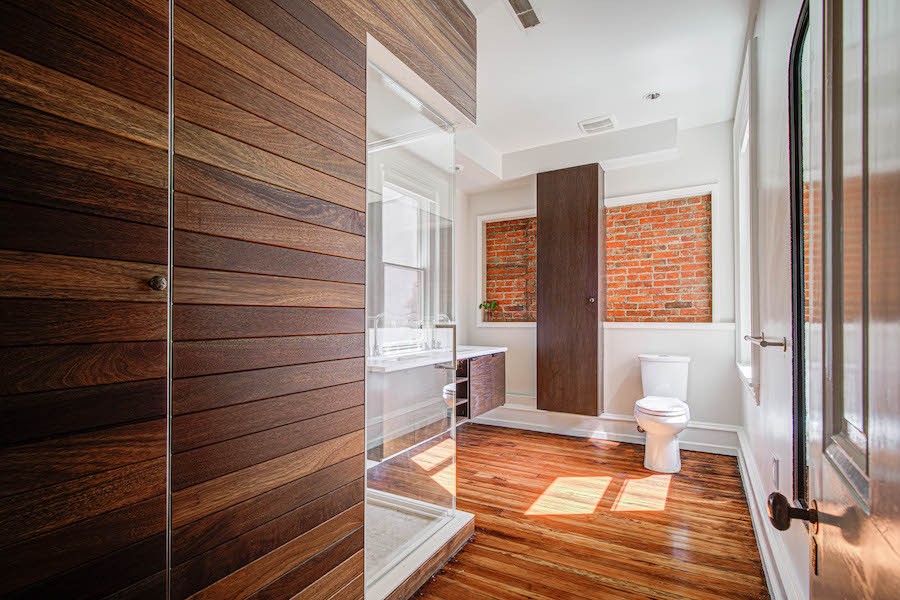 The new bathrooms are the most purely modern elements of the house. The hall bath on the second floor boasts an exposed brick accent wall, a floating dual vanity and a frameless glass stall shower. Note how its recycled and refinished hardwood floor sparkles.

Two of this house’s four bedrooms have large walk-in closets featuring shelving made with more of those salvaged studs. The one in the primary bedroom also has an exposed brick wall. 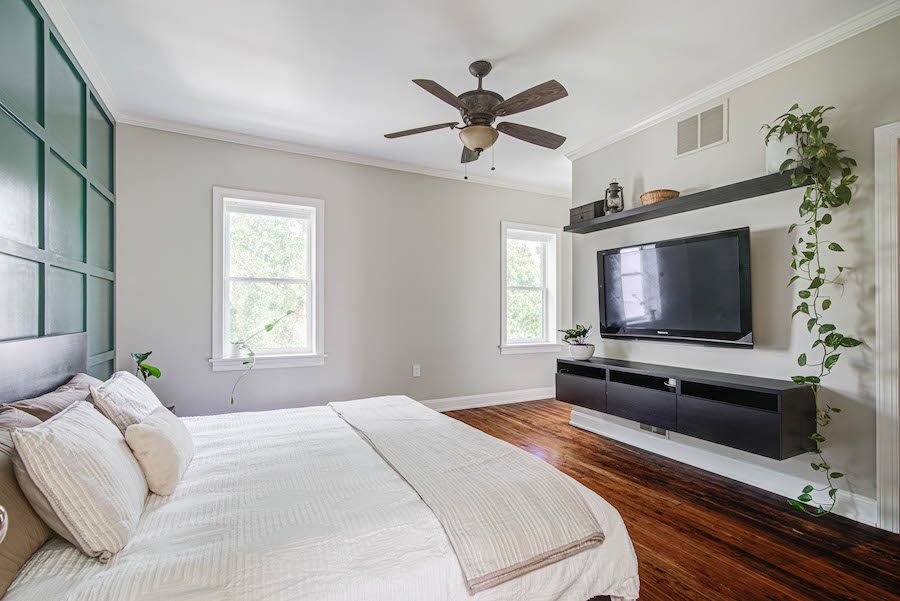 The primary bedroom itself features a painted wood accent wall and a custom floating bureau and built-in shelf. 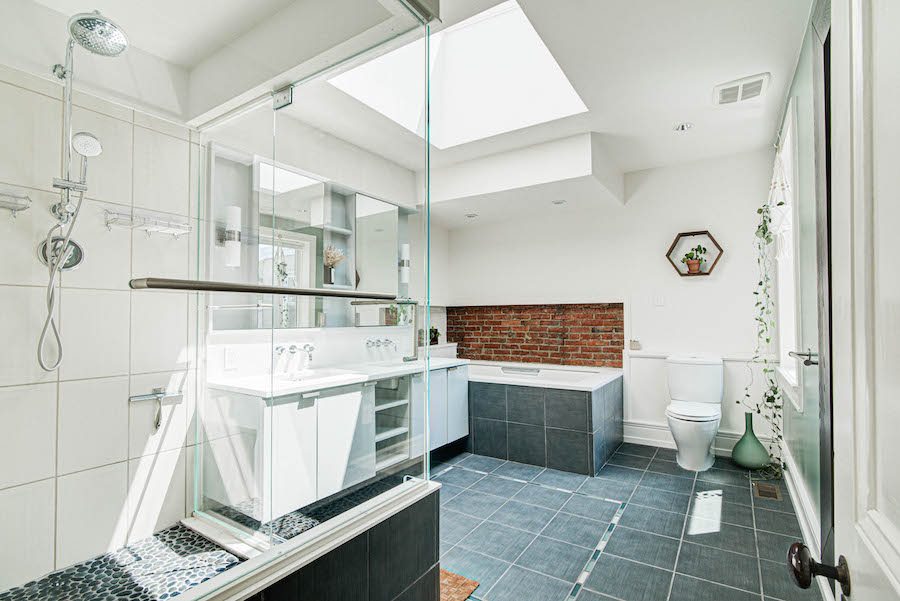 Its skylit bathroom has a slate tile floor, its own brick accent wall and a white floating double vanity between its large walk-in shower and its soaking tub. 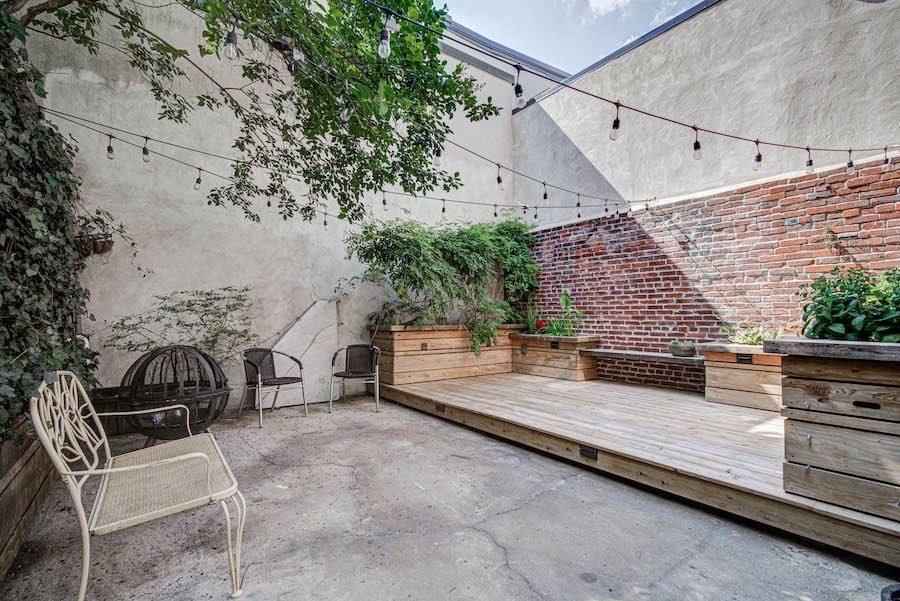 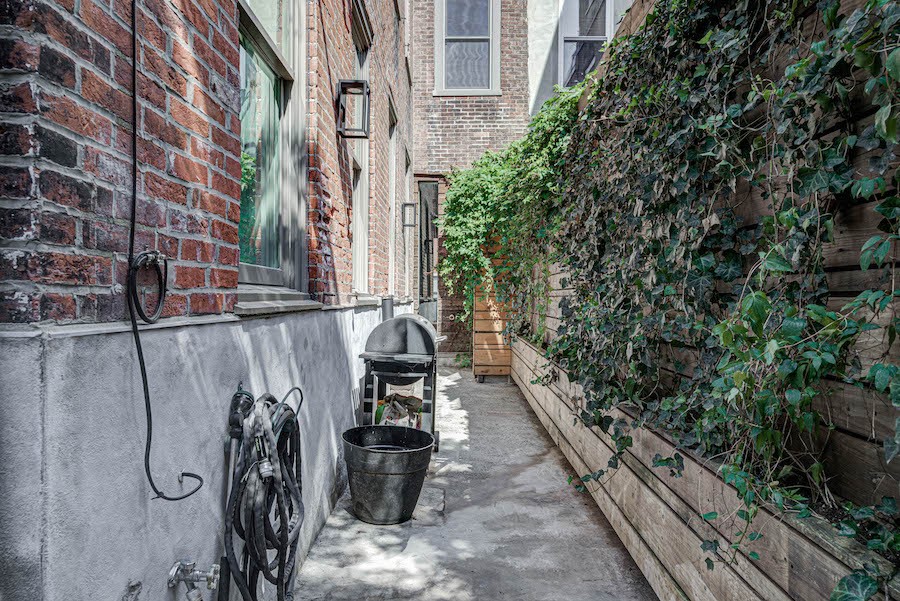 This house also has two outdoor spaces. The patio behind the kitchen and the side alley next to it that leads to the original delivery entrance have an elevated deck and privacy fence fashioned from reclaimed wood pallets. 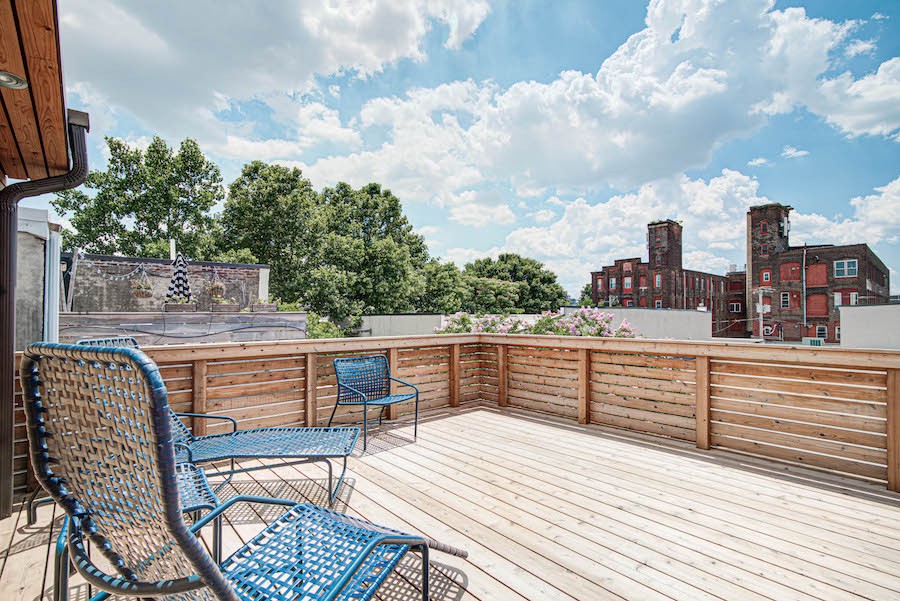 And the roof deck behind the primary suite is made of cedar installed by hand by Colgan.

So what you have with this South Kensington renewed rowhouse for sale is a one-of-a-kind, sustainably rebuilt, stunning architect-designed house that has evolved into its current form over the course of the 15 years Colgan and Tice have owned it. And now this stylish, conveniently located labor of love can be yours.

OTHER STUFF: Of course, all of this house’s systems are brand new, including its dual-zoned climate-control system. The partly finished basement contains the laundry and a second fridge as well as that workshop.